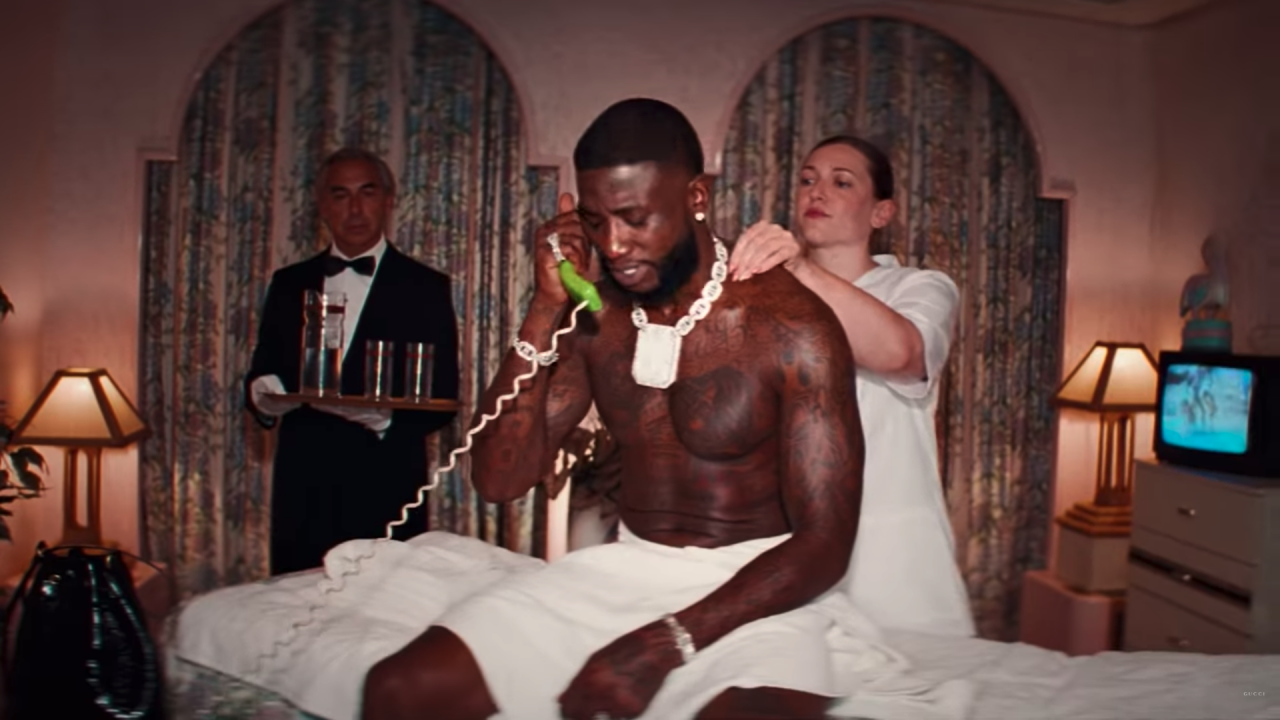 At the end of F. Scott Fitzgerald’s “Winter Dreams”, a man named Dexter Green looks back upon his life. “‘Long ago,’ he said, ‘long ago, there was something in me, but now that thing is gone. Now that thing is gone, that thing is gone. I cannot cry. I cannot care. That thing will come back no more.’” For many years Fitzgerald would continue to write of lost youth, and what happens when the party fades away and with it your hopes; but what if the party never ends and the morning after never comes? If you could have another chance at those things you’ve always wanted, and go back to a place where the door’s always open, the ice swans not yet melted, and the pool still so warm and inviting?

The latest Gucci campaign takes us to the party in Alessandro Michele’s mind, where the 1970s never ended and the only phones are landlines and we’re flying hand-in-hand through Giorgio Moroder’s electric dreams.

Rome’s Villa La Furibonda bustles with an unlikely guestlist: Gucci Mane (nobody’s quite sure, or at least he’s never let on, where exactly his stage name came from, but it may well have little to do with the Italian fashion house and rather derive convolutedly from Southern slang for “vagina”; either way, from here on let’s call him “Guwop” for the sake of clarity), Iggy Pop and Sienna Miller, plus an assortment of socialites, countesses, artists, and priests all dancing around or serenading one another with guitars and violins. Here’s the floating world shot by Harmony Korine. A world that never quite existed, like all of Korine’s worlds. He’s selling us a dream; one that brings to mind Fitzgerald, or Paolo Sorrentino’s The Great Beauty (2013), which my friend Clive would tell me was the greatest opening scene around, or any of those other great parties that never really were.

The American man at the lavish celebration in Rome could be a scene from a hundred years ago. This is what America means to me, if it means anything: a promise that all of your dreams will come true. That the world is yours. This is what’s sung in every rap of selling coke on those corners, always on those corners, chasing your dreams; what’s acted out repeatedly in more slowly unconvincing tones and dissonant soundtracks in the drawn-out narratives of prestige television boxsets concerning the lives of conflicted, amoral father figures with secret histories; and written out in long captions under sensual self-portraits taken on phones; and sent up and down the catwalks twice a year; and displayed in massive galleries in Chelsea held in polished stainless steel like Chalcolithic bodies in the ice: the world is yours. Yours! And sure it’s all lies but still, I don’t know how to believe in anything else.

I went to a party like this party in the video once and danced to trap among the Jenners and the supermodels and Derek Blasberg, and drank champagne, and even had sex against the outside wall of the Grand Palais. Which didn’t make me happy. But when I happen to pass through that side of Paris, I like to go have a look at the patch of yellow wall behind that particular bush and remember a different time in my life. Like Dexter with his Winter Dreams perhaps. I was also in a Gucci campaign myself once – like Guwop, kind of – back when I was living in Los Angeles with Ed Fornieles. We spun a whole world in three frames. I was a cartoon platypus, consumed by delusions and longing, taking a rabbit named Yumi out for a night on the town. But again, it’s just art, it’s just advertising, it’s nothing real.

A scene from this new campaign, of Guwop on the massage table in his towel taking a call, is also used as the cover art for his forthcoming album Woptober II. Though more often quoted as saying the opposite, Fitzgerald would eventually come to believe that there were second acts in American life; and Guwop, Gucci Mane, is one of this decade’s great resurrection stories. In the early 2010s he suffered a very public breakdown. The signs were there for all to see. A large ice cream cone tattooed across his face; a darkly compelling meltdown on Twitter in which slander flowed out of him like a spring of pure content; a terrible cough syrup addiction that began to overwhelm him in 2013. That summer he released probably the most vulnerable, on-edge trap song ever recorded, “Hell Yes”, which was decorated by sad falling melodies like washes of evening rain down the windows and described by FACT as having “holes you can see the void through”. By Christmas he was in jail on firearms charges. And then …

A year later, when he came home glowing with health, he’d changed so much that a popular conspiracy theory suggested he’d been cloned by the CIA in prison for reasons that remain unclear (but there are no whistleblowers coming forward to talk about that). Now he’s the face of Michele’s Cruise collection and the life of his party; not so much the poor jester as the jolly old father figure. “Guwop,” remarks one of the YouTube commenters, “the only sane one.” In a world full of chancers and clowns, the man with the ice cream cone on his face is the picture of reason. To cast Gucci Mane in a Gucci campaign is to look around you and say, “All of this? It’s not real.” We’ll never find the Great Beauty in our lives because it does not exist. But we’ll always be surrounded by pictures of the great party that never ends and never starts, somewhere up there in our dreams.

DEAN KISSICK is a writer based in New York and Spike's New York Editor. A new instalment of The Downward Spiral will be published online every second Wednesday a month. Last time he wrote about his swimming encounters and the dream of a never-ending summer.