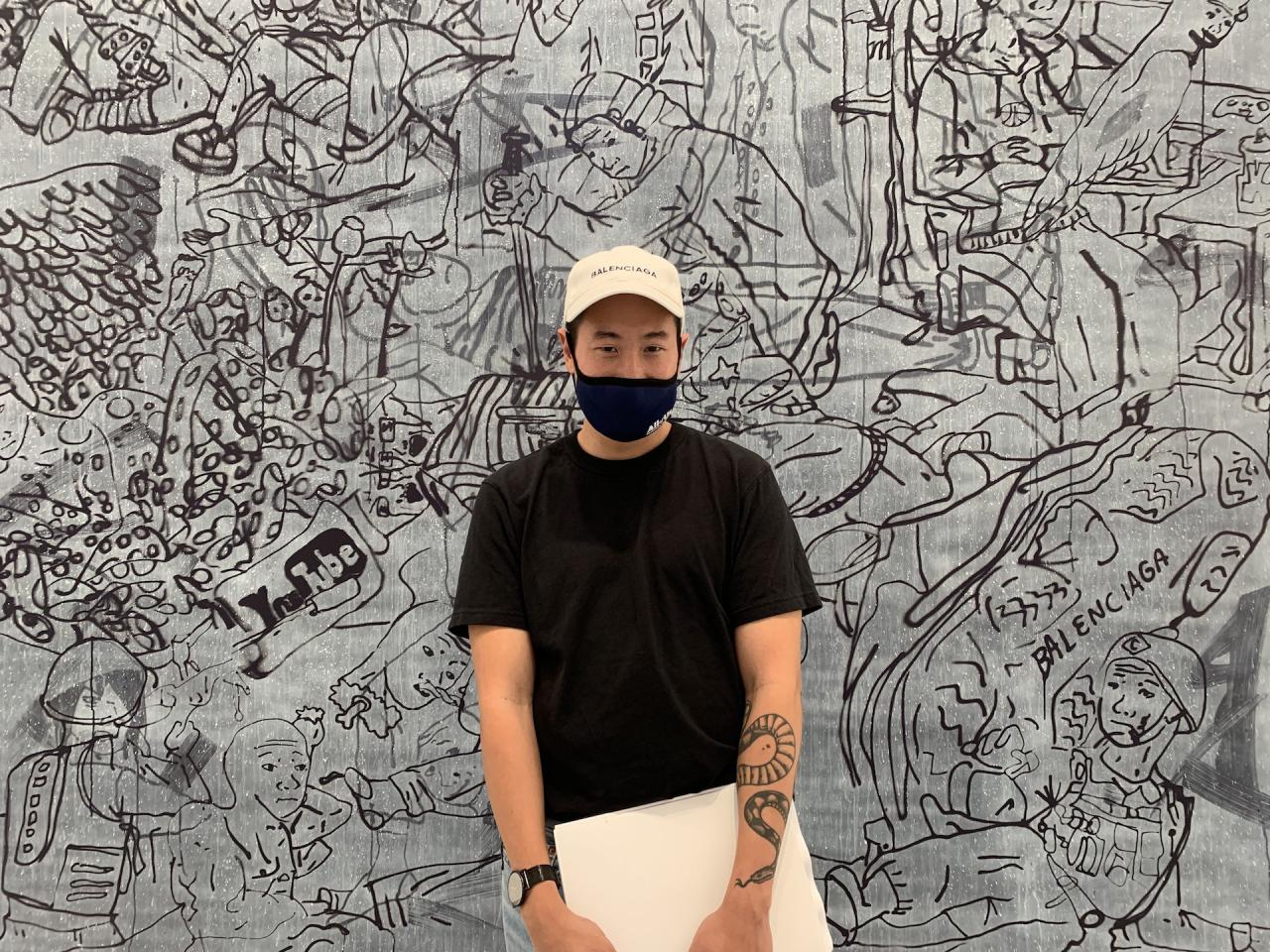 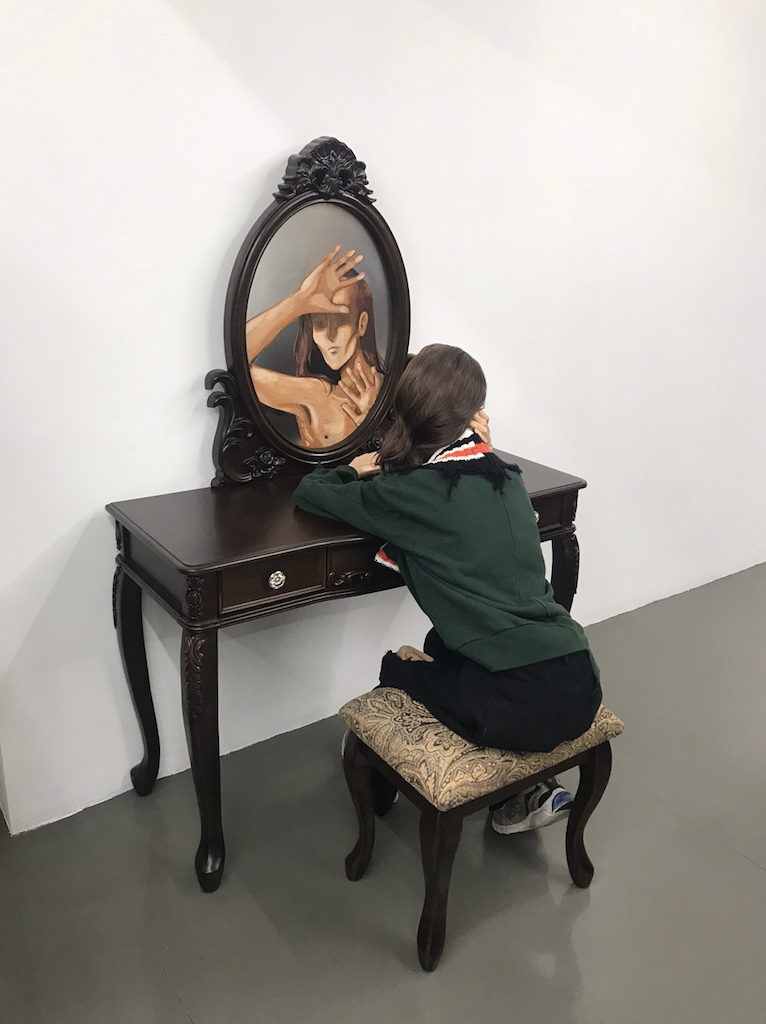 An unspoken rule in the art world is that you don’t ask people what they do or how they know someone. You’re supposed to just figure it out, or wait for it to come up as some side detail.

Here are my side details: I’m a writer and I met a lot of people on the internet. Dean Kissick is someone I met on the internet. I happen to partly know what Dean does for a living: he writes copy for a furniture company. But that’s not important. Dean is the perhaps most name-dropped person in NYC. The vicar of Dimes Square. If I didn’t know better, I would have thought Dean was entirely an internet phenomenon, a simulacrum with no original – a byline, an Instagram meme, a podcast guest, but not an actual person – had I not seen him, live, wearing a colourful knitted vest, at the Ian Cheng opening at The Shed, accompanied by a thin blonde girl with dark eyebrows, and while I don’t know how they know each other, it’s important not to ask.

“We need more writers like you”, Dean says to me gregariously, after I say I’ve just moved here to study journalism at NYU. He tells me of the vibrant literary scene downtown, a crop of alt-lit descendants fond of Twitter and critical theory who have largely eluded the Ivy League bobbleheads uptown, who think of social media as a baby tiger best left alone. There are few success stories: Honor Levy landed a short story in the New Yorker; Sean Thor Conroe signed onto ICM and sold a novel to Little, Brown for a reported $200,000.

A certain Sam Pink is pretty pissed about this. Says Sean ripped off his style, Dean tells me. “It’s been a good summer for literary controversy”, he adds. I heard a journalist at the Intercept recently say that all journalism is gossip journalism, which, from him, can span from secret documents about Russian cyberattacks to a blog post alleging that if somebody from the scene sells a $200,000 book deal, he can no longer call himself “indie”.

Except I don’t really know what “indie” means anymore. As a former ad man, I know to distinguish market categories by indie, subculture, counterculture, and the underground, which is distinct from aboveground, which is distinct from the mainstream. If you’re looking for subculture, you’ll mostly find it on Discord, where I spent a lot of my time during Covid. A group of ten and I – people I met in various servers on the ‘cord – are in what I refer to as the “theory bro group chat” which comprises mostly Mark Fisher bros, and my editor at The Guardian who fucks with the scene.

cults are going to be the dominant paradigm of the next generation... Internet people are pro-NFT, anti-AOC. Like, maybe DAO is another word for the panopticon, but let’s make it fashion.

A couple of the theory bros are at the Ian Cheng opening. To hang out with internet people is to accept that you will never know what’s going on. Internet people toggle through scenes, histories, and hot takes like tabs on a browser. My favourite Marxist is a superlancer web developer named Ian who lives alone in SoHo and is now telling me, “I lost so much money last year on crypto that I can write it off on my taxes”. Kane, an extremely online strategist whose face has the unsettling likeability of a Disney cartoon, says that cults are going to be the dominant paradigm of the next generation, and I don’t disagree. Internet people are pro-NFT, anti-AOC. Like, maybe DAO is another word for the panopticon, but let’s make it fashion.

In between galleries on Friday, I run into the writer and artist and resident internet personality Paige K. Bradley, whom Kane has dubbed as having “the best fashion in NYC”. Paige, I met years ago on Twitter, back when she was an editor at Artforum, and we both fell into the New Models scene on Discord, where her hot takes have the cavalier chic of someone who always knows what’s really going on.

Because the Julien Ceccaldi opening was divided between Jenny’s and Lomex in Chinatown, the scene is split between people texting their friends at the other gallery to ask if it’s better.

While Paige heads to Lomex, I end up at Jenny’s, where the best-dressed person in the room is the writer Taylore Scarabelli, with her shimmering silver eyeshadow. Skipping out on the Eckhaus Latta show after refusing to pay for a fashion week surge-priced Uber, she says the worst part about gallery openings are the fluorescent lights. And I suppose the best part about fashion shows is that everything’s over in fifteen minutes.

Coincidentally, I had spent the last month working, for this magazine, on what happens to be the longest critical text on Ceccaldi’s work to date, so I have been going around town joking that I am the leading Ceccaldi researcher in North America. When I actually meet Julien at Jenny’s, I’m just a charming stalker, like, Hi bb I know everything about u.

He says in his French-Canadian accent, “I wanted to do a show with less sex”.

“Do you think the sex stuff is harder to sell?”

He gives it a thought. “I actually have no idea what goes in in the buyer’s head”.

Outside, I find Paige and her boyfriend, Domenick Ammirati, and we go to a vegan Chinese restaurant for dinner. Domenick has an easy smile that looks like it feels good making it. He also writes for Artforum, and so the three of us actually do talk about art the entire dinner. We decide after everything we have ever heard about Dash Snow, including a documentary Domenick recently saw on him, that the artist was nice to his friends and mean to people he didn’t know. On Semiotext(e): their books have chronic typos but we still love them. Louise Bourgeois: Amélie-adjacent. Over dumplings, I discover that I like hanging out with couples, and I think couples like hanging out with me. Intimacy breeds contempt, but in the presence of an open witness, a pair is occasioned to perform what makes them unfamiliar, arresting, and witty, thereby redemonstrating to each other, as if by surprise, their charms and eccentricities.

Later, the entire downtown art world, it seems, deigns to Forlini’s for the afterparty hosted by Jenny. I recognize people I’ve only DM’ed with on social, except I can’t tell if it’s them or someone who looks like them. Julien is sitting huddled in one of the back booths, waiting for people to come up to him and not the other way around. Paige, whose hair colour of the season is platinum blonde, has a masculine habit of delivering fully-formed set pieces in conversation, and they’re not meant to be interrupted, you just listen. Whenever she says, “This is very contemporary”, I lean in and pay attention.

She mentions Dean Kissick, who was also at Lomex earlier, and has lately become an internet meme. A post on Instagram with his face colour-inverted on Photoshop bears the words, “I’M OBSESSED WITH BLACK DEAN KISSICK” which is the kind of humour you’ll find in these corners. When she’d asked him once how it feels like to become a meme, he said, “It’s scary but I also like it.” Anonymous accounts like this have popped up recently, with nonsense block text that are half about Heidegger, half about God. Paige, who also does research on the QAnon cult, says, “This is very now”, and I pay attention.

Sometimes I think all my social success in life has come down to a single trait: being comfortable with sitting down by myself at a party

As the night winds down, Domenick gets a DM from the writer Kaitlin Phillips, saying that Christian Lorentzen is throwing an impromptu party at The Dancer in the Lower East Side. Kaitlin may or may not be there. Domenick and Paige are going home, but I’m feeling hopped up on the zeitgeist and decide to crash the function. When I arrive, I know zero out of the ten people milling about the narrow hallway of the bar. Kaitlin is not present. But also, I’m kind of like, how different can this be from Twitter, where you just start talking at random people and pretend like you’ve been in the conversation the whole time? I decide to introduce myself to the host. “Are you Christian?” All I’m offering is, “I’m a journalism student at NYU”. When he responds, “Oh I don’t know them”, I know this isn’t going well. I start spewing stuff about my professors until he sighs and says, “We’ve got a lot of friends here”, definitively closing out the conversation with a sweep of the wrist towards the back of the bar, and I am promptly dismissed.

Sometimes I think all my social success in life has come down to a single trait: being comfortable with sitting down by myself at a party. I don’t check my phone. I look out into the middle distance. People think everyone notices you sitting alone, when in fact, people forget you’re even there. I take a seat at one of the booths and observe. It occurs to me that I have never seen anyone wear a tweed blazer in New York except at a literary party. I like to think that a writer is always the first to arrive and the last to leave, and so I decide I might stick around and wait for something to happen. But here’s the thing: sometimes you arrive for a story and there is no story. All detail, no point. You do all the work, show up, but nothing happens, and you gotta know when to call it.

I wait for an event to happen, and then wait some more. After a while of this, I go home.

GEOFFREY MAK is a writer based in New York. Read his portrait of Julien Ceccaldi in SPIKE #69 – STORYTELLING, available in our shop.

7pm is a new column where writers in Spike’s orbits spread gossip and stalk their city’s scene.