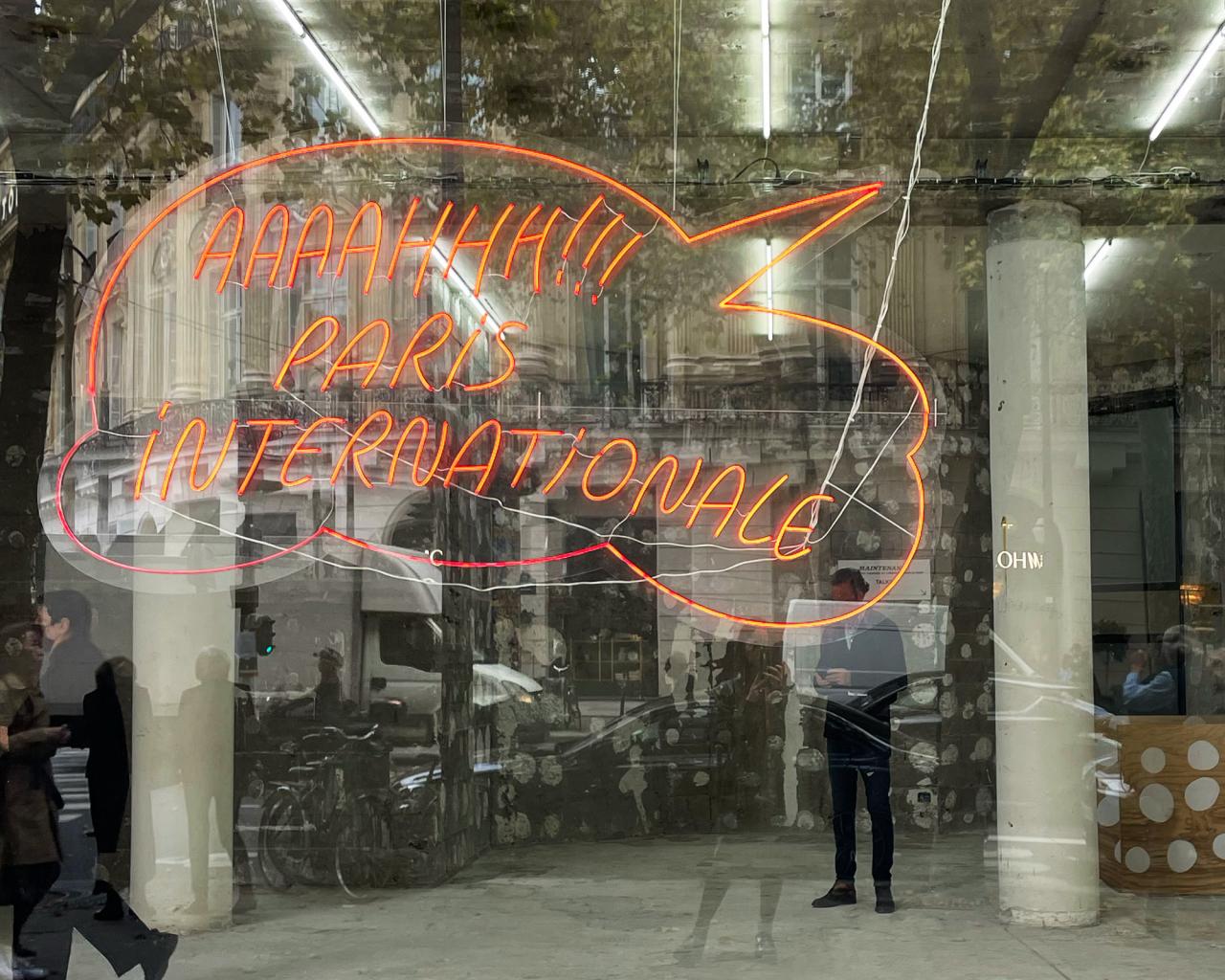 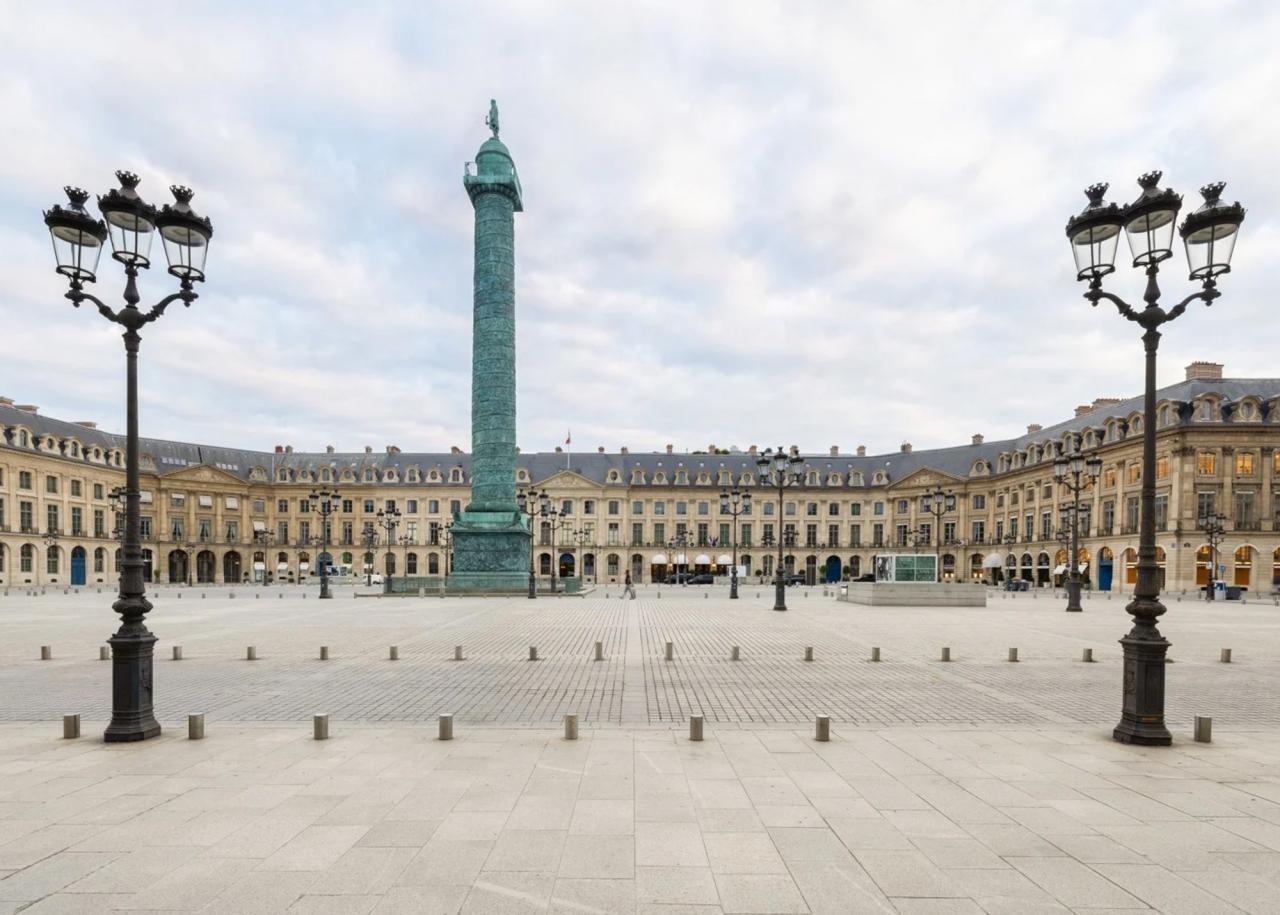 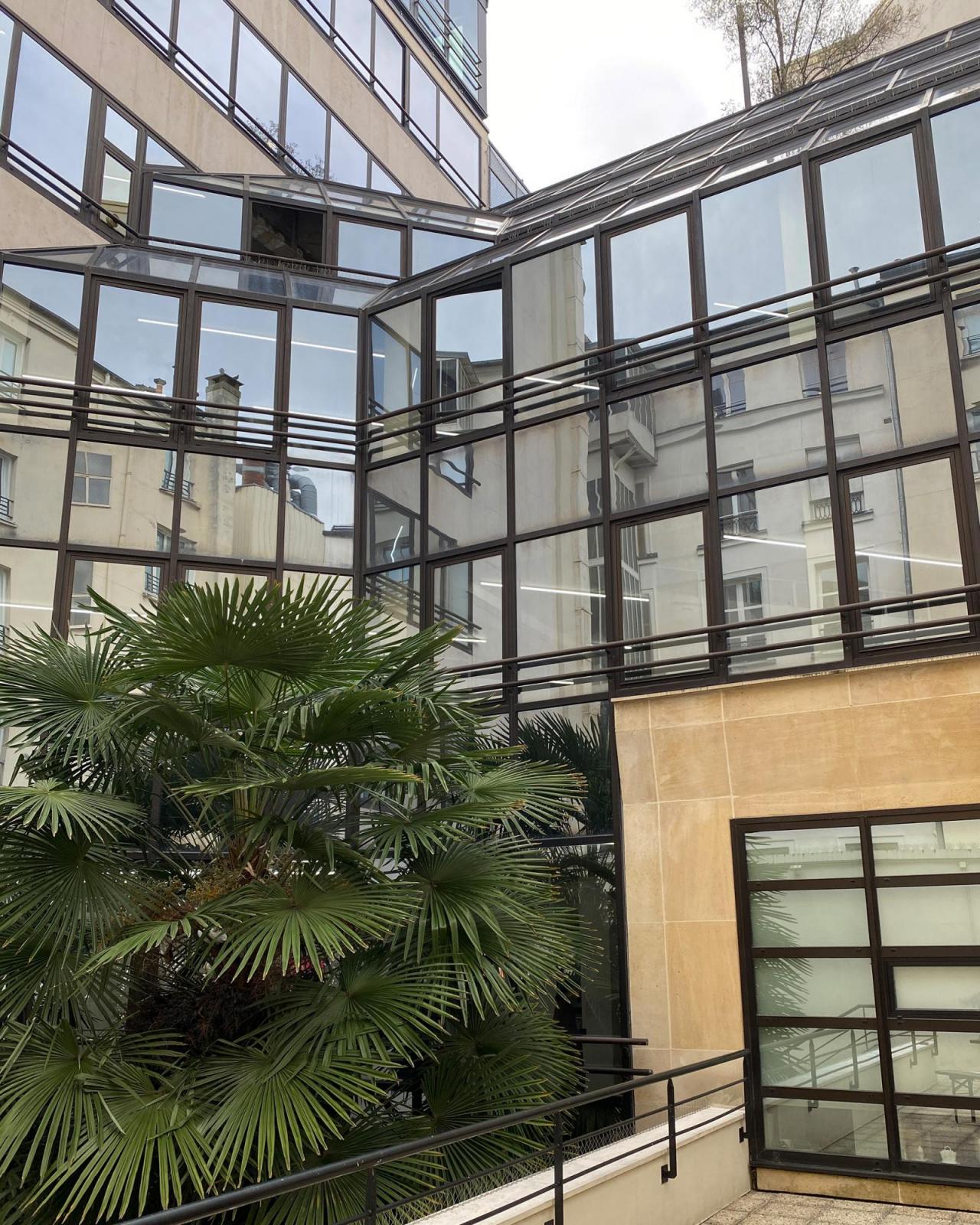 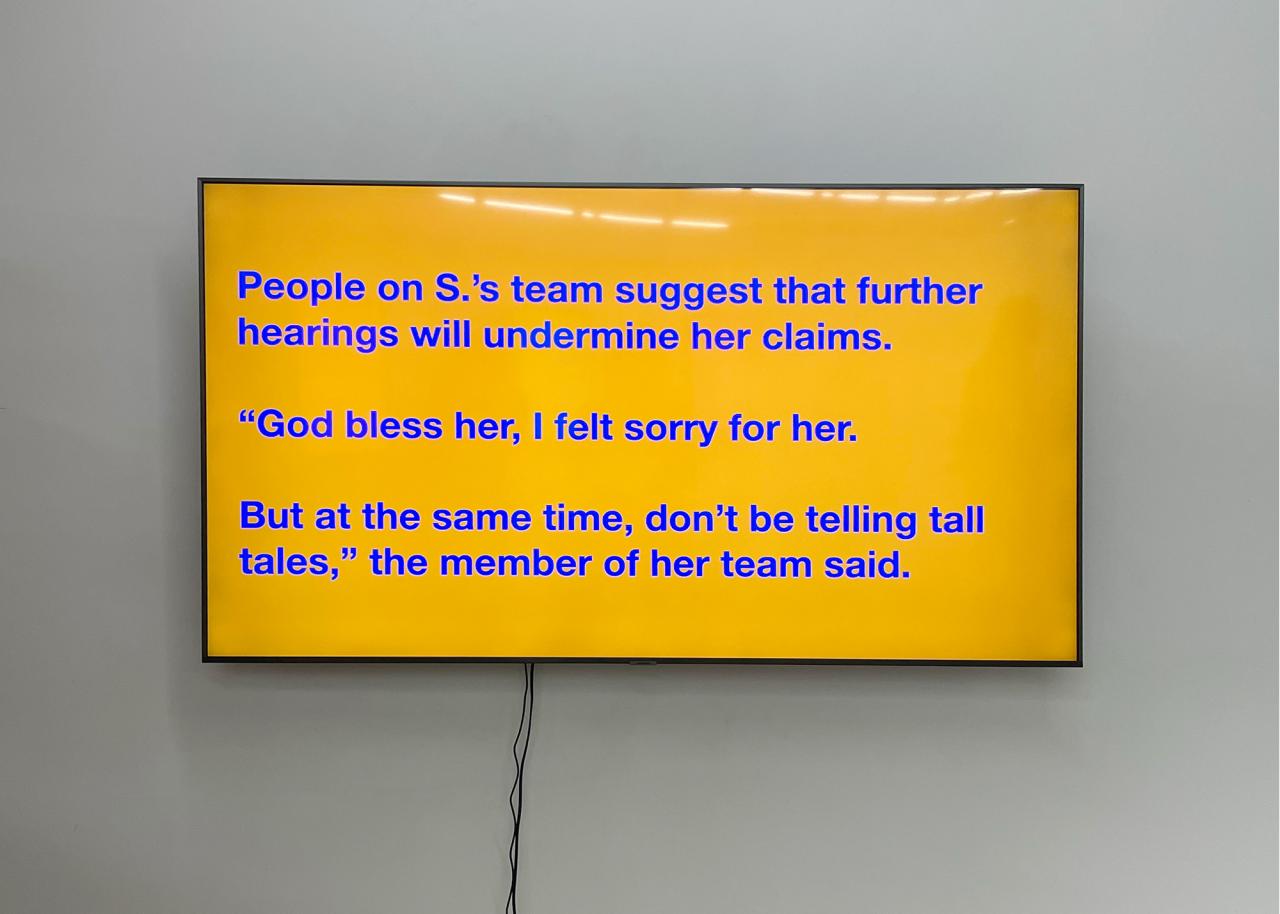 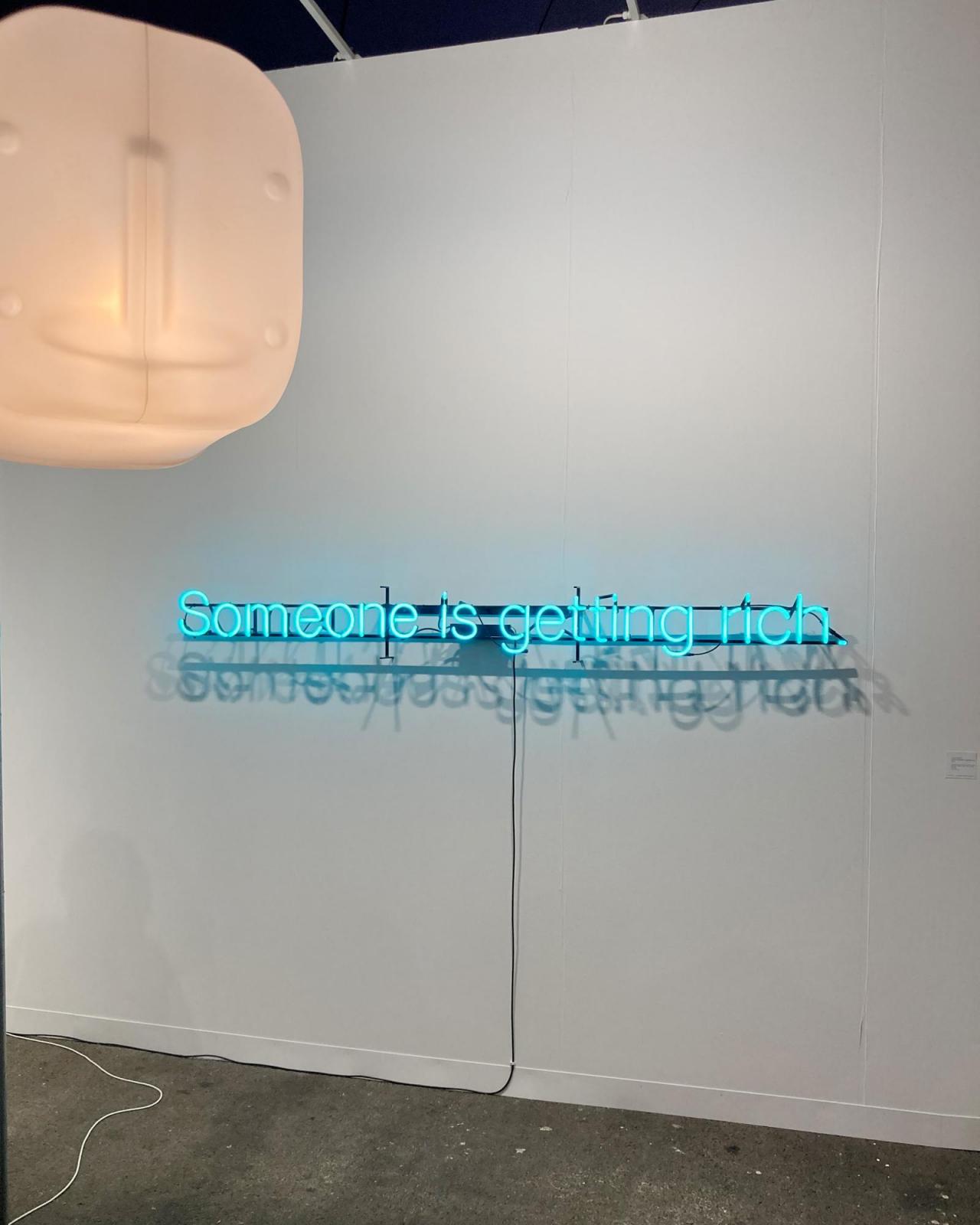 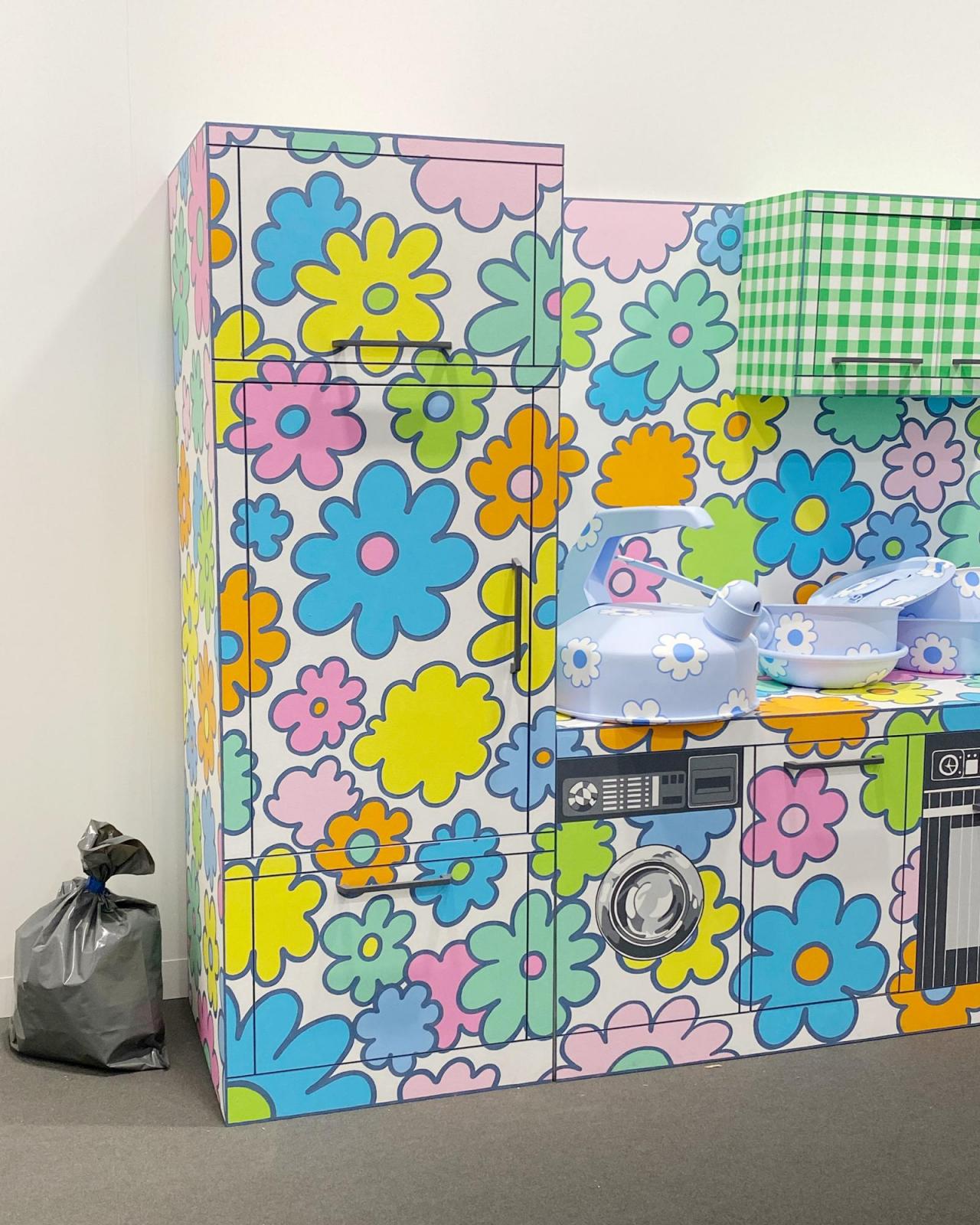 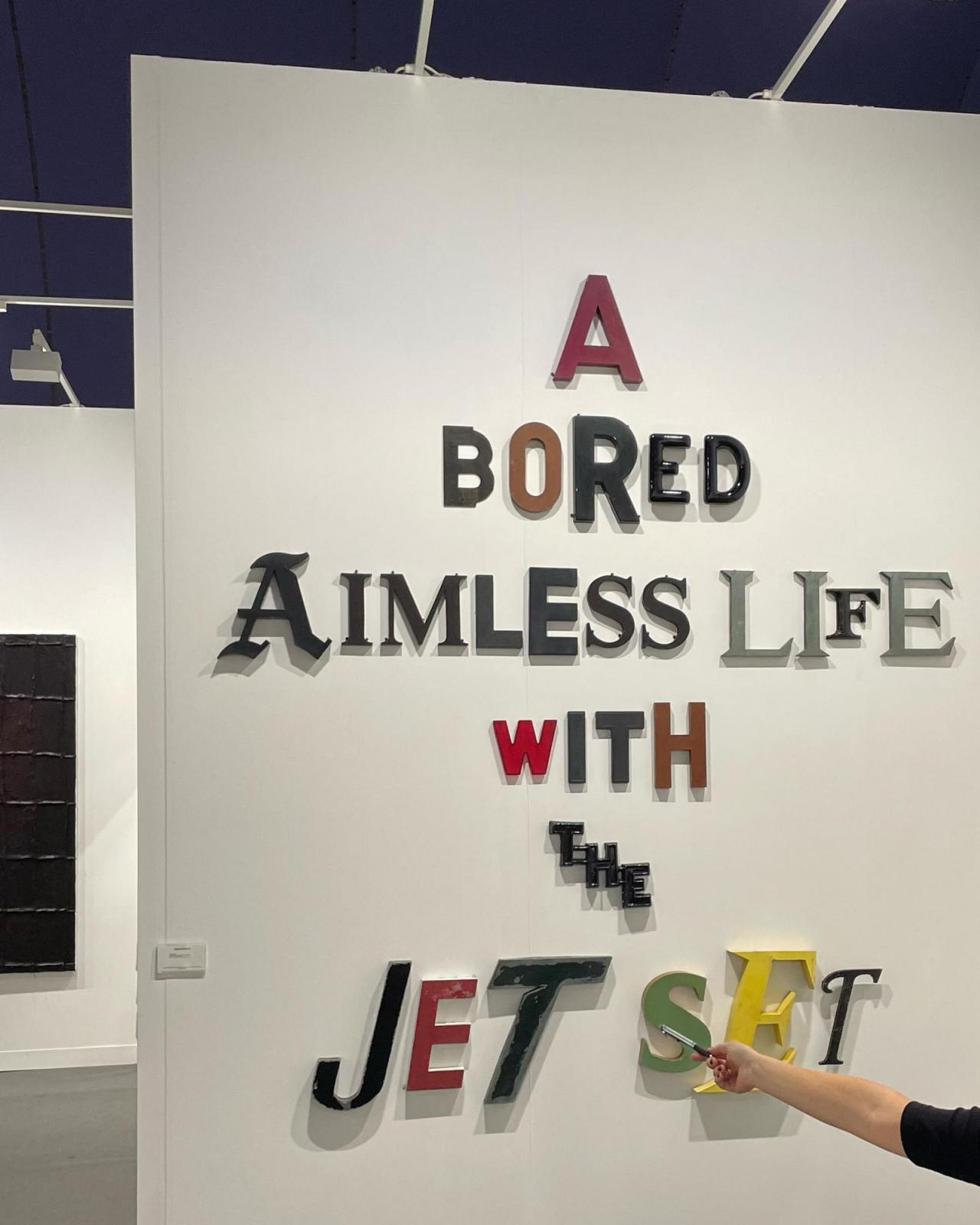 Glocal simulations and works full of text abounded in Paris during the 2022 art fairs. What is that plus that hovers above the city? It may have something to do with our fear of ambiguous images.

Any art fair feels like a simulation or a layer on top of the world. Especially if it takes place in the city where you live, and if that city happens to be Paris. And instead of taking a neutral acronym (R.I.P. FIAC), the new agenda-setting fair is named “Paris+ par Art Basel.”

During the third week of September, Paris was, indeed, “plus,” if only judging by the way in which French-ness had been cranked up to the max. Global is out, glocal is back. Like in a Metaverse, everything that week was a bit more extra, a bit more pristine, and above all, a bit more typical – according to what an areopagus of branding experts would perceive to be so.

My first encounter with the meta-city was at Place Vendôme. A non-place if there ever was one where any remnant of Gustave Courbet toppling the eponymous column in 1871 has long been glossed over by advertisements for luxury shops. The square was formerly home to Coco Chanel, the Countess di Castiglione, and a handful of Jean-Michel Basquiat’s ashes. Since this autumn, it also hosts Esther Schipper’s new space, tucked away on the second floor of number sixteen (ring next door for the Ritz). “A big public inauguration was out of the question, as the queues for the shops were already too long everywhere,” a Schipper representative told me about the secretive opening of their first show with local sculptor Étienne Chambaud.

Paris Internationale opened on Tuesday, a day before the Swiss plat de résistance. The nomadic art fair (whose former co-director Clément Delépine now heads the latest offspring of the MCH group) had announced a similarly history-heavy location. Specifically, the former studio of Nadar, the eighteenth-century polymath and hot air balloon-enthusiast celebrated as the first to take aerial photographs, amongst other achievements. Could this be the technical origin of “the territory no longer precedes the map?” This Baudrillardian undertone would however have remained unknown to most had it not been for the storytelling of this the eighth edition. Even so, today, the traces of the origins of the space are well camouflaged by the uneventful appeal of the glass-façaded corporate buildings of the Opéra office district. Or, had Buñuel been a real estate agent: the discreet charm of the wage-laborer.

Posters by artist collective KMAdotcom shown at the booth of Glasgow-based gallery Kendall Koppe welcomed visitors with harmless puns: “Good bright colours,” “Kiss on the cheek.” The mood was just like that: a helium-inflated bubble fleeting high above the otherwise discourse-heavy summer. If petrified social structures should be made to dance to their own tune, so Marx, then let the saccharine pop-anthem blasting at full volume from a new Tony Cokes’ video show the way. Presented by Vienna-based FELIX GAUDLITZ, Free Britney? (2022) is characteristic of the artist, showing text slides scored by the Princess of Pop’s discography arranged in chronological order, adding another episode to his long-time investigation into the politics of sound.

Did we already waste a good crisis?

Instead of discourse, a recurring trend this year was text. With a bespectacled curator from Geneva, I stopped to discuss eyewear trends (aviators, rose-gold frames) in keeping with the fair’s likeness to an eye doctor’s practice: text everywhere, painted, screen-printed, light-boxed. What you see is what you read. The next day at Paris+ par Art Basel, the observation verifies itself. Cokes again at Greene Naftali’s, this time presenting the prescient Face Value (Kanye West) from 2018. Or the ever-astute Lily van der Stokker and her pink cloud-shaped sign “only yelling older women in here nothing to sell” signaling over at Kaufmann Repetto’s booth; as well as over at Air de Paris – among one of the rarified larger gestures on the fair – her pastel-colored all-over environment Retro Kitchen (2021–22), erupting with cutesy flowers and a speech-bubble: “don’t like pandemics.”

The neon “Someone is getting rich” by artist collective Claire Fontaine would have read as fairly dull if not dated to 2012, and thus harking back to the post-collapse years. Art trends come and go in cycles, ever accelerating. Could it be that crisis art and post-Occupy folk politics are having a comeback? But all in all, the sea of text-based works, among an even larger ocean of paintings-cum-words, points to another crisis, a more structural one: that of visual literacy.

Through Paris Internationale and Paris+ par Art Basel, text-as-image hints at a fear of the ambiguous power of images. The newfound form is one which, instead, retreats into an IRL version of the Instagram-favored form of social justice slideshows, but one without the social justice. More cynically maybe, meaning considered from a market perspective, it also seems a temporary placeholder for a wider pivot to come. From figuration-fatigue towards a rekindled love for abstraction, without being fully confident in giving up content just yet. Did we already waste a good crisis?

Per tradition, outside, in a very rainy desert of the real, Thursday night was devoted to gallery openings. At Mathis Altmann’s aptly titled “Total Distress” at Fitzpatrick Gallery, the shrooms in the Muji pill boxes are real, apparently, or at least not fake, and definitely not just an image (Basic intoxication, 2022). But who would know at this point? The crowd dissolves, huddled under umbrellas (spot the Eiffel-tower one) and we proceeded to crash the party of a Brazilian gallery at a club whose name is misspelled with a “K.” Already dissociating, or maybe just needing glasses. In the meta-fairs, nobody can hear you scream.

INGRID LUQUET-GAD is a critic and contributing editor at Spike. She lives in Paris.