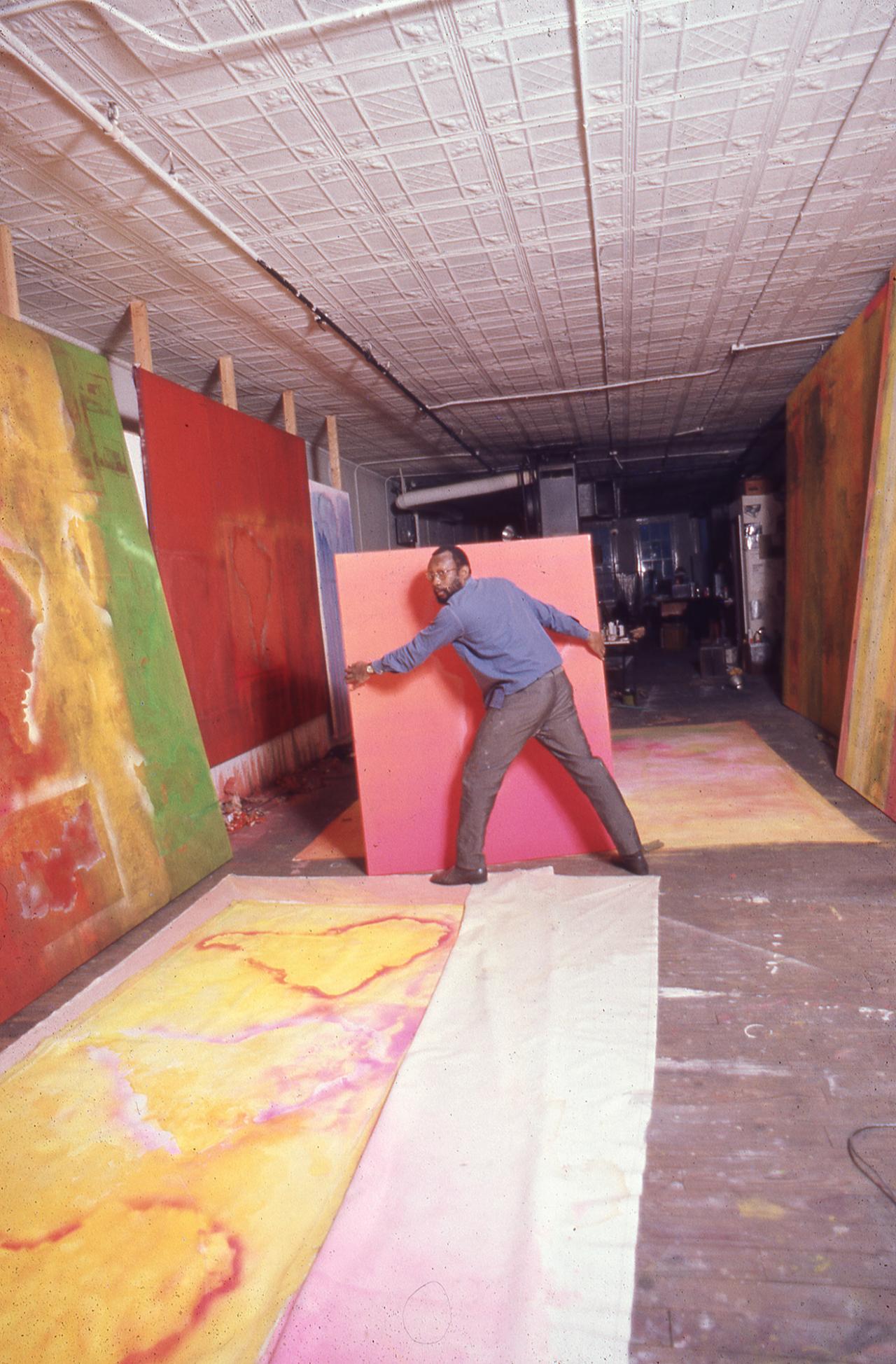 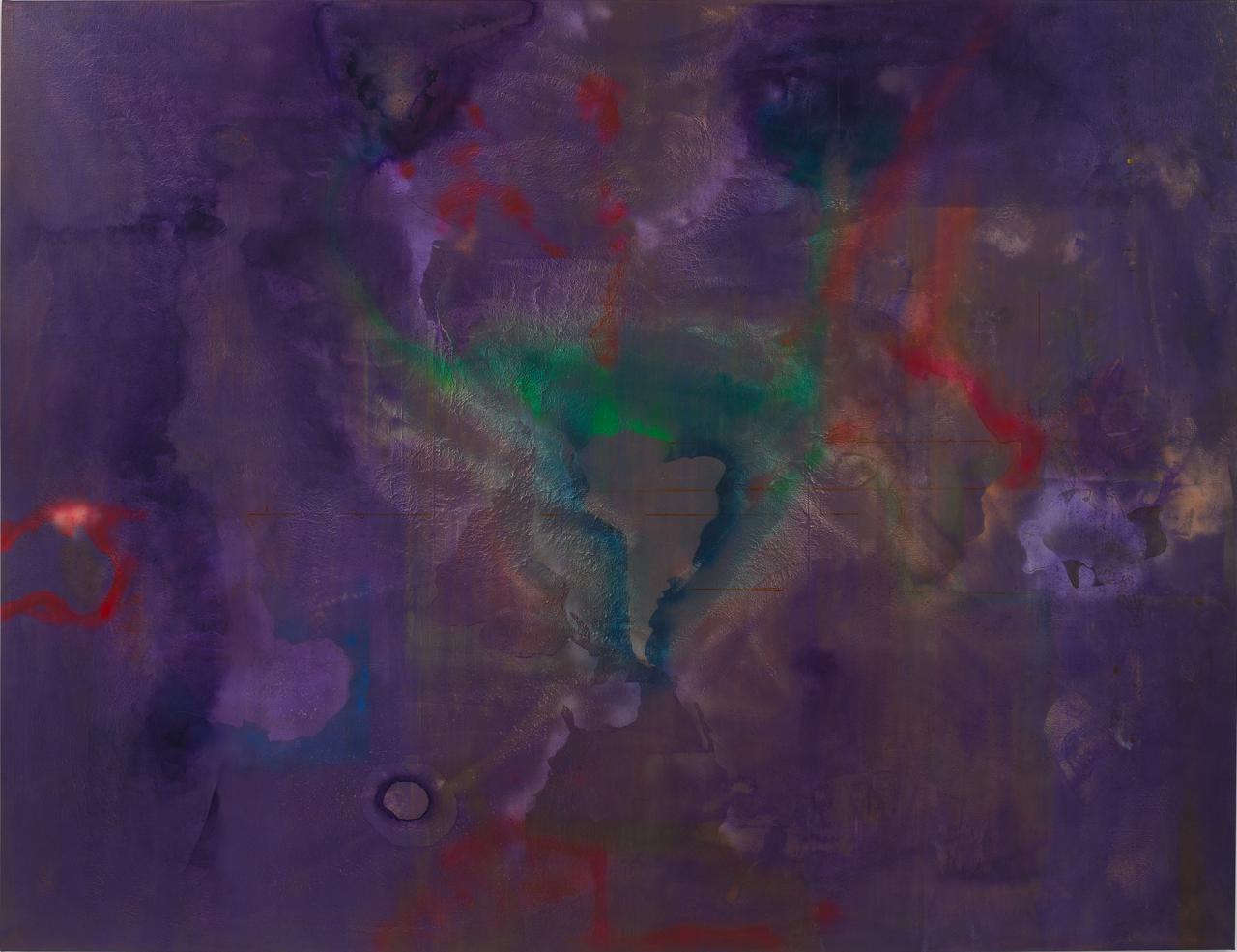 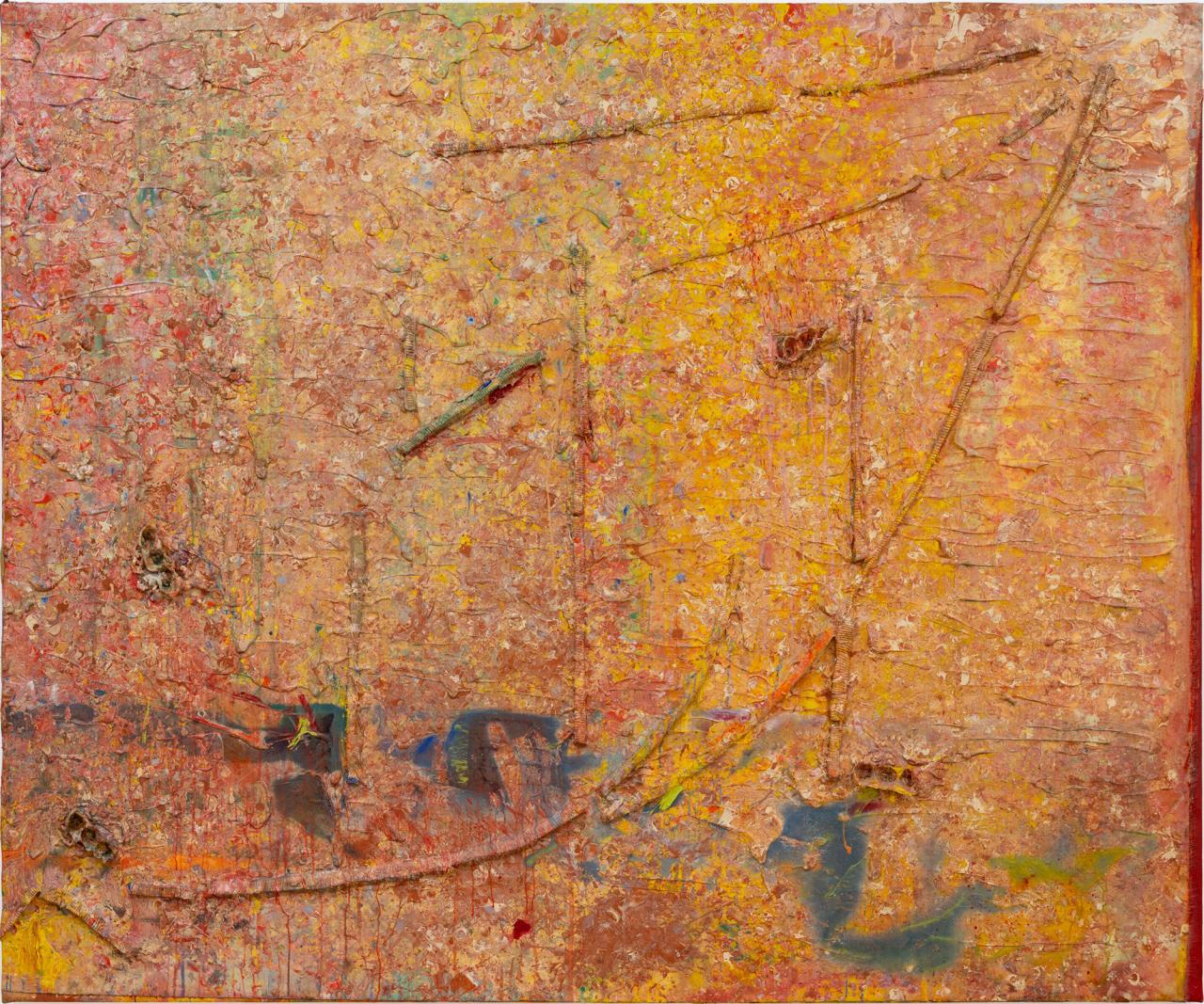 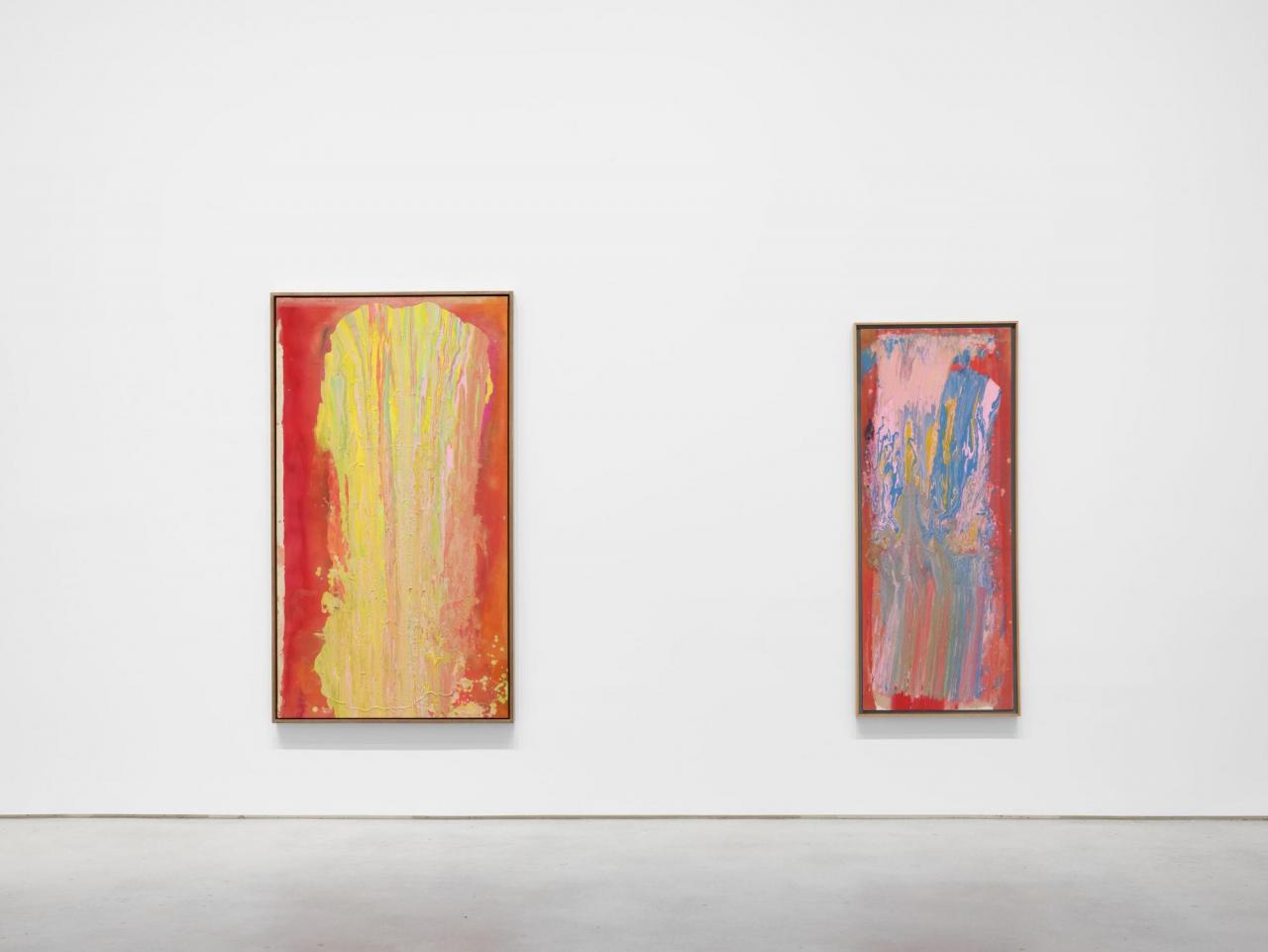 Getting his due in Germany at long last, painter Frank Bowling was recently awarded the 2022 Wolfgang Hahn Prize – an award for established contemporary artists whose oeuvres are not as well-known in Germany as they ought to be. To celebrate, we’re sharing Barry Schwabsky’s words on Bowling’s latest exhibition, originally published in Spike #69, “Storytelling”.

The duplex title of Hauser & Wirth’s first presentation of Frank Bowling’s work, “London/New York”, has, in turn, a double meaning. It refers to the fact that the artist has been dividing his time between London and New York since 1967. But it also signals paired exhibitions in the gallery’s London and New York venues. I saw the New York show, which comprised thirteen paintings made between Bowling’s first move here and 2020, but with no indication as to which works were made where.

Born in Bartica, Guyana, in 1934, Bowling was part of the 1962 cohort at London’s Royal College of Art, the crest of the Pop wave – David Hockney, Allen Jones, Peter Phillips – and at first his work shared similar influences; Mirror (1964–66) for instance, in the Tate collection, incorporates blurred figures a la Francis Bacon and a colour palette that might remind you of Bowling’s London contemporary, R.B. Kitaj, in a dizzyingly baroque composition that swirls around a spiral staircase.

Only traces of such imagistic complexity remain in the earliest paintings in this show, which date from when he first began spending time in New York and coming into the orbit of the critic Clement Greenberg and the colour field painters associated with him. Towards Green (1967), Polish Rebecca (1971), and several others use ghostly silhouettes of continents from a world map, presumably created through the use of stencils, while Bartica (1968–69) includes silkscreened photographs of unrecognisable faces. But in every case, the referential content is half-buried amid flows of dazzling, atmospheric colour – colour in quantity.

In Texas Louise (1971) for instance, more than six and a half meters of scorching pinks and oranges fuse above a dark and earthy lower zone, as if burning off the silhouetted outline of the Americas that floats just left of the canvas’s centre. One would not be wrong to see in this painting, with its upper and lower zones clearly demarcated as if by a horizon line, a sort of landscape or desert scene. The atmospheric specificity given by Bowling’s blazing colour is almost a rebuke to the diagrammatic generality of the summary map that underlies it.

By the mid-70s, all recognisable imagery had disappeared from Bowling’s work, and the artist seemed more beguiled by paint itself – its physical substance – than by colour; works from this period are weighed down by their own materiality. By the 80s, luckily, Bowling had figured out how to employ (and even increase) the physicality he’d been cultivating while pushing his sensibility for colour into even deeper, richer territory. In paintings such as Enter the Dragon (1984) and throughout the decade, Bowling “draws” with linear elements made of polyurethane foam affixed to the canvas. The colour in his early 70s works was ethereal and transparent, seemingly intangible, suffusing the horizontal vastness of the canvases to create effects as open and spacious as they are intense. But in his paintings of the 80s, colour as such takes on, primarily through optical means, a sense of thickness, of mass – as though trying to claim, in its own right, the weight that, in work from the late 70s, had been delegated to the physical substance of the acrylic paint.

Bowling’s art from the 90s onwards can be thought of as an ongoing experiment with ways of synthesizing what, in the previous two decades, had been distinct painterly impulses. Thus a relatively recent work such as Pondlife (After Millais) (2007) – judging by the painting’s palette, the reference would seem to be to the Pre-Raphaelite’s famous Ophelia (1851–52), though the Millais painting is horizontal while Bowling’s is vertical – combines nebulous atmospheric colour passages with denser ones and unidentifiable materials montaged on the surface. As with Texas Louise thirty-six years before, the painting is clearly divided into two zones (in this case, sky and water rather than sky and earth) by a kind of horizon line. But how much more richly developed is the space of the later work, encompassing as it does the tactile propinquity of the foreground – the body of Ophelia, one might say – with the shadowy distances of the upper zone?!

Now that Bowling is at last starting to be appreciated at his true value, we should start to think a bit harder about the whole context in which his work developed.

Bowling’s propensity for such referential overtones, despite having eschewed concrete imagery for some four decades now, is surprising given that he is still, after all, a colour field painter. He remains what art historian Darby English has called – with particular regard to the 1971 painting Where is Lucienne?, shown here again fifty years after its debut at the Whitney Museum of American Art – “the committed experimentalist who feels but does not resolve the need to engage ‘worldly’ subject matter.” Mark Godfrey, in his catalogue essay for “London/New York,” rightly calls attention to the affinity of paintings like Texas Louise with the work of somewhat older artists like Helen Frankenthaler and Jules Olitski, but it’s surprising that Godfrey does not comment on Bowling’s decades-long dialogue (highlighted in the catalogue for the artist’s 2017 retrospective “Mappa Mundi,” curated by the late Okwui Enwezor for the Haus der Kunst in Munich) with Greenberg, still a bogey man for much of the art world. And Bowling’s further development shows interesting parallels with that of a painter closer to him in age, Larry Poons – the real comparator for Bowling’s transition to thicker surfaces – not Julian Schnabel or Anselm Kiefer, as Godfrey suggests.

Now that Bowling is at last starting to be appreciated at his true value, we should start to think a bit harder about the whole context in which his work developed. Understanding that context may require forgetting the biases according to which Minimalism and Conceptual art were the only viable options for artists of Bowling’s generation. Modernist painting was still a vital project. What Bowling wrote fifty years ago remains true: There is “a highly complex, often fugitive and hence largely ignored area still to be investigated”.

BARRY SCHWABSKY is a critic, art historian, and poet. He lives in New York.