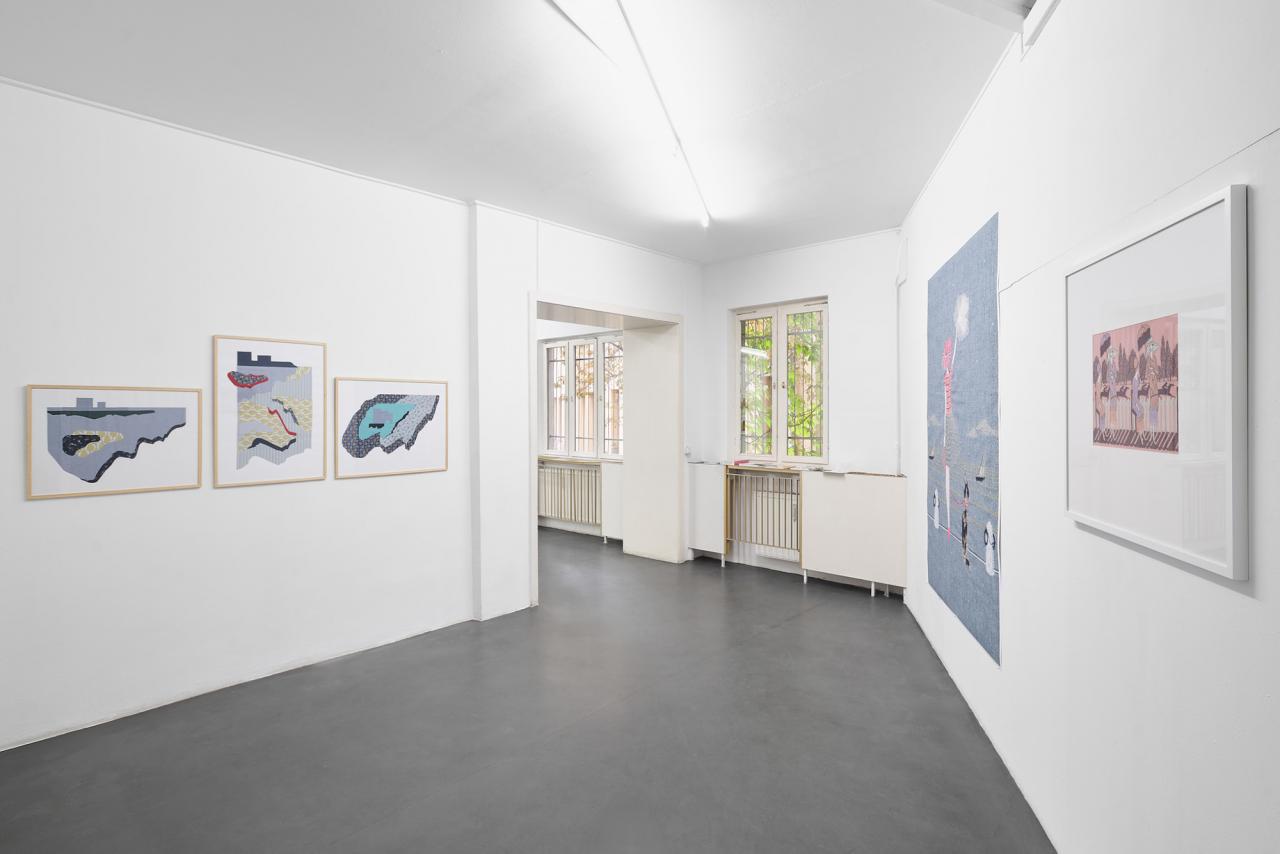 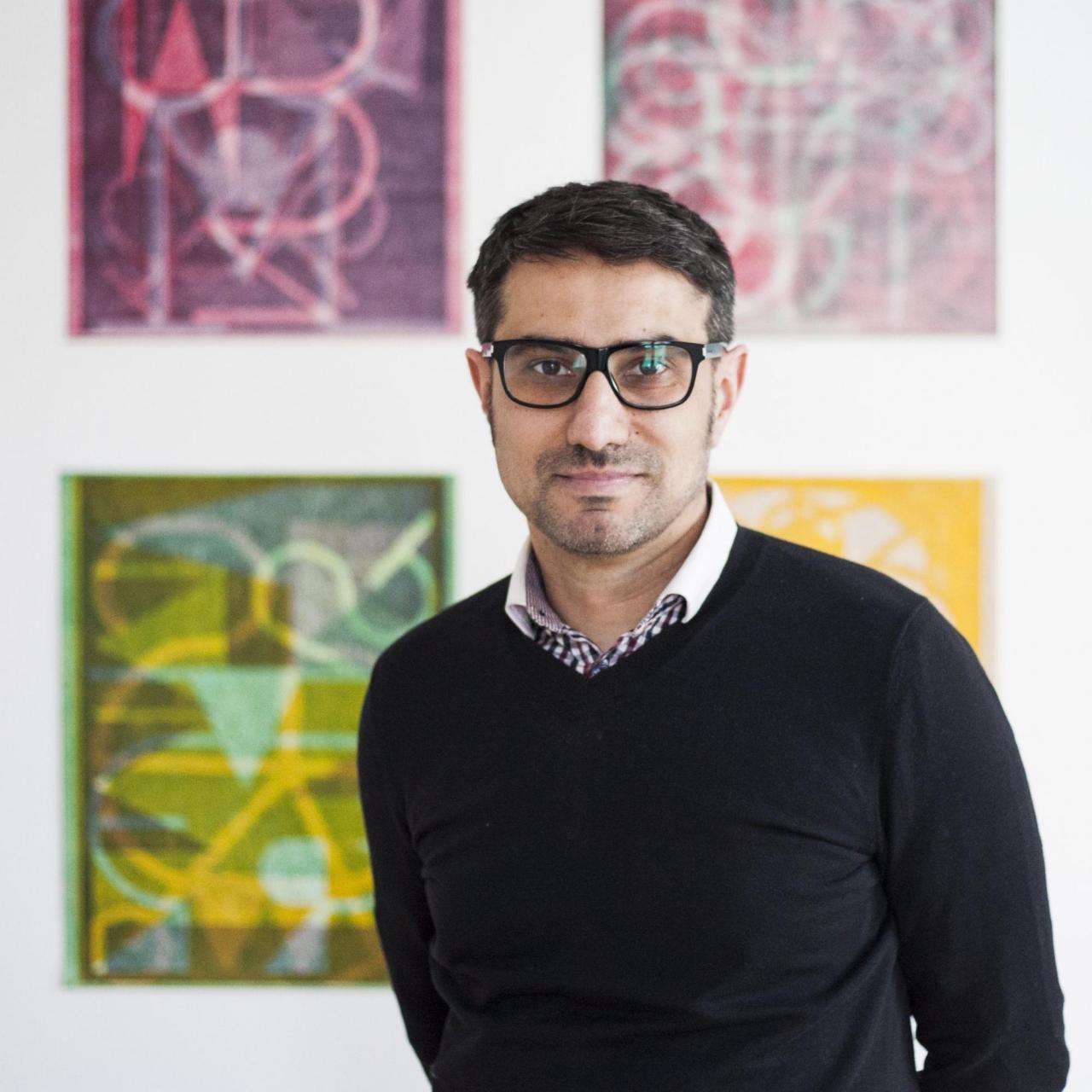 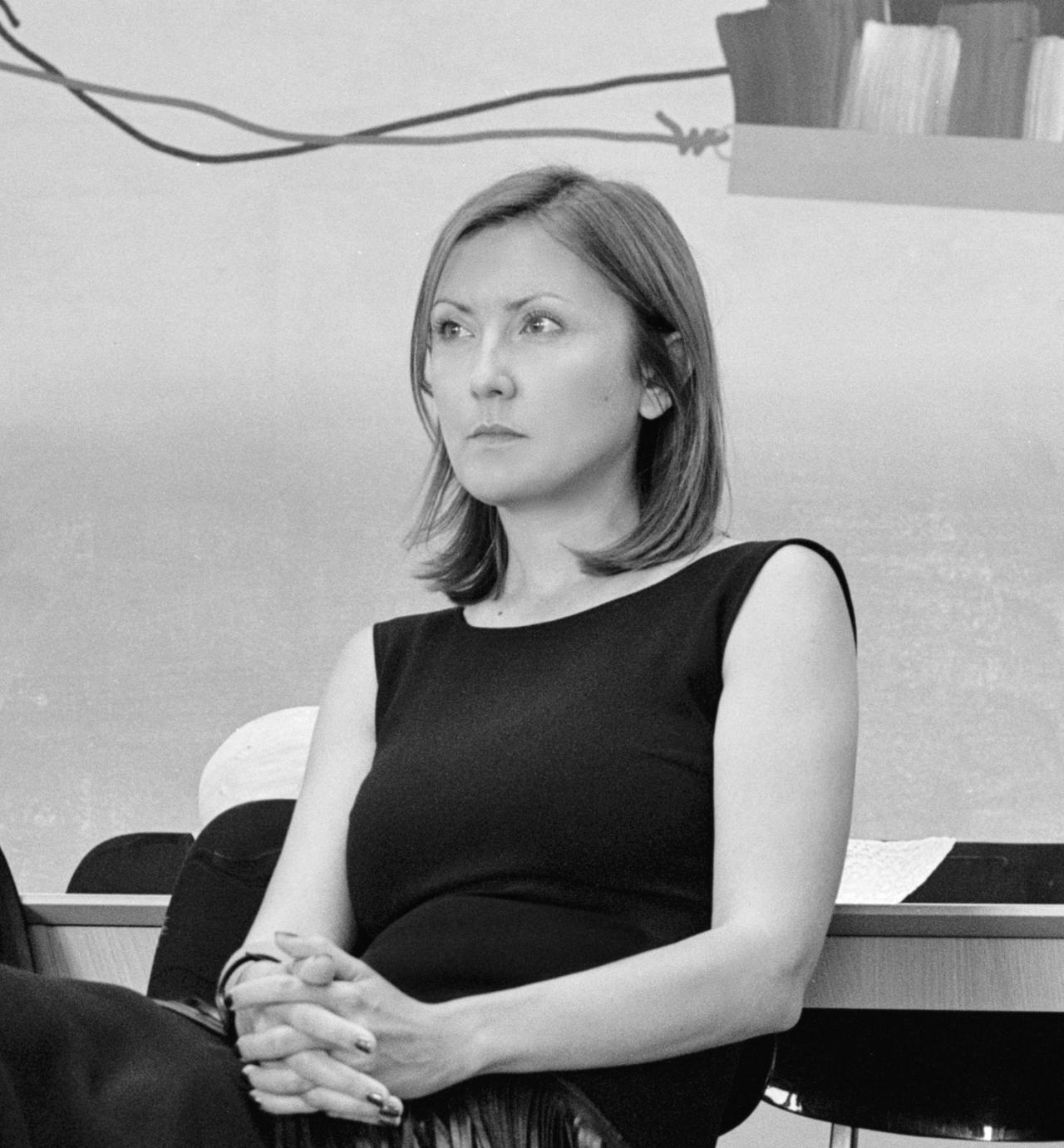 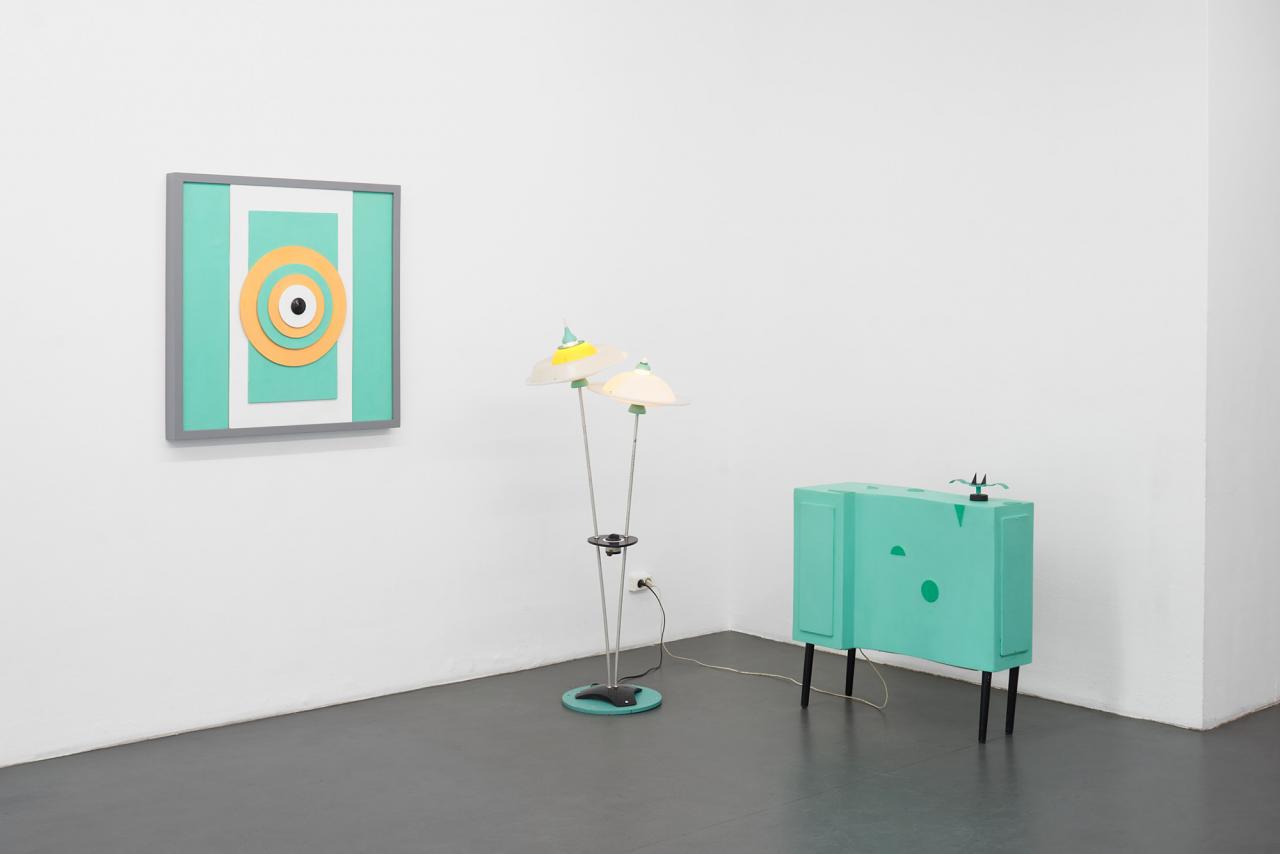 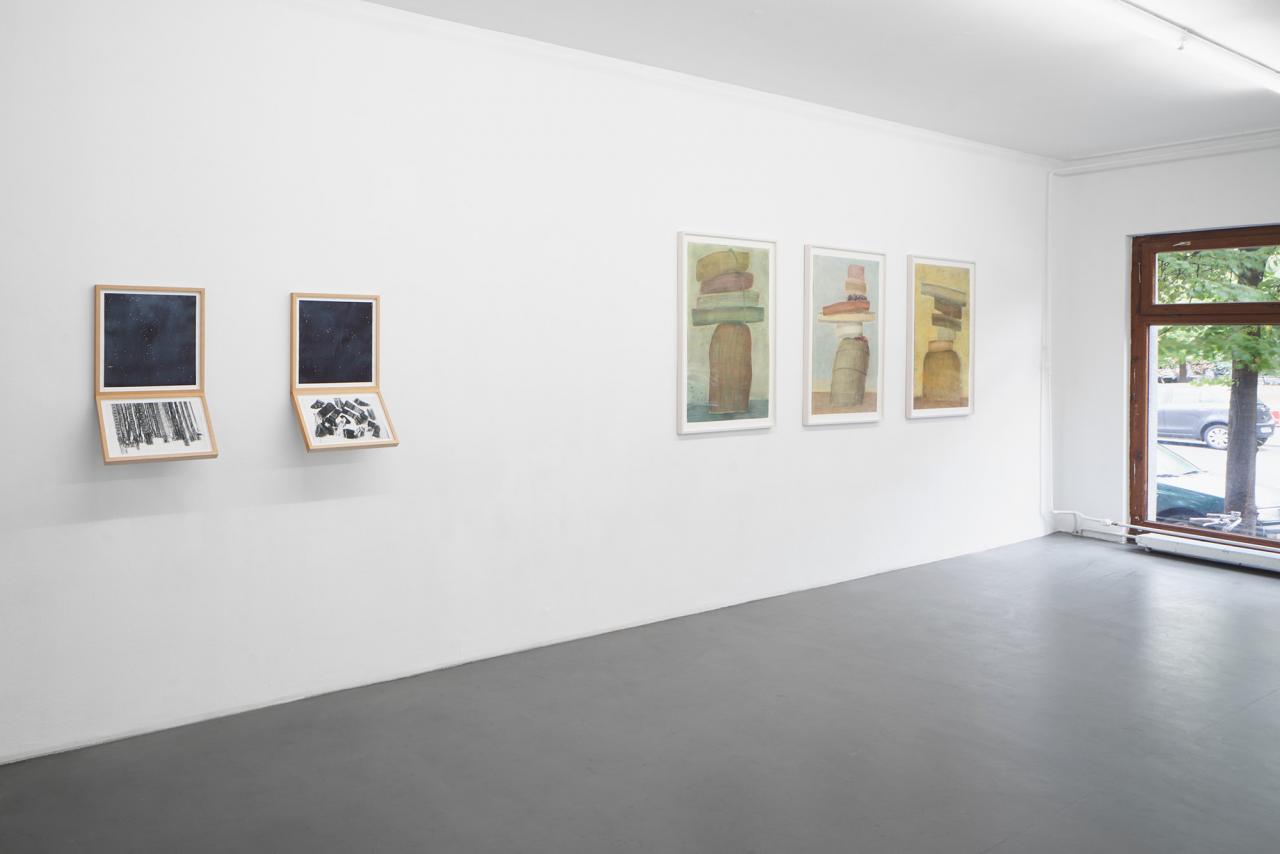 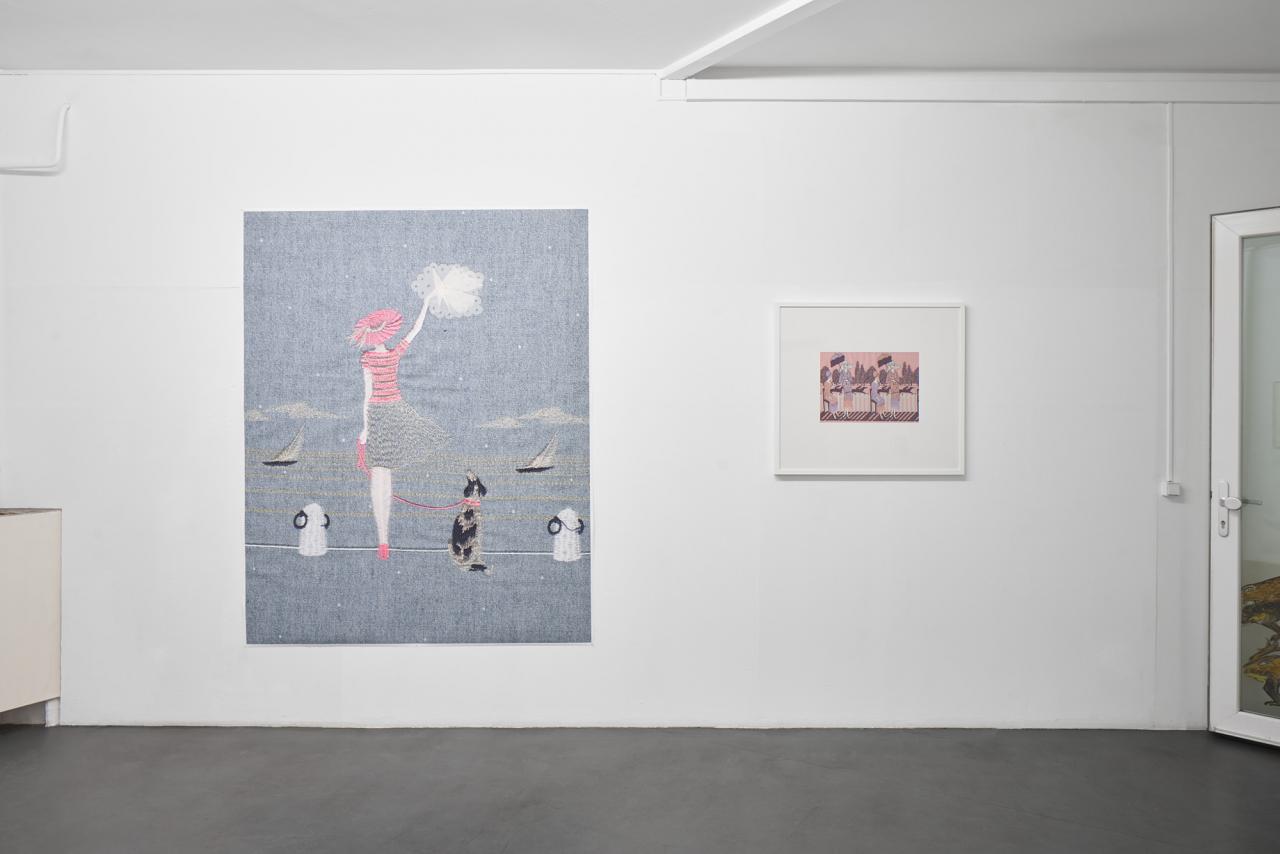 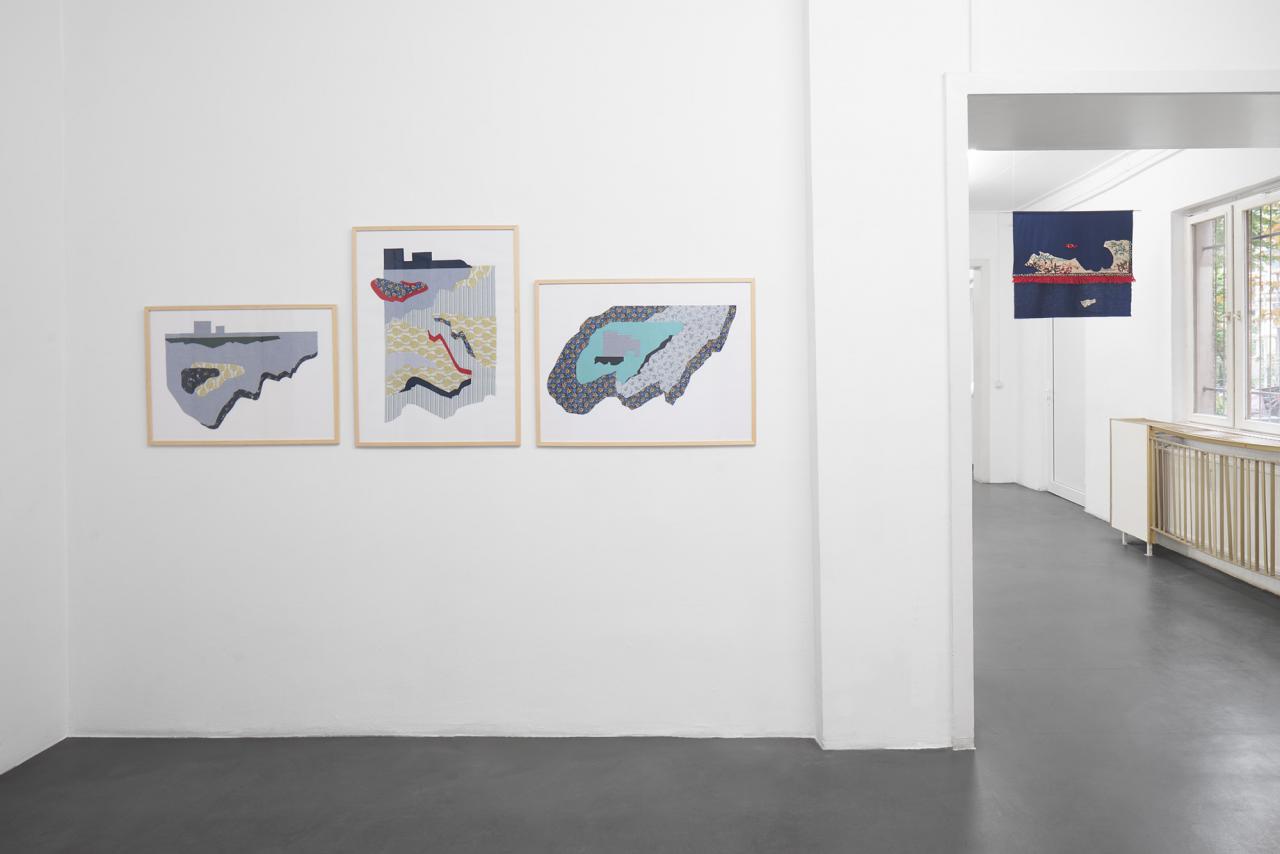 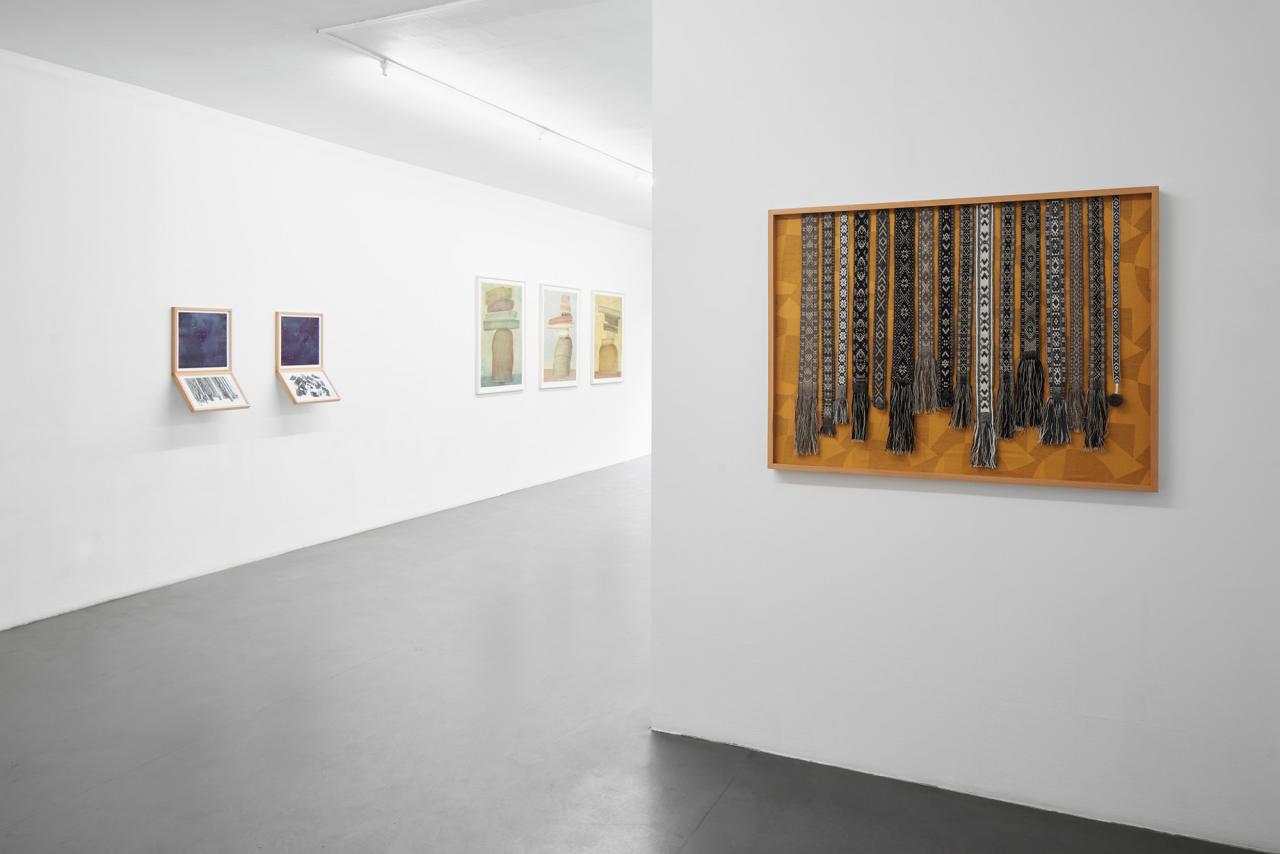 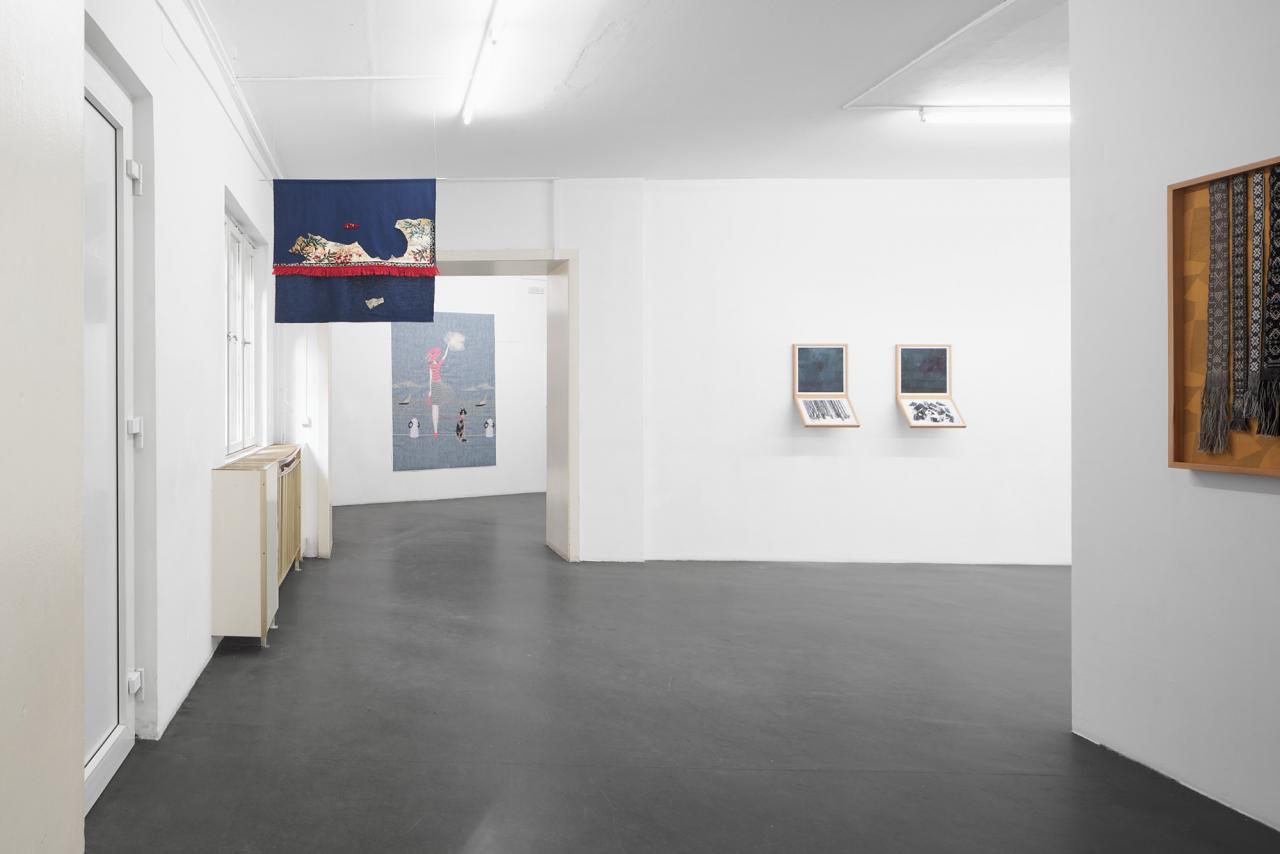 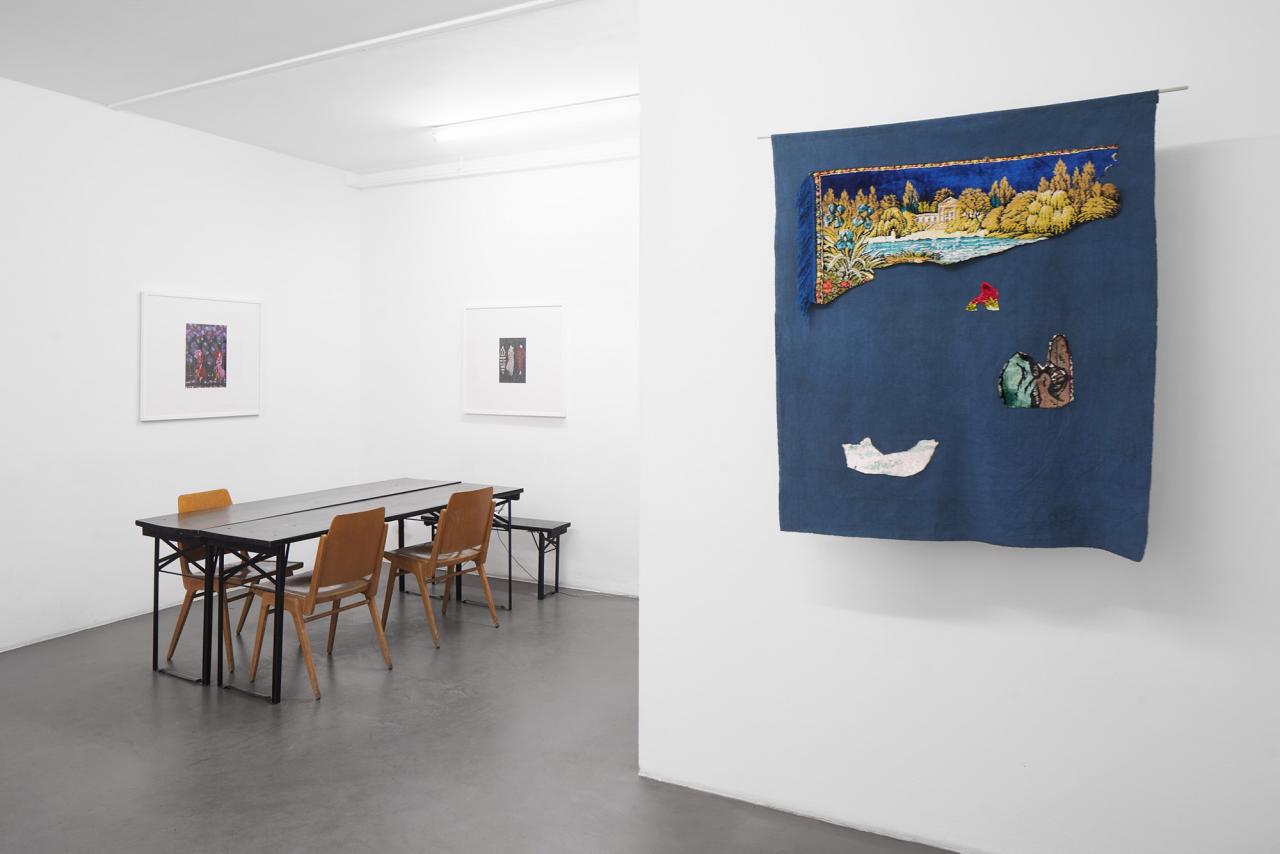 Spike Berlin has been host to a collaborative show between Ivan Gallery Bucharest, and Temnikova & Kasela Gallery Tallinn. Before the final days of the group show, we spoke to Olga Temnikova and Marian Ivan about the situation in their home countries, their galleries, and how the show “On Adornments” came together.

Spike Could you describe the benefits of running a gallery outside of one of the major art centres?

Marian Ivan As they say, you’re the king in your village. In big cities it’s hard not to follow trends and the pressure of keeping up with what everybody else is doing, which affects the program. Bucharest allows me to focus more on what I want to show instead of what others are doing.

Spike What are the markets for art like in Tallinn and Bucharest? Who is buying art there, and is there public money available for artists and dealers?

Temnikova Estonia is surely a small and developing market, but being here, being so active internationally makes us very visible. It’s a protestant capitalism situation, so not that much of show-off, but then again we do feel as a part of the community and feel its support. Especially now during Covid. Our historic (and) cultural links to Russia also help, The Baltic States are rather interconnected. There are several larger collections/collectors in the Baltics, such as Zuzans and Vitols/Vitola family, Lewben Art Foundation, also state museums and some generous amount of private buyers. And yes, there is some public money available, Estonia has been also commissioning public artworks from artists with their famous 1% law – it has been very helpful, there are several scholarships available.

Ivan Bucharest is a small but growing market, mainly nurtured by young galleries. Since the rise to international fame of local artists people started paying more attention to contemporary art. The public institutions fell hostage to their directors and don’t have a strategy on mapping the scene, this is reflected in what they collect. Like in communism, the person in charge becomes the museum. Unfortunately, as a dealer I have a stronger relationship with institutions abroad. But I am still optimistic, there’s hope for a change.

Spike What is the situation like for artists and curators in your cities?

Ivan Bad, I would say, especially since Covid, everyone is struggling. Somehow the government failed to support the independent art scene, hopefully there will be more financial support in the upcoming months. Commercial galleries in Bucharest got a bit of support from the local government, the money that we got I decided to give to the artists.

Temnikova The scene is very much dominated by the Estonian Academy of Arts, which is maybe not a bad thing, as it is a pretty strong institution. There are several museums and art centres to show your work and realise curatorial projects, new institutions have emerged, such as the Kai Centre. Both the Estonian Centre for Contemporary Art and the Estonian Contemporary Art Development Centre are doing a great job of producing exhibitions, inviting curators for residencies, organising press trips, and developing links to other international residencies.

Spike Are the political and economic situations in your cities informing your work at the gallery? What are the major problems to overcome?

Temnikova Sure it does, maybe political not that much, but let’s see with our current conservative government. Economically, we’ve been lucky so far, that not being able to do Art Basel and none of the Frieze fairs offline we are still open, we do feel local audiences support us. As for the problems, in Estonia we have just one private collection open to the public, and in general the tradition of collecting is very young. But institutions are really doing a good job of engaging audiences of different age, so it is changing. Another issue is surely the lack of education for white collar works, so there are not so many outstanding leaders out there. Aalto University in Helsinki in 2019 started offering executive education in business of culture, so we have high hopes for that.

Spike How did you become gallerists, what is your background?

Ivan I have a degree in Economics and I was lucky enough to open the gallery when there weren’t many in Bucharest. The beginning is quite the usual story, I started with a small space in the city centre and focused on building a programme with artists I knew and then became friends with.

Temnikova I am from a creative family, studied graphic design and pursued a career as a painter. I randomly took on a job position as a gallery manager some 16 years ago and it felt just so much more fun than being an artist. My academic skills are mainly self-taught.

Spike What are your thoughts about Berlin, your expectations when you come here? What do you like most about the city?

Temnikova Its a special place for me, surely not my main business destination, but this is what makes it so attractive. I truly did not have any expectations, I love the space and Spike, I was dreaming of doing something with Marian and we seem to have great synergy – the show came out so well! Coming from the East, it feels cosy here, I feel I belong here and can relate. This new life of being new West I have mixed feelings about, but Germany’s neo-liberalism is much softer, so it’s ok. I would not say this project had the best timing, but what can you do?

I love the huge skies of Berlin, I love the people who live here, those whom I know, work ethics seems to be a great combination of getting things done professionally, but not killing yourself with work.

Ivan Berlin is my second home (my partner lives here) and it’s still welcoming everyone, at least for a short while. It’s still quite relaxed, I would say. It’s a vast city, if you want to be in your bubble no one disturbs you.

Spike How do you see Berlin's future within the art world?

Ivan Hard to say in the current context, but Berlin still has a strong art scene, so many artists still live and work in Berlin. There has been support from the government and probably there will be more, let’s not forget this is the richest economy in Europe.

Temnikova I am not sure that within several years there will be major break-throughs in the art world due to economic slow-down. If Berlin rents won’t hit the ceiling, and German schools will keep on preparing great new artists as they do now, the city will keep its position as EU culture capital with a human face for some time.

Spike How did the idea for the collaborative show come together? Were you thinking about the audiences here when putting it together.

Temnikova We just suddenly had a bit more time to talk and plan. Our New York project in May got cancelled, so Marian offered me to jump in to his project here. We were thinking about local audiences, but not sure we got it completely right.

Ivan I’ve known Olga since she opened her gallery but we met only in the context of art fairs. We were planning a show together for a while, and I thought Berlin would be perfect, in terms of audience but also logistics nowadays. We had to do something since there has been no physical art fairs. It’s not the same but we got the chance to meet and reconnect with people.

Spike When we come to Tallinn and Bucharest, where should we hang out? What are your favourite places?

Temnikova Our recent gallery space is located in a new residential area called Noblessner in the same building with Kai Centre, a new contemporary art exhibition venue. There are several amazing restaurants and bars, a big marina, and a slip for winter swimming and saunas. I also live here and it’s almost impossible to leave the place, so I think you should come here!

Ivan I have the privilege of living and working in the city where I grew up. I don’t go out so much but, when I do it has to be a place where I can sit with my dog (Bucharest is not a dog friendly city yet). Bucharest is a city of many layers, some soft, some hard, some cold, some hot. It has a spontaneous energy, you never know what’s around the corner. When you come to Bucharest you will be surprised, for sure.