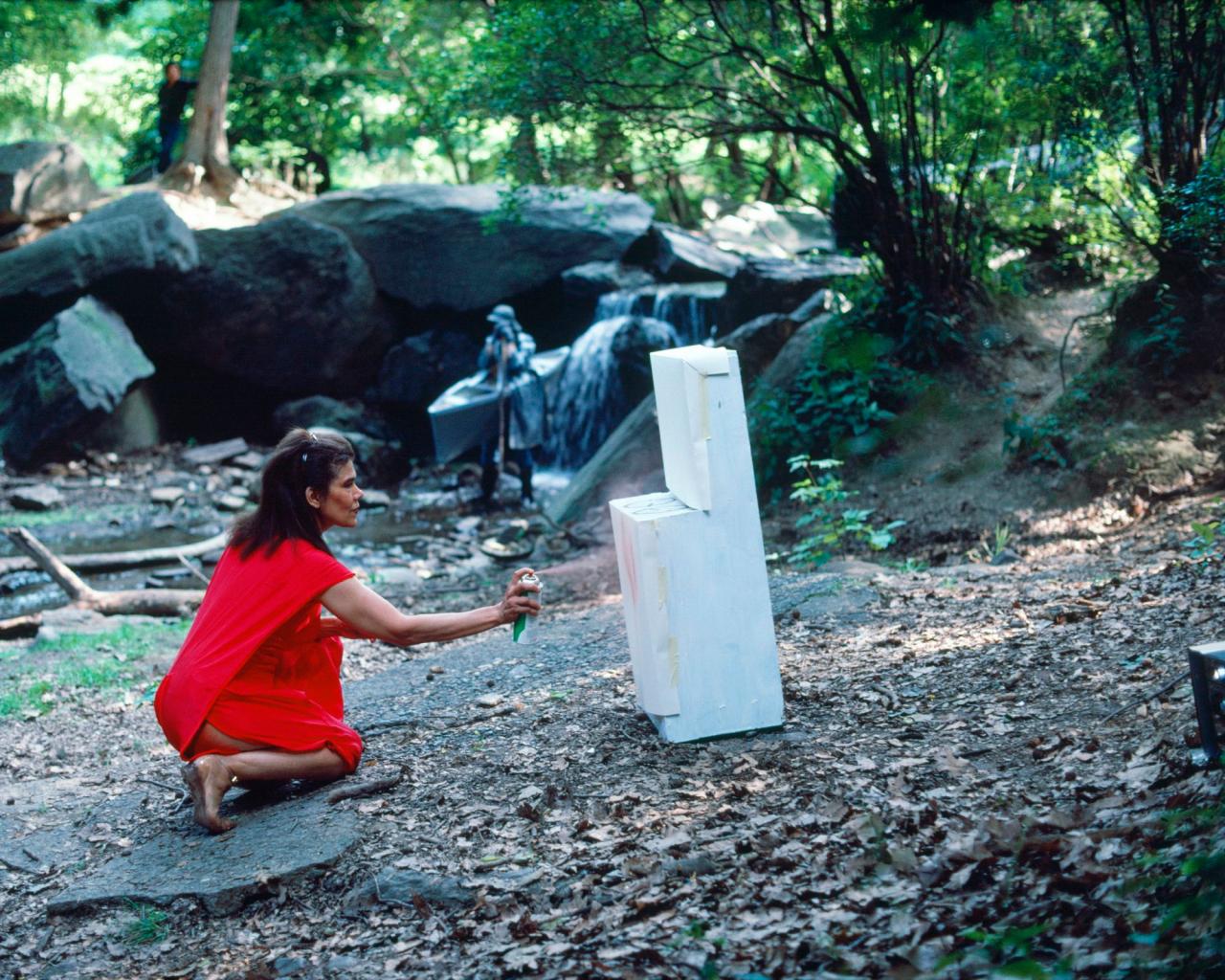 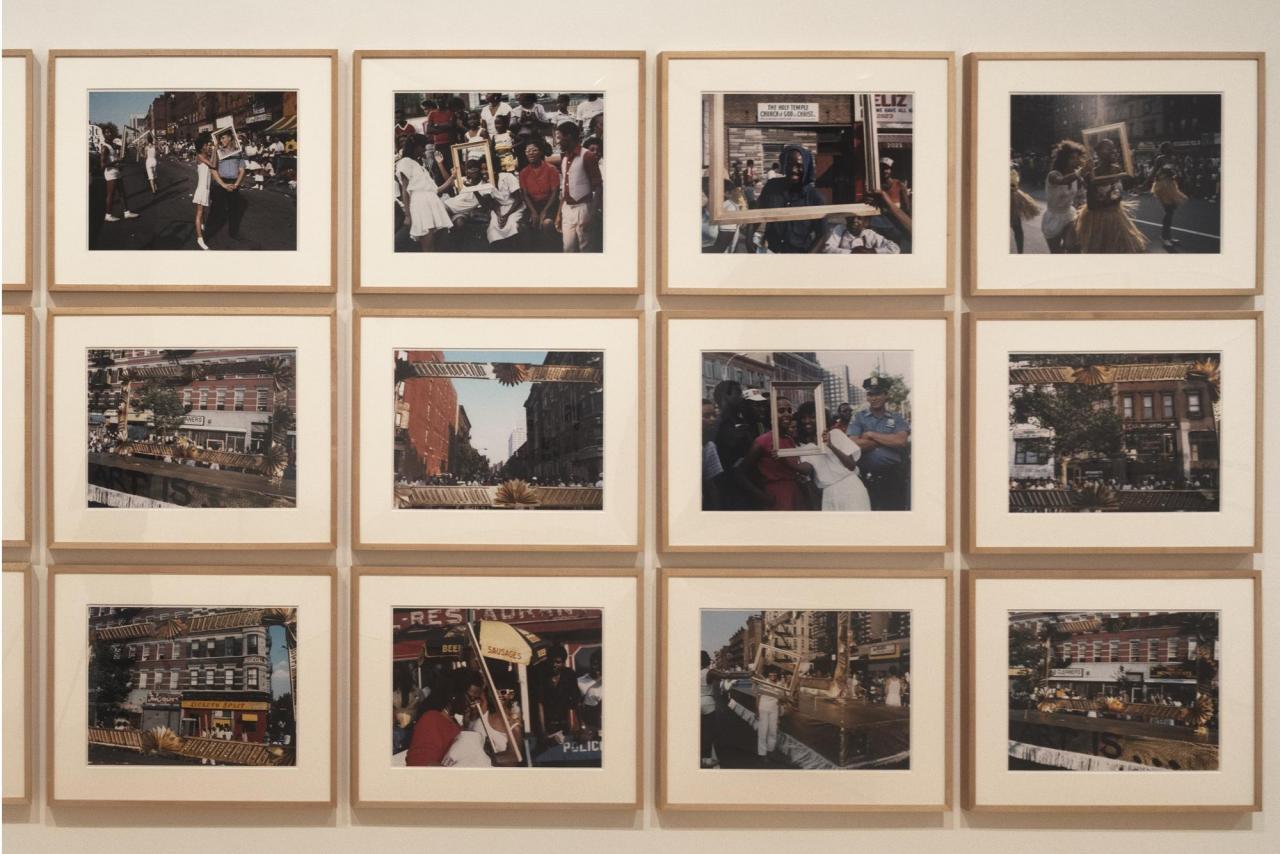 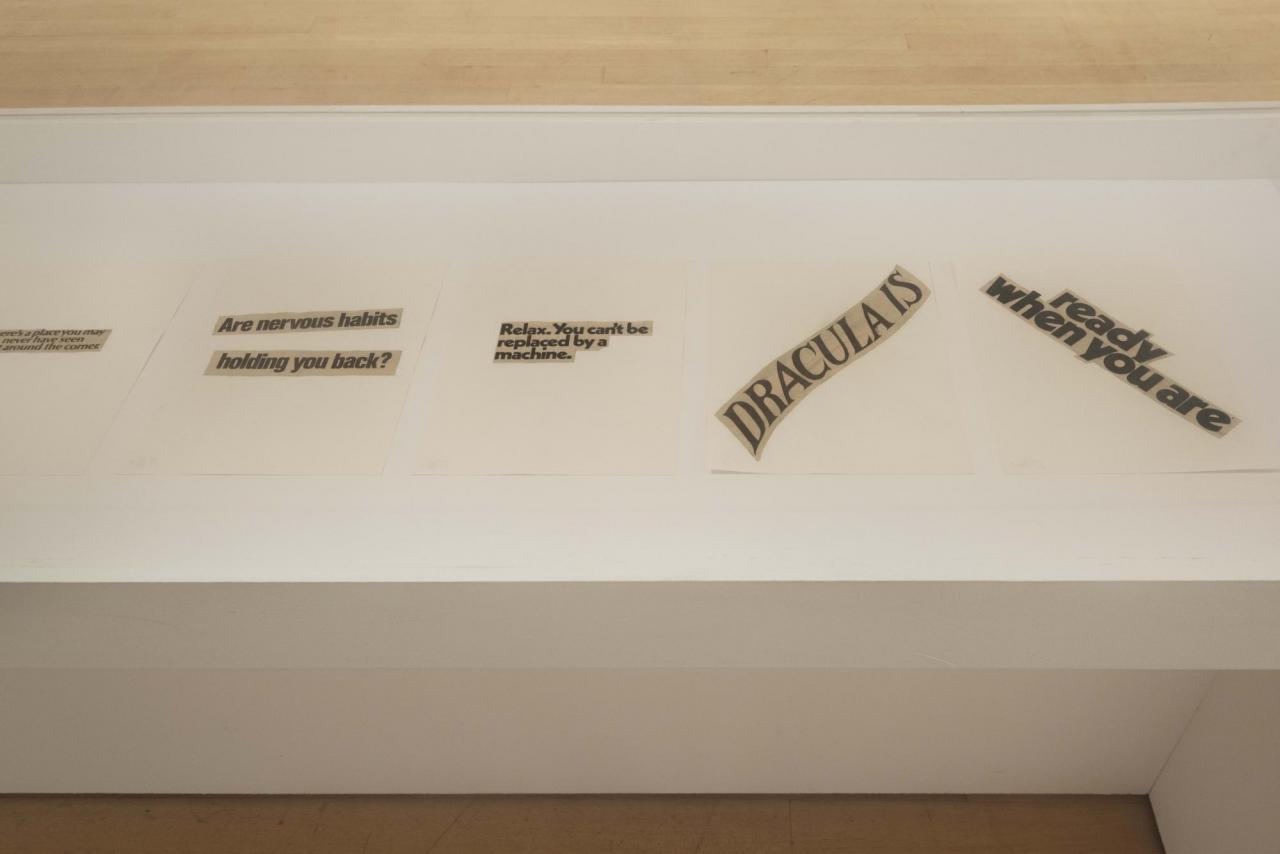 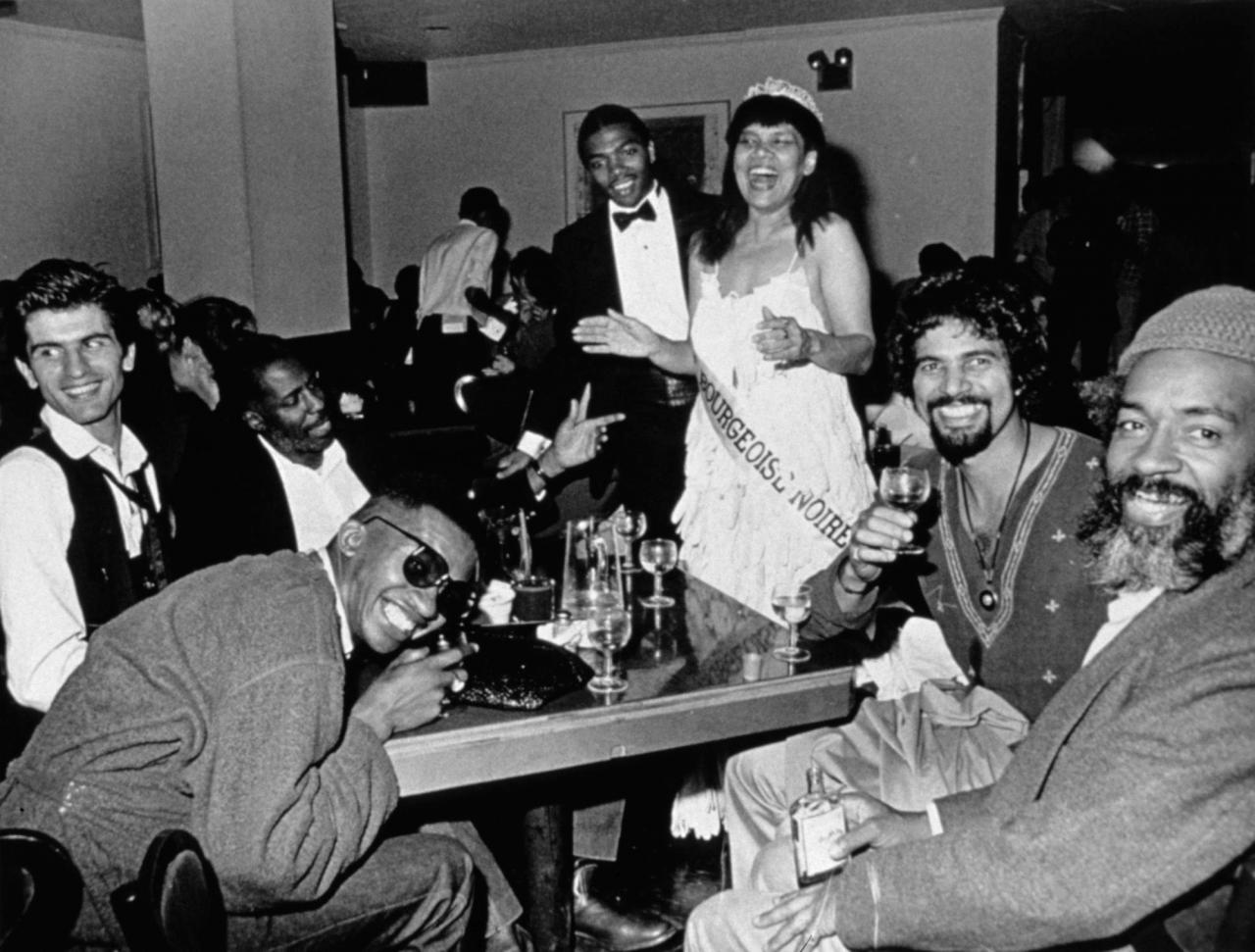 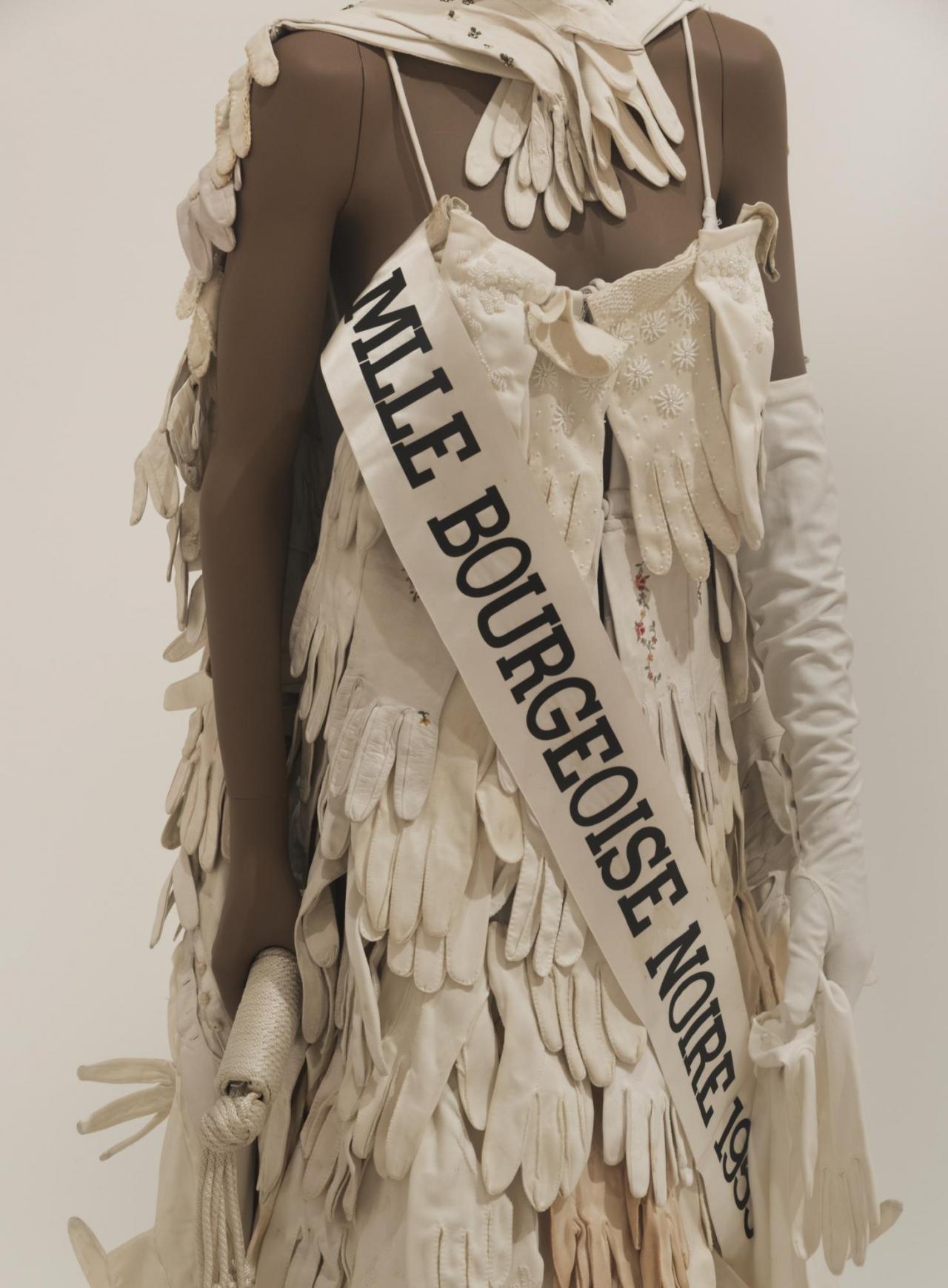 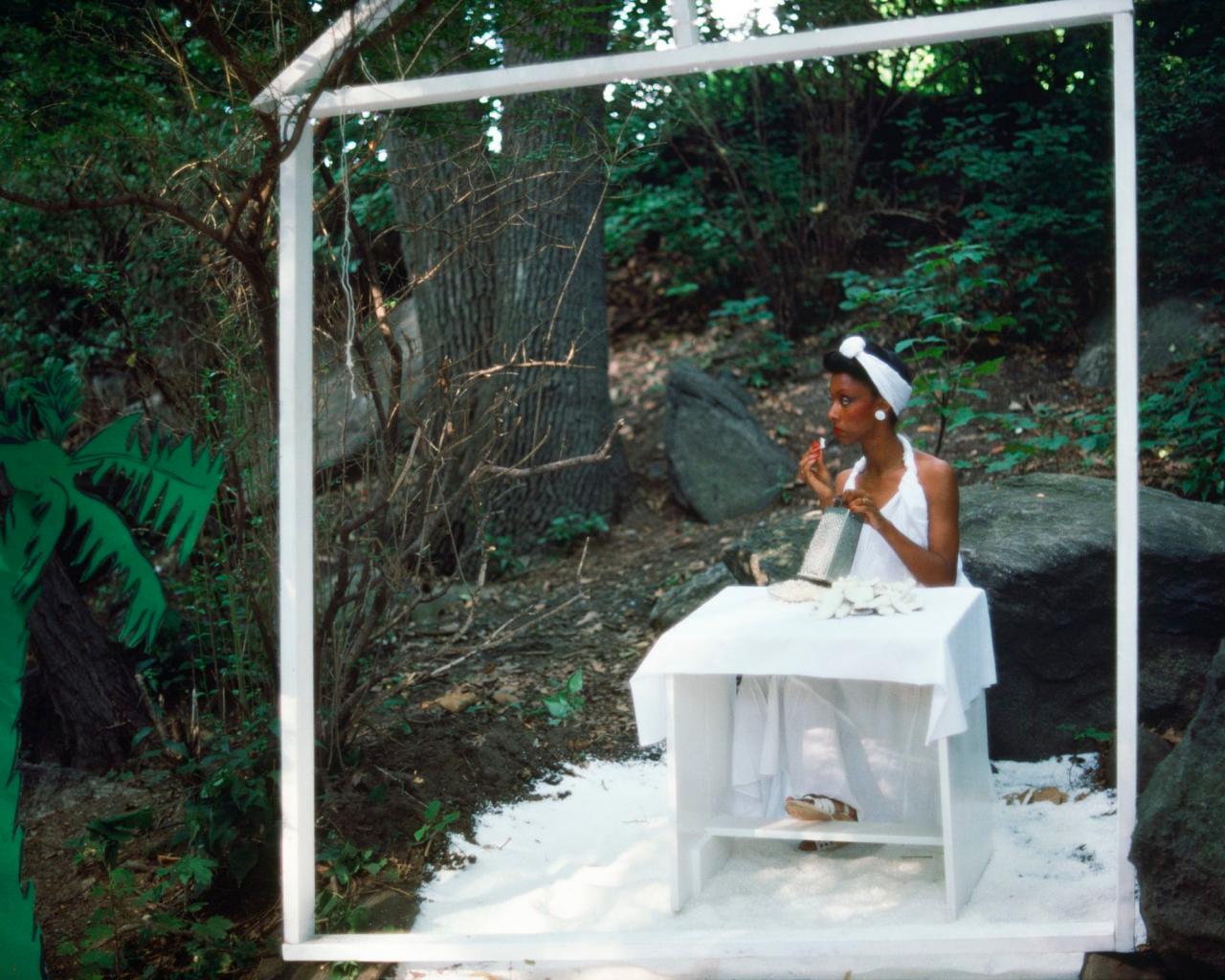 Exhibitions are frequently deemed “overdue”, but perhaps nowhere is it as true as with the first retrospective of Lorraine O’Grady, the 81-year old trailblaizer of feminst performance art, which opened at the Brooklyn Museum last month. Isaac Jean-François on her expansive, celebratory work.

I fell into Lorraine O’Grady getting down on the images of music in the streets. The photographs of her outdoor performance show dance, laughter, and black joy in Harlem’s African American Day Parade of 1983 (Art is…(Girl Pointing), 1983/2009). The artist’s draws her motile sitters in by having them hold a large gold frame in front of their faces in a crowd. The frame is both psychoanalytic and psychedelic – Parliament to the people’s unconsciousness. Yet, what she foregrounds is a black feminist figuration of occluded life.

O’Grady’s exhibition alters our sense of presence; she has been here, in the world of performance and conceptual aesthetic critiques, yet how could we not have paid attention to her mark? Whiteness’s claim to the avant-garde is never total, and O’Grady’s performances, many of which we only have photographic remnants, remind us of blackness’s laughter in the streets. Her music exceeds the frame of belated celebration.

The show feels like a constant call to a path paved by the artist herself. Her brilliance is collagist, figurative, and ephemeral, and one aspect remains vibrational: time. Her series Cutting Out: CONYT (1977) saw her chopping news headlines their original contexts in the New York Times, and repositioning them on white paper, an insistent beat across the pasted word. The time of black liveness is punctuated by an insistent annotation and refusal to be cemented in a present iteratively denied to black peoples.

In the abstraction of Cutting Out, O’Grady crafts the position of editor on her terms. The stretched temporality of this ongoing annotation, especially as she revisited the process decades later (Cutting Out CONYT, 2017), reflects the self-making strategies so essential to black motion. News titles out of contexts on sheets of white paper that are often much bigger than the titles themselves suggest an extraction of specificity into an otherwise jive of black meaning-making. She cuts out the middleperson and offers the news herself, and if black imaginaries are new for you, well, then she’s exposed that lacuna in the public’s consciousness.

She plays with the power of interruption, disruption, and laughter. Art Is… brings aesthetics to the people’s street knowing full well that any notion of a “people” is built on an ongoing management of black life. That is, the collective is vulnerable to state capture, with the police present in the frame, but O’Grady brilliantly accesses blackness in excess of photographic capture. The frame is never quite full; O’Grady fixes the camera beyond the gilded features of an enclosure.

Power is a performance, too, and O’Grady stages its plasticity in a sea of otherworldly blackness.

Escape is possible in the smiles, laughter, and queer socialites that vibrate the hold. We see this in her large portraits with knights melancholically in conversation with Auguste Rodin’s Burghers of Calais (1884–1889). The history portrait unfurls on an almost comically black background – where did she get that costume? How does the performance artist become a clothes designer, historian, and trickster all at once? Power is a performance, too, and O’Grady stages its plasticity in a sea of otherworldly blackness.

O’Grady’s persona Mlle Bourgeoise Noire, who wears a white dress with white gloves the artist collected over time sewn on its surface. Her costume is a blunt example: a message for those who consolidate power. Absence is never quite closed, despite the organisers of “The Black and White Show” (1983) at the New Museum’s exclusion of black aesthetic visions in its exhibit. Black feminist interruption and annotation will not only emerge disinterested in absence, but will dawn the foolish cloak of power and expose it all. And Mlle Bourgeoise Noire will have fun with aesthetic practices of refusal – whip and all. Her gloves are reminiscent of the gloves and white hands floating in Crystal Waters’s “Gypsy Woman” – is Mlle Bourgeoise Noire bringing us to a protest or a party?

The mélange of photos and collages offer a black feminist critique of aesthetic visuality beyond the dictums of an overly white, male dominated art field. O’Grady’s work demands reverence for its deep reflection on a black feminist orientation disrupting the given and accepted ways of rendering life legible. The flight of her performance work only makes our ears more attuned to her work on lower and other frequencies of black feminist aesthetics.