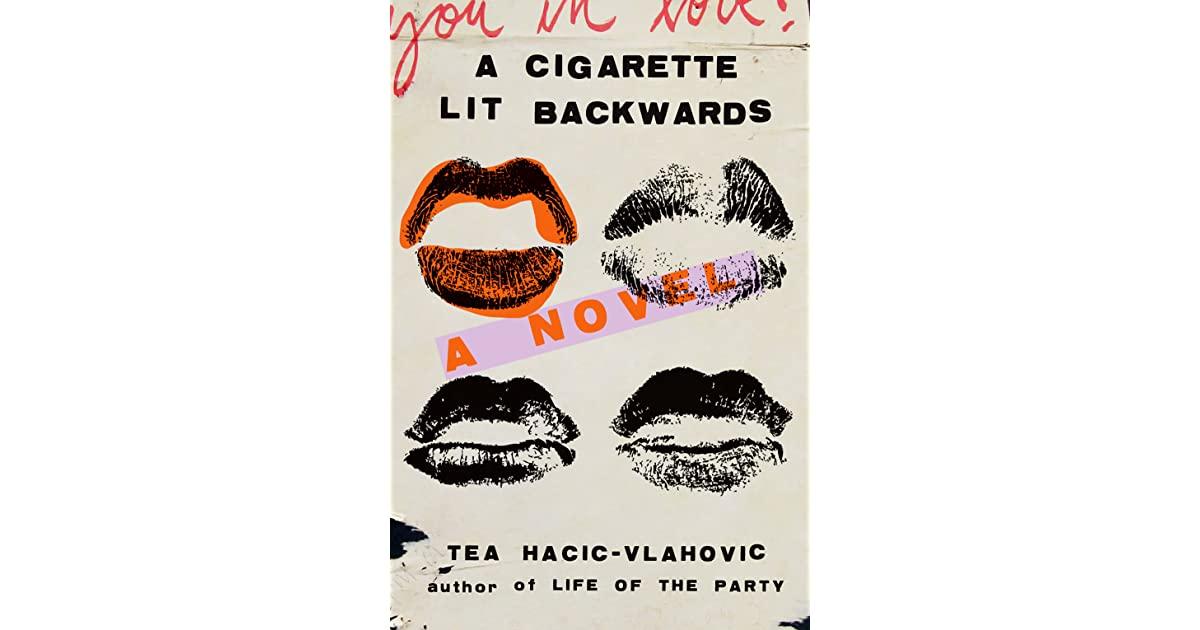 To celebrate today’s publication of Tea Hacic-Vlahovic’s new book, here is a chapter from the book about sex and failure. A Cigarette Lit Backwards is set in the punk-rock scene of the early 2000s and vibrating with the intense ache of bad choices and deep longing, a needle-sharp portrait of a young woman and how far she’ll go to find acceptance.

“I didn’t know you cared this much,” Mom pleaded through the door.

“What do you mean? I cared about this more than anything. I lived for this!” I howled.

She sighed, picked up a plate she’d left out for me that morning, still untouched, replaced it with a new plate, and shuffled downstairs. I hadn’t left my room all weekend. I was in a ball on my carpet, crying, clutching the letter. The rejection letter. My rejection letter.

The letter didn’t tell me what I did wrong. It didn’t say much of anything. Just, thanks for auditioning, but after much consideration (yeah, right) we decided to reject you and crush your dreams, blah, blah, blah. Vague, written by a robot. I read it a million times. The absence of explanation made me come up with answers myself . . . The North Carolina School of the Arts regrets to inform you, actually we don’t regret it, we hate your guts. What were you thinking? What made you believe that someone like you could get in? As soon as you left the auditorium, the judges broke down laughing. Hysterics. Everyone made fun of your audition. Your failure is the talk of the school, professors and pupils alike. They had secret cameras in the auditorium, filming the whole thing. Your humiliation is public record. They’ll keep the tape in their archives for generations to come. Consider this flick your only artistic legacy. Stupid bitch.

Did I bomb my audition without realizing? Had I been strung-out? Delusional?

There was no way to be sure, since I couldn’t remember how I played. But I never remembered playing when I played well. Not remembering meant it went spectacularly. The whole point to playing well was you reached a state where your brain stopped working. No, it was something else. My grades? I had only sent them my old transcripts. They must have gotten their hands on my current stats. Was that legal? Could I sue? They shouldn’t care about grades, they were an art school. They’re against math and science in principle. Right? So what else could it be? My essay? No way, that was a masterpiece . . . that only left one thing. My recommendation letter. My piano teacher must have trashed me. He betrayed me. I knew he hated me but I didn’t know he’d go out of his way to ruin my life on purpose. What a dick.

I was a loser, a degenerate, a lost cause.

I’d never see him again. I’d quit piano and I’d quit everything. I wouldn’t even bother hiding my new grades from Mom. I was a loser, a degenerate, a lost cause.

I heard Mom talking to someone at the door. It sounded like a boy. Like my boy. I heard his signature limp up the stairs, then down the hall, to my door. I couldn’t believe it. He’d never even rung my doorbell before. What a prince. Mom must have been desperate to let him in.

“I’ll wait.” I heard him sit down, his belts and chains clinking on the floor. “I’ll have lunch,” he said. I heard him pick up the plate.

I reached up to open the door and fell back onto the floor. “What’s going on?” he said, hovering over me.

He sat down and rubbed my back. Then he lay down on the floor and hugged me.

I was a sucker for affection. I hugged him back and blew snot into his shirt. “What do you wanna do?” “Die?” “I mean tonight. Your mom says no curfew.” He made an effort to use a cheerful tone. It was adorable. “She said you can stay out as long as you want as long as you come home happy.”

“In that case I wanna get so high that I don’t understand anything.”

That night we had sex on dope. Neither of us could finish. We just kept doing it because there was nothing else to do and we were stuck in the rhythm. At one point I thought I smelled smoke but figured it was part of the high. Plus my head was in the pillow and I couldn’t see anything. When I turned on my back I saw smoke behind Jake and said “There’s smoke” but Jake didn’t react. Smoke filled the room. “There’s smoke,” he said. “I told you.” We moved like sloths but managed to get out of the shed with our clothes in our arms. Smoke poured out the door behind us.

“Let’s go.” Jake walked toward the car. I stood there, watching the shed burn.

From the front of the house he yelled, “You coming?”

We fled the scene as if we started the fire ourselves. There was a sense of urgency, like we just robbed a bank. Maybe because we were high, there was an air of guilt around what happened. I knew Jake had the same thought. He raced aimlessly and his car hollered. He was shirtless and I was in my Victoria’s Secret thong. The scene made me feel like a mad Gregg Araki heroine. He rolled the windows down and we laughed. Pleasure startled me, like a bucket of ice falling on my head. I kissed Jake on his hands and his arms and his neck. He parked in front of some pool hall. He said he couldn’t drive with me exciting him. I was like, what are you gonna do about it? I crawled into the backseat and he followed me. I sat on top of him and went wild. Usually his feelings ruled but I didn’t consider him. I’d get my kicks. When I came I was loud and didn’t care that there were people around.

“You scare me sometimes,” he said.

“You don’t need to flatter me, you already got laid,” I joked, pleased with myself.

Was I in my brain? Or my whole body? Inside my eyes?

We got dressed and went inside the pool hall. As we walked in we were greeted by tweakers and truckers in camo. They didn’t bother us or ask for ID. Jake got us beer while I tried to pee, but couldn’t. In the bathroom mirror I was demonic and immense. I looked deep into my eyes and watched my pupils become huge. “This is you,” I said to myself, “I am you.” I tried wrapping my head around the concept of myself thinking about myself. Where was Kat? Where did she live? Was I in my brain? Or my whole body? Inside my eyes? Someone knocked on the door. “Miss? You drowned in the toilet?” Jake said I’d been gone forever. We played a few rounds of pool and I won once.

The next day Mom asked why I smelled like a fireplace and after a dumb pause I said, “We went to a barbecue.” Only then I grasped what had happened. If it weren’t for the smell of smoke in my hair I’d swear it was a hallucination.

TEA HACIC-VLAHOVIC is a writer, TV host, and filmmaker, and the author of The Life of the Party (2020) and A Cigarette Lit Backwards (2022). She lives in Santa Monica, California. Copies can be purchased here or here.