Crying into the soup 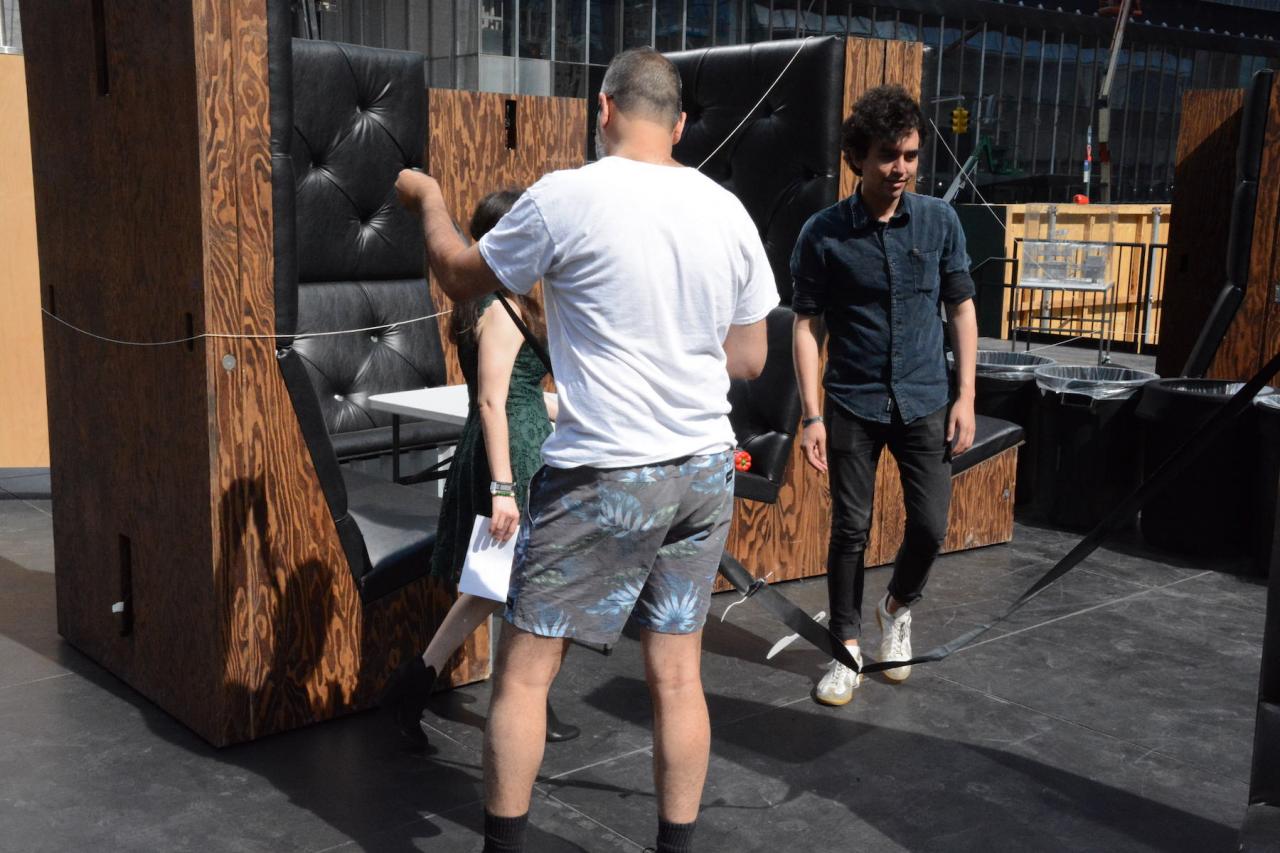 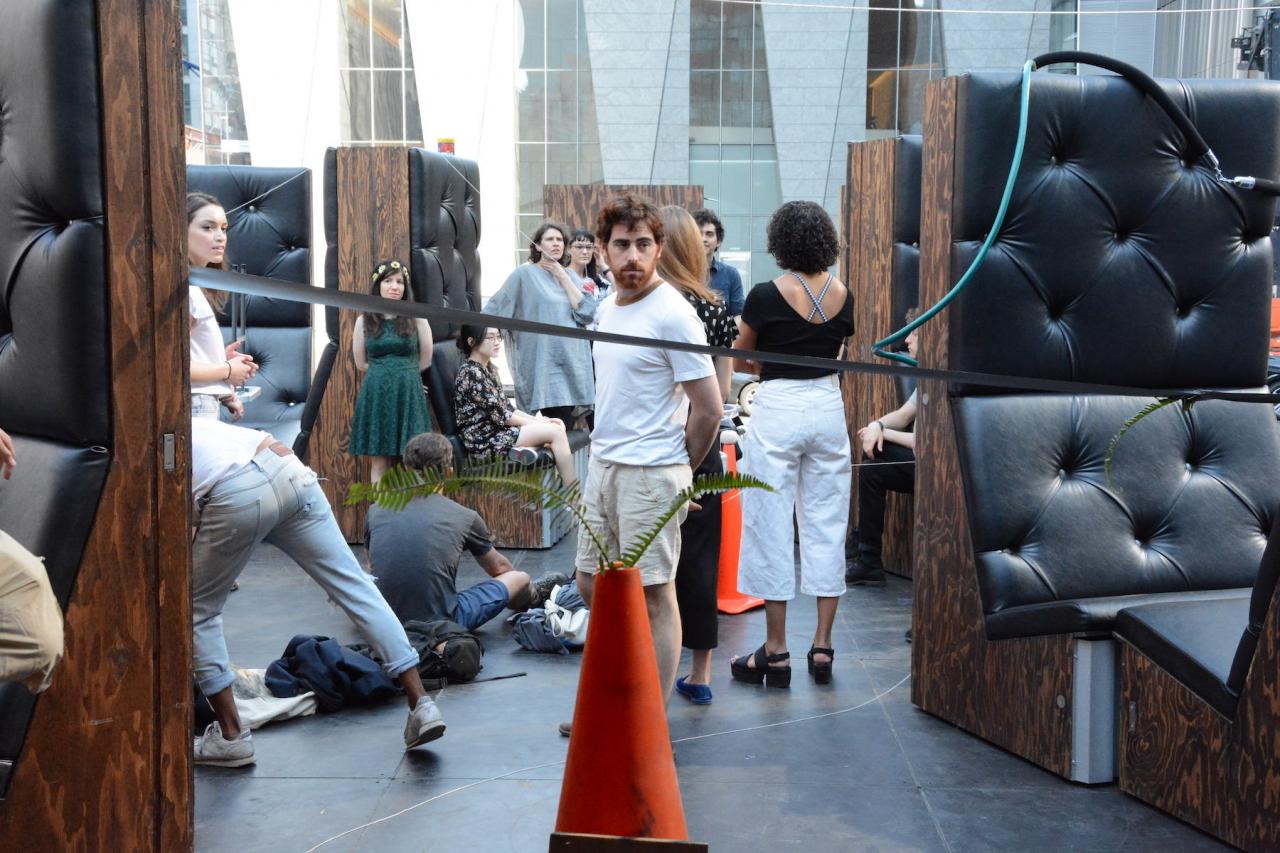 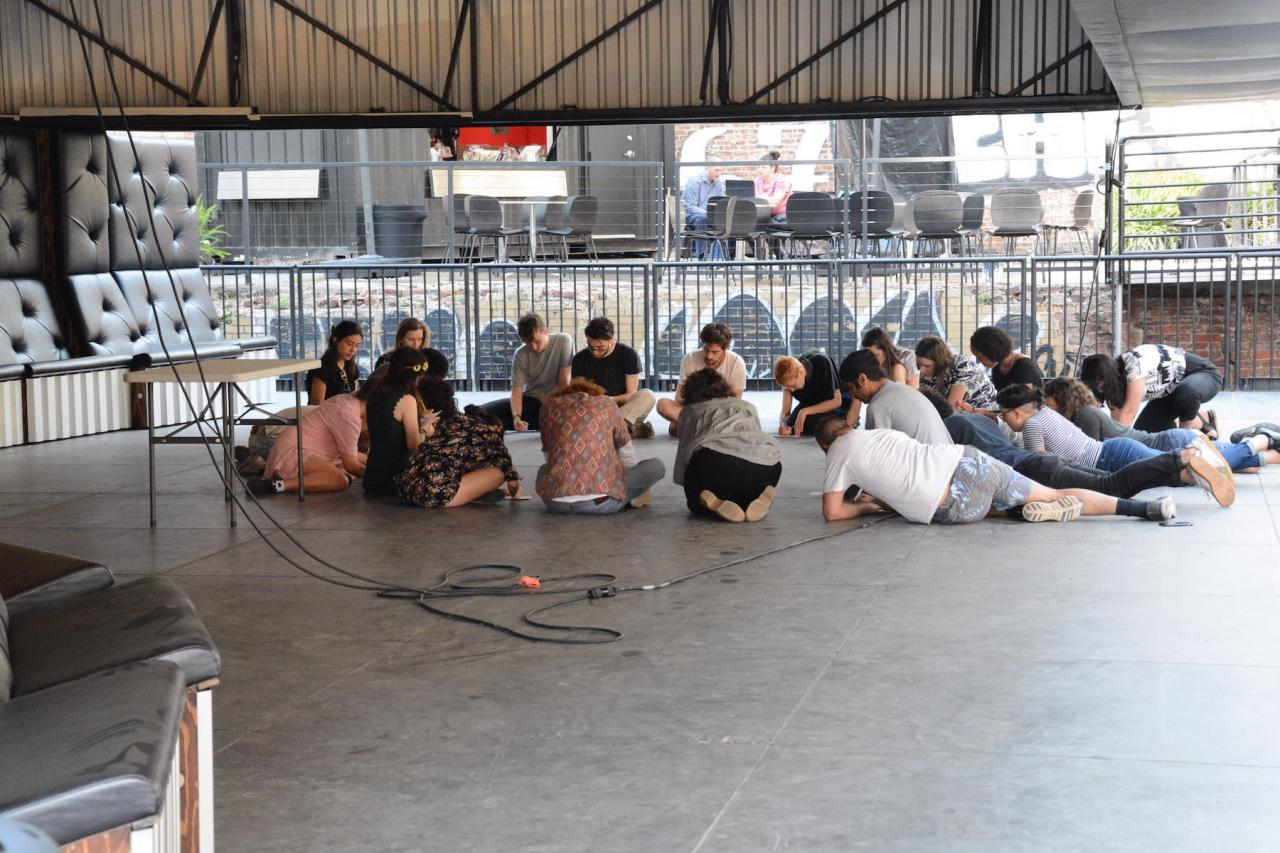 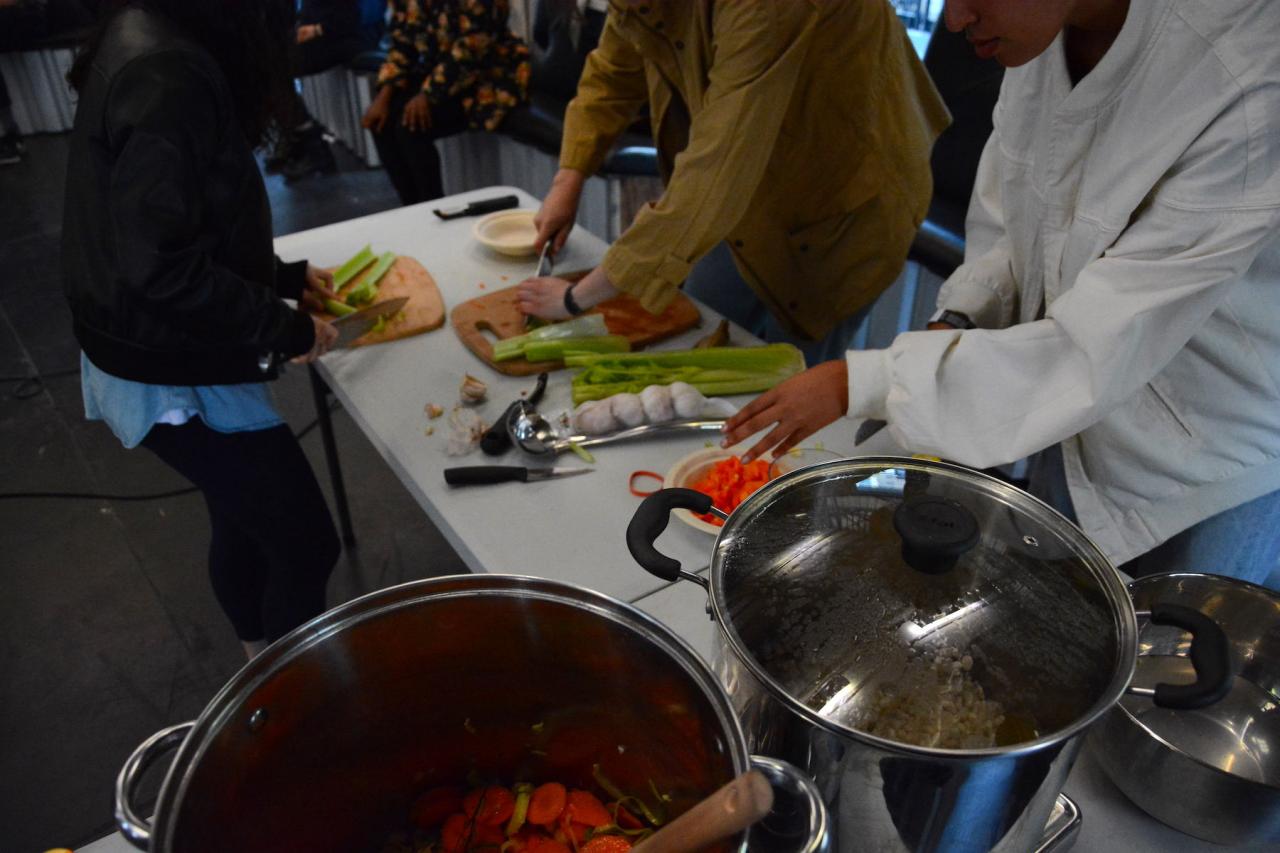 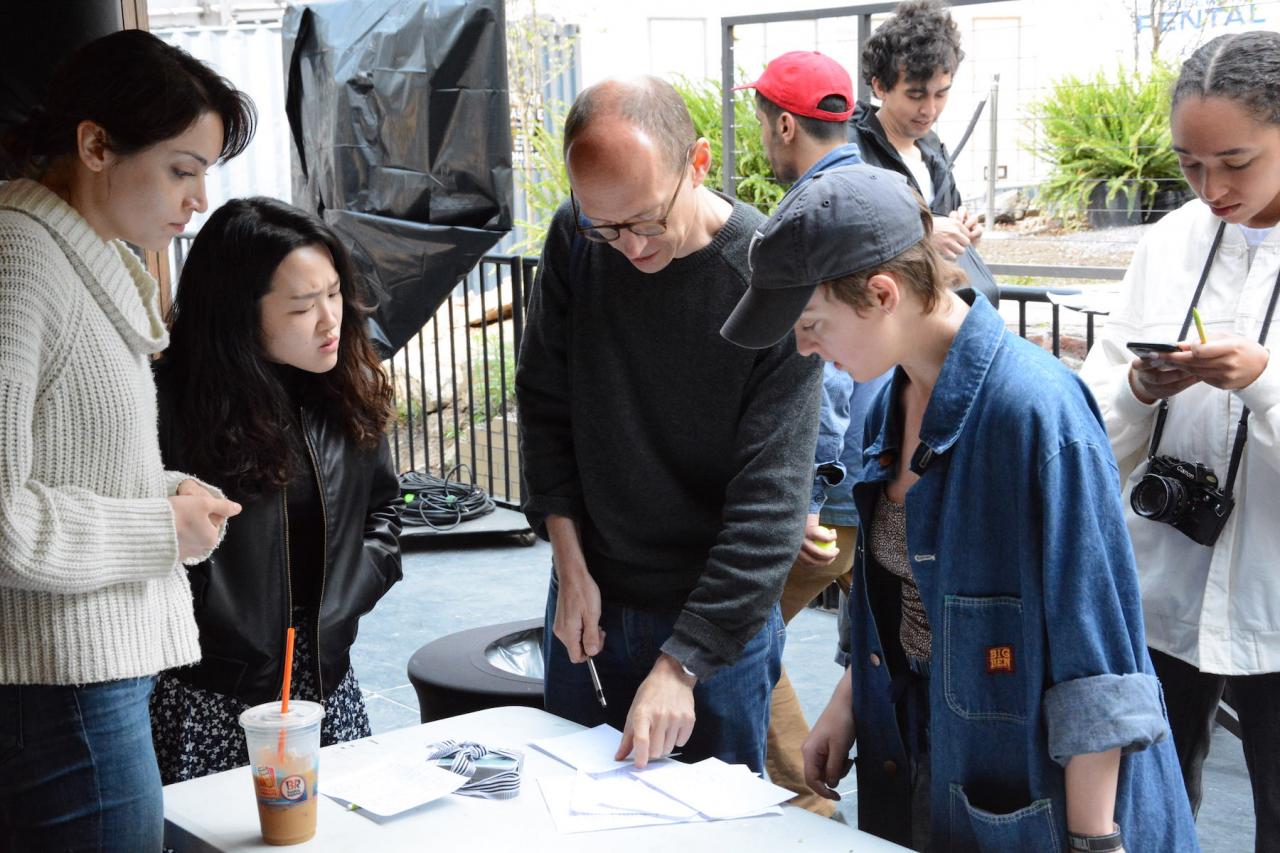 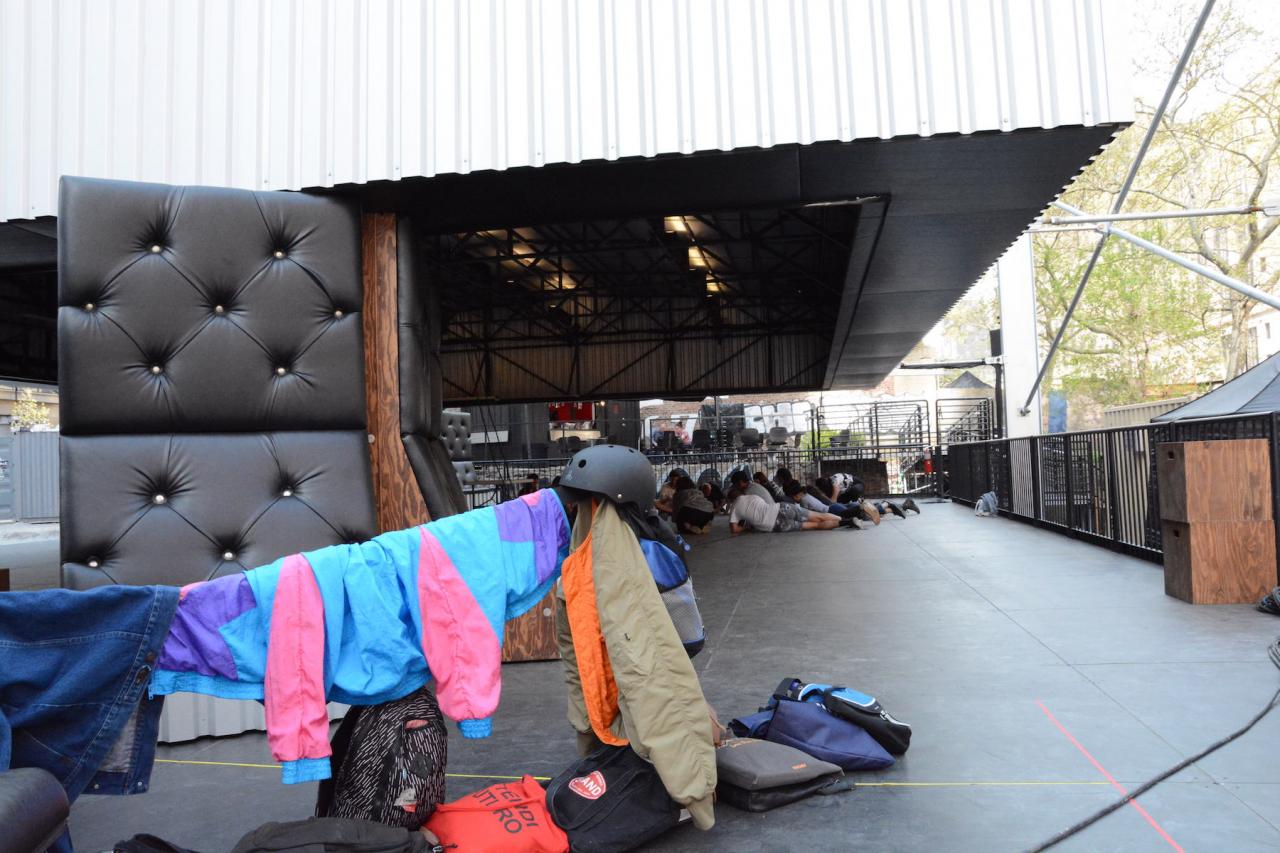 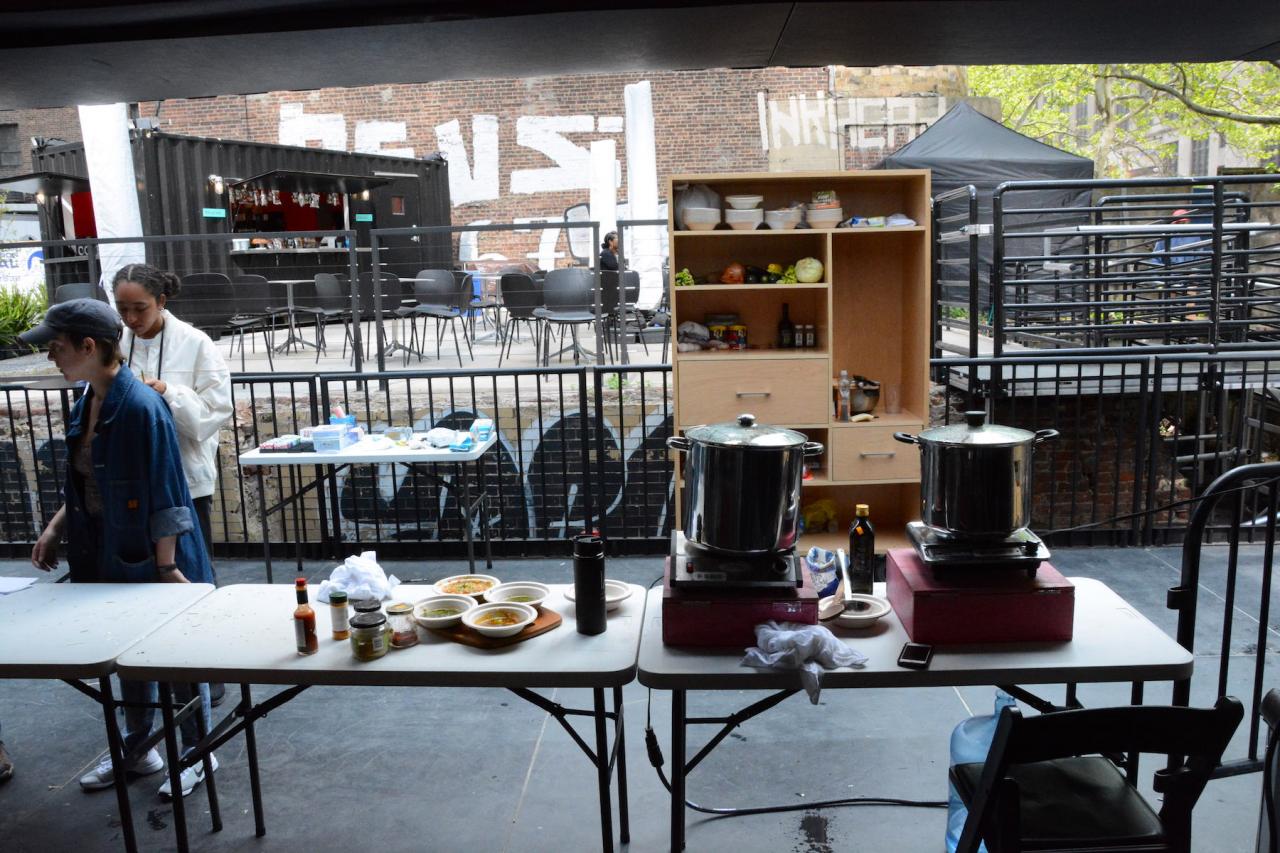 An interview with Asad Raza, D. Graham Burnett and Jeff Dolven about their experimental project Schema for a school which was part of the show A Prelude to the Shed in New York.

By night, the two-week programme Prelude to The Shed (which was held in a temporary structure on an empty lot besides New York’s gargantuan Hudson Yards development, where Diller, Scofidio + Renfro’s multidisciplinary art space The Shed will open next spring) hosted performances by Yves Tumor in a lightning storm and Arca in the pouring rain; by day it was filled with dances choreographed by Tino Sehgal twisting into duets by William Forsythe and battles between Reggie Gray’s D.R.E.A.M. Ring dancers. In the mornings, however, before the space opened to the public, it was taken over by artist Asad Raza, historian of science D. Graham Burnett, poet and academic Jeff Dolven and 27 specially chosen students for their ongoing Schema for a School project. Since their first workshop at Princeton in 2013, Raza, Burnett and Dolven have been exploring more radical, collaborative and physical ways of exploring complicated texts and ideas. Having touched down in Ljubljana’s Biennial of Graphic Arts in 2015, and Villa Empain, Brussels, in 2016, their Schema for a School now arrives in the heart of Manhattan, where they’ve been joining their students in a fluid curriculum of soup-making, singing, breathing exercises, moshing, wild games and more.

We’re sitting here in the third incarnation of Schema for a School. How did this project begin?

Asad Raza: In 2015, Nicola Lees invited me to do something for the Ljubljana Biennial, and I had a thought of the school, especially experimental pedagogy, as an interesting thing. I asked Jeff and Graham to collaborate on this, as they probably know the subject much, much better than I do. But I was interested in making some formal conditions, let’s say, under which an experimental school could flourish inside an exhibition. I think of these as sketches for an institution that would be up to the 21st century somehow, a multivalent cultural institution that could do exhibitions, that would have education, but the education wouldn’t function in the way that education departments do right now, you know?

D. Graham Burnett: The timing of Asad’s invitation was great, because over the years Jeff and I had developed and taught several experimental courses at Princeton in a graduate programme called IHUM (Interdisciplinary Doctoral Program in the Humanities). We, too, had been thinking about the relationship between art spaces and teaching/learning spaces. In fact, Asad had even come down and done a session with us. So the idea of a collaboration came easily. Jeff and I had been especially focused in our classes and other projects on experiential exercises with texts — on doing things with critical and literary materials. We were frequently looking for ways to suspend or arrest the reflexive move to interpretation and/or critique, to create occasions for other things. In our class on “Experience,” for instance, we didn’t just read our way through the dominant theorists of experience (from Montaigne to Agamben); together with the students we worked to make “experiences” in the key of each thinker. Asad’s invitation gave us an opportunity to stretch and extend this work. We brought a set of our graduate students; Asad gathered an amazing group of young people in Ljubljana, and we circled up. Day after day, we worked together, developing experiential exercises out of a shared “punctum” — a source that was often, but not always, a written text.

Jeff Dolven: That’s a central conceptual category for the enterprise: an exercise as something that hovers in-between practical action and scholarly reflection. We’re often working with a punctum that you might otherwise approach in a seminar setting. So, we keep asking, what if a seminar setting were not the only way to get at, and into, a complicated artefact, be it a text or an image or a song? The exercises that we took to Ljubljana, and have been experimenting with here, they’re not quite games, they’re not quite simulations, they’re not quite essays — maybe they’re almost like that, experimental essays. When they work, they allow for a group of people to discover a text with minds, and bodies, and one another, in a kind of a somaticized [relating to the body], interpersonal curiosity.

Graham: But it’s not all thought-play. An essential part of the architecture of our days in Schema is making soup. On a typical morning we begin by cutting up some vegetables, getting the pot on the stove, and as we do that, we start talking about whatever the punctum is for the day. The soup boils across the two, two and a half hours of the session while we work on our exercises. Then we finish by sitting back down all together to talk and eat the soup. It sounds kind of quirky, but it’s an invigorating juxtaposition to be rolling up your sleeves on a Derrida passage surfacing the paradoxes of hospitality while also making sure that you’ve adequately seeded the tomatoes.

Why did you want to bring education into this art setting?

Asad: Contemporary art is already beyond purely visual contemplation and towards a multisensory kind of experiential practice, and so it’s powerful to bring in this whole set of activities that comes out of learning, teaching, and that has its own history, of course, in which many artists have also taken part. We’re trying to add to that history allowing movement, breathing, cooking and texts to come in the door.

Graham: I come out of the history and philosophy of science, and there’s a really interesting moment in the seventeenth century — a moment that’s long been paradigmatic for the field. It’s that moment, to do the cartoon version, when Galileo basically says to his colleagues in Padua: “Guys, you know what? This whole thing about writing endless commentaries on Aristotle’s Physics — it’s really great. Don’t stop! Stay at it! But I’m gonna go ahead down to the Arsenale, and sort of hang out and see how they load the ships and use cranes and some stuff like that. I have a hunch that this hands-on stuff might be maybe a lot more relevant to the work of understanding statics and dynamics than, you know, yet another commentary on Aristotle. But good luck with that.” So I am hamming it up here, but something like that can be understood as the birth of empirical/experimental inquiry as distinct from bookish practices. Something like that is the split between the world of the sciences and the world of the humanists. The text people get left behind in their garrets, sitting still with their tomes. The other folks start making laboratories and performing experiments. It has always seemed to me a little arbitrary that it worked out this way. It could have been otherwise. I am drawn to the idea of a remix, and this project, for me, is about that.

We’re speaking on Friday, and your School closes on Sunday. How will it conclude?

Asad: We coalesced into a pretty cohesive group. At the very first meeting there was a strong aura of, “It’s 2018, who are these other people? Do they have similar political sympathies to me? Are they on my side? Can I trust what’s going on here?” By now it doesn’t feel like that at all. And so on Sunday we’ll have to say goodbye to that thing that got created, that social fabric.

Jeff: And figure out how that community will function in the looser weave of our dispersion, as opposed to the tight weave that we’ve had together over this last two weeks.

Graham: Crying. And soup. Holding each other, soup.

Jeff: Crying into the soup.

ASAD RAZA is an artist based in New York and Leipzig. D. GRAHAM BURNETT and JEFF DOLVEN are professors of history and literature at Princeton University.

DEAN KISSICK is a writer based in New York.