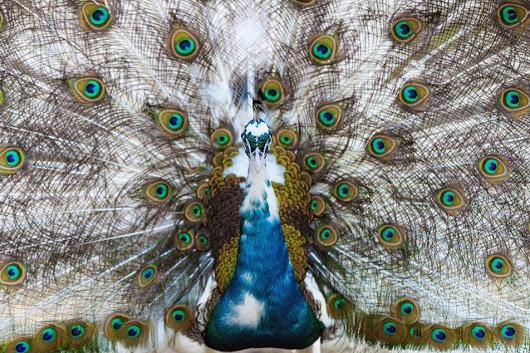 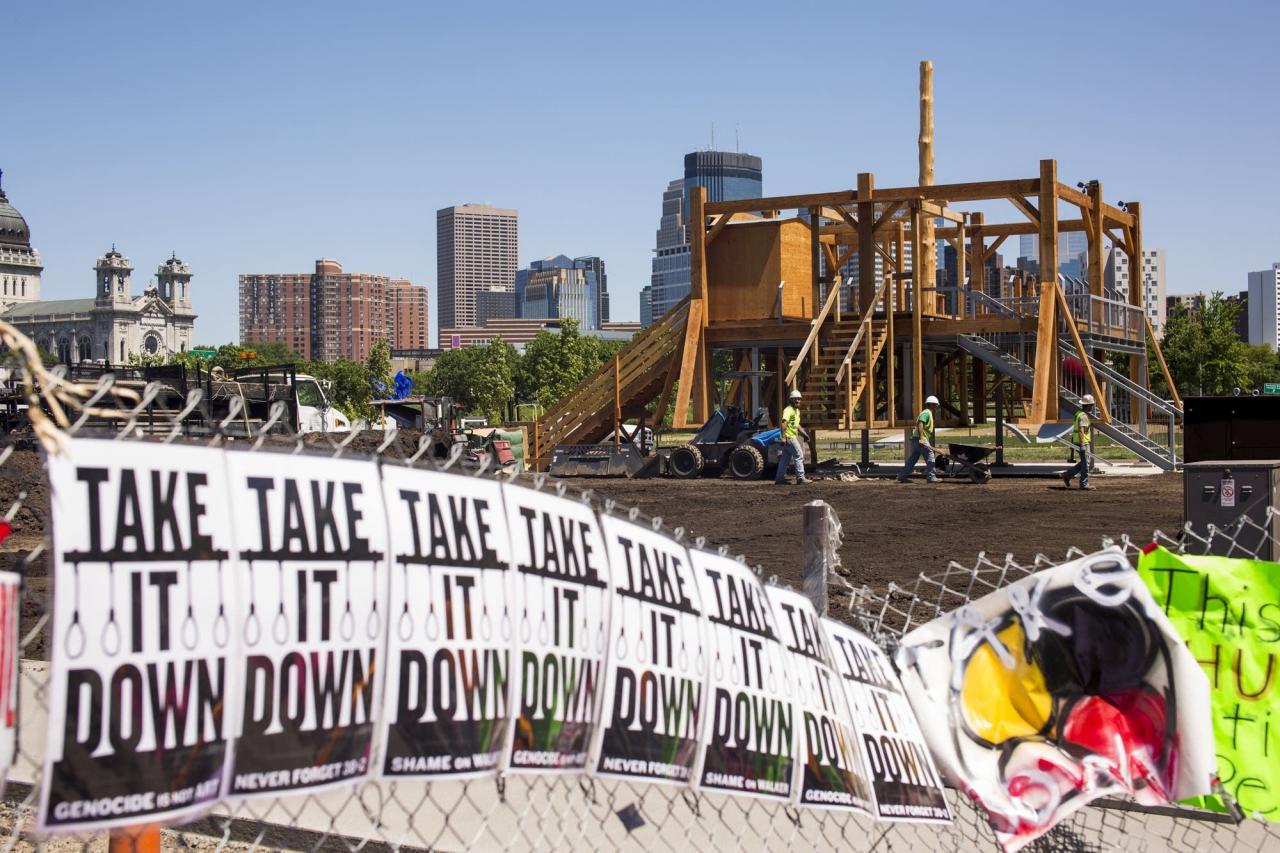 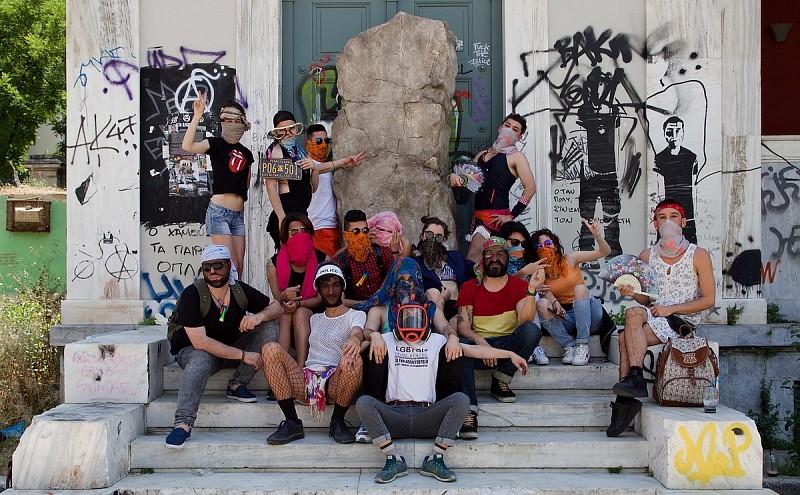 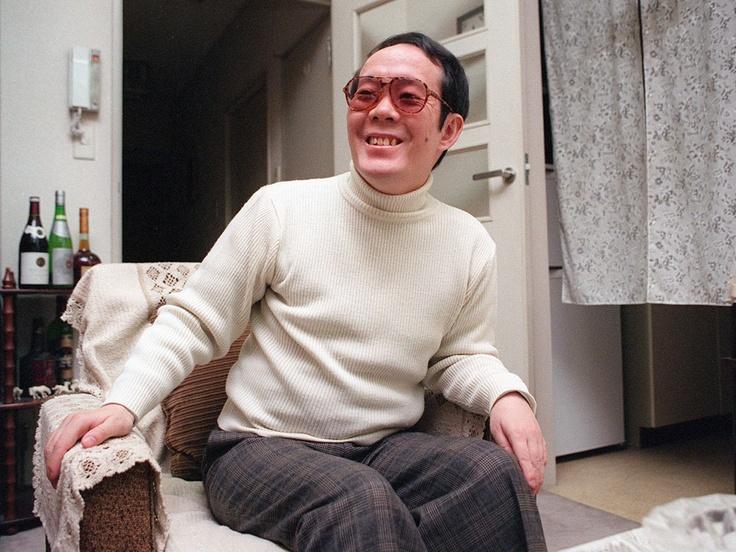 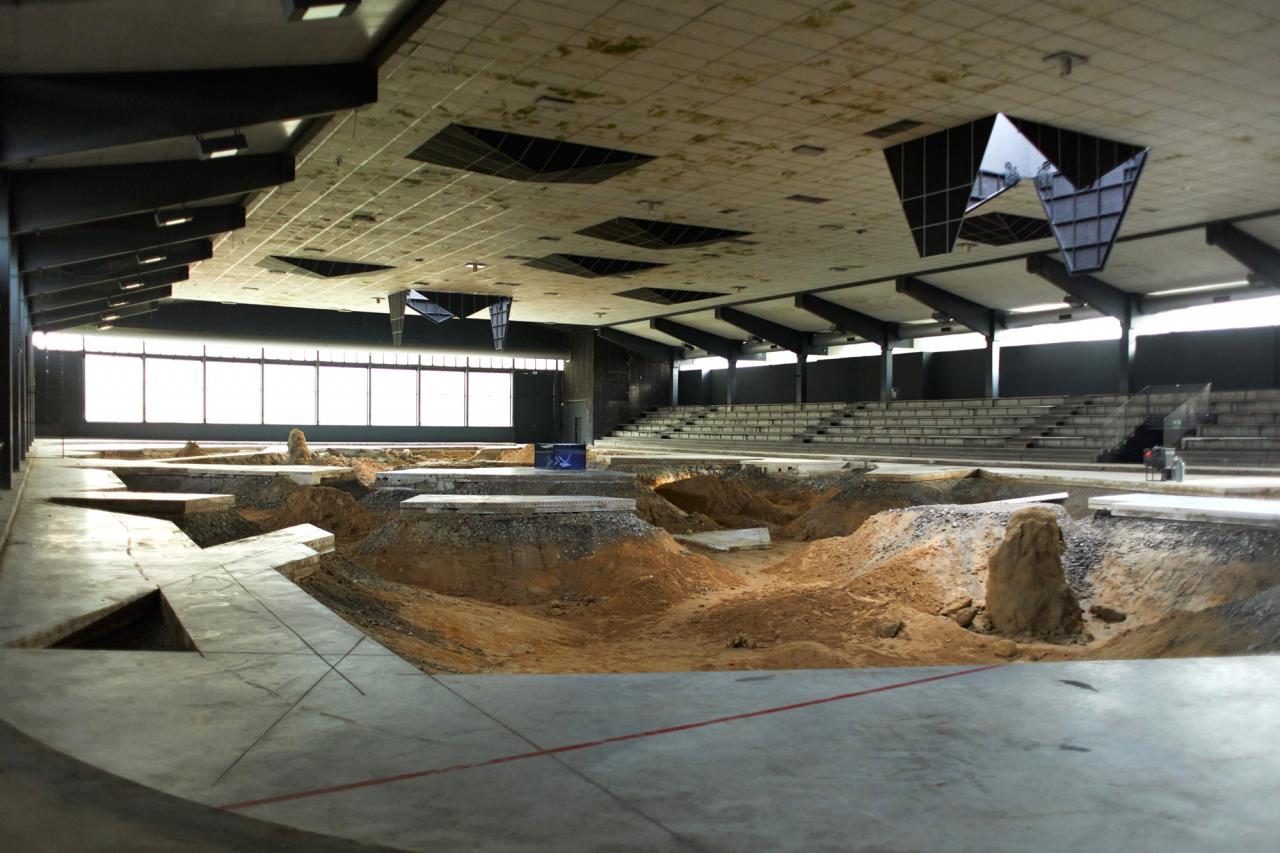 In this month's column, Dean Kissick joins the dots between a runaway dog and shy peacocks in his diary of the preview days of documenta 14 in Kassel
and Skulptur Projekte Münster.

Five years ago, on my way to Pierre Huyghe’s installation in the woods of Kassel’s Karlsaue Park, I was passed by a pink-legged dog running in the opposite direction, soon followed by a flustered Hessian invigilator asking if anyone had seen a runaway dog with a pink leg. The dog was a part of the work, but the chase was not; at least not an intended part.

Also in the park that year, in another clearing in the woods, was Sam Durant’s Scaffold (2012), a monumental installation made up of seven reconstructions of gallows used for historical executions in the United States, including the 1862 hanging of 38 men from the Dakota tribe in Mankato, Minnesota. This summer the Walker Art Center in Minneapolis, less than two hours’ drive from Mankato, chose to install the work in its sculpture garden and when the Dakota heard about this they successfully protested the decision: Scaffold has since been dismantled by an unholy alliance of Native American tribal elders and Midwestern art technicians and, according to some reports, might yet be ceremonially burned. “My work was created with the idea of creating a zone of discomfort for whites,” wrote Durant in a self-flagellating, grovelling open letter, “your protests have now created a zone of discomfort for me. In my attempt to raise awareness I have learned something profound and I thank you for that.” He has been hoist, in a variety of ways, with his own petard. Five years ago Scaffold was a centrepiece of documenta 13, now it’s waiting to be ceremonially burned by tribal elders. Different times!

Something similar happened in Athens this summer, to Roger Bernat’s plastic and fibreglass replica of an Ancient Greek monolith known as the Oath Stone, which, midway through a performance at the Polytechnic, was impounded by the group Lgbtqi+ Refugees in Greece, to whom it had been temporarily entrusted, as a protest against what they described as the artist’s, and the exhibition’s, “fetishization” of asylum-seekers. Afterwards they released a statement explaining, with blunt clarity:“Your stone is supposed to give us a voice, to speak to our stories. But rocks can’t talk! We can! So we have stolen your stone and we will not give it back.”

Alongside the dramatist Roberto Fratini, with whom he was collaborating, Bernat responded with a long and dissonant statement, in some places smug, in others angry and paranoid (claiming in one passage that those in the group were merely puppets of some shadowy cabal of “organizers” seeking “to put in practice what they remember of a superficial reading of Guy Debord”), and somehow arrived at the insincere conclusion that the stone “takes its value from the importance people give to it. And we must say that the Lgbtqi+ Refugees collective was the most willing to surrender to the temptation of giving some kind of symbolical value to that reproduction. We’re grateful for their enthusiasm.” And, with this expression of gratitude, I was reminded of a Guardian headline from February 26 concerning performance artist Abraham Poincheval’s decision to spend a week inside a 12-tonne boulder in the Palais de Tokyo: “French artist living inside a rock surrounded by excrement: ‘I feel completely at ease.’”

On Friday evening I go to Tofufabrik, the old premises of an organic tofu company from Kassel, to watch Commensal, a film by Véréna Paravel and Lucien Castaing-Taylor on the subject of Issei Sagawa, a Japanese cannibal who, while studying in Paris in 1981, murdered and ate a Dutch student named Renée Hartevelt. Sagawa drew and published a manga about the experience. In the film he leafs through this comic and says things like, “I want to be eaten by Renée. People must think I’m mad. It’s because I ate Renée.” Beside me a woman is watching while eating a bratwurst. She sits and watches the entire film while slowly eating her bratwurst.

The next day I go to Münster.

Writing my diary of Athens I suggested that Edi Hila was “the spirit of documenta 14 personified: a little-known avant-garde painter working on a turkey farm under duress in 1970s socialist Albania” and I find myself reminded of this scenario by, of all things, the Pierre Huyghe installation that forms the centrepiece of Skulptur Projekte Münster. Huyghe has excavated a former ice rink on the periphery of the city into a wasteland of smashed concrete floors, mountains of dirt, puddles of rainwater, some bees, an aquarium that sings ominous noises, and a roof that opens and closes according to, among other algorithms, the division of human cancer cells in an incubator in the space. I was told there would be peacocks (and no ordinary peacocks; these would be “chimera peacocks” [as shown in the image above] with piebald patterning caused by fertilized eggs fusing together in the womb, meaning, in some cases, that the birds are their own twin) but there are none. One of the invigilators apologises, explaining that all the peacocks were removed after the first day of the professional preview because they were “too scared”, and had since been returned to “the farm”. Everyone present agrees that this is sad, but understands. Who wouldn’t be scared, living in the desolate ruins of ice rink, surrounded by art dealers and bees, under a black, automated roof controlled by cancer cells?

I post something about this and some artists from Los Angeles write to say that the peacocks looked frightened yesterday, that they were gathered high up in the rafters by the windows. An artist from London writes that peacocks don’t live on farms and they were more likely dead. An artist from Berlin writes, “We had stir fried peacock with basil and chilli the other day.” In one of the bleak, muddy troughs of the installation, a woman looks around and turns to me and asks, “What is this supposed to be?” I have no idea, and these days it is hard to make artists explain themselves; unless one steals their work, or asks to have it burned.

Sam Durant's Scaffold at the Walker Art Center in Minneapolis