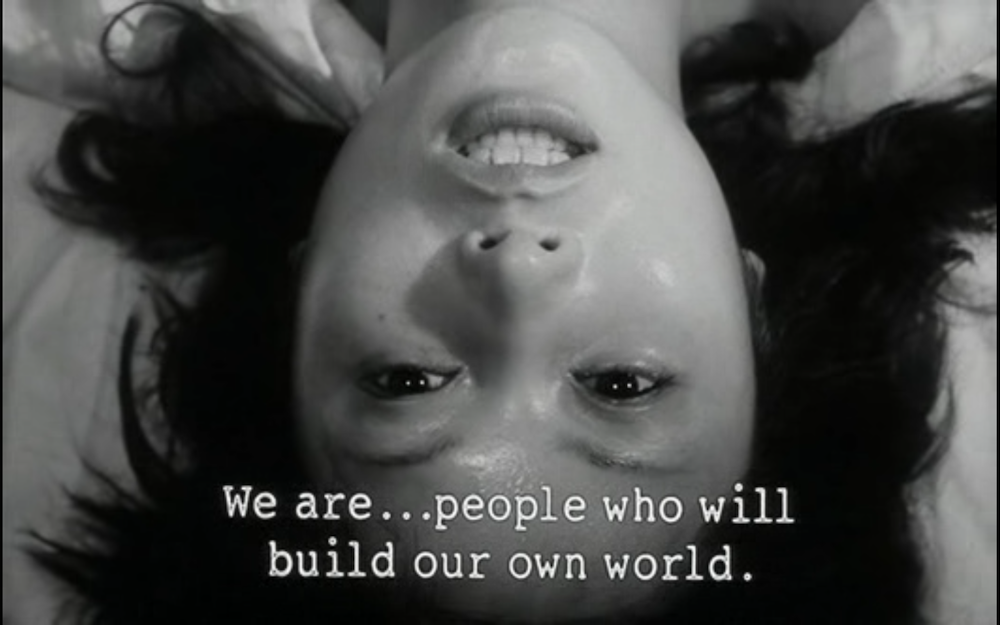 Someone told me that if you do a lot of LSD, it starts to accumulate in the fatty tissue of your spinal column and then, decades later, when you crack your back hard enough, you micro-trip — blasting off, briefly, into some other plane. I’ve never taken acid. The closest analogy to my own experience is that I butt-chugged Baudrillard in undergrad and now, at first mention of virtual reality, I spazz out and start involuntarily quotingThe Ecstasy of Communication [1988]: “Private ‘telematics’: each person sees himself at the controls of a hypothetical machine, isolated in a position of perfect and remote sovereignty … in the exact position of an astronaut in his capsule.”

I can’t help it; It’s a reflex, like gagging or getting aroused. But seriously, this time I mean it: f.k.a. Facebook’s rebrand as Meta, rolled out the Thursday before Halloweekend, is bleak. Who has sovereignty in these privatised telematics, in the metaverse that is to come? And who will be used, discarded like the spaceship’s rocket-booster, left to fall, in a blaze, back down to terra firma?

The exemplar of Big Tech empire, Facebook has been colonising minds and extracting attention since they stumbled on a business model that definitively proved subjectivity and social connection to be valuable commodities. It dictated that these human forces could be ruthlessly sold and manipulated — and that, goddamn it, we’d enjoy the process! This model has proven to have some glaring flaws, evidenced by documents that Frances Haugen made public last month. A report by the Wall Street Journal summarises: Facebook has long been acutely aware that its products cause harm by stoking vitriol and spreading misinformation.

And more subjectively, using it just feels bad. It leads to dark places. Your path might end in a QAnon group; mine terminates at 3am with bad posture and scorched retinas because I lost track of time scouring Marketplace for midcentury side tables again. Not hard to intuit, I think, that whatever “product” this platform claims to offer, they’re in another business altogether: refining the ability to steal mental bandwidth and prospecting for data all the while. Now, the behemoth is expanding its pursuit towards full-fledged immersivity. Meet Meta. Cut to: Zuck looking especially shiny and dead-eyed, delivering the keynote where he announced that his company is making its debut in the worldbuilding business. (Someone, please, for the love of god, give this man some eyebrows. Free PR insight: if an image adjustment is what you’re after, the M-word you’re looking for is “microblading”.)

The most powerful man in the world has a perverted fantasy that one day, our avatars will all be wearing non-fungible grey hoodies.

Meta is a heavy-handed nod towards the “Metaverse”, a term inherited from the 1992 sci-fi novel Snow Crash. It refers to an immersive digital world — in practice, the AR/VR plane — where a thriving global community of users can bool in the immaterial realm, unshackling themselves from the indignation of having a body to drag through so-called meatspace. I’m being dramatic, but only a little. The metaverse might turn out cool — what if we all ended up living on Chris Marker’s Second Life island? — but odds, in light of Facebook’s latest, are that it won’t be.

Zuckerberg patronises when he suggests that “you can think about the metaverse as an embodied internet, where instead of just viewing content — you are in it.” Even more than being cloying, he’s flat-out wrong. If anything, it’s a disembodied internet, primed to become a walled garden where the few among us frolic. But who will tend to the server farms while the rest of us romp in this 3D-rendered game world? What new forms of precarious labour will emerge for those less lucky? Who moderates the metaverse – who will be made to serve, like the figures in Eva and Franco Mattes’ The Bots (2020), as repositories for all the hateful and traumatizing content that these platforms promote by design? The resulting distress, to borrow from tech parlance, is a feature, not a bug.

These questions, and so many more, have sat uneasily in the wake of the announcement. The best take came from digital artist Katherine Fraser: “meta is short for metastasize”. That’s exactly what Facebook has done, cultivating proof-of-concept that the extraction of human attention is the most lucrative business model of the twenty-first century and then growing it until it has nothing left to subsume. Meta’s new ‘verse is not so much a discrete product as a form of infrastructure, a platform where other companies will one day compete for a slice of users’ attentional real estate by shilling goods that range from games to financial services.

The most powerful man in the world has a perverted fantasy that one day, our avatars will all be wearing non-fungible grey hoodies. He promises a whole new world — but we have a world already, and its hardships won’t be solved by virtualisation. Blasting off into another realm — like an acid trip, or Baudrillard’s “astronaut in his capsule” — does nothing to resolve the very present problems Web 2.0 has left us with. If anything, these crises will only be exacerbated under Facebook’s stewardship, doubling down on the psycho-political control that underscores all of its infrastructure. It’s too late to un-invent the metaverse, but there’s still time to contest its centralisation.

ADINA GLICKSTEIN is the digital editor at Spike.