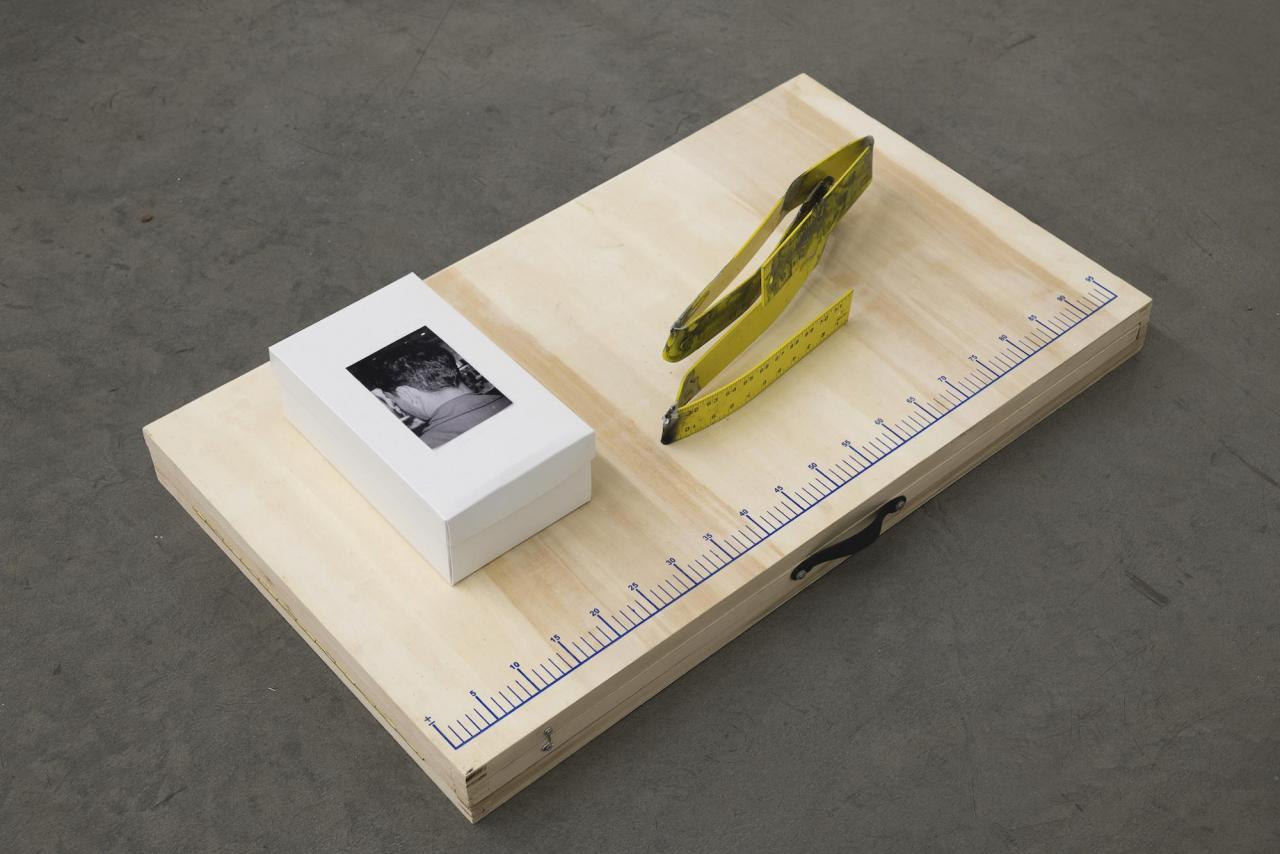 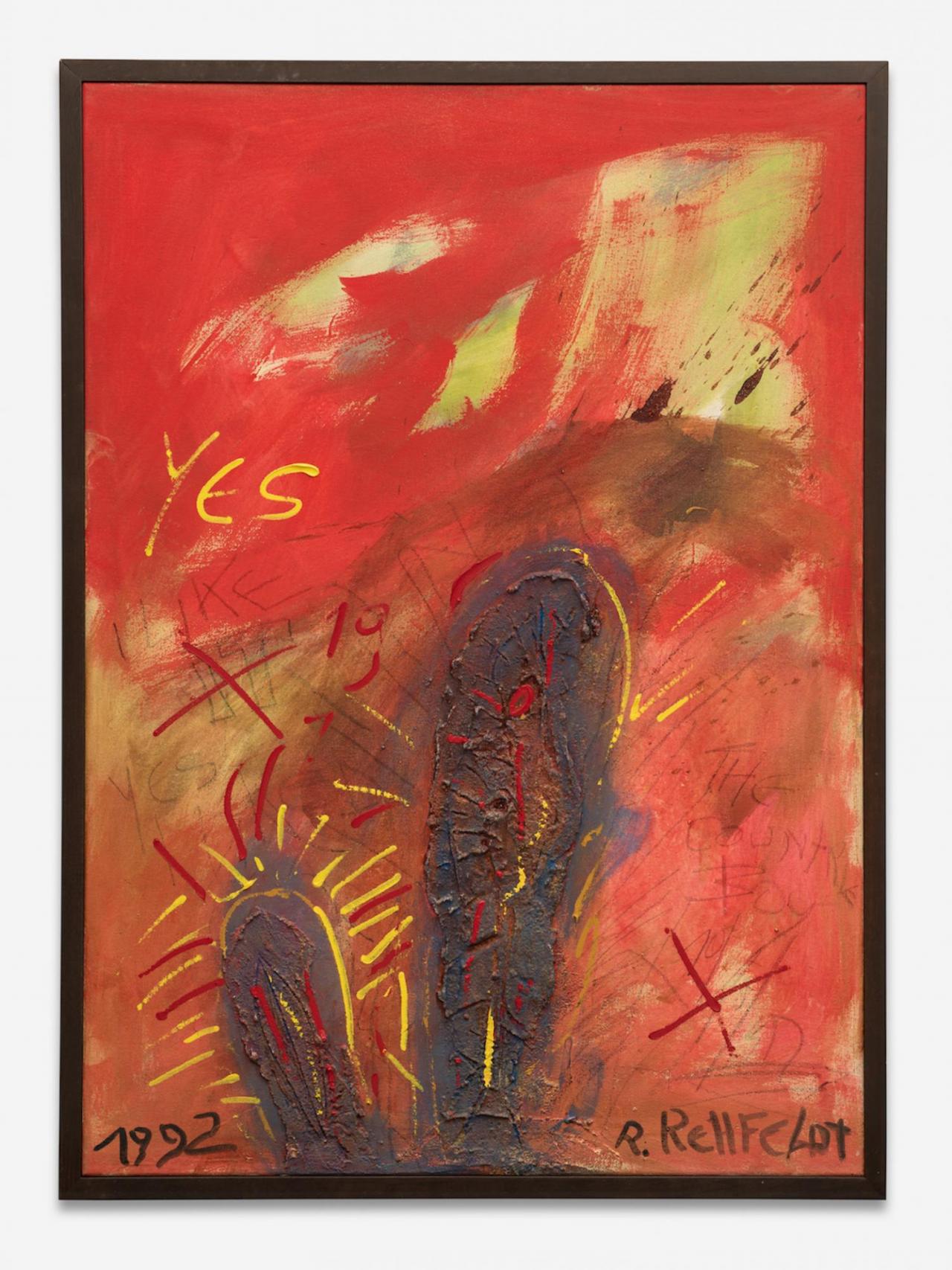 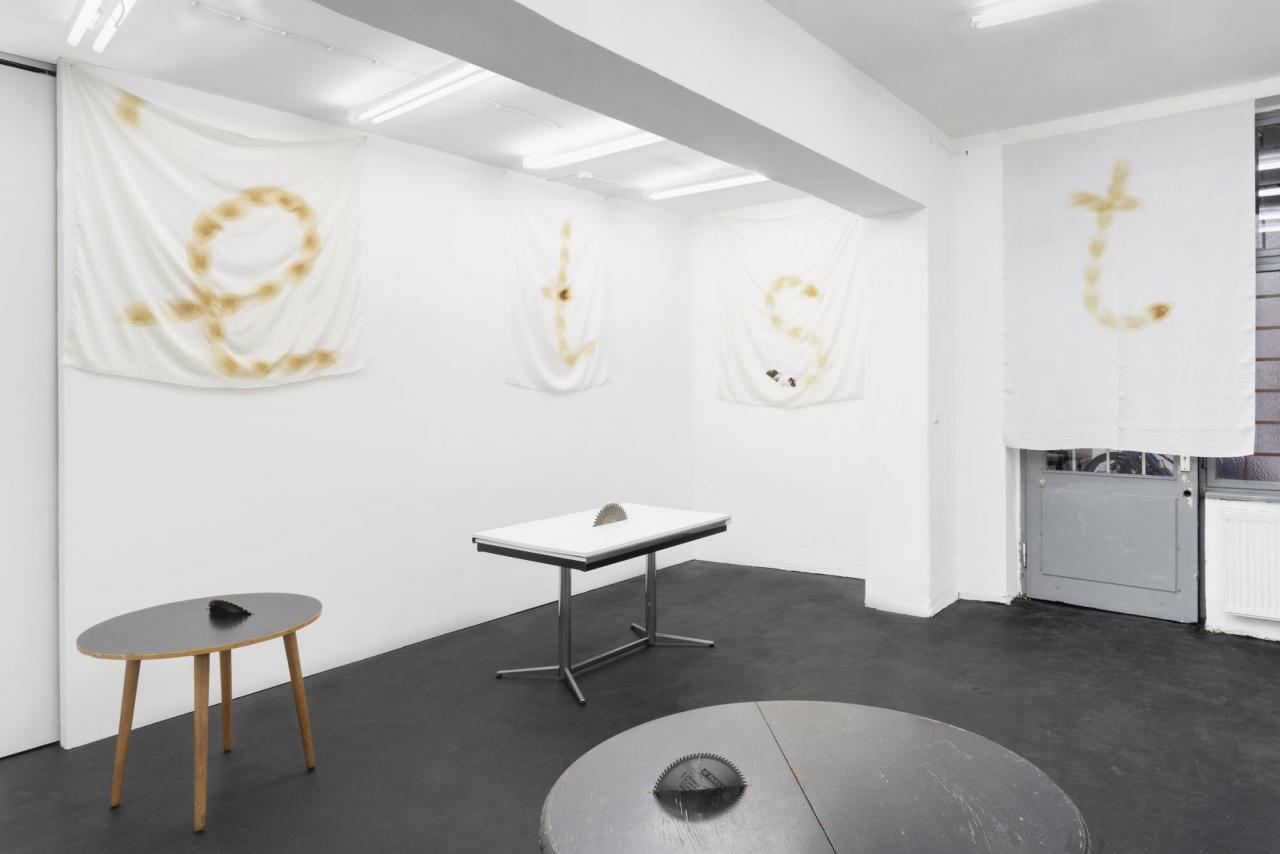 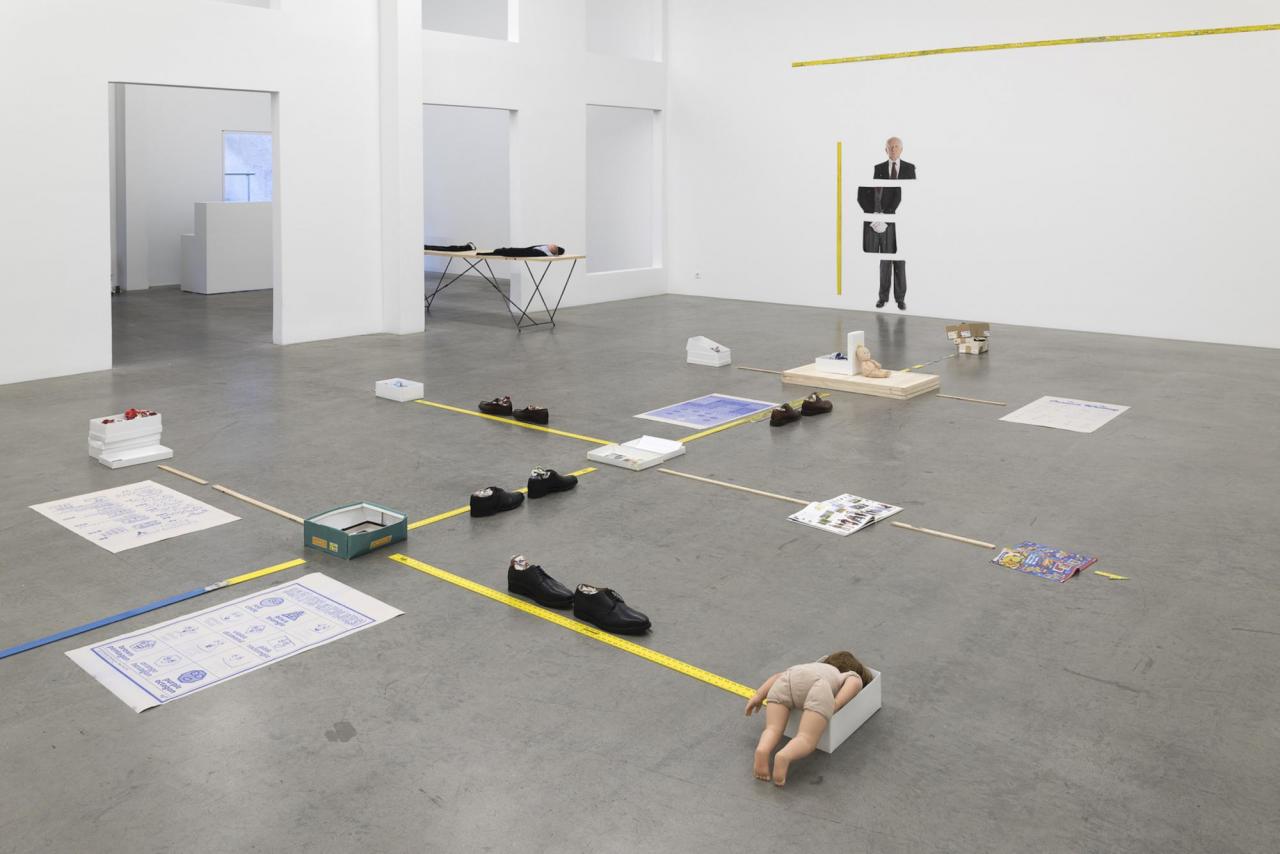 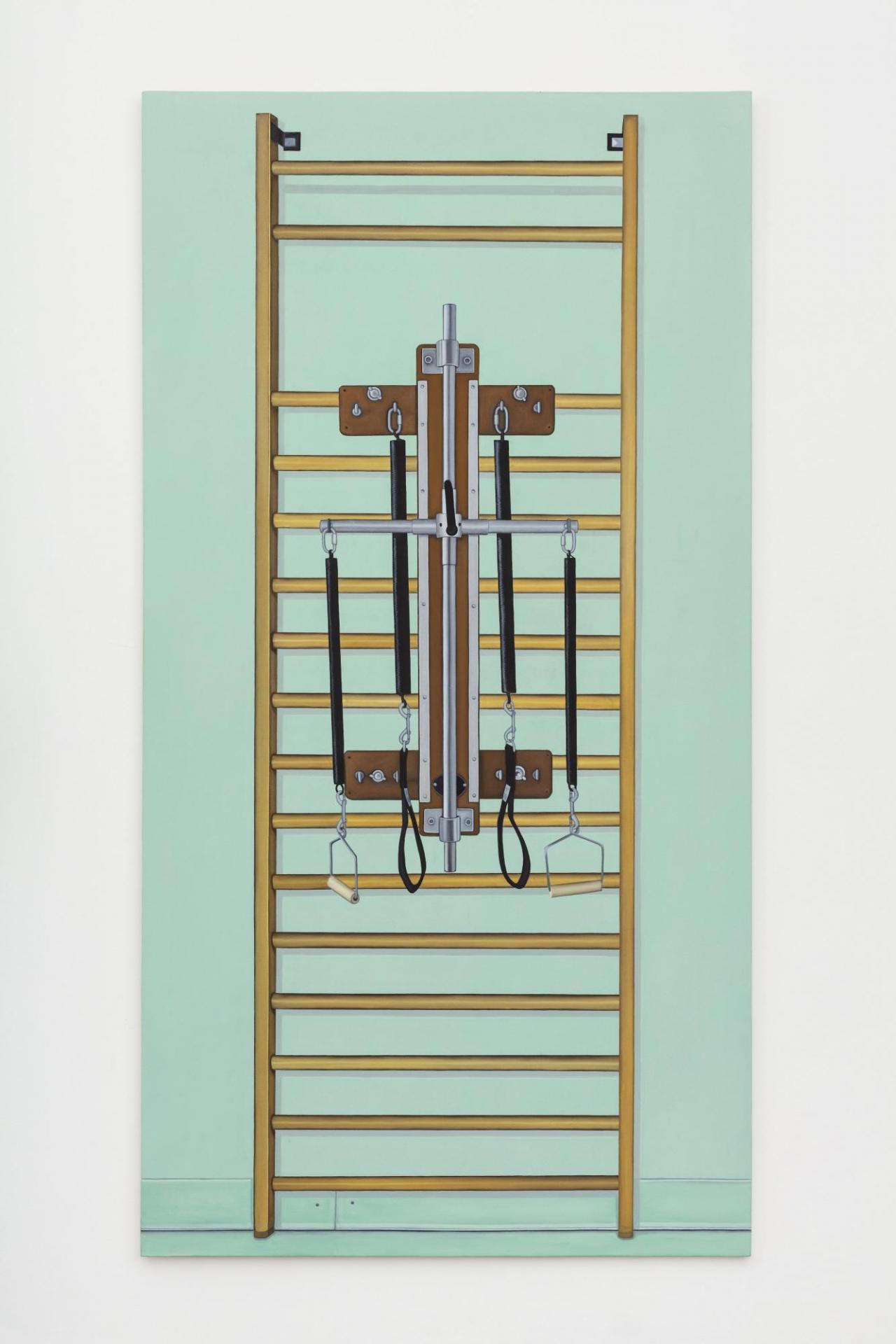 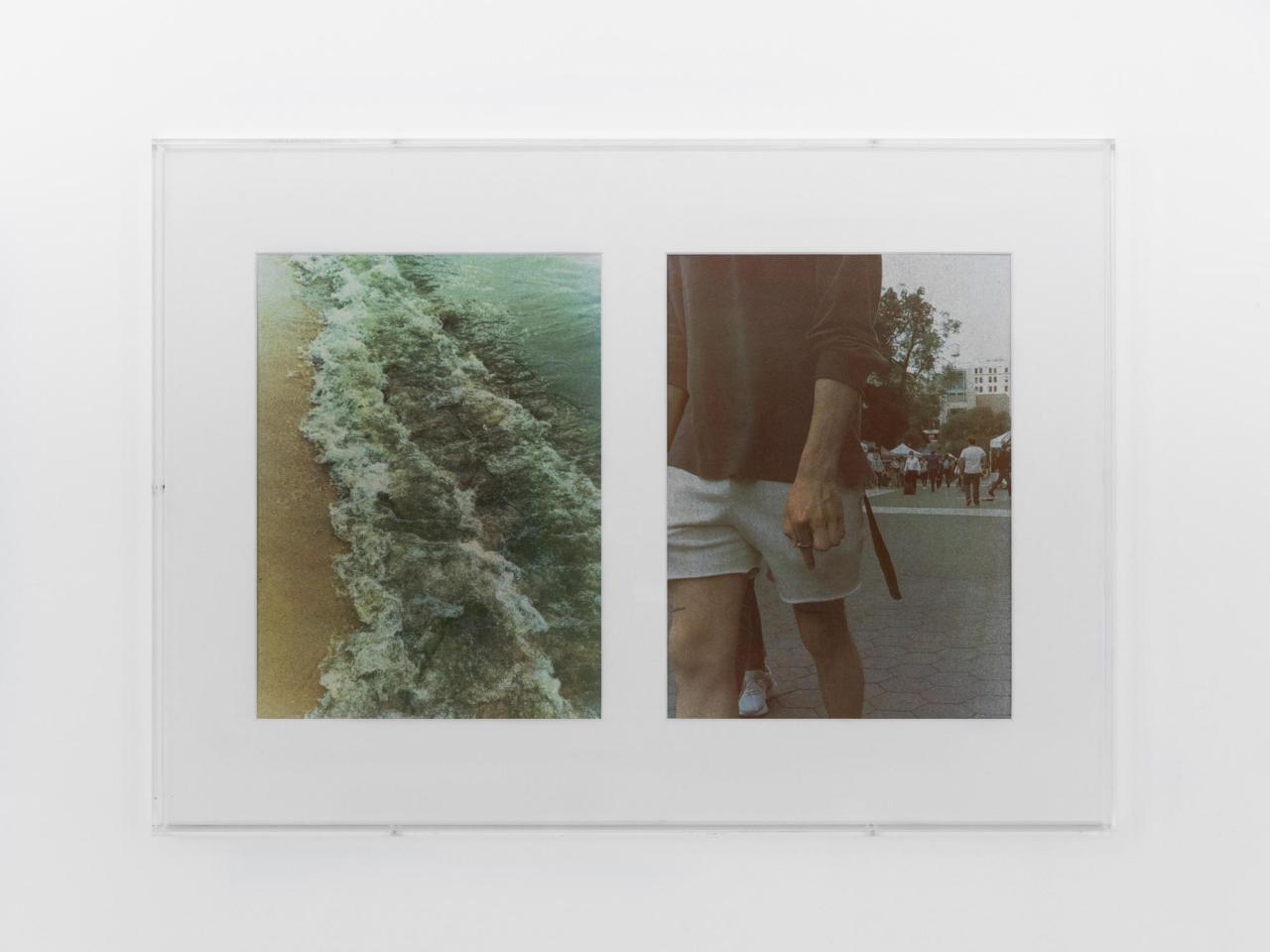 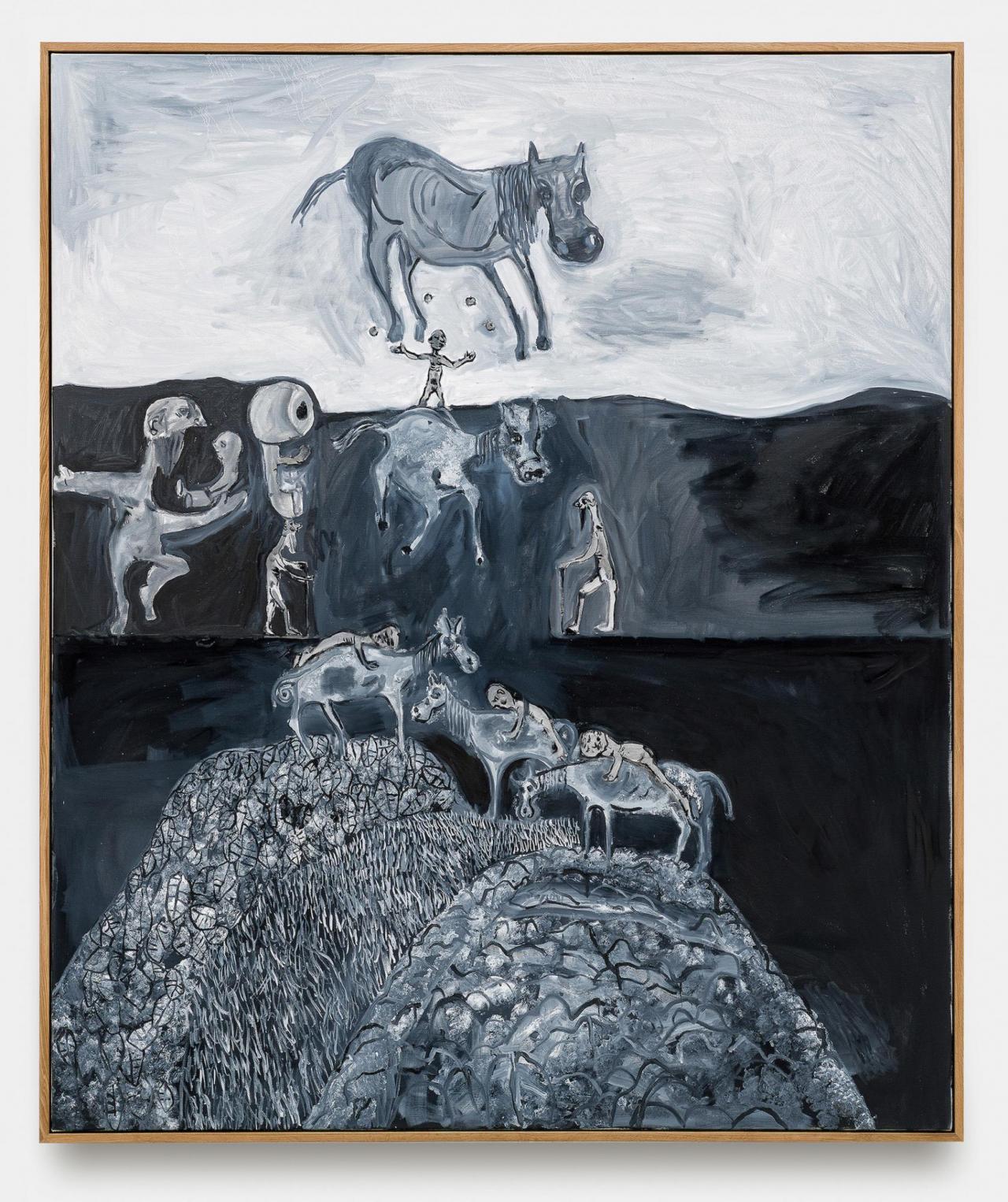 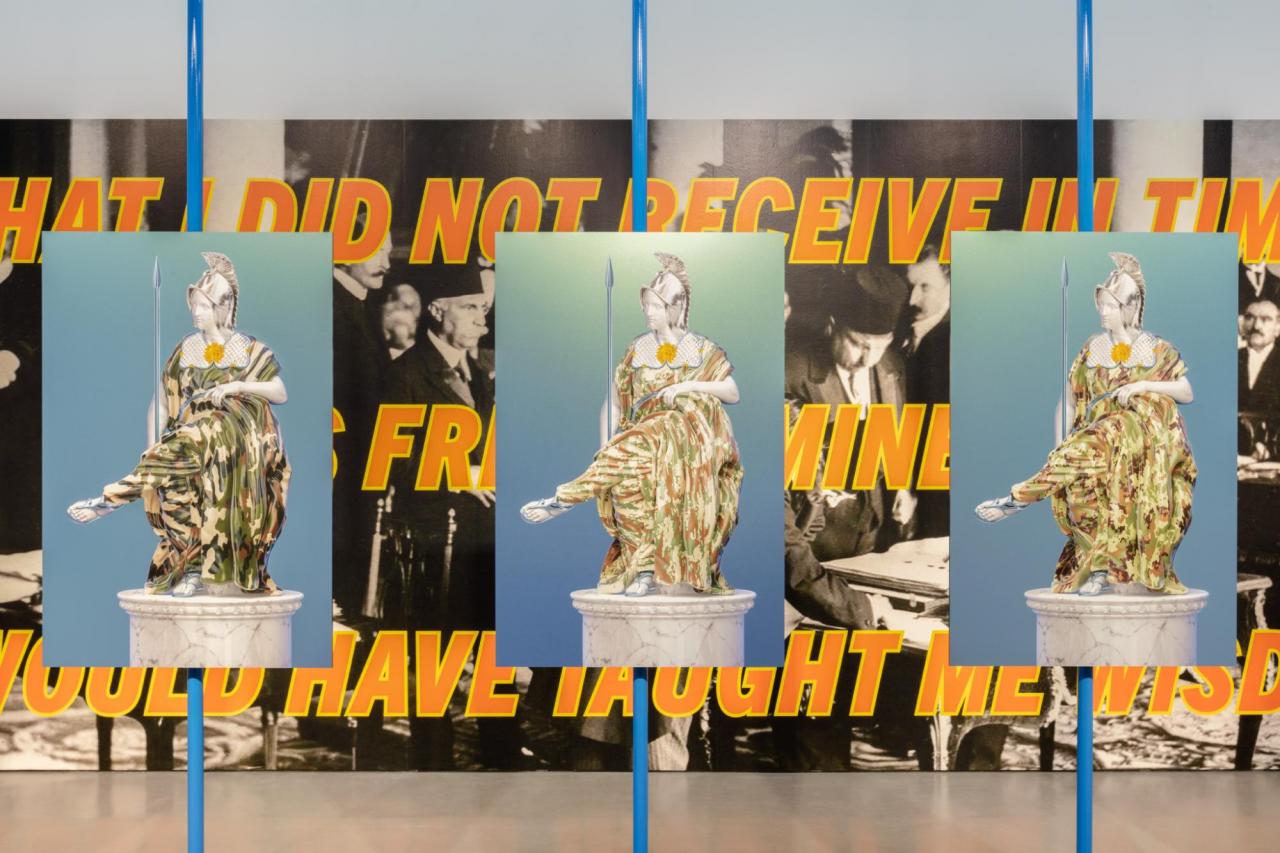 The “new man” is a hysterical promise. After the fall of the Berlin Wall, Robert Rehfeldt (1931–1993) mostly made excited paintings. Yes (1992) disseminates two YESs and one I LIKE, apparently yelled by the two phallic heads, thick like reliefs, at the centre of the volcanic paste-like surface. There is an IT that follows the I LIKE, struck through – is it THE COUNTRY BOY appearing on the other edge of the canvas? Before the Wall fell, Robert Rehfeldt sent mail art from the GDR all over the world. In the postcard that gives its title to ChertLüdde’s exhibition, he still has some hope of escaping the lure to be in the forefront – the new man in the confessional turn. After #maincharacterenergy, yes, we do think of you, Robert Rehfeldt.

The fantasy of escaping from domestic labour smells like ironing went revolutionary wrong. Ironic or not, Phung-Tien Phan (*1983) burned laundry to the point of forming letters (TRIP and LETS) and pierced dining tables (or are they office desks?) with circular saws. Triplets or let’s trip? Is the dream of the good life just cruel optimism? It turns out that trauma theory is not useful. When crisis itself is ordinary, everyone must have their unexceptional coping mechanism to deal with the codes of family and leisure – and just stop dreaming.

There are only men’s shoes on the floor of Galerie Neu. And they are worn, which is how Win McCarthy’s (*1986) questions about how to measure and who measures feel, at first – old hat (shoes?). And yet, in the compulsion, there’s something critical. The scattered installation is made of categorising devices taken mainly from schoolbooks and discount store leaflets – Europe is a land “full of castles”; triangles are black, like magic; Netto is “a place with three times more flavor”. Metal and wooden rulers compose the coordinates on the floor, lending the show its title. Amidst the apparent paternalism (rulers rule with daddy’s shoes, thank you!), we can find a stand, as we see human figures cut out from group photos, obsessive lists of friends’ names, McCarthy’s selfies hidden in shoe boxes, and toddler toys all over. Asking what identity is can be a boyish act that reveals your interpersonal topography (and privilege), and it’s okay to admit it.

Pilates can benefit most people. But ideal candidates are the ones who have back problems, poor posture, or desks jobs. Quite the contrary of ballet. Megan Marrin has painted life-sized wooden ballet bars and Pilates equipment. And they are too meticulously depicted to be (only) ironic. They rarely cast shadows, like symbols, but these objects are also effortlessly inviting. Low- and high-impact labour are juxtaposed and rendered as equally attractive. Obligatory techniques of the self – we begin to understand why "Compliance" is the show’s title.

Sex is a laborious attempt at symmetry. Christopher Aque’s (*1987) sculpture is composed of two identical basins, water flowing from one half into the other, sanitised by a germicidal UV-C bulb. On the walls, six diptychs compare one voyeuristic photograph of a man’s body to an image of water in motion; all were made using the arduous process of gum bichromate printing, which requires the same UV-C bulbs that appear in the work. Can two bodies make one? Jacques Lacan says no. “There is no such thing as a sexual relationship”, he tells us, because (the effort notwithstanding) it is a forced balance, an imaginary fullness. Pleasure has to flow unidirectionally, as a One without the Other.

Tobias Pils (*1971) is obsessed with horses. He says he is not interested in storytelling, but he is probably a fan of allegory, as the titles of his newest paintings suggest. And his compulsive black-and-white palette recalls numismatics. In The Fall (2021), a faceless man falls off his horse, frowned upon by a large coin with too many mouths. The Juggling (2021) features disproportionate seniors and children dancing, surmounted by a horse suspended in the sky, as others sleep on (more) horses perched on a hill that is half vegetal, half made of crania. The animals are all skeletal or metaphysical, and humans are naked, equally cadaverous. Who cares for whom, who subjugates whom, who is worshipped and who prays are not questions to be asked. That’s probably why Joe Bradley (*1975) responds to Pils’s parable with brightly-coloured geometric formations – only the faintest evocations of forms. They hint at humans, or robotic figures, or maybe, horses.

The Treaty of Sèvres was signed in 1920 in an exhibition room of the Parisian suburb’s famed porcelain factory. And in front of one statue did the chairmen of the World War I Allies and of the Ottoman Empire sign the document: goddess Minerva sitting enthroned. Cemile Sahin (*1990) is preoccupied with the goddess in that room; with how symbols and politics interface. According to Marxist historian Eric Hobsbawm, the Treaty, which reorganised Europe into nation-states along ethnic lines, provided a justification for the genocides that subsequently swept the continent. How is the goddess of wisdom and strategic warfare; the token of justice, law, and victory; the sponsor of arts, trade, and strategy, to be accounted for? People stopped toppling statues (for now), but Sahin is right in fixating on symbols’ central place in combat – then and now.

ISABELLA ZAMBONI is an editor at Spike. She lives in Berlin.