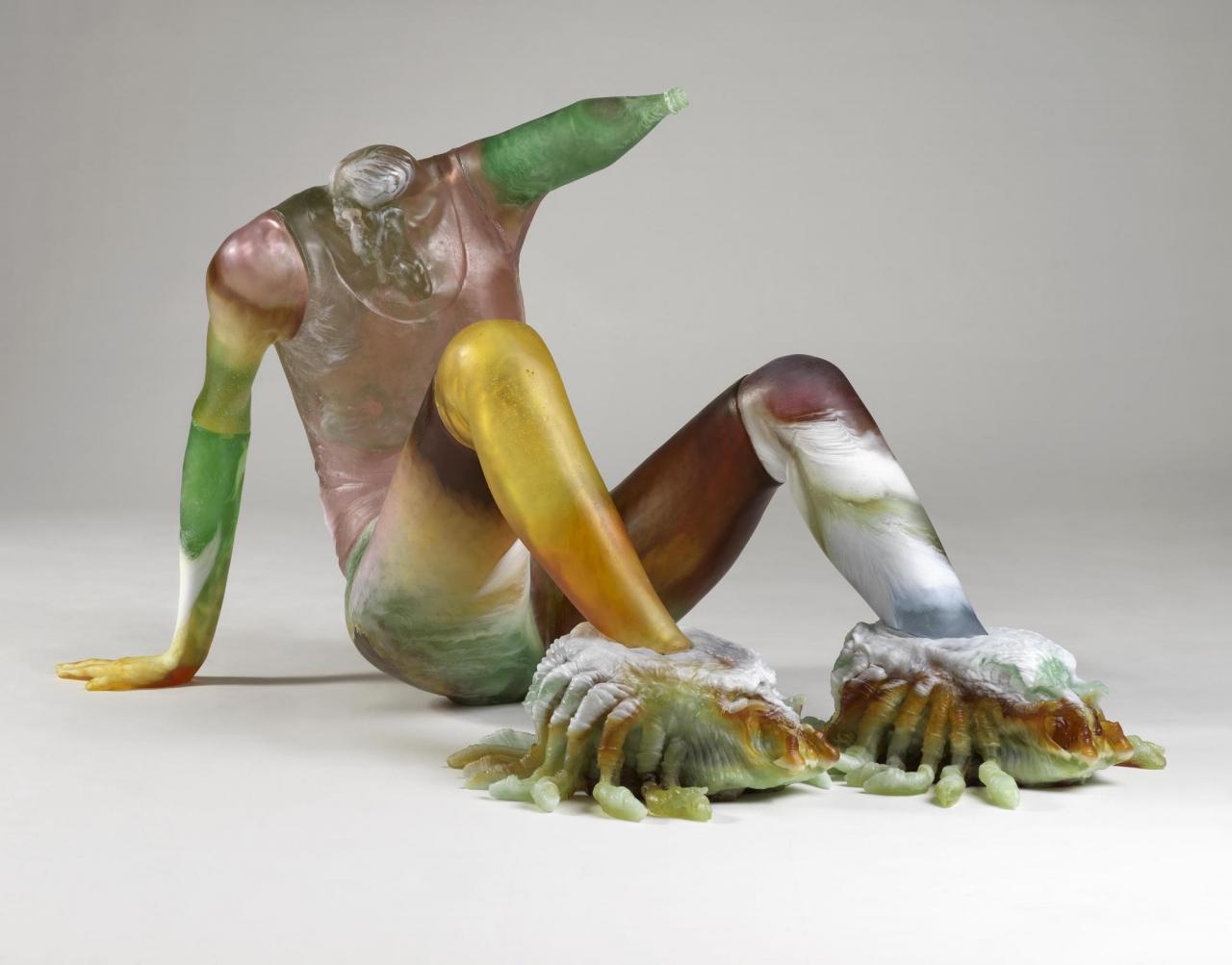 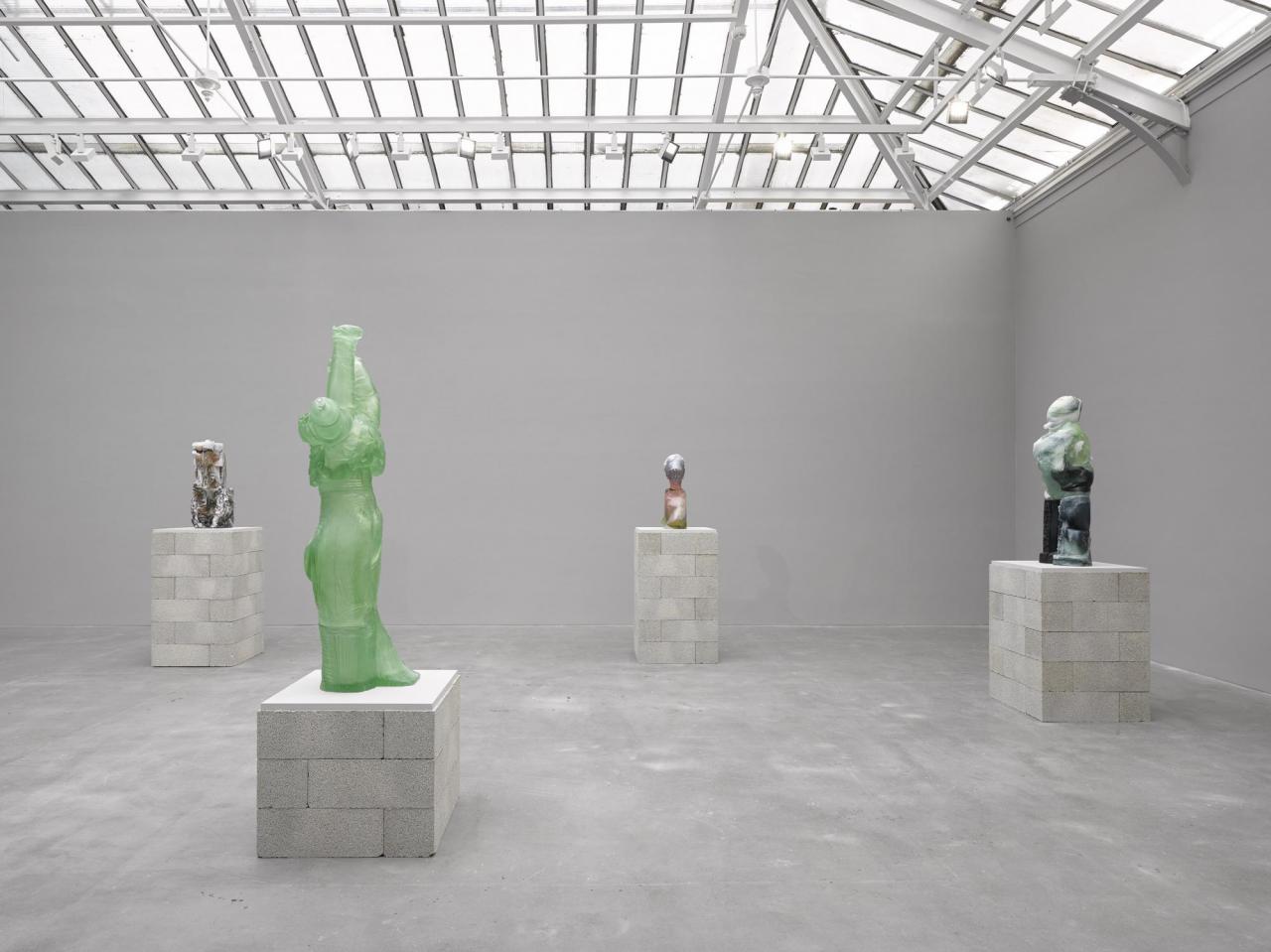 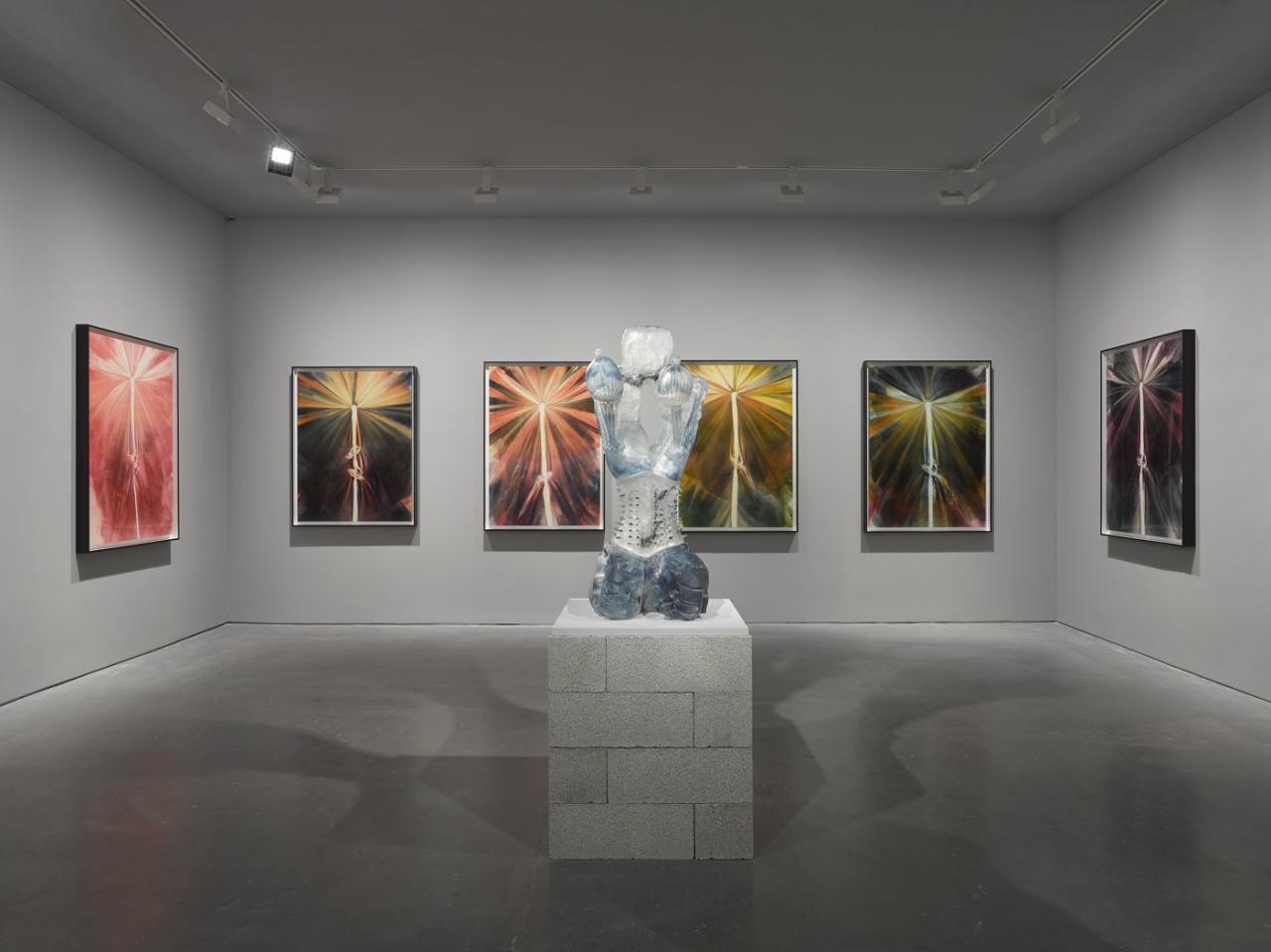 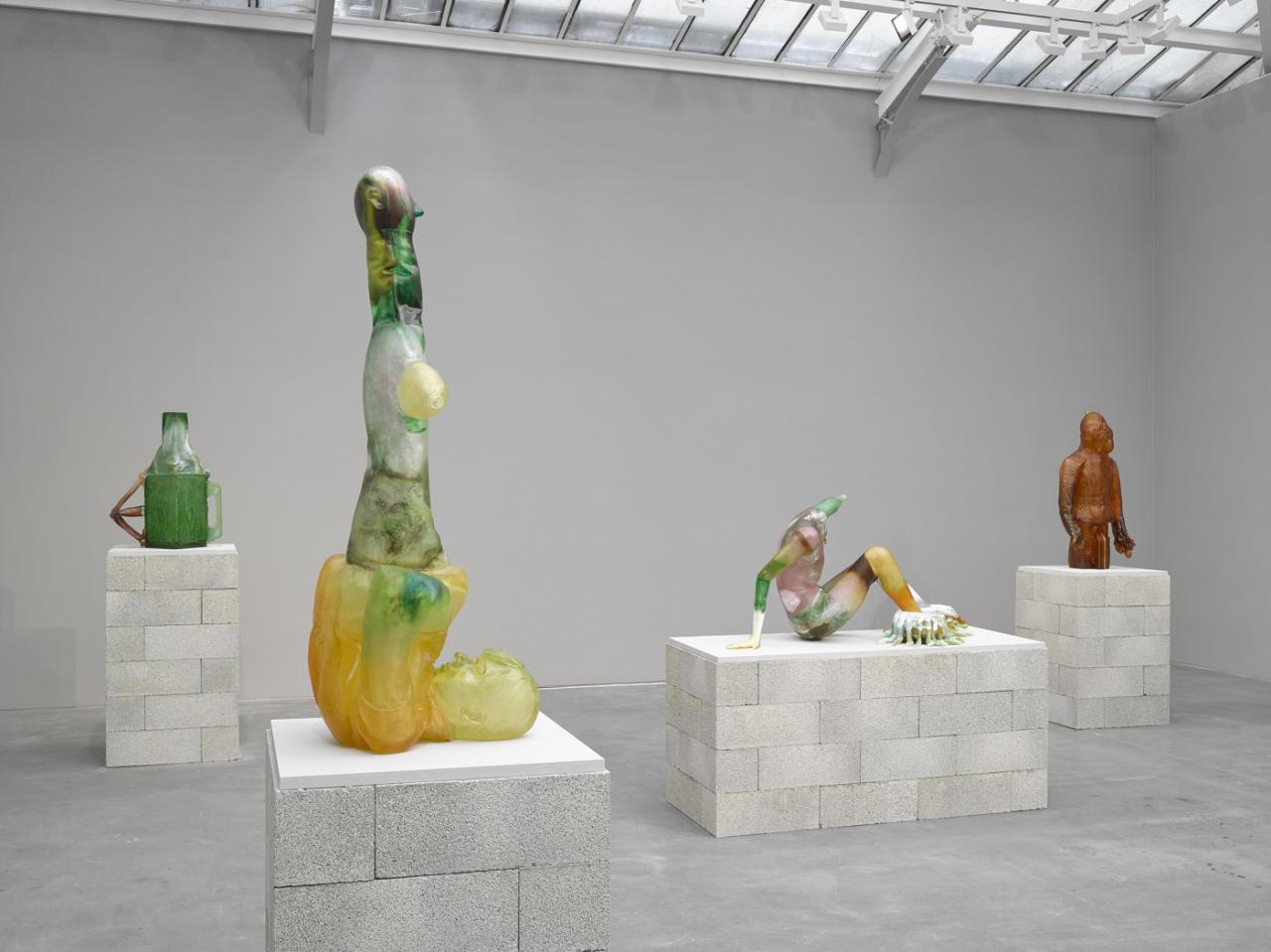 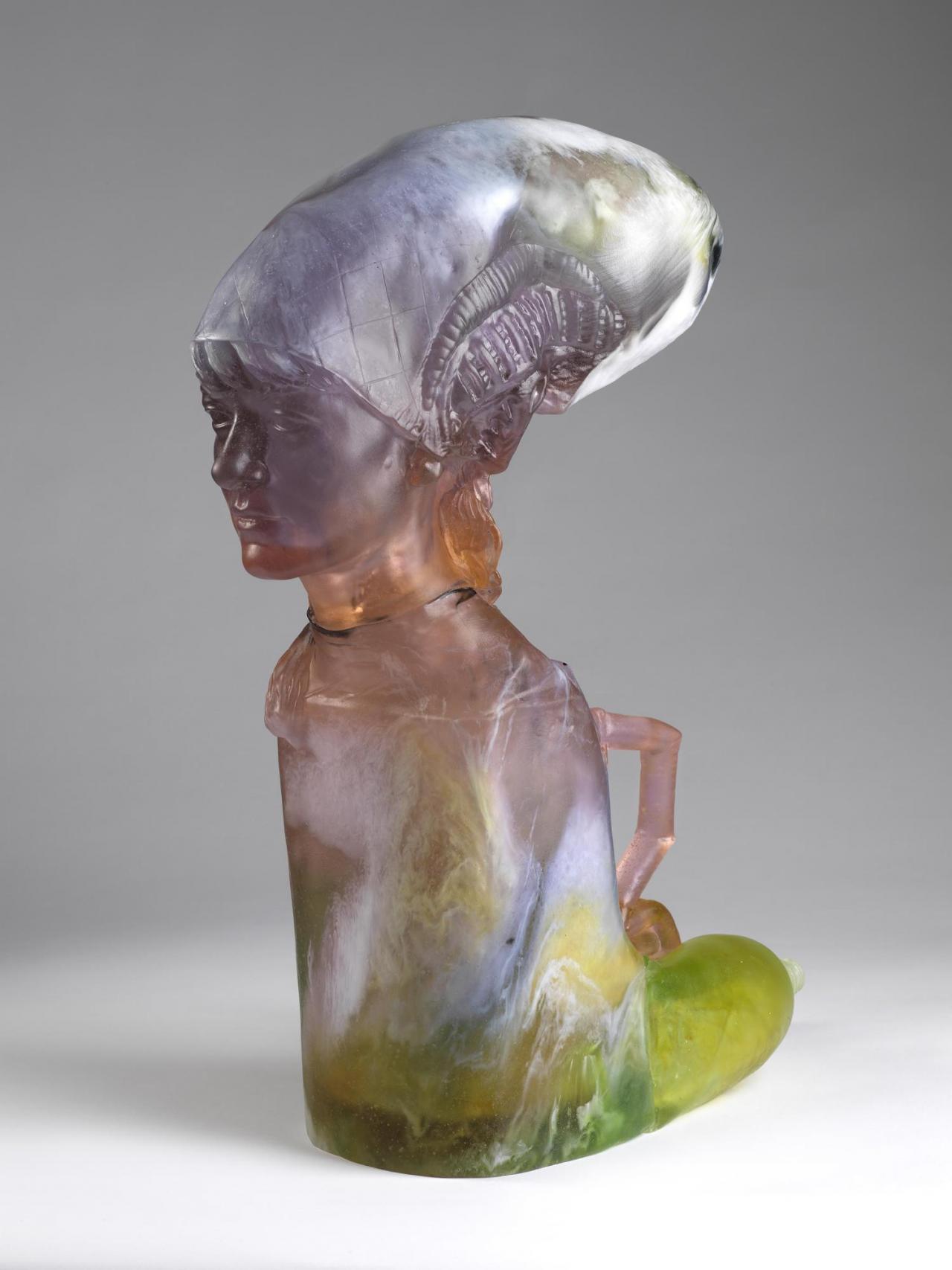 When Andra Ursuta first presented her series of translucent glass-cast sculptures at the 58th Venice Biennial in 2019, theorist Eugene Thacker, known for authoring a trilogy on the
“philosophy of horror”, had just published his newest book, Infinite Resignation. A collection of upbeat aphorisms, its subject matter – philosophical nihilism – was introduced by a joke: “I see the glass half full, but of poison.” The parallel between Thacker and the Romanian-born artist, both in substance and in tone, is a fitting one: in Ralph Rugoff’s group-exhibition, May You Live in Interesting Times, her anthropomorphic vessels were quite literally bottles, some filled with a murky liquid – in this case, alcohol.

Since the early 2010s, the New York-based sculptor has been known for her morbidly humorous and seductively hellish materialization of the darkest edges of humanity, infusing her sculptures and installations with an approach both subjective and structural: from growing up under Ceausescu’s oppressive regime to spending too many hours googling cursed keywords. There were the early casts of a woman’s flattened body – the artist’s –complete with wig, sneakers and cum-stains (Crush, 2011), or the severed greyish tongues sadistically attached to a broom stick (Floor Lickers, 2014).

Expanding upon the Venice works, which prompted David Zwirner Gallery to announce worldwide representation of the artist last July, Ursuta inaugurated her first exhibition with the gallery in early September, which is also her first solo presentation in France. Since October of 2019, David Zwirner’s space in Le Marais, occupying the Hausmanian building that was formerly home to Yvon Lambert’s now-closed gallery, has exhibited Raymond Pettibon, Jordan Wolfson, Thomas Ruff, and Francis Alÿs under its elegant glass roof.

“Void Fill”, named after the materials used to protect items during transit, is comprised of two series: in the main space, ten of the human-sized glass vessels, now multi-coloured, from the last two years; in the smaller room, thirteen new photograms on velvet, collectively titled False Hope (2021). The rubble stone pedestals of each glass work recall the series’ initial presentation in 2019. For Nobodies, Ursuta’s show at Ramiken Crucible that led to this augmented Parisian presentation, the artist took advantage of the gallery’s renovation to occupy an empty space in the same building, where the walls were left bare and the windows opened on the industrial waterfront, overlooking demolition sites and empty shipping containers.

Like a one-liner or a pun, most of Ursuta’s works rely on a forced encounter between opposed realities: sexual and machinic, organic and synthetic

Trash – taken from the streets, found around the studio, or recycled from older works – is often a starting point of Ursuta’s sculptures. For the glass pieces, the forms merge various late-capitalist debris – containers, broken and withdrawn from circulation; cheap Halloween props, probably made in China; BDSM gear, codifying a sellable sexual drive – with fragments of the artist’s own body. Scanned with a 3D-modeling program, the forms are later cut into several pieces, made into wax moulds and eventually cast in glass. The addition of colour further complicates the process and makes the final combination unpredictable, less a specific shade than a marbled surface.

Like a one-liner or a pun, most of Ursuta’s works rely on a forced encounter between opposed realities: sexual and machinic, organic and synthetic. This counter-natural alliance does not so much aim at the production of beauty, infamously described by surrealist writer Comte de Lautréamont as “the chance encounter on a dissecting-table of a sewing-machine and an umbrella”, than it does at revealing the decaying, declining and decadent underbelly of an age that will repackage anything with the suffix “dark-” just as the previous one did with the “post-”.

“Dark Enlightenment” shrouded the late 2000s in a neo-reactionary dystopian cloud; “Dark Ecology” reframed in the mid-2010s as a more resilient (but no less melancholic) coexistence. Attuned to pop-nihilism, Ursuta’s earlier works expressed a more complex palette of affects. Her humour, albeit often genitalia-themed, made it closer in tone to a Nietzschean “Dionysian pessimism” – reaffirming creation, memory and sex as a vital drive maintained precisely because the world was devoid of transcendental promises. Relinquishing a future (be it that of utopia, progress or afterlife), it was nevertheless infused with the manic energy of medieval superstitions.

Here, the symbolic order is also in peril of cracking: we are told that these sculptures are hollow. But in their pristine Parisian setting, they are more likely perceived as part of a historical tradition of reinventing the human(oid) shape than engaging with an external global economy circulating goods, desires and materials. Pleasurable darkness is derived from pre-existing representations (the bust of Nefertiti, Roman marbles) or Western entertainment franchises (the movies Alien or Predator) and, combined with fetish gear and transport containers, inscribe auto-portraiture into the realm of cultural symbols. In the velvet print series, a skeleton hand holding a torch similarly uses a Halloween prop as a readymade memento mori.

When “Void Fill” opened on September 4th, Kanye West – rumours had it that he would be attending the gallery dinner – had just dropped his tenth album, Donda, its messianic end-of-the-world aesthetics totalizing fashion’s current appetite for first-degree spikey, rubbery and Vantablack BDSM-wear (as displayed in the recent Bottega Veneta, Balenciaga and Givenchy collections). A few days later, a photo of Kim Kardashian dressed in a full-body Balenciaga leather suffocation suit would make rounds on the Internet. Deadly serious in their bombastic appropriation of rehashed subcultural codes, none of those, however, induce any real angst – they gesture towards panic-buying at the most. Existential dread needs a jarring tone, as fear only arises of the unknown, which even death no longer is.

Ursuta’s pristine shells, iridescent as they may be, now lack something of the discomforting ambiguity from her previous works. In their current reception at Zwirner, the grandiloquent context of a mega-gallery comes into play, and so does the timely aesthetic du jour as it catches up with the artist’s deeper positioning – she explains that she had the idea for the works back in 2013 or ’14, but lacked the technical means to produce them. As a finished entity, they stand still. They are earnest, perfectly executed, minutely cross-referenced – glorious, yet lacking some of the earlier series’ messy viscerality.

In a way, “Void Fill” is a counterpart to times standing still, stifling even the grim laughter of the most Nietzschean-nihilist mind. It does, from inside the art context, what bigger cultural industries do best: it mirrors the ultra-present zeitgeist, condenses it within visual forms, encapsulates it in sealed containers. It does not, however, dissociate itself from what is already there – the glass is hollow, but its gnawing poison is absent.