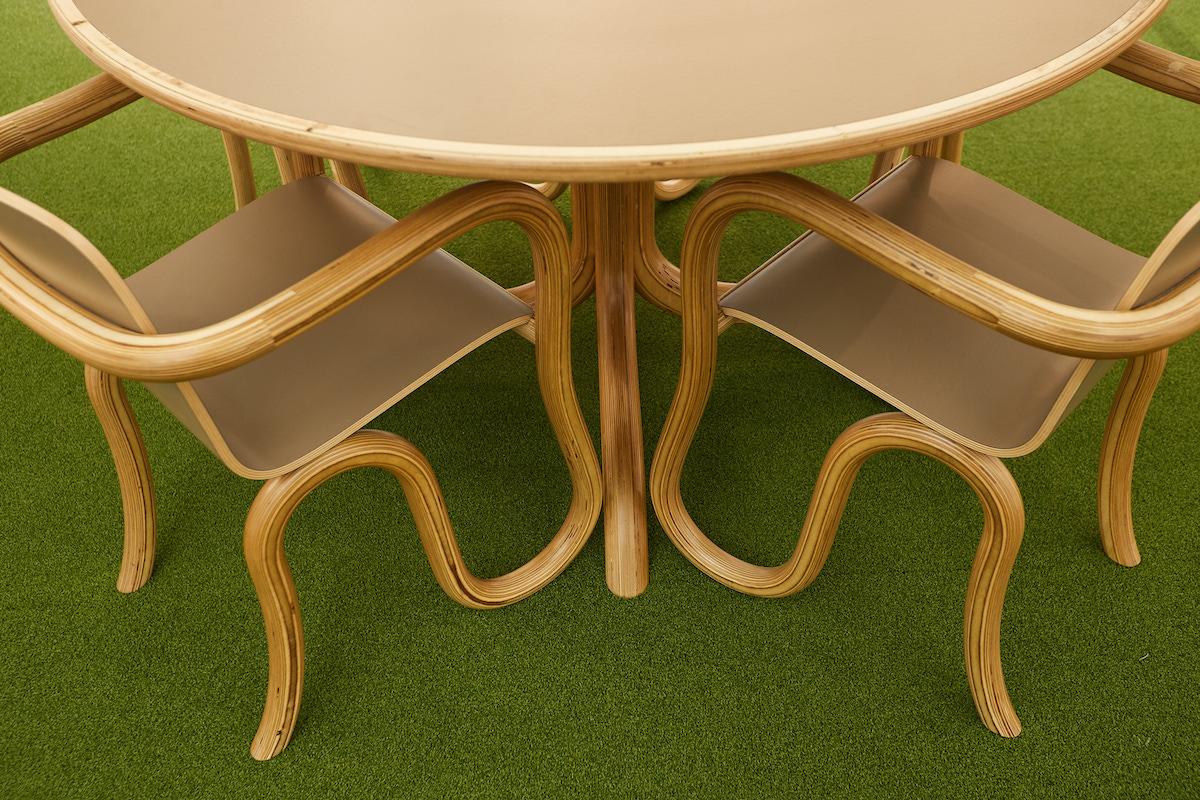 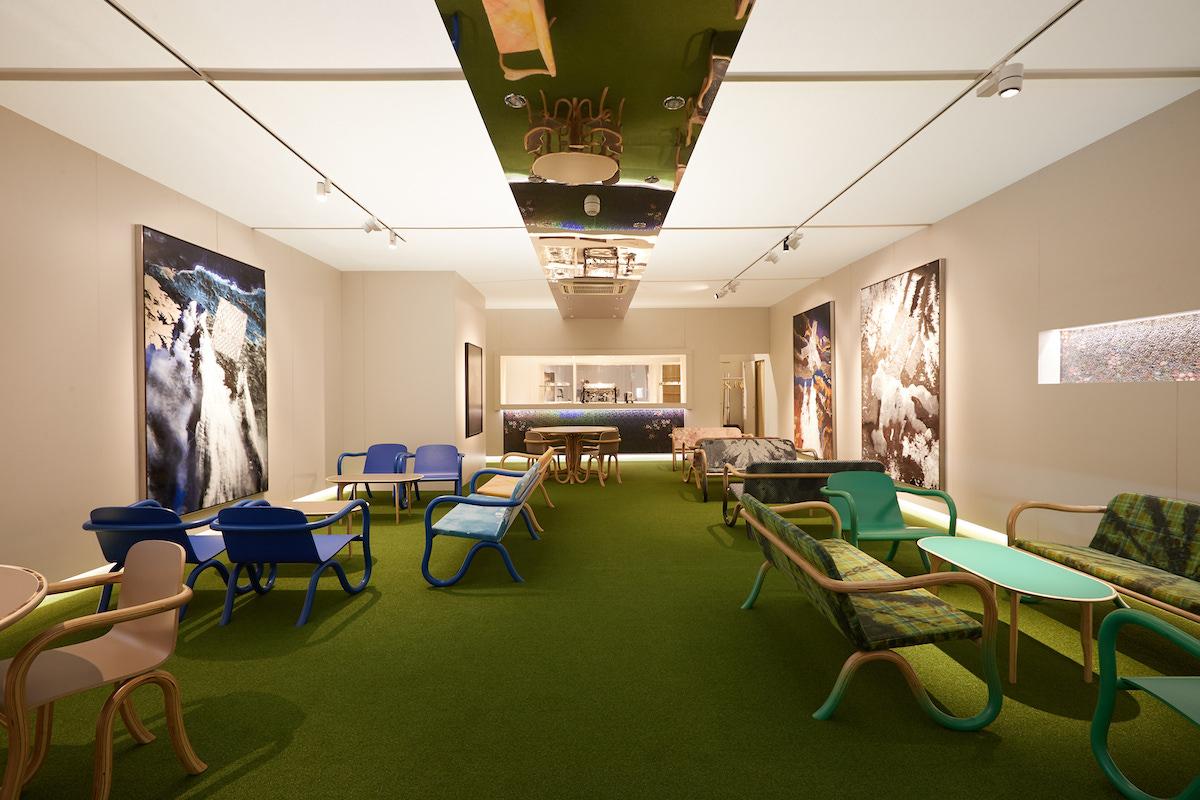 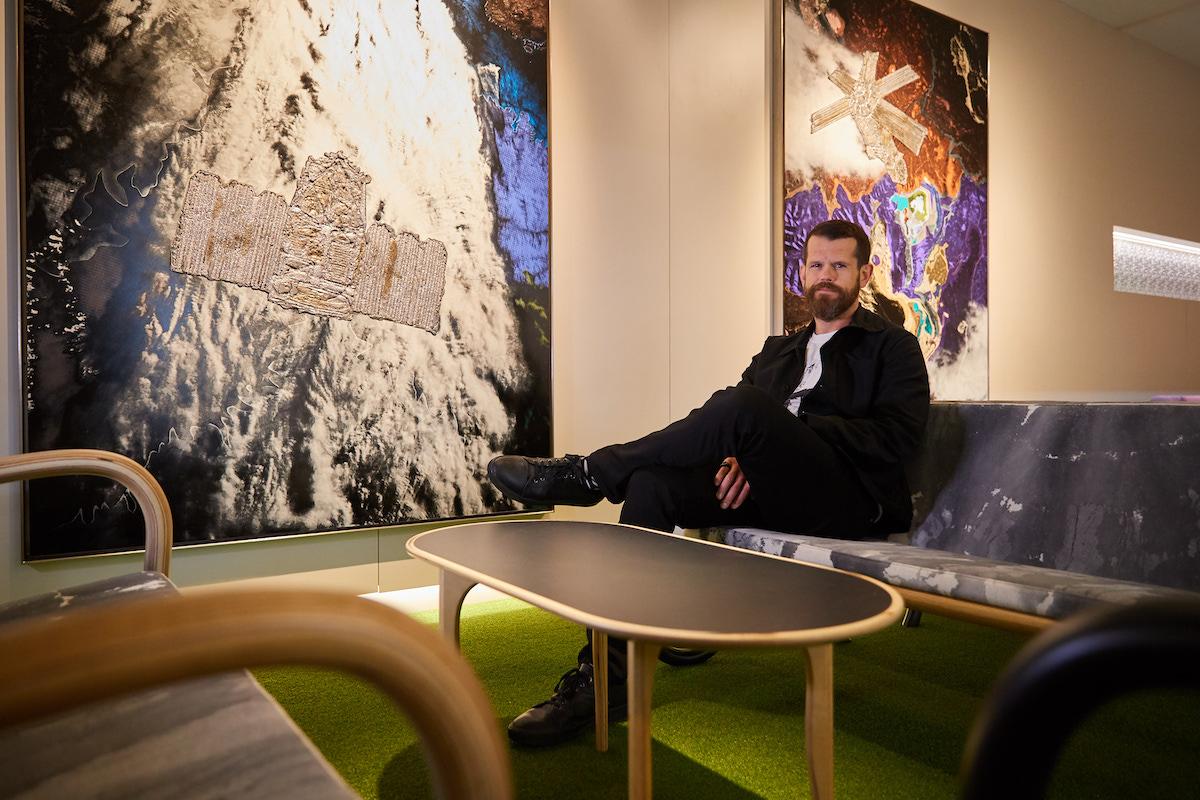 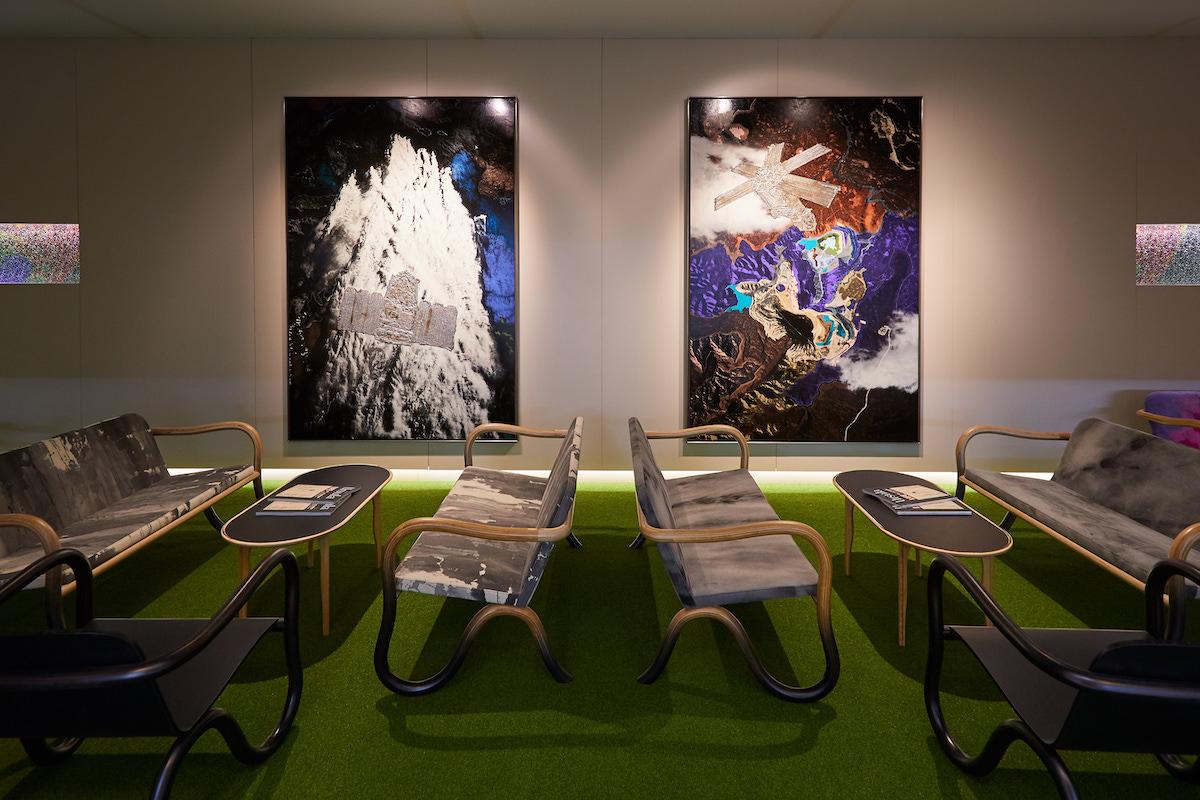 NetJets, the private aviation company that offers “fractional ownership” of private business jets (you could call it shared economy), invited Brooklyn-based artist Matthew Day Jackson to design their lounge for this year’s Art Basel. The artist, who is represented by Hauser & Wirth, accepted not by lazily putting a few of his works on the wall, but by producing the entire lounge’s furniture in cooperation with Finnish design house Made by Choice. Together they created an, one might dare to say, immersive moon-themed feel-good-oasis, and a seemingly perfect setting to briefly reconsider our relationship to the moon and attune to the 50th anniversary of Apollo 11.

We’re sitting around a table in this space-themed VIP-lounge this morning, whose surface, a PR person has just told us, is shaped according to the surface of the moon.

Yes, at 80 micrometres scaled to 45.000 feet – which is the highest point on the moon measured from the lowest point, of course, since there is no sea level – these tables and all of the furniture, were realised with Made by Choice and will go into production.

I like the idea that five years from now somebody who has this table is making dinner for friends, but one of those friends spills a glass of wine on the kitchen table, and when they go clean it up they’ll find themselves asking: “What is this surface?”. And the owner, who was totally in love with it five years ago but has forgotten why, says: “Oh yeah, there was this artist who made this, it’s the Moon!”

Whose idea was this entire lounge?

I was approached by NetJets through Hauser & Wirth because they knew that I was making furniture. And it all happened very quickly. The time from the first approach until now was only about three months.

How does NetJets fit in with your work, these ones here or in general?

They offered the space to bring two concepts together, furniture and painting. But I wouldn’t say there is a thematic connection. They fly airplanes and I’m interested in people who fly airplanes that go way faster and way higher.

Where does this interest come from?

I think Israel’s recent attempt to land on the Moon expresses our relationship to it. We’re not interested in the Moon, we’re interested in things that we can hold and keep and name and land spacecrafts on. Ever since there were eyes on Earth they looked up into the night sky and saw this floating light. It is built into our human story and almost every religion acknowledges it and the mystery of that thing isn’t lost. To a certain degree, once we’ve traveled to the Moon and have bridged the gap, it feels very close and familiar – whereas, I think it is fundamentally unknowable.

And what about the paintings with the satellites?

They’re all satellites used for surveillance of human beings on Earth. Which is something that is abstract for most of us, unless you’re a scientist, and that’s why the paintings are rather abstract. My interest is not in the technology, I’m interested in Voyager beeping its way out of the solar system and Israel crashing a spacecraft into the surface of the moon, and what that does to us: how do we see ourselves?

As soon as we landed on the moon, the most important picture that really filtered through our collective consciousness was the Earthrise (1968). As soon as we went out there, we were immediately looking back. I was trying to find photographs by astronauts with a hand-held camera of stars in outer space. But there really aren’t any, they’re all looking down on earth to see if they can recognize where they’ve been and so on. There is a solipsistic gaze back on Earth, which is a beautiful part of our humanity – but it’s also very narrow, like when someone looks outside, and decides he doesn’t believe in climate change because the weather today is ok. But the weather is in human time, and climate is on a different time scale.

So what can we take from our relation to the moon?

Our obsession with it is a story about blood and guts. The fact that we could land a relatively heavy object going really fast within lunar orbit proofed a lot of things that were immediately utilized back here on Earth, for example. Those tools that we developed through that mission are now buried in the ground in South Dakota, North Dakota, Wyoming. Right now, as we speak, there are two people, missileers, sitting underground in a launch facility with their fingertips on a missile aimed at every single city we’ve ever traveled to in our entire lives, ready to go in two minutes. They’re seated far enough from each other, so they can’t touch, and if one of them tries, they both have a 45. calibre gun. They only work together, there are no other people there, one has one code, one has another set of codes, two phones…and they probably talk about the new pizza place that opened in Rapid City (South Dakota). It’s terrifying.