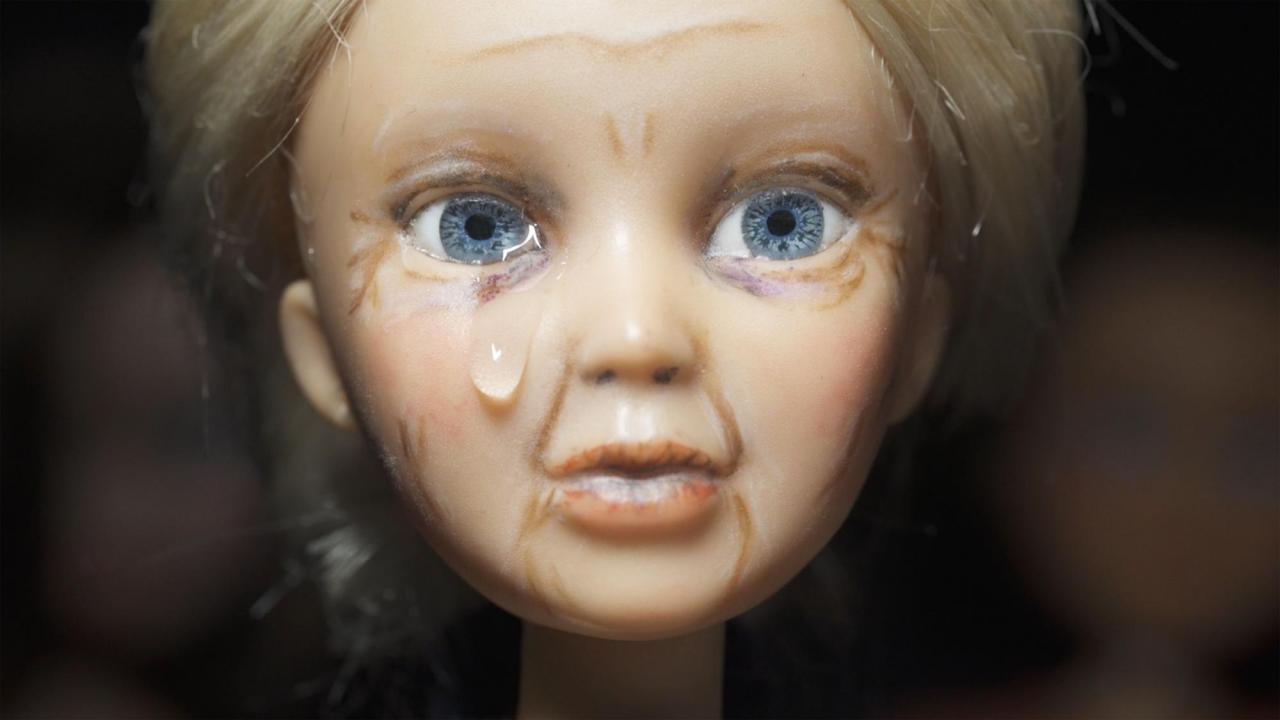 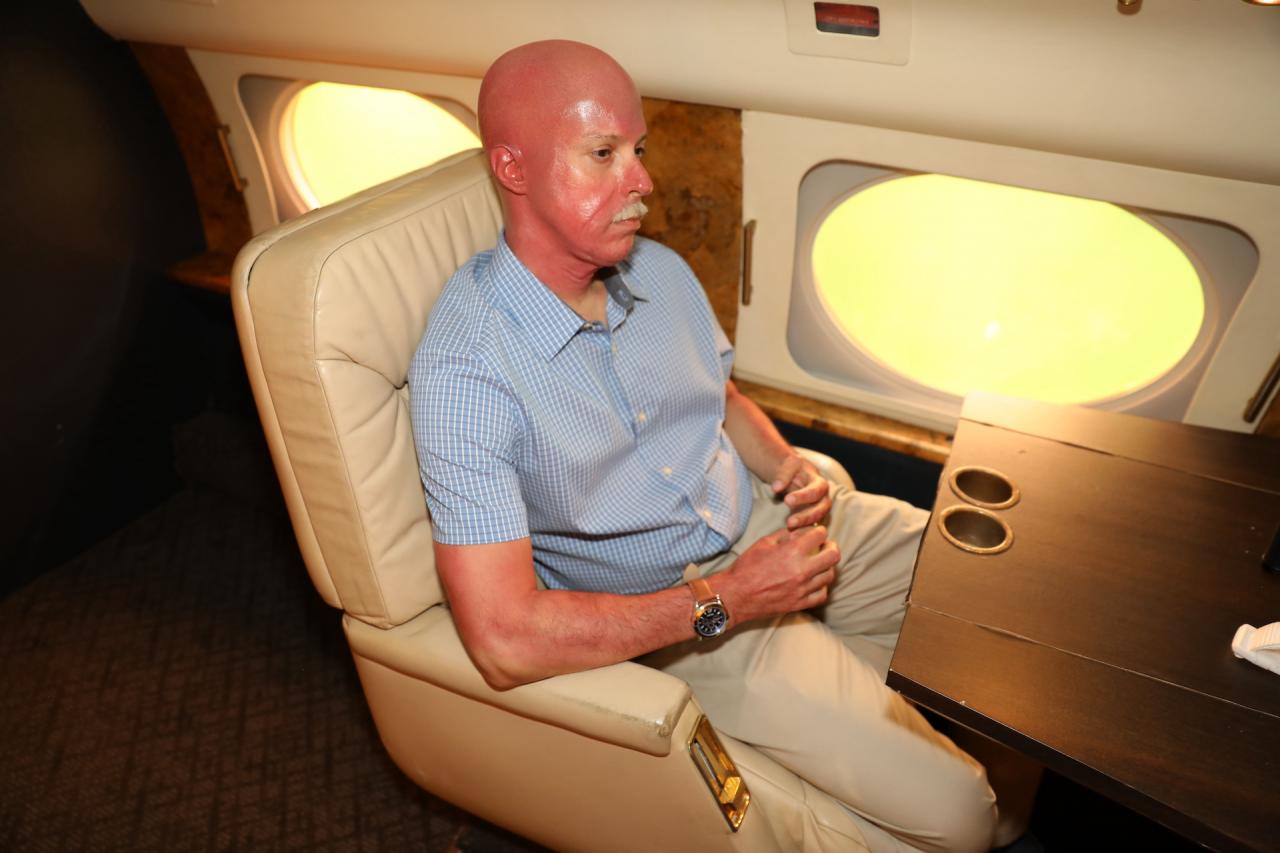 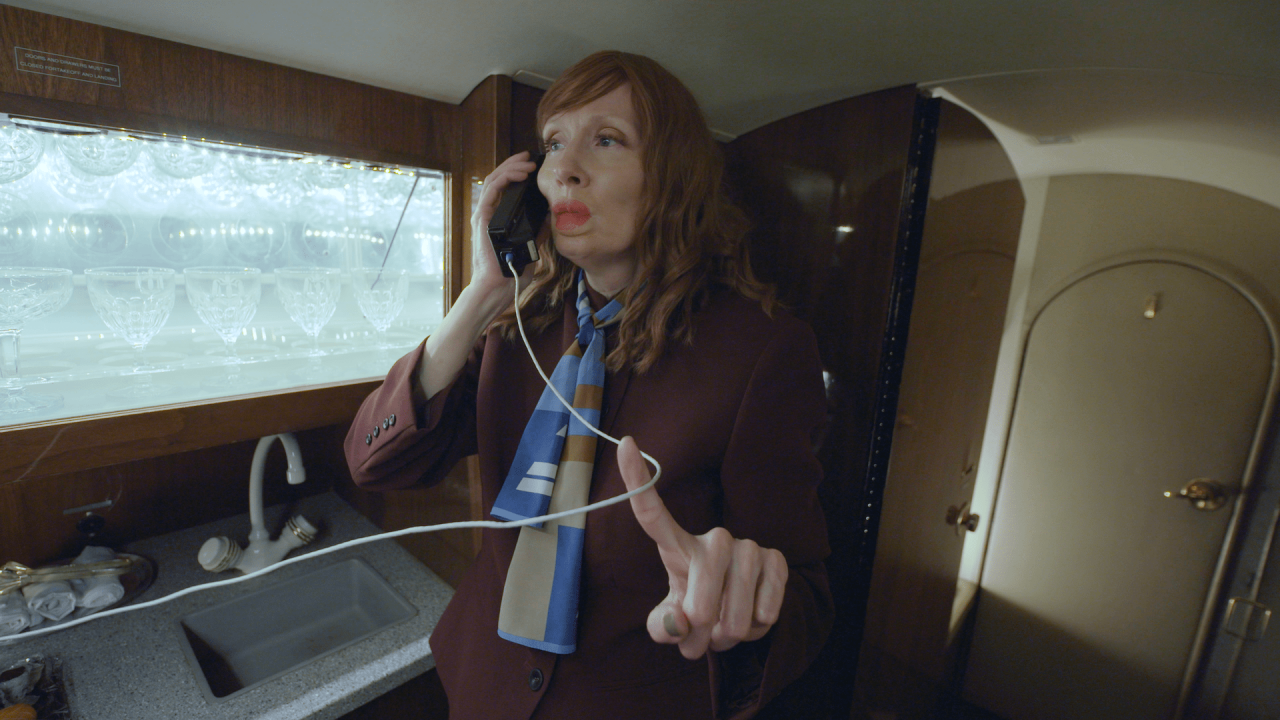 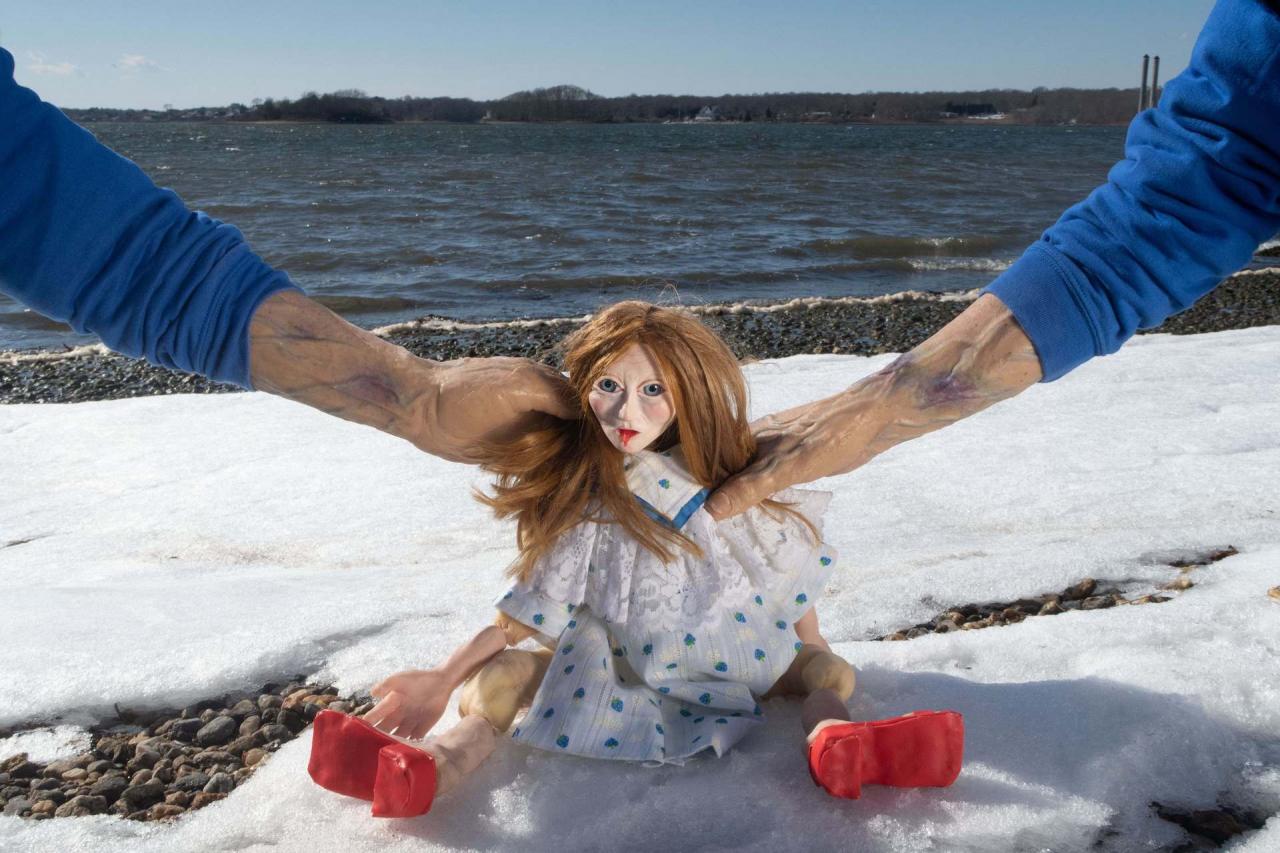 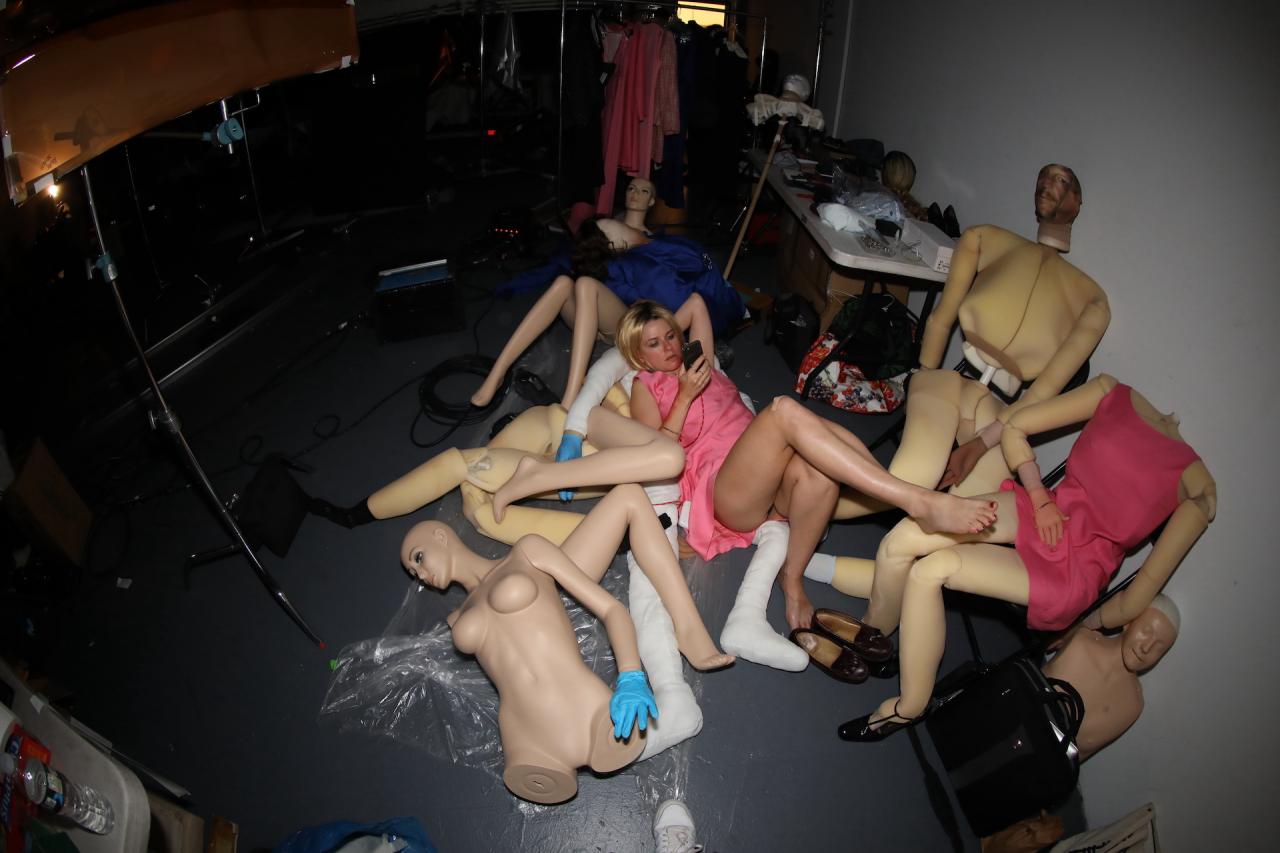 Jacques Derrida once wrote that there is no form of testimony that does not at least structurally imply in itself the possibility of fiction, simulacra, lie, and perjury – that is to say, the possibility of literature. In the grotesque and deeply humorous video works of Brooklyn-based artist Jordan Strafer, authoritative accounts of the artist’s own lived (and often traumatic) experiences are unsettled and perverted only to allow for more difficult emotional truths to rise to the surface, played out via haunted and heartbreaking scenarios, creepy prosthetic make-up, and a seemingly endless assortment of dolls. In a time when the narrating “I” has reached a new kind of sovereignty in aesthetic representation, Strafer entertains the opposite, its total sabotaging – most recently with her film PEAK HEAVEN LOVE FOREVER (2022), a true story of kinship and betrayal aboard a transatlantic air ambulance from London to Miami, currently showing as part of her first institutional solo exhibition at PARTICIPANT INC in New York.

Jeppe Ugelvig: “Put two fingers in your mouth and tell me a terrible story”, a one-liner from the text alongside “PUNCHLINE”, is an apt description for what your films feel like: strange, terrible stories; the terrible as a narrative mode. Can I ask, why are your stories so terrible?

Jordan Strafer: I think there’s a humour to this mode that comes from over-identifying with the terrible. Most of the stories I tell are somehow based in autobiography, or the idea of truth or memory of what happened, or a feeling based on something from my life. I feel that if it’s about me, as a subject, I have the obligation to implicate myself and to make myself bad, in a way. It also functions as a way to distance myself from the story and create room for someone to enter. The work is really sincere, but I need to find ways to make it not so sincere that it can’t be entered. I want people to feel something – and maybe feel bad.

JU: Do you have nightmares or vivid dreams? Where do you develop your narrative structure from?

JS: One element of my writing practice is recording voice memos of my dreams almost every morning. Most of the writing is based on these recordings with appropriated and transcribed text, so yes, a lot of it literally comes from nightmares. Even that “PUNCHLINE” text, two fingers in your mouth and tell me a terrible story, came directly from one of those memos.

JU: Being myself an active parasomniac – sleepwalking, night terrors, hallucinations and the like – I recognise a very particular atmosphere in your work. More technically, it employs strategies such as being trapped, repetition, gore, murderous parents, protagonists replicated.. In the newest film, the characters are on an airplane where nothing can possibly happen because they’re stuck in a vacuum – but here, the film gives space to that dream-like feeling by being caught in a loop, changing only so slightly every time. What is your relationship to psychoanalysis, or that line of aesthetics in art and cinema?

JS: Although I don’t feel equipped at all as a scholar of psychoanalytic theory, I do find it useful as someone who makes images to recognise that everything is symbolic. In Lacan’s writing, for example, the breast might not be literally the mother’s breast, but a symbol. When I started making time-based work in undergrad I was drawn to thinkers like D.W. Winnicott and Melanie Klein due to their analysis of symbols that are centred around the nuclear family; we can basically talk about everything through it.

JU: What has your ascent to narrative filmmaking been like?

JS: Towards the end of my undergraduate studies, I started making very simple performance videos that would involve me as an alter ego, often with just a camera on a tripod or a friend holding it, doing some action like getting my belly button pierced or answering the phone; very simple gestures, very little editing. When I went to Bard College, I was in the film and video department, where I realised, “I’m out of my league!” Most of these people know so much about filmmaking, and I felt like an imposter there, not knowing the first thing about the structures of the medium. I came to it from the lineage of video art, which I still identify with much more than traditional film. But I wanted to – needed to – start teaching myself, so while I was at school, I started choosing scenes from movies and re-making them piece by piece. One of these was a pre-credit scene from Tarkovsky’s The Mirror (1975), which I slowly re-performed and made into a three-channel video with my dad and a baby doll; the scene was really simple, a hypnotist “curing” a stuttering teenager. That was the first time I took a pre-existing script and Mad-Libbed it so that it fit into my life. From there, I did my rendition of a David Lynch short The Amputee (1974), a scene from Wim Wenders’ Paris Texas (1984), and one from Ingmar Bergman’s Persona (1966); they were good exercises simply in terms of learning how to edit, how to ask people how to move in front of a camera, how to put things together, how to incorporate sound; practicing what pacing feels like, what cutting on the action even is. I just did it from copying.

JU: Indeed, there is something very brash, an almost child-like narrative force in your work: spinning stories for the sake of the story. It reminded me of the Danish author Isaac Dinesen, who once said that she took the mirror of reality, shattered it, picked up the best pieces, and put it back together. Taking this freedom to advance a narrative often happens at the expense of faithful autobiography.

JS: But it might also be the most effective way to portray a truth. There are so many things that could be “the truth” of a story, including simply the subjective feeling that came from it. I think about the difference between autobiography and memoir, and how that relates to the notion of fiction. I love anything that’s “based on a true story”. I remember, ages ago, watching an Oprah episode about someone who wrote a book about their drug addiction, but it had become apparent that the book was riddled with falsehoods, that the person had fictionalised their life. Memoir as a form, more so than autobiography, implies something deeply subjective, where the truth is not necessarily factual. I’m interested in that. Why would I choose the form of art if it had to be strictly factual? I would have done something else!

Documenting truth without artifice is essentially, arguably, a form of violence. Holding a camera in front of someone and asking them to give truthful testimony – it’s pointing and shooting.

Weirdly, one way to tell a story that feels less violent to the subject is to add artifice. So while I’m making the work, I separate myself internally, and do not actively think of it as something that came from my story. I do when I’m planning it, but while making it, it’s no longer mine – it’s abstracted out into the story; it’s the piece. But my recent work – other than the murder, suicide, plane crash and twincest fantasy – is all based on actual memories. I was on an actual air ambulance with my dad and his husband and a flight attendant and two paramedics, and we were actually served sushi, oddly. It feels good that I’m able to turn memories and painful things into material, but I don’t want to make it about me, and I work very hard so that it’s not. My hope for it is that it’s a contribution of some kind, that it gives someone something to feel or think about. That’s the actual relief for me; it’s giving a memory a purpose.

JU: In your film SOS, you have this prosthetic hand that literally comes down from the sky to turn on the sound of an ambulance, or to adjust the posture of the protagonist doll when she’s lying on the beach. You make the force of your directorial intervention really clear; it really is like playing with reality, like you’re playing with dolls. Why have you stuck with dolls?

JS: One of the most rewarding aspects of filmmaking is the collaboration, but it can also be one of the most frustrating things, to always need more people. One of the instincts with the dolls is just, less people. But also tying it back to psychoanalysis, the doll becomes a representation of no one specific. That’s also why I love make-up, prosthetics, masking, and the obscuring of a figure. Because the stories are so specific, I want the figures to be somehow more universal, or at least potentially symbolic.

JU: I guess these dolls are relieved of having a particular identity – they’re just props in a play, and this feels refreshing.

JS: And that means a lot to me, because by relieving them of their identity they can be more terrible, and if anyone is implicated in that, it would hopefully just be me. The dolls can become a projection surface, as they often are in society: dolls are used by law enforcement for children to express instances of sexual abuse, for example. And as a form of playing too; I remember playing with dolls as a kid and just cutting all their hair off, now these are two barbies are married! I throw them in the pool, that’s their honeymoon! Dolls lend themselves to both truth-telling and imagination.

JU: Is truth important to you?

JS: I may be cynical. I am fond of the topics of truth, love, justice, and freedom, because I think they’re ideals, but I don't think they actually exist. I think the only certain thing is death. I don’t think that there is such a thing as truth. I want to engage with it anyway. But often, an emotional truth, conveying a feeling, is one of the only ways to touch on truth, truly.

JORDAN STRAFER is a Brooklyn-based video artist. Her solo exhibition “PUNCHLINE” at PARTICIPANT INC in New York is on view until 20 February 2022.

JEPPE UGELVIG is a critic, curator, and contributing editor to Spike.