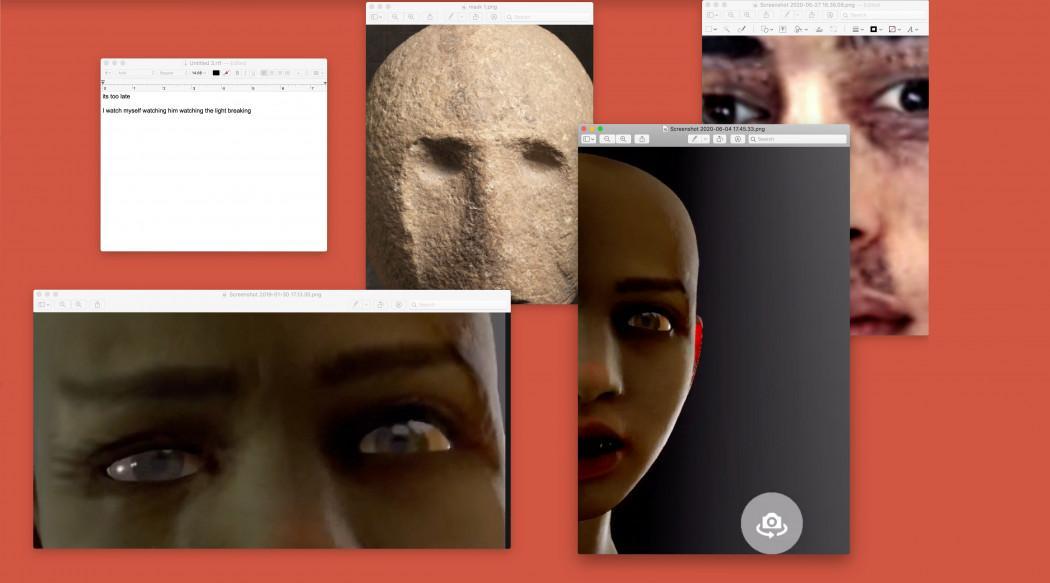 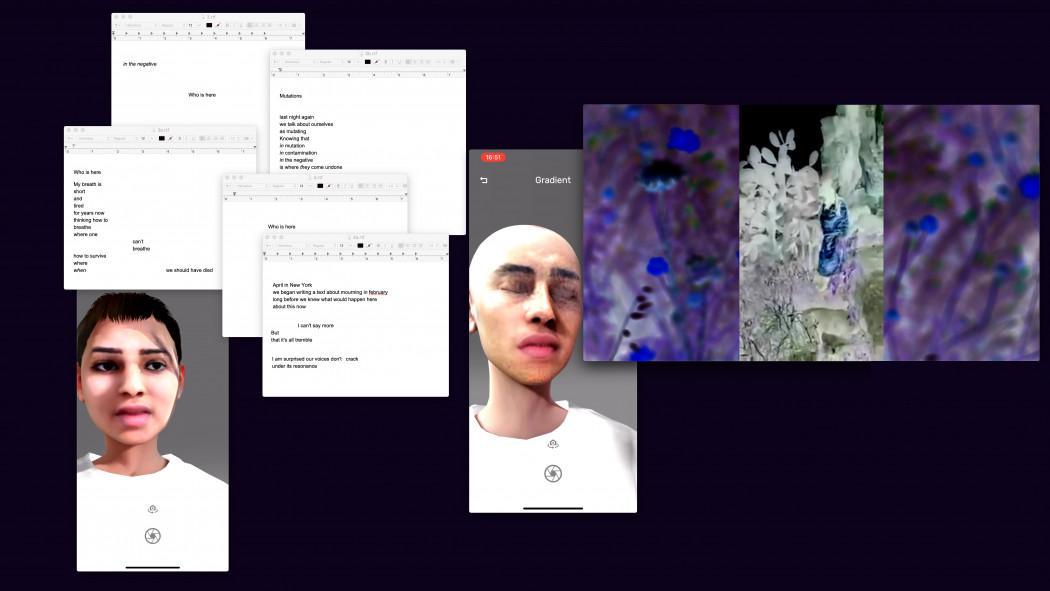 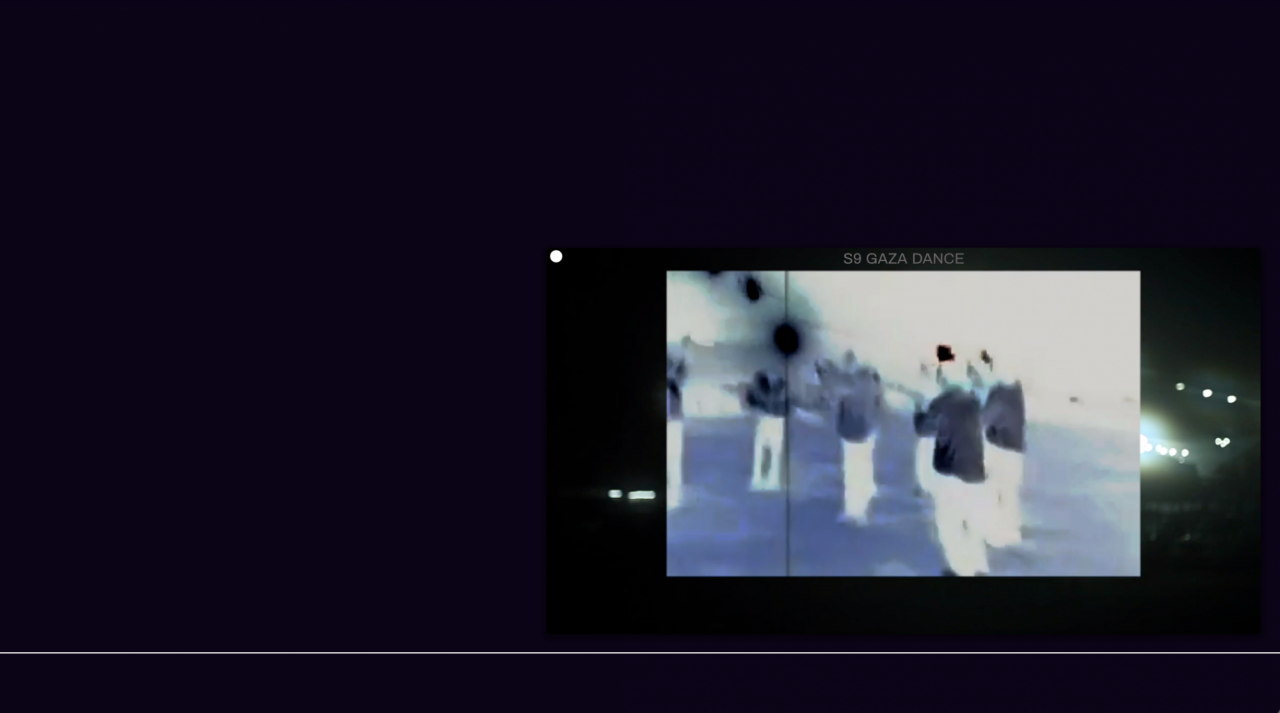 Two videos; one superimposed on the other. In one, eight men are dancing in a circle not unlike the figures in Matisse’s Dance, save for maybe more items of clothing. They jump and move in slow motion, washed in oversaturated colour negatives, clapping as one leads from the centre. Old film grain and overlay, including the occasional perforation, obscure the image from any clear distinguishing features. Framing them from behind is a video of a streetscape at night, with cars and streetlights glowing, piercing their bodies in quick flashes. There is silence. Both videos sit in the lower right-hand corner of the screen on a purple webpage, moving in perpetuity like an under-construction GIF from the early aughts. I hover my cursor over the video to reveal a file name: S9 GAZA DANCE. I click on the red circle to the upper left of the file and exit the window.

The video follows the familiar language of macOS graphical operating systems, like a file that one has just pulled up from their desktop with a double click. With soft edges and translucent colours, this interface forms the visual infrastructure for New York and Ramallah-based artists Basel Abbas and Ruanne Abou-Rahme’s ongoing three-part web project for the Dia Art Foundation, May amnesia never kiss us on the mouth (2020–), a title the artists lifted from a translation of Chilean writer Roberto Bolaño’s 1976 “Infrarealist Manifesto”.

In some ways, GAZA DANCE is the postscript to a postscript, namely the first part of Abbas and Abou-Rauhme’s project, Postscript: after everything is extracted. The rest of the almost 20-minute multimedia project is an exploration in ethno-poetics, following a text written by the artists in February 2020 in which they reflect on the grief and mourning of displacement. In March 2020, when New York State responded to the Covid pandemic with a lockdown, the two artists became stranded in Brooklyn and unable to return to their homes in Palestine. Facing a city in crisis and doubly severed from geographic belonging, they turned, like many of us, to the web.

Abbas and Abou-Rauhme weave together a collage of text in both English and Arabic, still images, video, and sound across six linear scenes which, besides simply pausing and muting, one can manipulate in order and duration (I could close nearly every file window that popped up if I wanted to, leaving just the purple backdrop to stare at). The artists layer electronic beats and synths over distant singing, punctuated by videos of the Jericho hills and close-ups of vegetation in eerily inverted colours. Shuffling and overlapping these moments, connections begin to emerge. It is a desktop-as-site-specific installation, yet at an institutional remove. Digitally-generated avatars, rendered with a software that fills in missing data with visual distortions and facial glitches, make their appearance along the periphery, somewhat like a livestream.

These points of reference have recurred throughout the artists’ work and remain touchstones in understanding the porous and disorienting nature of settler colonialism in Palestine, shot through with the affective implications of violence, loss, and forced migration. As a narrative, May amnesia never kiss us on the mouth follows an associative path, emerging from repetitive images and tangential references, like picking up pieces and trying to fit them together. The act of displacement underscores this need to reintegrate broken parts, such as the landscape (“The earth dug up”), into the self, while the excavated Neolithic mask that appears at the project’s outset suggests a through-line of historical continuity even despite disruptions. In one video, they invert the colours of the wild tumble thistle, or ‘akkoub (gundelia), a plant that has been foraged for centuries but is now protected by the Israeli Nature and Parks Authority (INPA), launching us further into “the negative” – explored simultaneously in a plain-text poem in a popup window – displaced from the very earth that feeds us. As the two write,

“Once we said
we are in search of a new language
now we hold on
to any form of language we can find
to hold these broken parts together
These half breaths
These I don’t know if we are living or dying.”

They play with the concept of linear time, while also attempting to break out of colonial – as opposed to “living” – experiences of temporality. In the aftermath of widespread crisis, Abbas and Abou-Rahme ask: if colonialist structures deny the self, how might we build it back?

When the Arab Spring erupted during the early 2010s, a burgeoning political aesthetic emerged on social media. Abbas and Abou-Rahme took note, collecting online recordings of everyday people in Palestine, Iraq and Syria. These recordings were originally posted to the internet (though many are no longer accessible online), and demonstrate the ways in which people mitigate their experiences of conflict through ritual and performance. In the second part of the artists’ project, these recordings are displayed as an archive, along with lyrical songs and dances, speeches and protests, all of which speak out against the political erasure of a people caught between revolution and the consolidation of power.

Part of what helps May amnesia never kiss us on the mouth work – although it marks a departure from the duo’s previous projects – is how the artists situate the web interface as a kind of digital archive. Though the extent of social media’s influence on the Arab Spring is a hotly contested subject of debate, it is clear that where online speech met repression, so did the free access to knowledge and information – in turn, underscoring the need for alternative methods of archiving acts of resistance, which would otherwise be censored or erased. Contrary to the old adage, the internet is not forever. Neither is revolution, for that matter. There is a tendency to view many of the revolutions of the Arab Spring as failures. May amnesia never kiss us on the mouth shows us an alternative framing, proposing a more ephemeral and ongoing process towards liberation. It’s in the gaps and fringes, in poor images and ad-hoc archives, spaces of resistance that cannot be swept away in the digital deluge or spoken away by counterinsurgents.