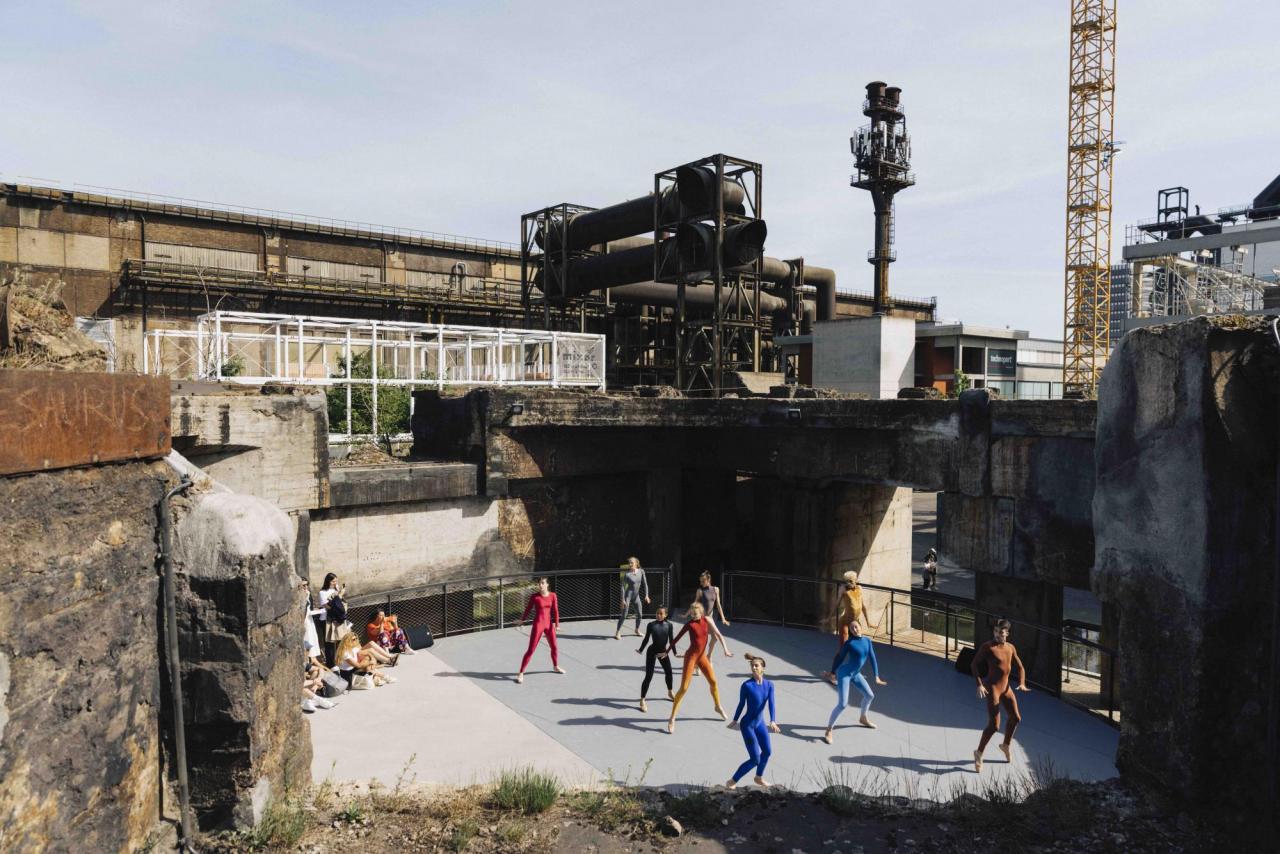 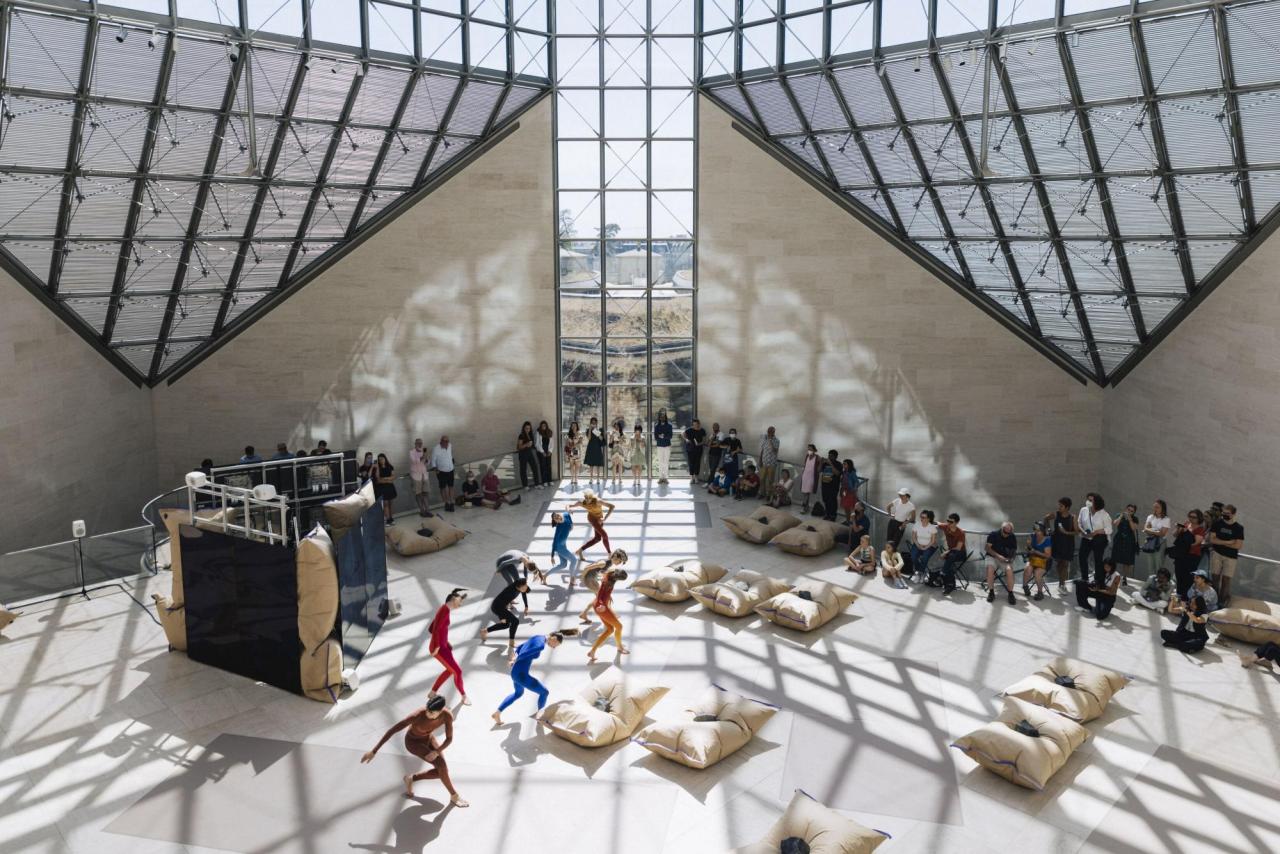 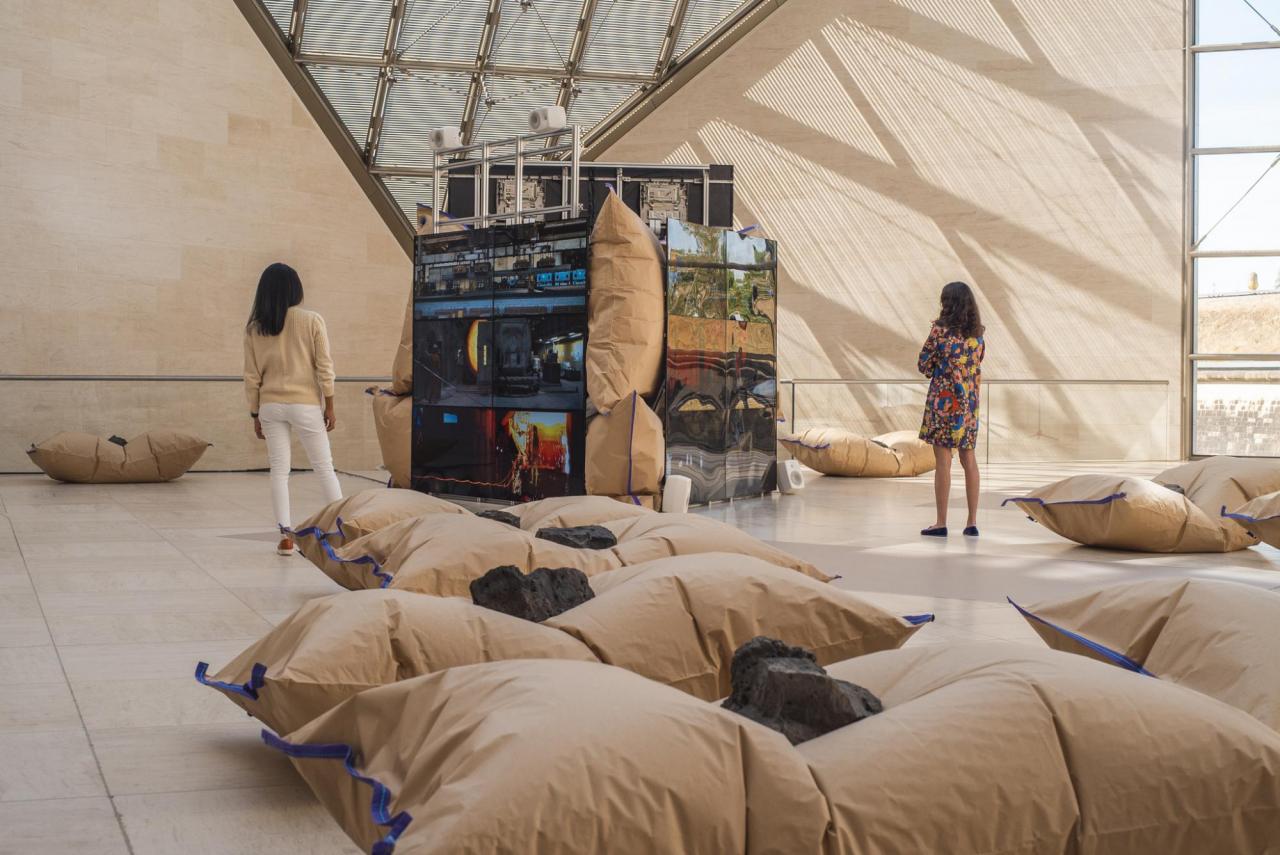 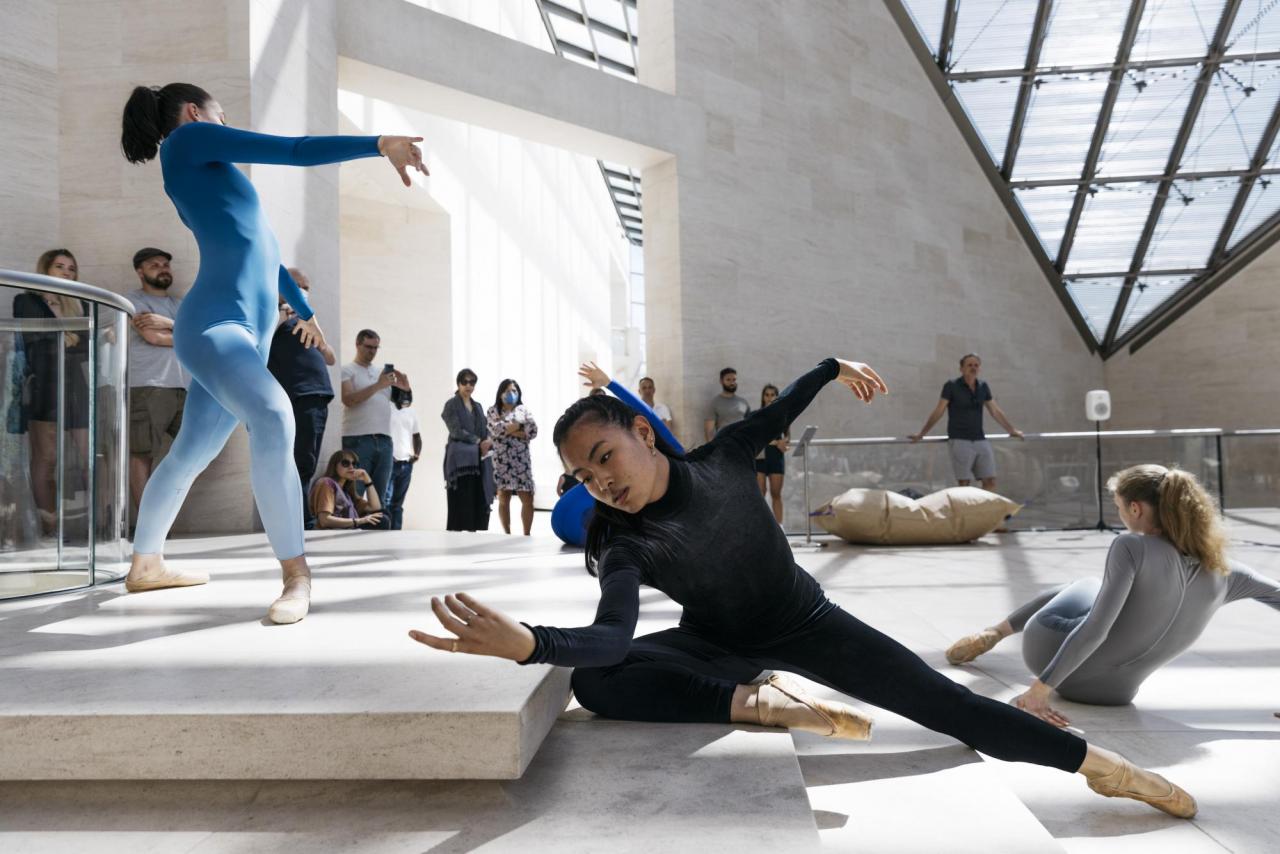 In a weathered cement ruin — the foundations of a former steel plant furnace in Esch-Belval, Luxembourg — a group of teenagers have claimed a site of ostensible decay. Equipped with climbing harnesses and sunglasses, the slender figures emerge onto the crumbling edge against the spectacular backdrop of new cranes at work and old furnaces asleep, towering over the audience gathered for Cecilia Bengolea’s (*1979) performance, La Danse des Éléments (2022). Mudam Luxembourg and Esch2022 (the campaign programmed by a composite of several municipalities surrounding Esch-sur-Alzette, this year’s European Capital of Culture) have co-commissioned the Argentinian artist and choreographer to create a new body of work that takes the long-gone blast furnace as its starting point, both a stage and a referential background.

As the artificially reproduced sounds of heavy industry echo through the ruin and dissolve into an experimental dub track, the nine young ballet dancers’ movements unfold into quite something else. Though Bengolea is known for fusing elements such as dancehall, Thai boxing, and voguing with classical ballet, it still comes as somewhat of a surprise when the 2014 trap hit “Brick in yo face” by Miami gangster rapper Stitches blares through the sound system — the beat has been compared to “a cargo train with Godzilla behind the wheel,” as Stitches relentlessly barks “I love sellin’ blow!” over and over again. It’s a curious sensation to watch as the dancers, graduates from the Jeune ballet du Conservatoire national supérieur de musique et de danse de Lyon, reinterpret this outburst en pointe, as well as the following EDM and dancehall tracks in the mix. Bengolea merges demonstrations of the dancers’ flexibility and strength with movements referencing dancehall and hip-hop choreography, alluding to the lyrics in real-time through gestures mimicking actions like rolling a spliff or waving a gun. At times inevitably cringey in its attempt at “contemporaneity,” I was ultimately impressed by the performers’ ability to adapt their conditioned bodies to a choreographic language in which they seemed to find themselves out of their element — but we’ll come back to that.

Change of scenery: In Mudam’s Great Hall, far removed from the industrial context in Esch-Belval, some byproducts of the steelworks industry have found their way into the larger frame of Bengolea’s new commission, Deary Steel (2022). Jagged lumps of slag, leftovers from the steelmaking process, are incorporated into a sculptural intervention across the museum’s grand atrium, framing a multi-channel video installation in its center. While the previous setting suggested the demise of what used to be “forbidden cities” of heavy industry and labor in favor of a perfected post-industrial transformation project, there is in fact still an active plant in Esch-Belval, which the artist visited to shoot the footage now on display at Mudam — the curatorial accomplishment of establishing this dialogue across venues and symbolically disparate architectures (the steel industry historically being one of the main sources of Luxembourg’s wealth) should not be left unmentioned here. Bengolea takes us on a trippy video game-like ride through the furnace, juxtaposing shots of boiling iron with recorded statements about female workers’ rights, and a wild set of references from alchemy and Chinese healing rituals to archival footage of the early 20th century danse libre movement. The dancers are present again, now confined within the glitchy outlines of their bodies against the green screen. A 3D-animation of a pregnant superwoman-like avatar bearing a likeness to the Maschinenmensch from Fritz Lang’s Metropolis (1927) extends the dancehall-inspired choreography, clumsy at times, first like a knight in cumbersome metal armor, then again performing a split and spinning to take off like a helicopter. Seeing the (real) dancers scatter throughout the Great Hall for the second iteration of the performance almost comes as a relief — essentially, they are what holds it all together.

Where the procedure of steelmaking is extractive, Bengolea’s approach is an accumulative one. I can’t help but wonder if this eclecticism is a strategy to avoid accusations of appropriation in the context of her practice’s recurring encounters with dancehall culture. Interestingly, Bengolea once stated that “ballet and dancehall are not supposed to meet in one same body.” This might just be at the core here: The performance does not (and cannot) claim ownership of the movements it references. Instead, willingly or not, it makes it all the more obvious that having been disciplined from a young age to fit into extremely peculiar aesthetics, the dancers’ bodies — no matter how perfectly capable of executing any movement — still cannot be remolded into something they’re not. The balancing act witnessed here is their trained professionalism being confronted with the expectation to represent a cool youthfulness. Just like steel: once forged, it’s pretty hard to bend it into a different shape. However, varying the alloying elements or bringing another unexpected factor into the equation might change the material’s ductility (its ability to be deformed without losing toughness). While Bengolea’s nod to the elemental properties at work in steelmaking via the dancers’ color-coded unitards (red and orange for fire, blue for oxygen and water, and earth tones to represent minerals and ore) initially seemed a rather obvious means to an end, the personification of the disparate energies that the dancers eventually came to represent as the thirty-minute choreography unfolded, turned out to be the most intriguing aspect. Their individual strengths and perceived discomforts, their respective characters’ dynamics in interaction, making eye contact or mouthing a line of the lyrics in emphasis (as one does when feeling a track) indeed built up to a collective energy, in its strongest moments, ultimately reminiscent of kids breaking into a building site, and having a blast.

LINNÉA BAKE is a curator and writer based in Berlin.