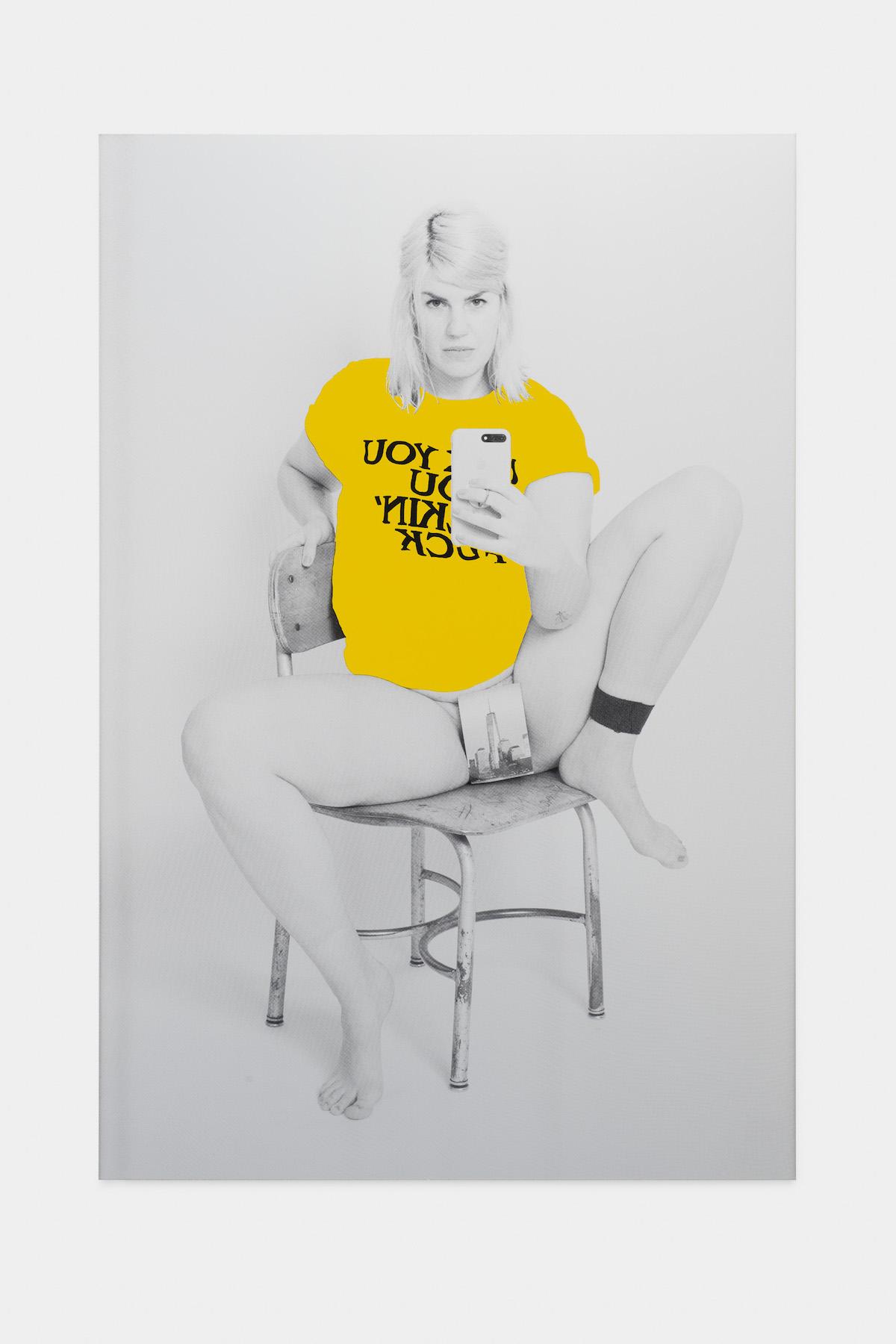 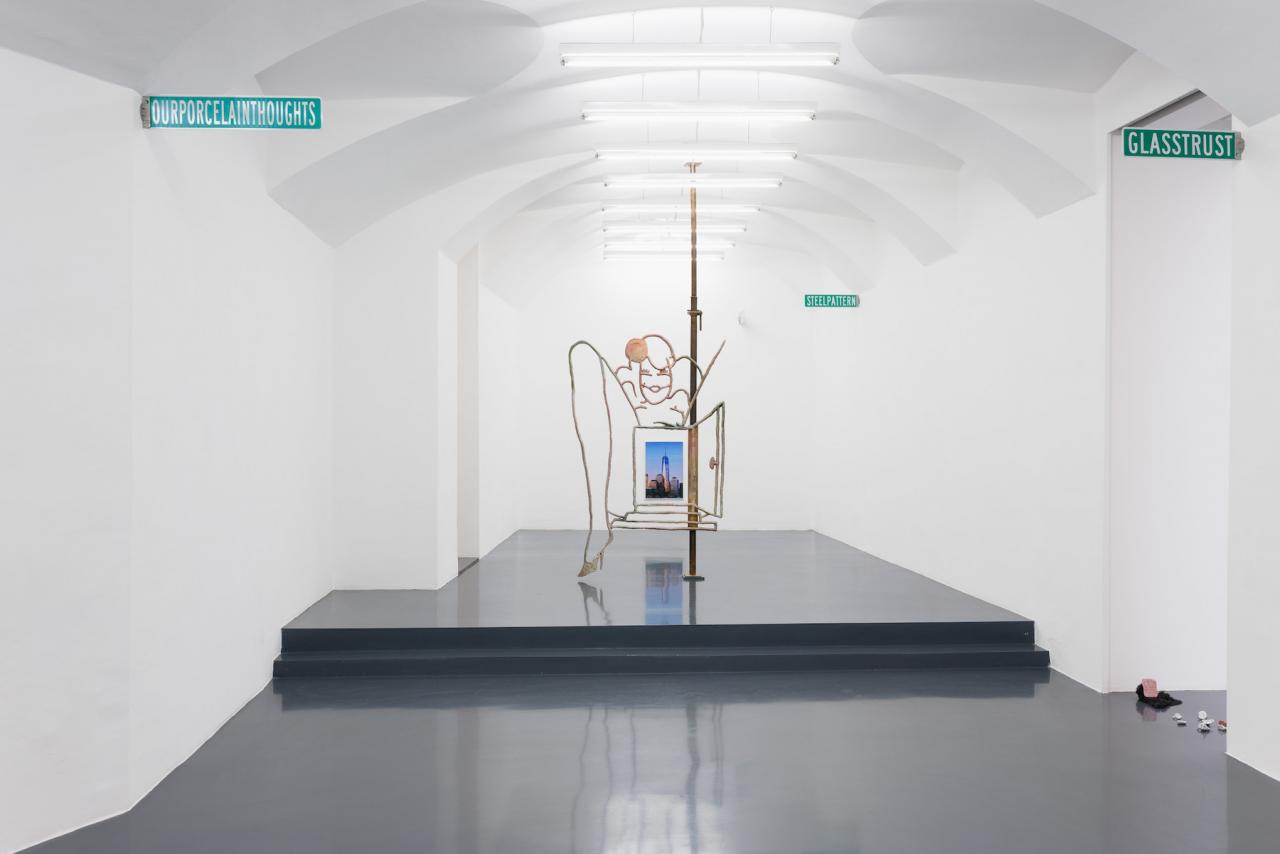 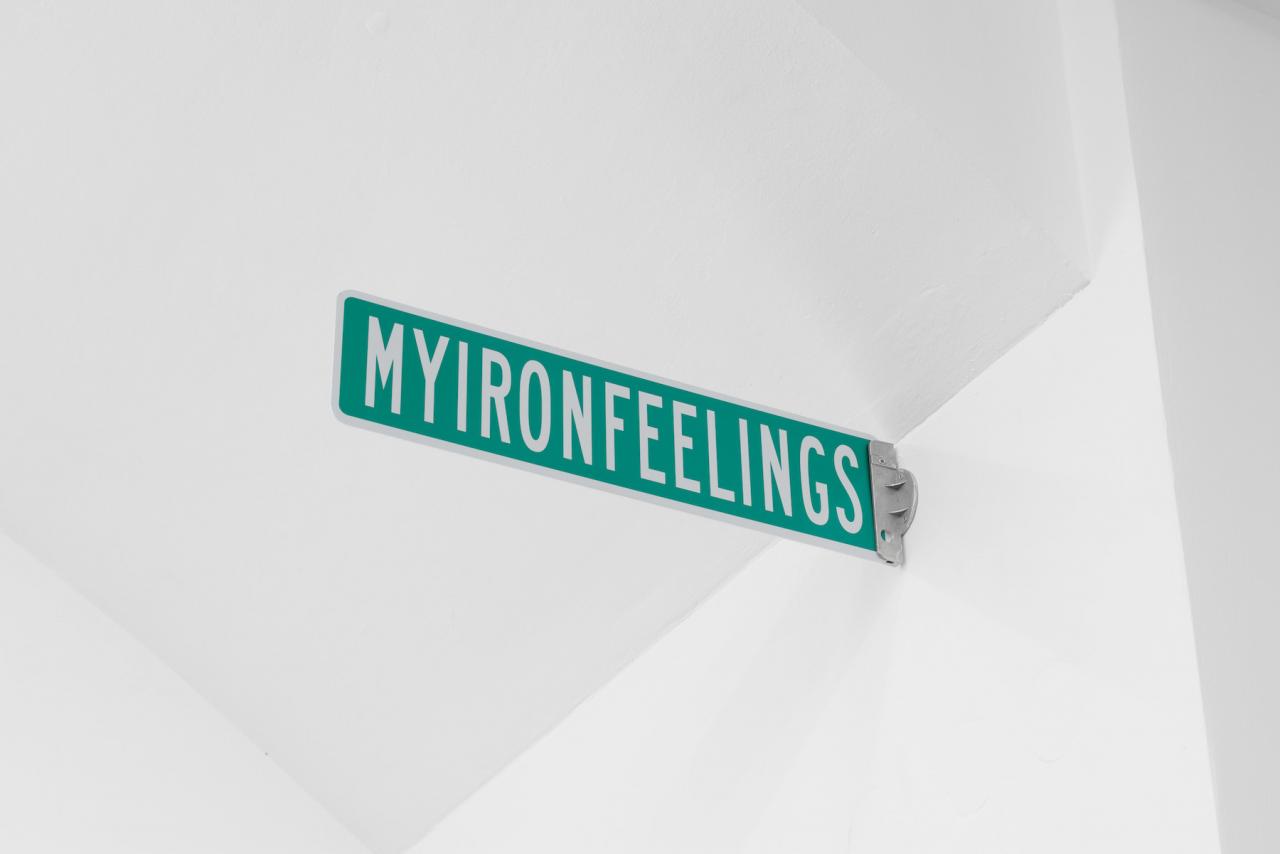 An interview with the artist as she puts the finishing touches to her solo exhibition "THEMOVE", opening at Galerie Emanuel Layr in Vienna.

Instantly engaging New York-based German artist Lena Henke (*1982), studied at the Städelschule in Frankfurt in the class of Michael Krebber. Since then, she has developed a distinctive transdisciplinary practice backed up with post-conceptual theoretical smarts. I talked to her as she set up her show "THEMOVE" at Vienna’s Galerie Emanuel Layr about possible turning points in her practice and the distinctive role of place in her work.

It looks like there are some continuities with some of your earlier work—issues like the distinctiveness of place, and your use of a certain sort of ‘urban’ design and materials. How does that play out here?

The name of this exhibition, "THEMOVE", is significant because it connects up my own autobiographical details with my interest in place. It mirrors what it says on the street signs placed on the walls of the gallery. Designed like New York street signs, and visible at the same height, their names, like "INNERCIRCLE" and "OURPORCELAINTHOUGHT" come from words and sentences from my own psychotherapy and the materials I’m using in my work. Then there is the context of this specific exhibition. This is coming off the back of a solo show at Kunsthalle Zürich. Switzerland gave me the solitude to dive into my work, but it feels like I’ve found myself in a new place, but I’m trying to work out what that means.

I’m sceptical about newness and novelty. I find it hard to believe that anything can be truly "new" except longing for the new. What is particularly "new" here?

I’m using my own body as material for the first time. The first thing that you see when you walk into the gallery is a half-naked self-portrait. It’s a two colored screen print on aluminium, and I’m wearing a yellow t-shirt that says "Fuck You You Fucking Fuck", which I saw people wearing in New York last summer. The yellow is the same yellow as New York taxis, and ties into the merchandise store we have at the back of the gallery. They’re all specifically New York references, and I never thought I’d find myself using my body like this, but Zürich helped me get there. The show itself, however, is about idols.

Do you mean idols as in people you idolise like heroes, or idols in the religious sense of idolatry?

I mean heroes. My idols for this show are 1850s female gangsters in New York City. My self-portrait is the point of continuity, but the centrepiece of the show is a huge bronze female body with a door where the vagina would normally be. To make it, I had to draw into a big sand-bed. It’s fantastic, switching from 2D to 3D. The backside is flat, but you can see the scorch marks from where we poured the bronze. Plus, if you use a glove, you can turn the who thing around. I think it looks like a poledancer. This is a very interesting subject—who is looking at who, who is looking back, where the power lies. The front side has a pinkish, greeny patina on it that is really hard to get. It’s what a Barbie would look like if it fell into a patch of oil.

It looks like something from an archaeological dig into the fossilised Miami of the future, an eerie rendering of those famous pastel shades. Is this another point of continuity between the sense of place, your use of materials, and the particular shape or structure of the gaze?

That’s funny, because I went to Miami very recently. Put it this way, I live in New York because it kicks my ass. I live very close to the area I’m talking about in terms of mid-19th century gang activity: the old Five Points, which you might know from Gangs of New York. Gangs like the Bowery Boys or the Dead Rabbits always had a sign to show who they were, but in my imagination we ended up in 2018 on Canal Street with all these trashy t-shirts with different printed material on them.

I put it on for the photoshoot, and it’s mirrored because I’m taking a selfie. The Freedom Tower is on a postcard between my legs, like a perfect but anonymous glass and steel phallus. The original image is from a shitty 99c postcard that I scanned at the highest resolution possible. I don’t think people will actually buy this postcard, but it’s the perfect symbol of New York’s distinctive hyper-masculinity: the pace of life, the constant noise, the relentless rational grid-form. That’s one of the things I’m trying to capture.

MAX L. FELDMAN is a writer based in Vienna.