In the Light of Doubt
by Alexander Scrimgeour 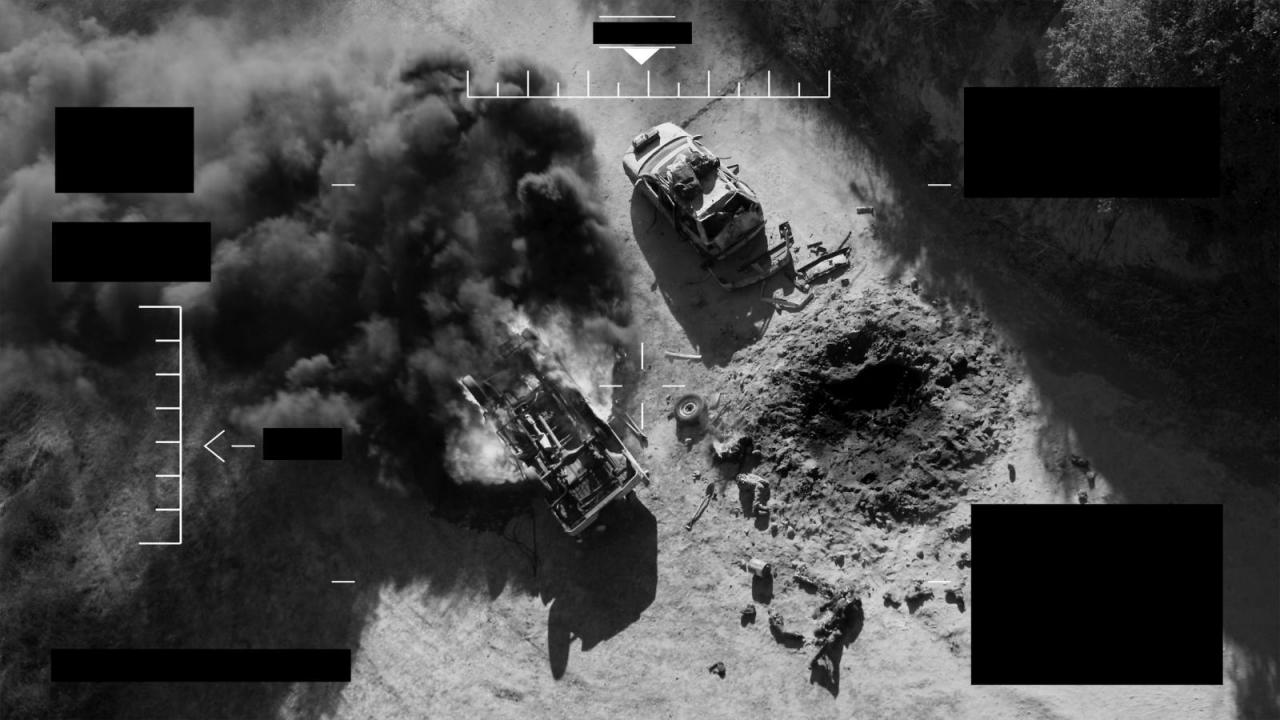 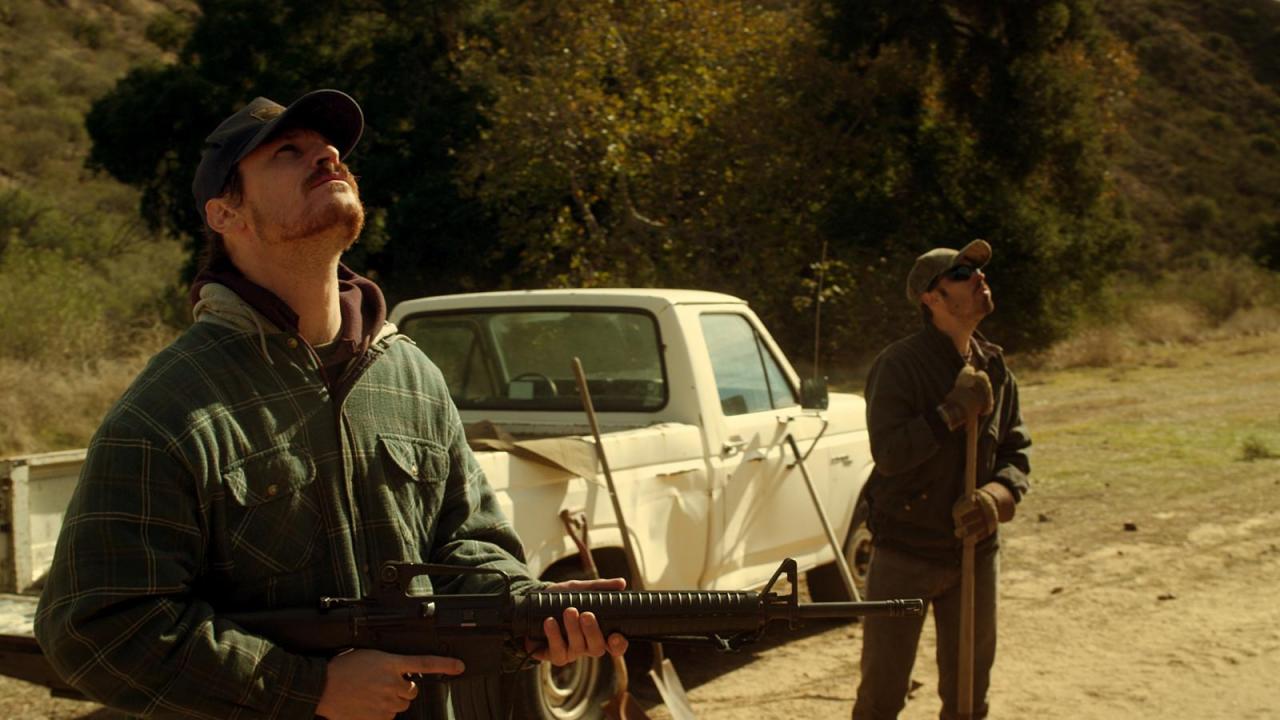 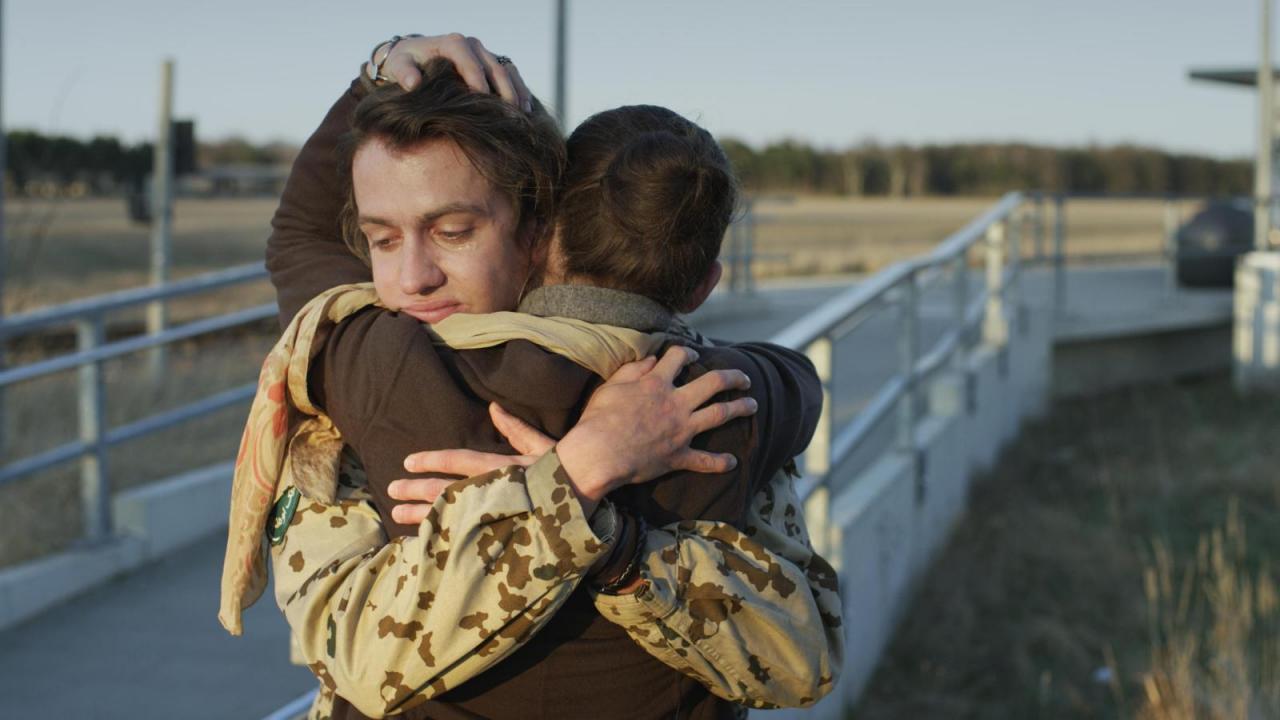 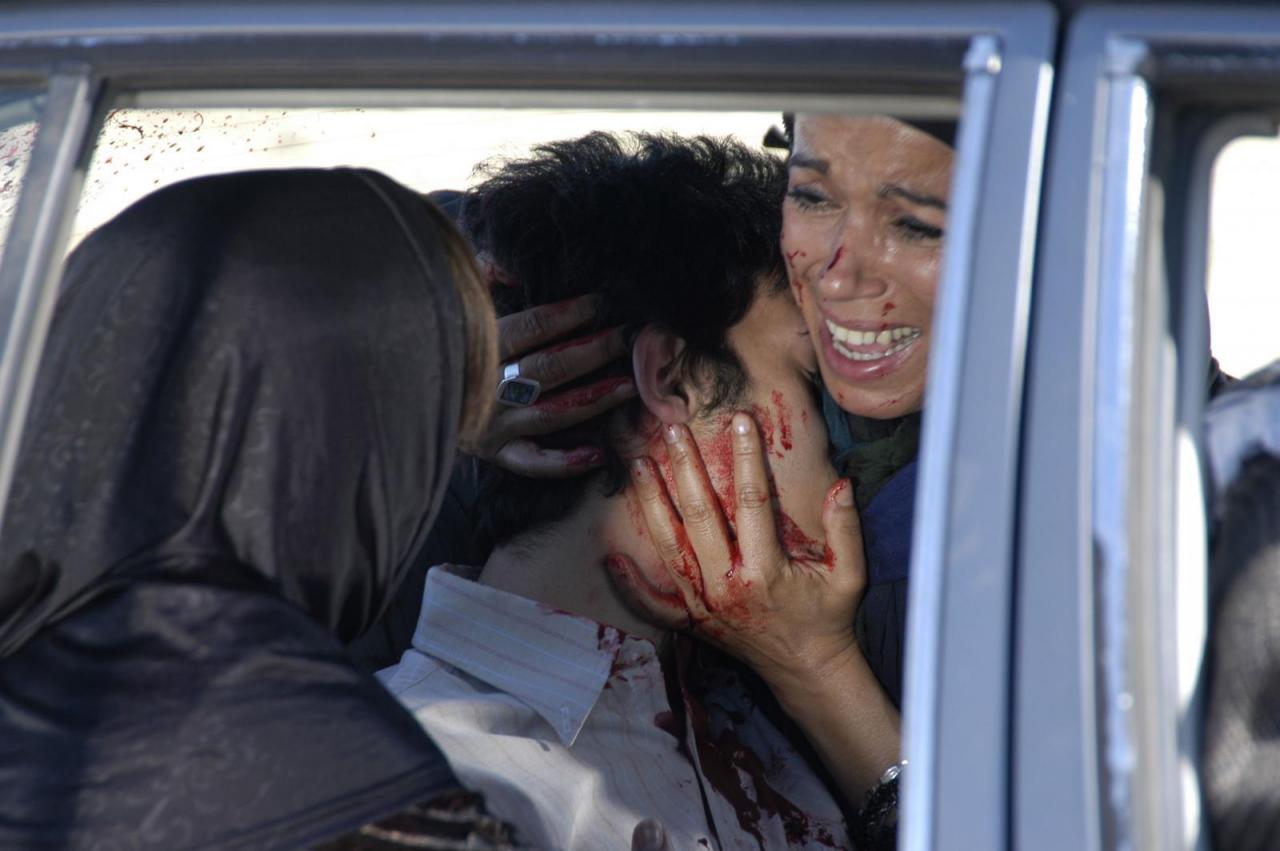 The perfectly crafted, deeply unsettling films of Omer Fast revolve around the traumatic experiences of refugees, soldiers returning home from war and drone pilots. In a constant interplay of immersion and alienation, they turn filmic illusion against itself.

The sense of an aftermath hangs heavy over Omer Fast’s work. From the unspecified disaster that brings a white British asylum seeker to seek refuge in an unnamed African country in Nostalgia III (2009), to the experiences of the Texas-based drone operator interviewed in 5,000 Feet is the Best (2011), to the Holocaust as narrated by Polish extras in Spielberg’s List (2003), to Fast’s feature-film adaptation of Tom McCarthy’s novel Remainder (2015), which begins with something falling onto the protagonist’s head from the sky, we are dealing with the post-traumatic. Fast uses devices of repetition and reenactment as means of responding to, or working through, such trauma. In Fast’s work, these devices also function to turn our gaze to questions of filmic representation, shifting the focus from the story to its telling.

In his 1996 essay “Obscene, Abject, Traumatic”, Hal Foster writes: “In contemporary art and theory, let alone in contemporary fiction and film, there is a general shift in conceptions of the real: from the real understood as an effect of representation to the real understood as an event of trauma.” Fast’s art occupies the ground between these two models, probing the places where they collide and overlap, turning the one into the other until the two become something else that can’t be summed up so neatly. Often this has the effect of putting the viewer into a nauseous state of vertigo that feels as claustrophobic as it is inescapable.

In Continuity (2012), and its new director’s-cut follow-up, Continuity (Diptych) (2015), a middle-aged German couple picks up their son, Daniel, from a rural train station. He has apparently just returned from his deployment in Afghanistan, in light of which their first question seems unnecessarily cruel: “Have you been smoking?” There are further cringe-inducing moments, such as when his mother sits next to him at the dinner table and says “I know how you feel” shortly before he hallucinates the spätzle noodles on his plate turning into maggots. Later she gets into bed with him while he pretends to sleep, and slips her hand under the blanket to run it up his thigh. But then the sequence of scenes starts over – with another, cheerier version of Daniel – and everything is cast into doubt. The sequence is repeated three times with different actors, who are, it is suggested, hired substitutes for the couple’s own dead son. This realisation, which is never quite put beyond doubt, is nevertheless shocking: it throws you off and forces a double take. Its effects are similar to the almost exaggeratedly emphatic “falseness” of a scene in which the couple are once more driving along a country road on the way to the station. They see a camel wandering down the middle of the road, and when they follow it into the woods, they find the aftermath of a battle. The scenario is one that many viewers will recognise: it is based on Jeff Wall’s light-box photograph Dead Troops Talk (A vision after an ambush of a Red Army patrol, near Moqor, Afghanistan, winter 1986) (1992) – although, in Fast’s film, an Afghan enters the shot and collects weapons from the dead soldiers. The meticulous staging of the scene suggests how much Fast’s work involves a self-reflexive exploitation of the idioms of certain genres, as Wall himself mined the image-repertoire of war and horror movies and history paintings. This itself already creates a particular relationship to “reality”. Fast has spoken about how he sees his work as portraiture: it is always driven by conventions of representation and the dynamic between artist and sitter. The question of what it is a portrait of is itself complicated, but it becomes secondary to how the work functions like a relationship: through intimacy, desire, and projection. But – subtly, strangely – this doesn’t diminish the significance of what remains external to the film: Afghanistan, for example, is given the same function for the viewer as the young men standing in for Daniel have for his parents: both are displaced by their representation.

A similar spillage between filmic reality and a timely, quasi-documentary political frame characterises 5,000 Feet is the Best, in which recordings of an interview with an actual (pixelated) drone pilot are interspersed among footage of an interview with an actor playing a drone pilot and reenactments of some of the stories he tells. The film again makes use of doubling, with three cycles of repetition-and-variation. It is set up as an unsolvable puzzle. Pointers and signals push it beyond straightforward comprehensibility, making it about something far broader and more complicated than its ostensible subject.

Fast has said that “to think about the work in terms of truth and lies or truth and fiction is to kill the work.” While it’s clear what he means, it is slightly disingenuous, as nearly all his films start out from and get much of their energy from interviews or witness testimony. His work seems, rather, to argue that filmic reality always has a complex relationship with historical reality, and to prioritise the former. In Spielberg’s List, for example, the testimonies of the Polish extras living around Krakow reveal nothing so much as the way the one turns into the other: tourists want to see the locations of Schindler’s List as much as the actual Nazi extermination camps. And it is rarely clear whether any of the stories told by the extras refer to the history of the Holocaust or Spielberg’s movie.

Fast’s attraction to filmic and narrative complexity could easily seem almost baroque, even mannerist, were it not for the fact that it often has unexpected and poignant effects, less in spite of than by means of the way it problematises the relationship of the subjects of his films to both the resulting work and the artist/director (who is himself often played by an actor). Take The Casting (2007), where two narratives blend into one another: the story of a US soldier deployed in Afghanistan and accidentally killing a civilian is spliced together with a story about the same man going on a date with an emotionally unstable woman in Germany. The work is a two-screen installation shown back to back in which one screen shows a heavily cut yet audibly seamless interview with the ex-soldier, while the other switches disturbingly between reenactments of both stories, mismatching story and setting. This montage exposes not only the irreconcilability of the two domains of what is seemingly one soldier’s experience but also, paradoxically, their unlikely congruence. The entire thing, moreover, is framed as a kind of casting interview. Towards the end, the director supervising this casting speaks dismissively of the soldier’s narrative, explaining: “I’m interested basically in the way that the experience is turned into memory and the ways that memories become stories, the ways that memories become mediated ....” Fast has said, however, that this was made upon a whim as a provocation and is “a complete lie”. He evidently wants to keep the intentions ascribed to his works open.

My sense is that Fast wants to mess with your head. He wants his works to remain troubling long after you’ve seen them. Complexity is one path for this; technical excellence another. So if it can happen – as it does to the protagonist in Fast’s film of Remainder – that the originary trauma is processed by being turned into a formal problem, Fast is well aware of the ethical problems this poses. Indeed, going further than in the original Tom McCarthy novel, he portrays the protagonist of Remainder as a sociopath who exists within a vacuum – an amoral, autonomous zone – and is driven by an artist’s/filmmaker’s perfectionism as he re-stages first personal memories and then actual events. Eventually, this pursuit of verisimilitude leads him to intervene in reality, with fatal consequences not only for cats but also for humans he has long stopped caring about.

Part of the unease created in Remainder, as in Fast’s other work, derives from how one’s emotions become engaged even as they are repeatedly and mercilessly detourned – as if feelings were also a “plaything” (another of the artist’s disparaging descriptions of his treatment of the line between reality and fiction). This is exactly what makes his films hard to watch and equally hard to turn away from. And this is also where I’d locate the sense of art’s ethical purpose that I hope I’m not just projecting into his work. Others seem at least to feel something similar, as when Daniel Baird writes in the Brooklyn Rail that “the deep, queasy ambiguity Fast inserts into what appear to be narratives prevents anything from emerging clearly,” or Tom Holert in Artforum of “the sense that one is being fooled into a somewhat nightmarish limbo of just-not-getting-it.” I am tempted to quote a line of critic Harold Rosenberg’s: “As the Marquis de Sade understood, even experiments in sensation, if deliberately repeated, presuppose a morality.” Seen thus, the doublings and repetitions throughout Fast’s work, not to mention how painful much of it is, argue for art as a site for witnessing differently, even as they confront concrete issues such as war, asylum, and historical trauma. The artwork, that is to say, is treated as a privileged if morally problematic site for certain difficult kinds of affective and intellectual labour. For this to succeed, Fast takes away all the usual supports that guide our consumption of stories, including those of clarity, catharsis, and closure.

Alexander Scrimgeour is Spike's editor at large. He lives in Berlin.

This text appears in Spike Art Quarterly N° 46 and is available for purchase at our online shop.