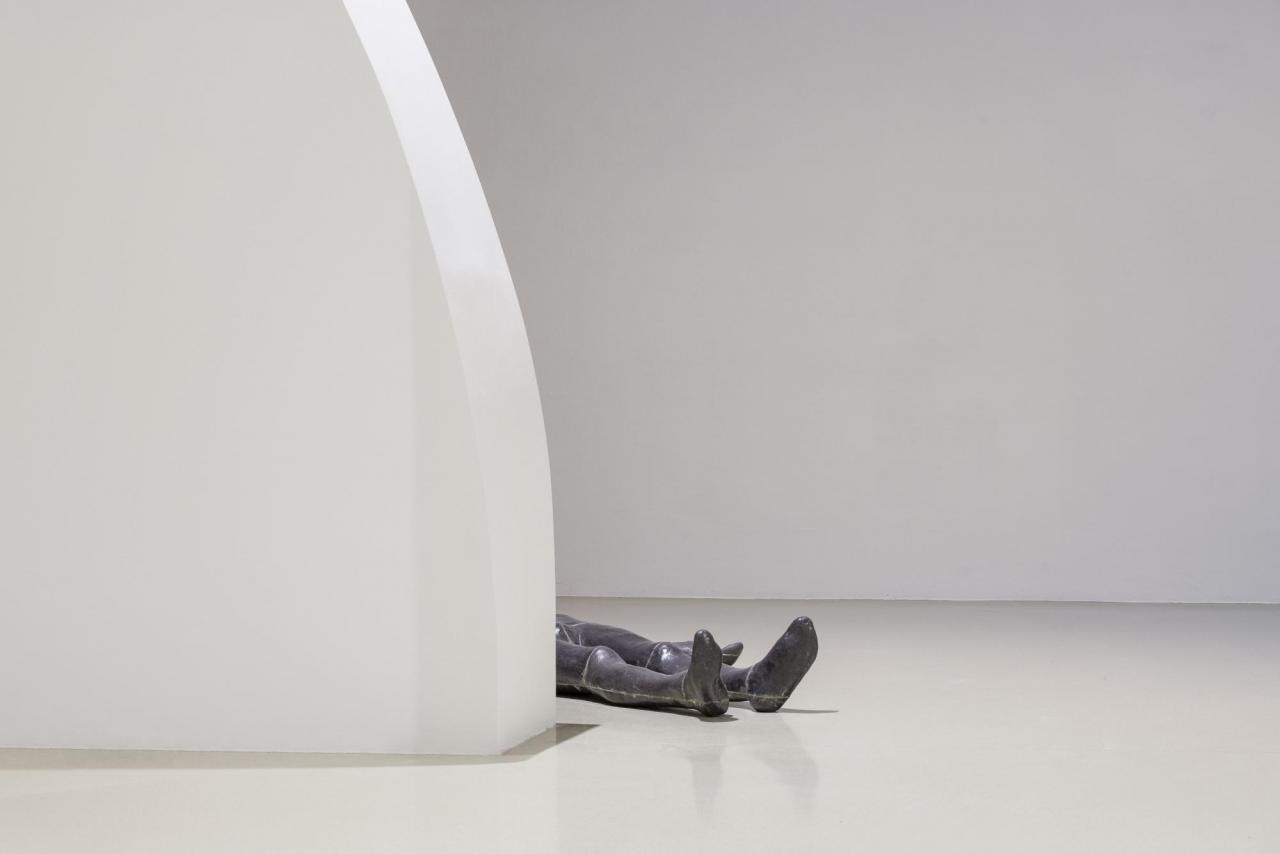 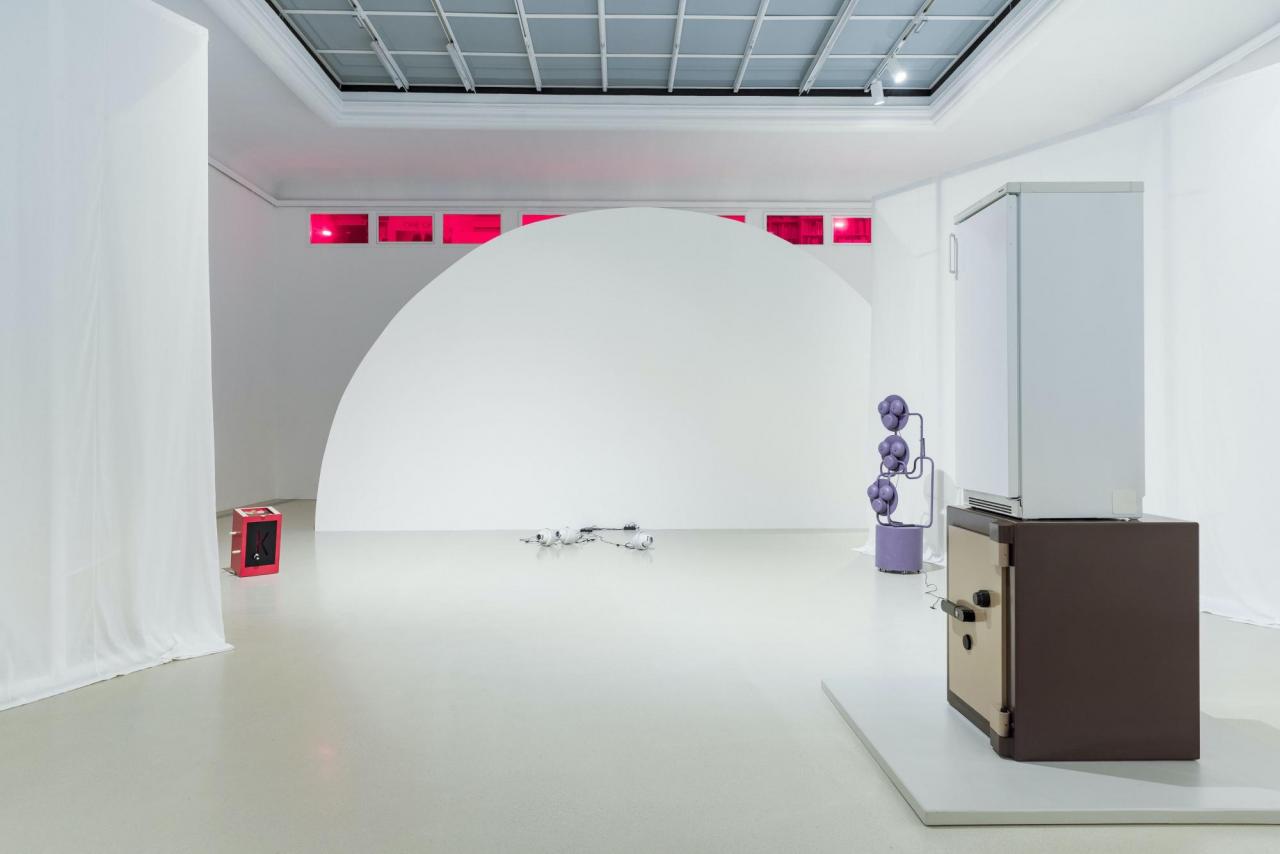 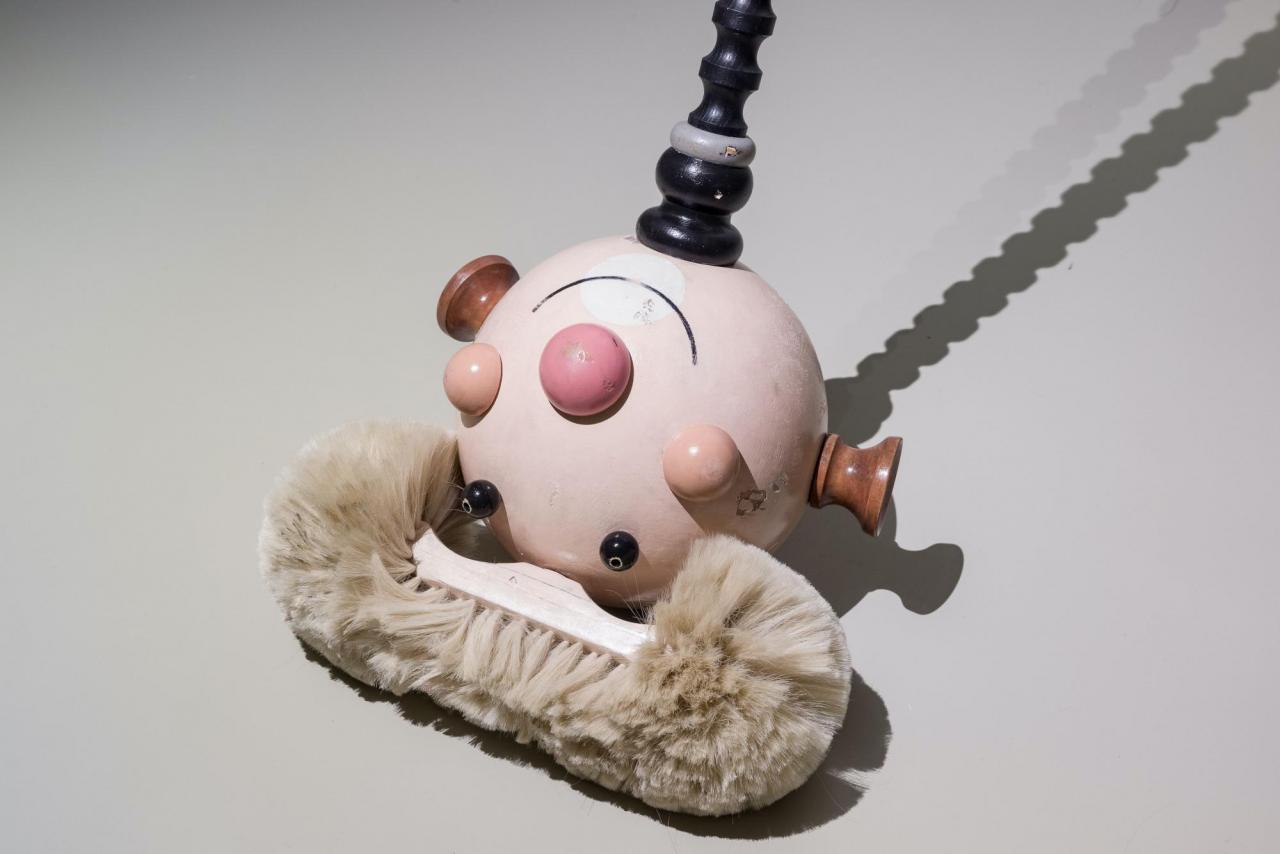 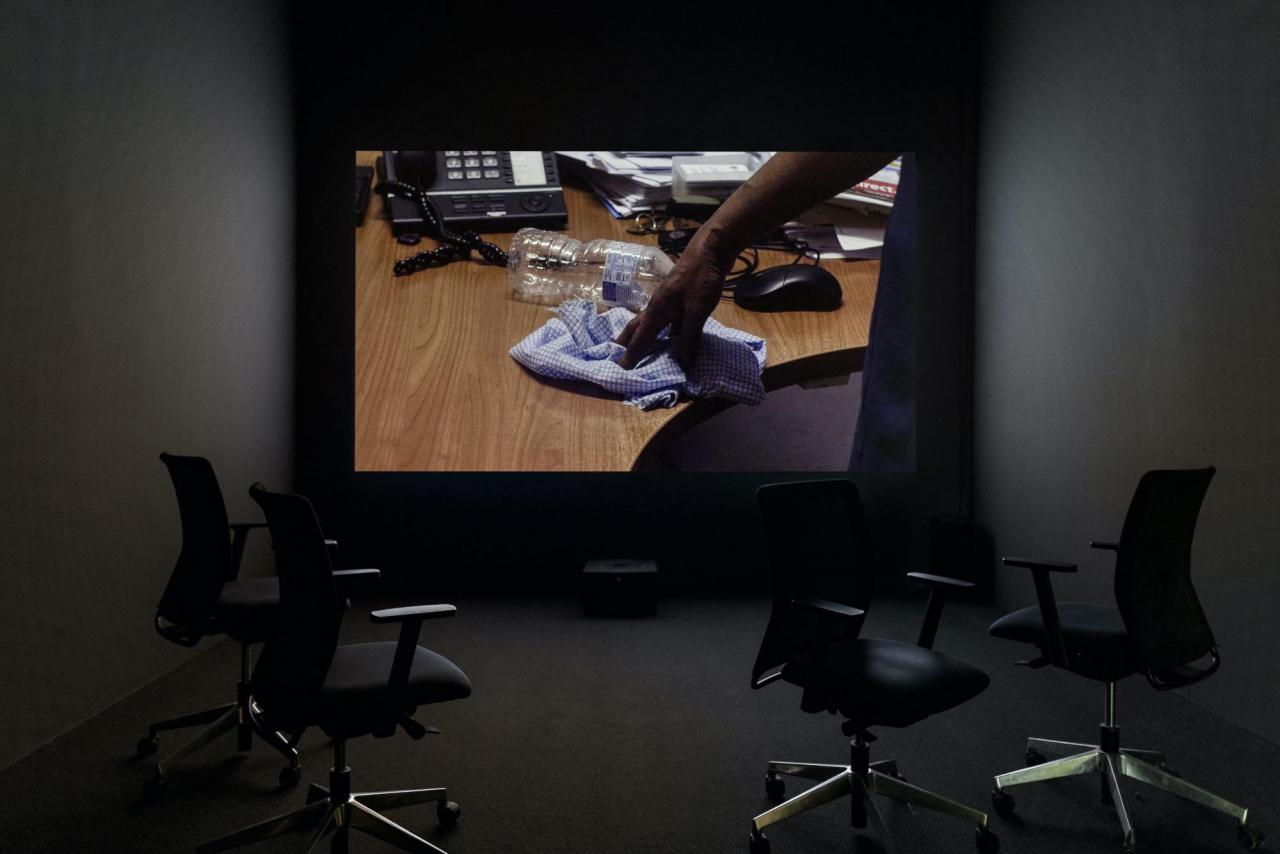 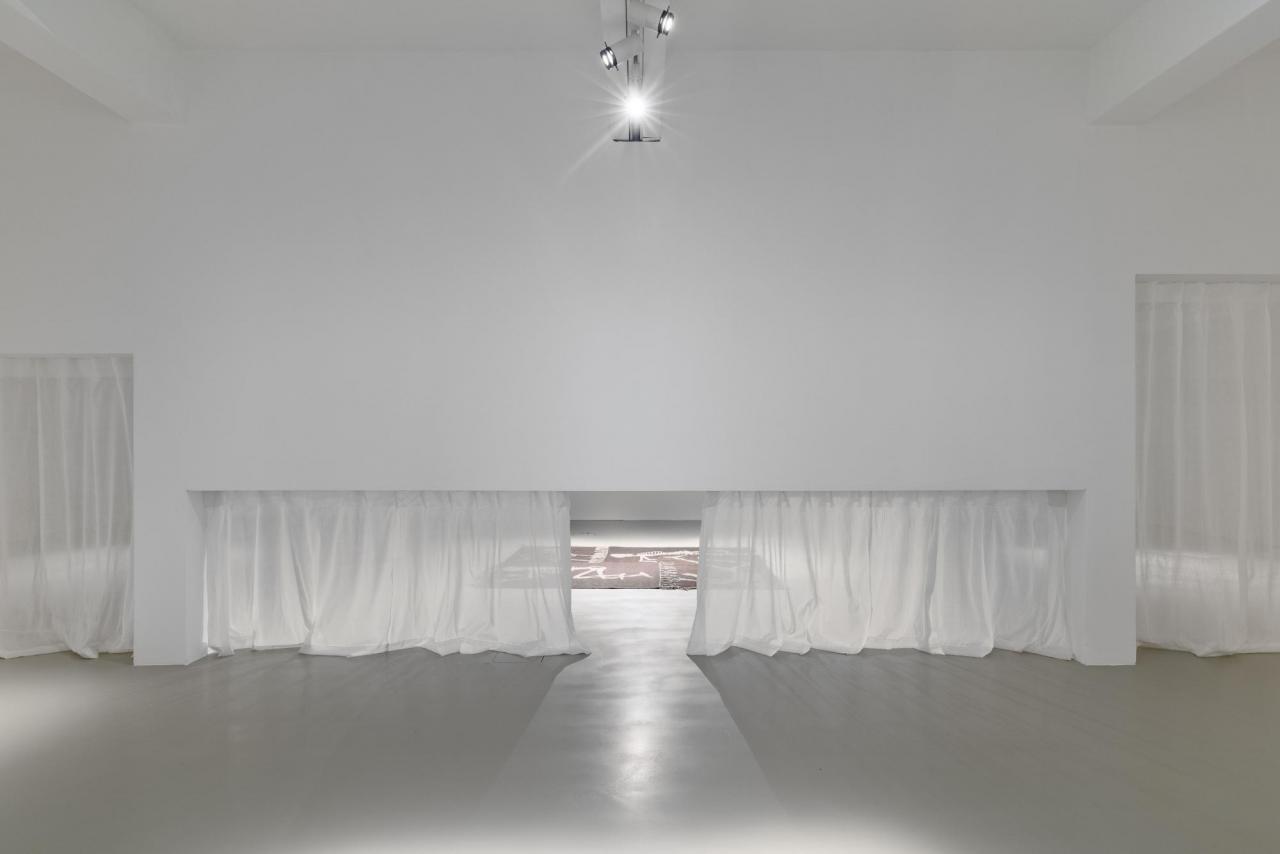 The private is public; the personal, political: the stuff that fills our “home sweet home”, asserts a group show in Graz, is loaded with baggage from the world outside.

The German psychiatrist Ernst Jentsch, in his analysis of E.T.A. Hoffmann’s tale The Sandman, defined the uncanny as the uncertainty over whether an animate being (tellingly, a woman) might in fact be a lifeless automaton. Often, though, it is the converse: the apparent animation of an object – a book or a broom, for example – that conjures an uncanny feeling. The secret lives our belongings seem to live, animated by the social forces that seep into our supposedly private interiors, are taken up in the group show “Domestic Drama” at Halle für Kunst Steiermark, which looks at the objects closest to us – those found at home.

An assembly of scattered forms lulls you into an evocative soundscape upon entry, a dramaturgy of repurposed objects that shows only the faintest hint of human presence or performance, like the glass stains on Olu Ogunnaike’s (*1986) wood table Piece by Piece, 2021. But still, one feels like someone, or something, might be there, watching. If not the robotic, pet-like surveillance cameras that, with squeaky movements, crawl around the floor and seem to raise their heads as they’re approached, then maybe Kareel Kurismaa’s (*1939) kinetic sculptures, which chime and click, but whose function remains unclear. Is this an early version of an Internet of Things, in which networked devices bring data-driven capitalism directly into our homes? Are these technologies of surveillance and control, or might it be me who intrudes upon them, and watches as a nonhuman drama unfolds?

A video by Nigel Gavus (*1992) & İlkin Beste Çırak (*1994), It’s on a day like this… (2021) – a sober, G-rated take on a year of rest and relaxation – forces us into the private space of a young woman, who, out of boredom, dreams her way into a fascination with the contents of her room: tarot cards, Carl Jung’s “Man and His Symbols”, and a secret box with some dollar notes and other keepsakes. While this work presents the home as an enclosed space in which one only encounters oneself and one’s mementos, Bruno Zhu’s (*1991) architectural intervention suspends such a self-contained understanding of the home. Mobile walls dressed in white fabric subdivide the spacious galleries into smaller rooms and suggest an intimate, private setting. Simultaneously, their portability and perviousness is revealing: this “safe space” is too transparent, too unsettled to fend off external forces.

A sculpture by Camille Blatrix (*1984) (K.O Boxing, 2021) that invites the museum staff to store and lock their valuables in the gallery further complicates the relation between the private and public sphere. While this toy-like container keeps the items safe, at the same time, they are, through a small window, exposed to the visitor’s voyeuristic gaze. The sculptural compound Miele/Fichet-Bauche by Bertrand Lavier (*1949)(1984), consisting of a safe that carries a Miele fridge, shows, similarly, that such acts of storing and safeguarding might be implicated within a capitalist logic: personal belongings are always also commodified as private property. Studying the market’s infiltration of the home, the exhibition maintains an interesting ambiguity towards domestic objects and our relationship to them, which shifts between sentimentality, preservation, and fetishisation.

Drawing on psychologist Ernest Dichter’s The Strategy of Desire (1960) – a handbook in motivational research that investigates ​“the art of influence” and describes the psychological patterns that structure our desire for commodities – the exhibition configures domestic decorations as part of the larger consumer culture and its desiring machines, blending the interior and exterior, the personal and universal, the home and the mall. In Vera Frenkel’s (*1938) two-channel video installation This is Your Messiah Speaking (1990) – first shown on the Spectacolor billboard at Piccadilly Circus – a messiah figure repeatedly declares a Catholic-capitalist version of the well-worn Truism, “protect me from what I want”: “There is no rush, don’t worry: No one will force you to do anything you don’t want to do”. The various negations reveal that we are, in actual point of fact, indeed forced to do what we don’t want to do – shopping or believing, for example. It is through this notion of desire, not as an imaginary force based on lack, but a real, productive energy driven by something that lies both in- and outside of oneself, that the exhibition addresses both our economic and affective relation to consumer goods.

Two films see the home itself, more directly, as a space marked by economic and racial violence. In Larry Achiampong’s (*1974) The Expulsion (2019), the protagonist recalls following his mother, a migrant night-time housecleaner, to work. The poetic retelling of his memories is set against images of the physical and alienating labour of cleaning spaces from which he and his family are “expulsed” during the day. In another film, Dear Babylon (2021), part of Ayo Akingbade’s (*1994) social housing trilogy, expulsion is taken to the level of repressive housing policy. Through a documentary within the film, it tells the fictitious story of three young residents of a public housing project in London’s East End that counter their imminent eviction with a living document of their community. Both films confront the ideal image of the home as paradise with the realities of racism and gentrification and contest hegemonic ideas of domesticity and belonging.

Elsewhere, a beautifully manufactured broom inside a tiny side-room (the glory hole?) figures the home as a site of sexual violence. A wooden penis dangling from its stick casts a strange shadow on the wall; its bristles form the hair of a puppet face, looking at us upside down with tubby eyes. This sculpture, A History of Violence (2021), continues artist Oscar Enberg’s (*1988) series of anthropomorphised household objects and playful interpretations of Sophie Taeuber-Arp’s Dada Heads. A seemingly comical gesture, its title alludes to tragedy – vivifying the uncanny character inscribed into household wares through the feminisation of reproductive labour and its attendant traumas. Now, amidst a pandemic that has forced us either into our home or an increasingly precarious world outside – and here, in Austria, where domestic violence and femicides are on the rise – the exhibition’s title clearly insinuates a sort of tragic, or even brutal, chamber play. By reflecting on its own objecthood, Enberg’s sculpture reminds of its innocence and impotence. A broom, as loaded a signifier as it may be, is powerless to counteract the social relations that organise human desire and behaviour, the wills and social ills that endow it with its charge. The drama going on at home might be restaged, here, by objects, but fundamentally, the exhibition insists, it is played out between the people who cohabitate within those four fraught walls.

SOPHIA ROHWETTER is a writer and researcher, currently studying and working at the Institute of Art Theory and Cultural Studies at the Academy of Fine Arts Vienna.