"The Tears Dress" by Elsa Schiaparelli and Salvador Dalí 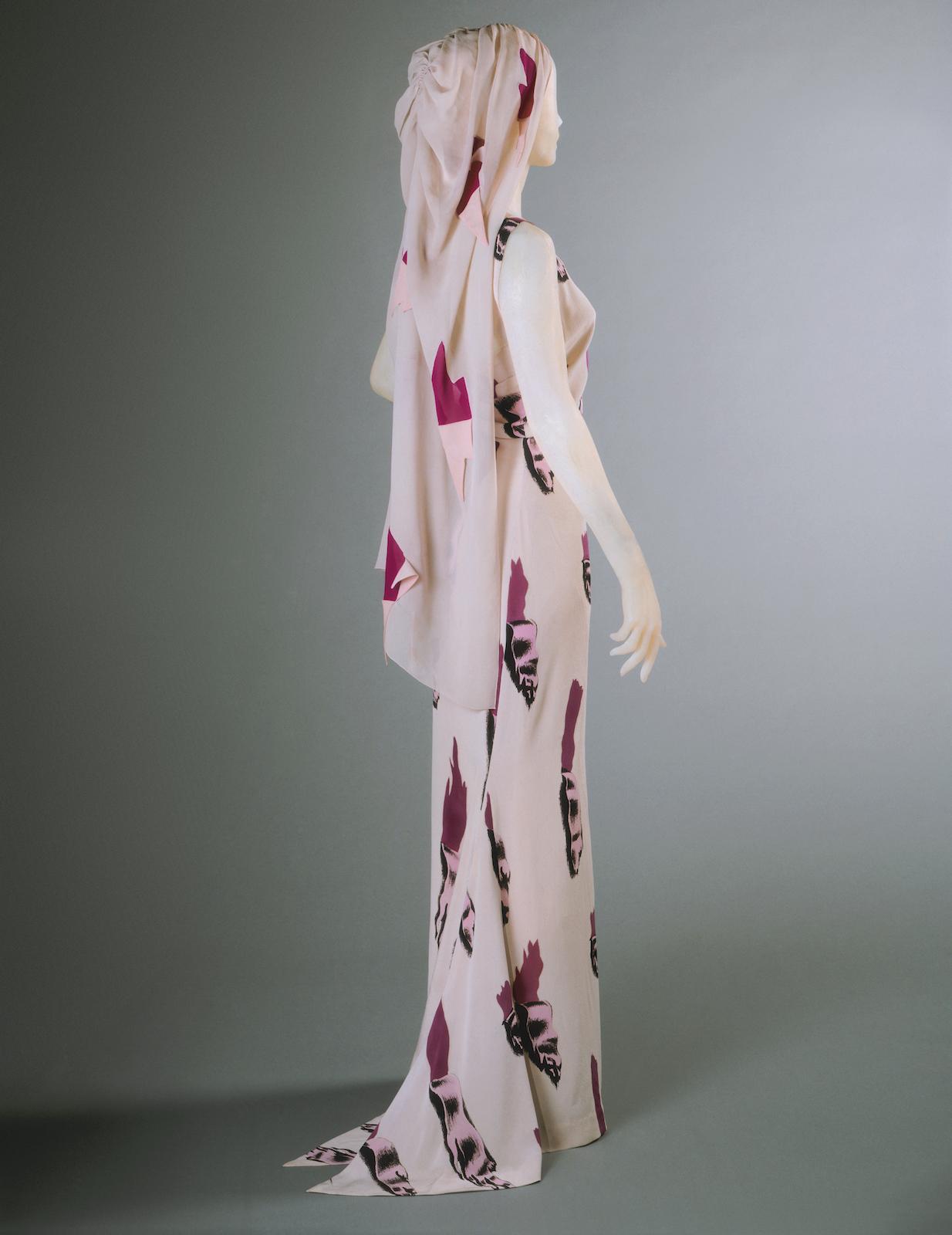 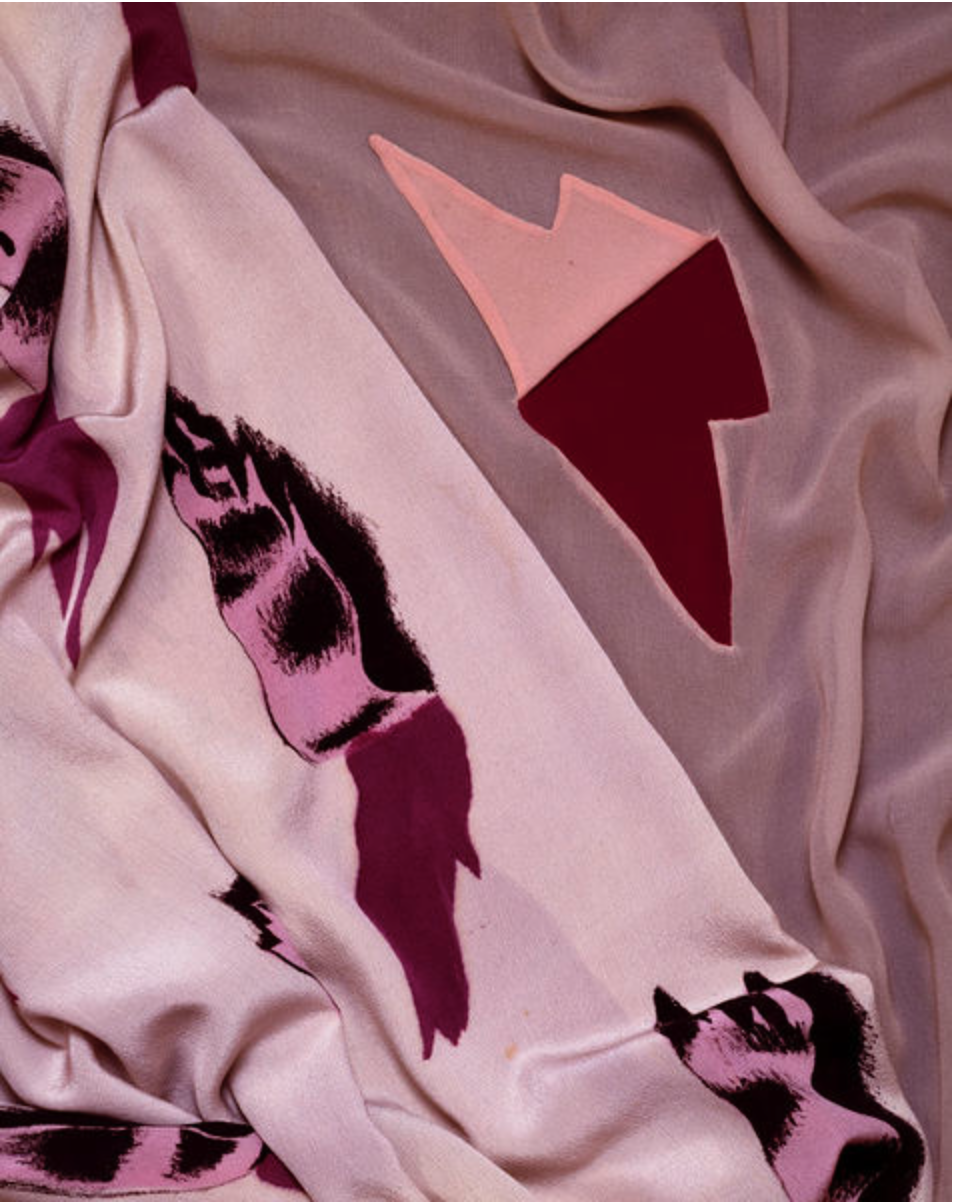 For too long Elsa Schiaparelli has been unfairly been seen as less important than Coco Chanel. A pioneer in uniting the avant garde of art with fashion, she created The Tears Dress with Salvador Dalí in 1938. As Europe stood poised on the brink of another war, this celebrated dress – a Surrealist triumph in faux-ripped crepe – offered a violent, inventive glamour that foretold the horrors to come.

It feels unfair that Elsa Schiaparelli’s rival Coco Chanel became the most eminent star of fashion when it was Schiaparelli’s quirky iconoclasm that pioneered so much of its visual lexicon. Her name is less familiar today although she was the first to introduce zips to high fashion (1929), to design trompe l’oeil garments (a 1927 sweater which launched her career) and enjoyed experimenting with early synthetic textiles. She also produced the first newspaper print fabric in 1935, way before Galliano would popularise his in the 1980s and 90s and presented collections with conceptual themes (“Pagan”, “Circus”, “Zodiac” etc.) before anyone else. Her influence is everywhere, not least in the fashion-meets-art collaboration. Schiaparelli was fashion x art’s founding father, using her connections in the avantgarde to define her brand. She collaborated with many luminaries of the day – among them, Meret Oppenheim, Alberto Giacometti, Man Ray, Cecil Beaton, and Jean Cocteau – and even helped stage the “First Papers of Surrealism” exhibition in New York in 1942 with Marcel Duchamp and André Breton.

She described these collaborations as offering a sense of exhilaration “beyond the crude and boring reality of merely making a dress to sell”. Miuccia Prada has called Schiaparelli’s collaborative work with Surrealist dandy provocateur Salvador Dalí “the only real relevant experiment [of this kind] that was meaningful” and indeed it is Schiaparelli’s most celebrated partnership. Together they made one of her most iconic pieces, The Tears Dress. Produced in 1938 on the cusp of a world in ames, it’s a hip-clutching riot of a mourning dress in creamy blue crepe (now faded with time to a milk white) ayed with carnal pink trompe l’oeil print rips. The look is finished with a thigh-length veil replete with matching appliqué tears and frothy labial gloves rufflee-gashed from dorsal to elbow. The ensemble’s violent glamour conflates skin and fabric in a continuation of the surrealist preoccupation with exploited and exposed female forms to both ravaged and ravishing effect in a portent of the horrors of war.

Historian Judith Watt called the Tears Dress a “singularly hostile work”, intended to question the notion of fashion itself in Vogue on Schiaparelli (2012), while in Fashion and Surrealism (1989) Richard Martin draws a connection to the Spanish civil war and the spread of fascism throughout Europe (it was launched, as part of her “Circus” collection, on the day that Adolf Hitler seized control of the Wehrmacht). Others have seen the piece as a precursor to the trappings of the punk movement.

The look was inspired by Dalí’s 1936 painting Three Surrealist Women Holding in Their Arms the Skins of an Orchestra, in which three gures populate a barren Catalan shore wearing full-length gowns and faces sprouting flowers, the dress of the central gure torn in tatters. In her autobiography “Schiap” recounts suffocating on seeds placed in her throat, ears and mouth as a child in reaction to a mother who called her ugly – “to have a face covered with owers like a heavenly garden would indeed be a wonderful thing!”. No wonder she would grow up to be the first to cut surrealism in cloth ...

The radical bohemian movement inspired by Marx and Freud offered an escape to a landscape dredged from the realm of the unconscious, far flung from the conventions and political discord of the time. As Europe tipped into industrialised warfare, Dalí wrote in 1940, “Our civilisation is too mechanical. We can make the fantastic real, and then it is more real than that which actually exists.” The surge in interest in the dreams and mysticism of Surrealism and the playful anti-reason of Dadaism were clear reactions to uncertainty and state death, tech, offering the same sense of pseudo resistance that memes, gamer culture, YouTube esoterica, and Weird Twitter (hail @dril) offer from the confusing, accelerated media theatre and creeping fascism of our own time. It’s too tempting, too easy to compare the salons of Schiaparelli and her peers to today’s blend of artists, designers, thinkers, and shitposters busying themselves with information warfare anxiety, relishing systemic collapse or anthropocentric memento mori on social media. I do wish I knew more young fashion designers tucking Verso paperbacks into their back pockets but I suspect I’m being invited to the wrong parties.

"When war broke out for Schiaparelli she downsized and fled to New York, but the tastes of a post-war climate were a death knell for her and she eventually shut up shop in 1954"

When war broke out for Schiaparelli she downsized and fled to New York, working for some time as a nurse’s aid for the American Red Cross, but the tastes of a post-war climate were a death knell for her and she eventually shut up shop in 1954. More recently, however, renewed interest in the brand has spawned retrospective exhibitions at the Philadelphia Museum of Art (2003), the Metropolitan Museum of Art (2012), and just last year at the Dalí Museum in St. Petersburg, Florida. Finally, the 2006 acquisition of the brand’s archives and rights by Diego Della Valle (better known as the CEO of luxury-dad footwear company Tod’s) led the French Ministry of Industry and the Fashion Federation to restore Maison Schiaparelli to official Haute Couture status last year.

The revival has been underwhelming: too many competing colours and textures, no original silhouettes, and gown after listless gown of desiccated frippery fit only for the Kate Bosworths of this world. Schiaparelli – who loved to shock so much she named an autobiography, a perfume, and a signature pink after the word – would have amethrowered the howling lot. It’s been exciting to watch iconoclasts Demna Gvasalia, Alessandro Michele, and Raf Simons shake up Balenciaga, Gucci, and Calvin Klein respectively and it would be so fitting now if a similar candidate was found for Schiaparelli to thrill again.