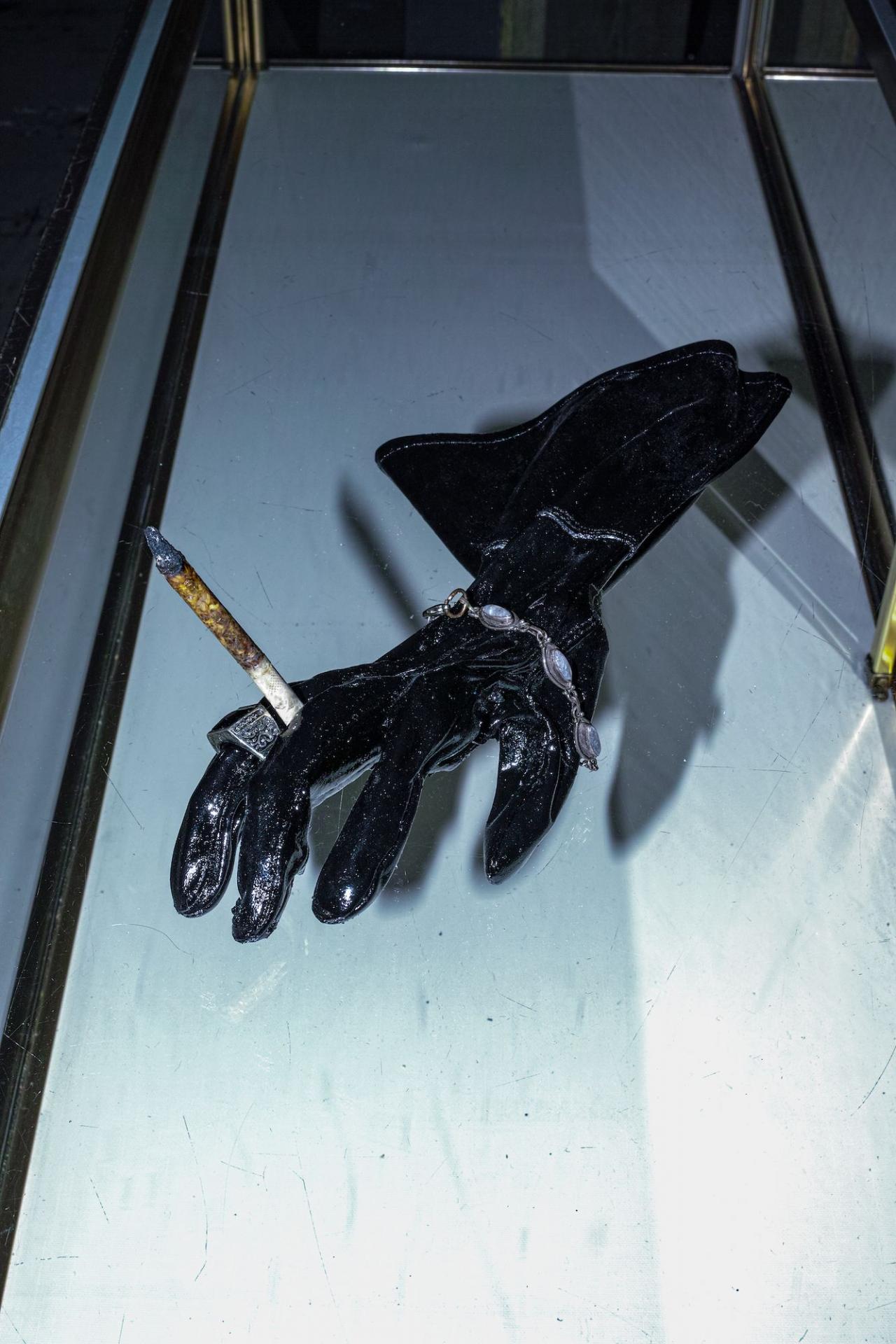 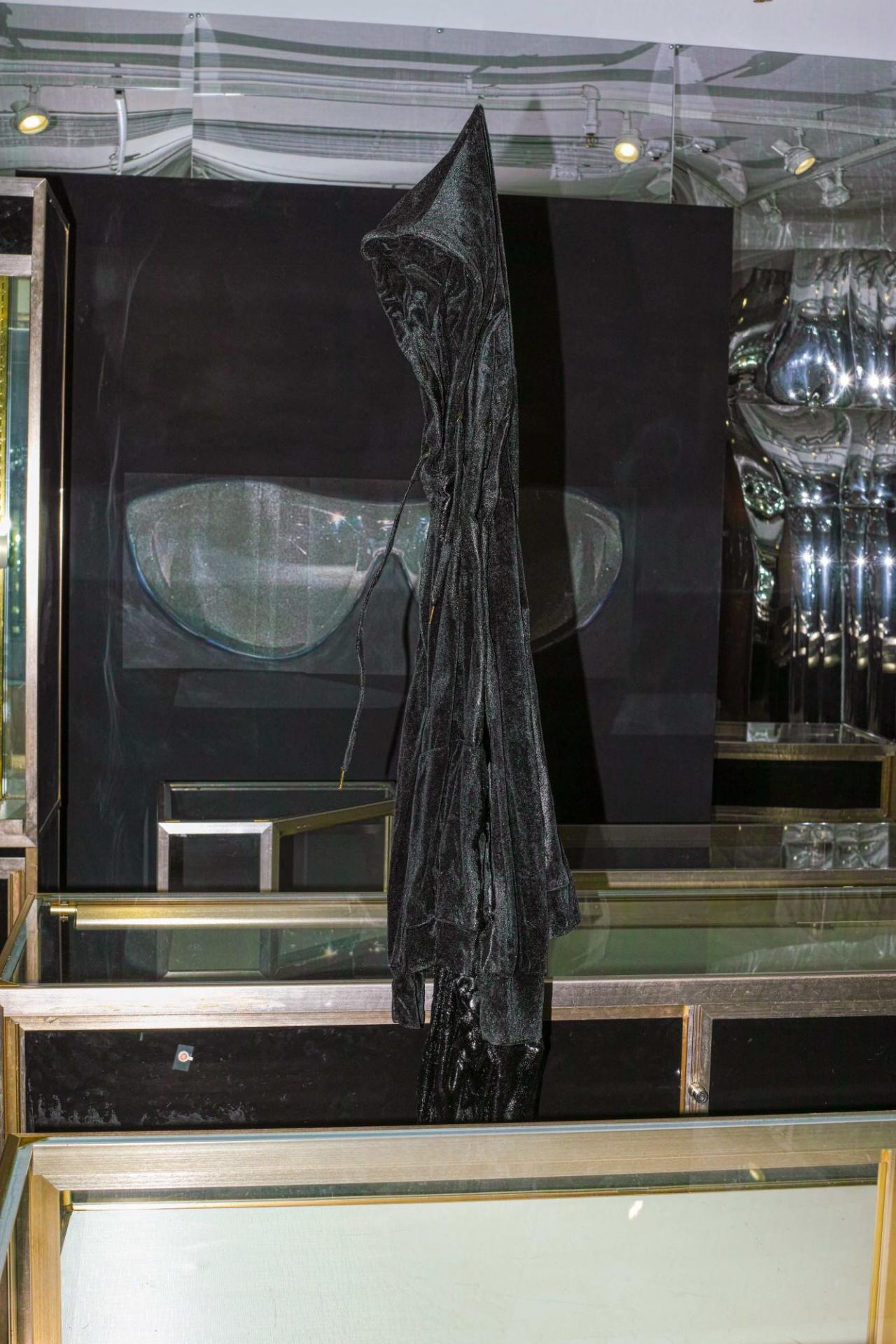 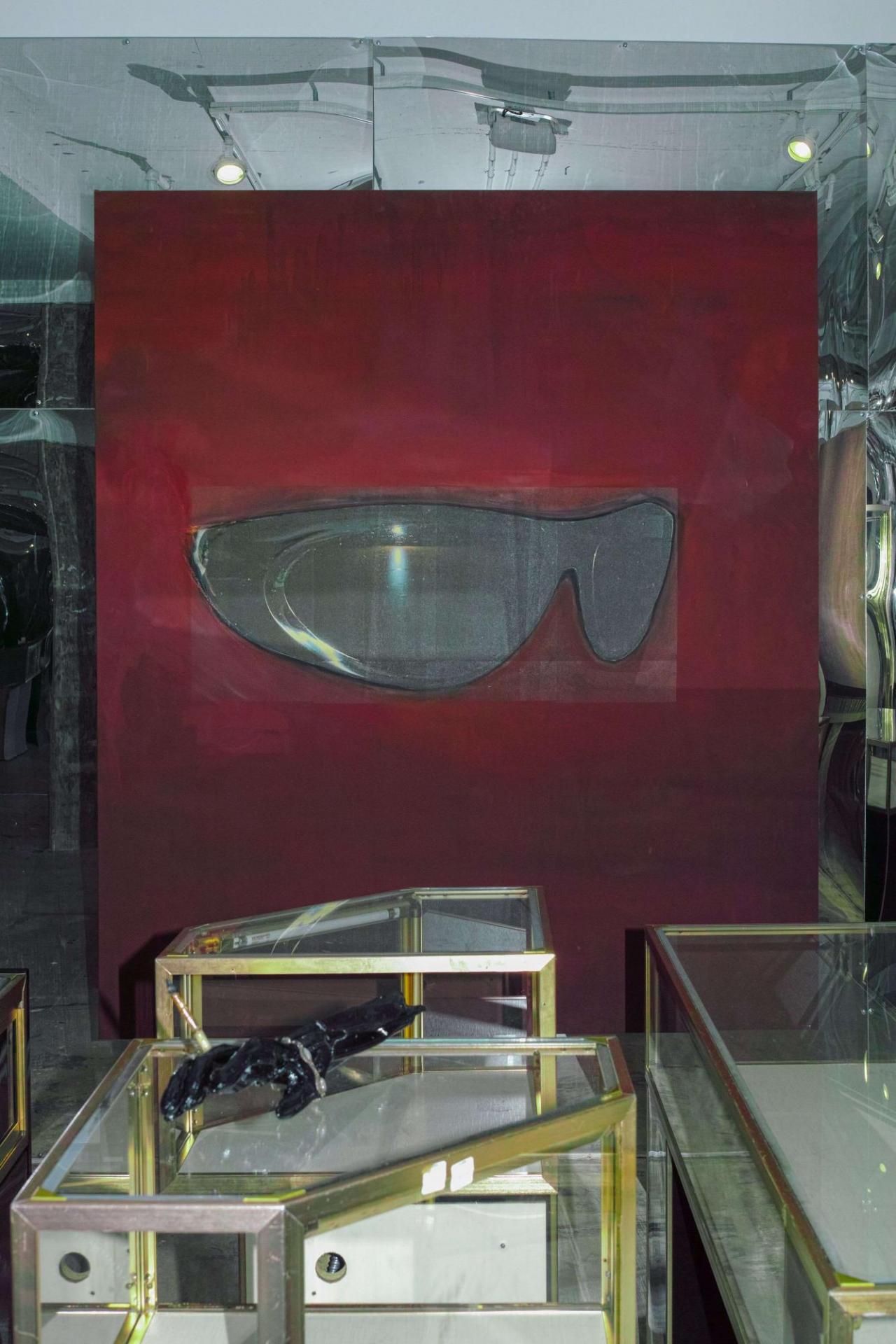 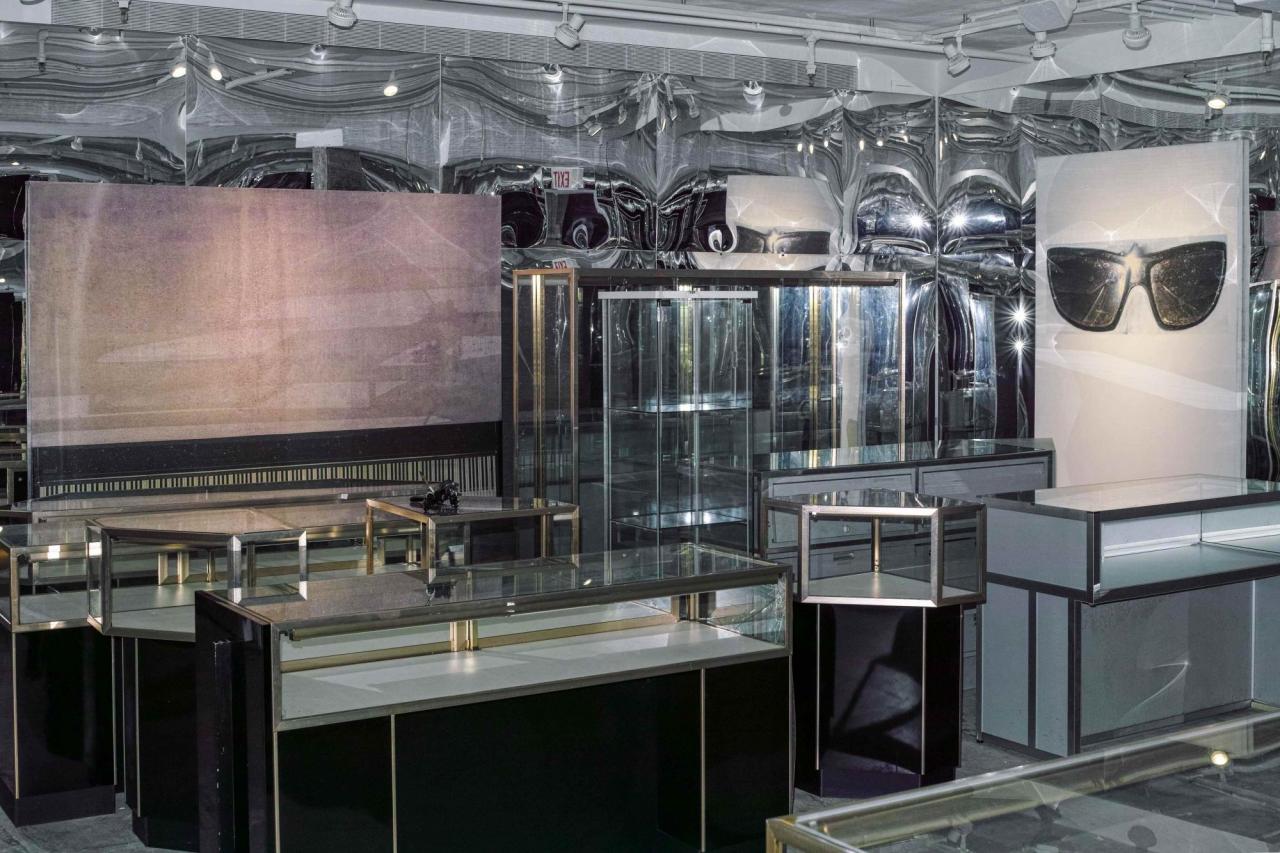 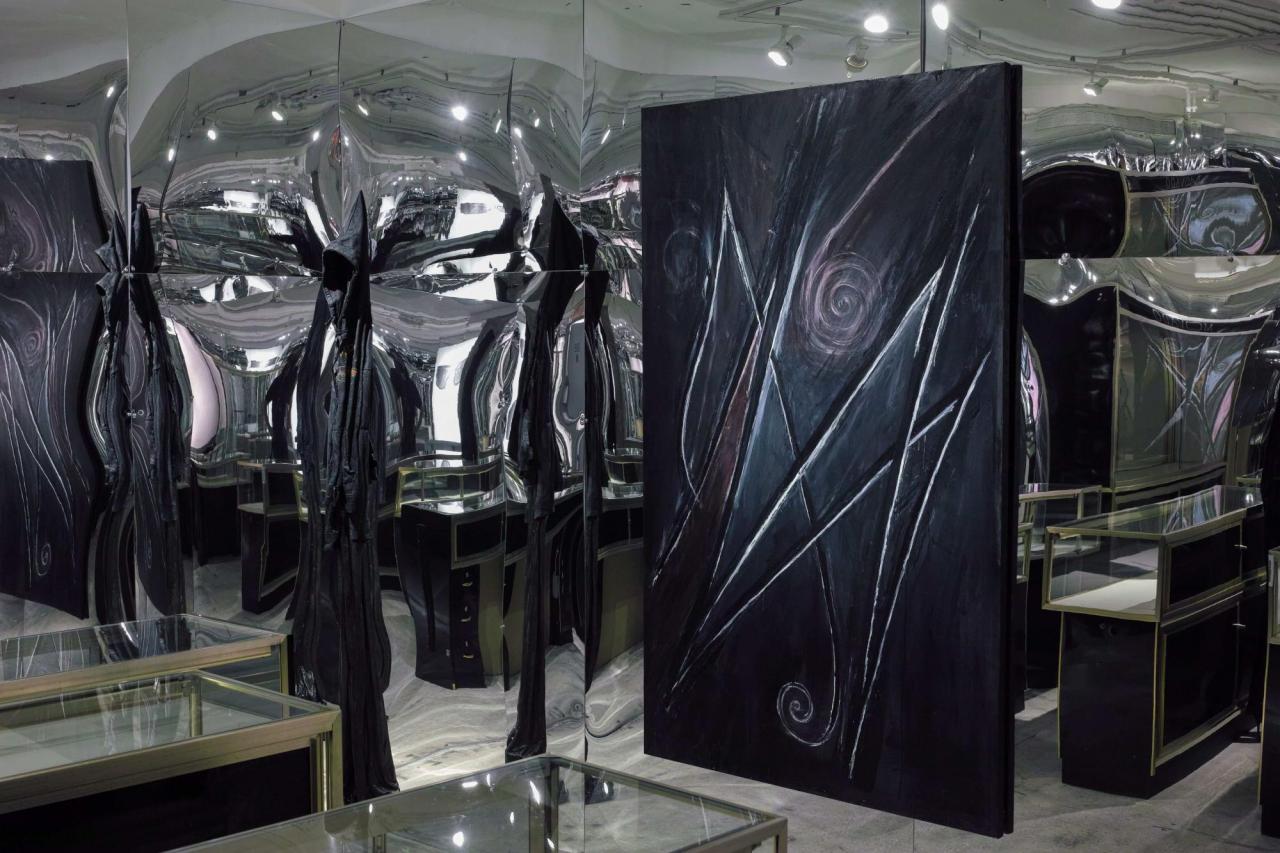 Tobias Spichtig makes art that simultaneously haunts and charms. The man himself is similar, with a dark, goth aesthetic that cloaks an incredibly sweet nature. The first week of September 2021, I arrived at Swiss Institute while Tobias was installing his first institutional solo exhibition in the US, “Good OK Great Fantastic Perfect Grand Thank You”. I surveyed the large room filled with antique vitrines from department stores, intricate abstract paintings and grotesquely thin mannequin-like sculptures modelling resin coated garments. In the mirrored walls, these artworks were reflected and refracted in infinite, nebulous amalgams. The emptiness of the exhibition stayed with me. Later, I read about Yves Klein’s 1958 exhibition titled “The Void”, which also featured an empty vitrine. Klein, invoking Eugène Delacroix, said about the exhibition: “I sought to create an ambience, a pictorial climate that is invisible but present, in the spirit of what Delacroix referred to as the indefinable, which he considered to be the very essence of painting”. Carl Jung said everything known and empty is filled with psychological projection. Visiting the show again after the mayhem of Paris Fashion Week, I recognized what was mirrored back in the void. It was my own darkness.

Jordan Richman: Tobi, how did you start making art?

Tobias Spichtig: I don't know, really. I was drawing and making clothes as a kid and I wanted to get into a theatre school or a music school, but I didn’t. So I got a job as a flight attendant. Then I studied at the Norwegian Theatre Academy, where Robert Wilson taught as well. But Norway was too lonely, so I went back to art school.

JR: Interesting, because, you know Simon Castets [the director of Swiss Institute] was also a flight attendant?

TS: Yeah, I know. That's our joke. I think we were during the same time, actually.

JR: But you didn't cross paths in the sky?

TS: No, we didn’t, unfortunately. We worked for different airlines. So hard to tell if we did. (laughing)

JR: Anything important you learned as a flight attendant?

TS: That there’s a business class? I grew up in the countryside of Switzerland. So it was nice to be in London or Istanbul every weekend to go clubbing, which I could not afford to do otherwise. And I saw all the exhibitions and museums in every city. That’s all I did.

TS: Not really (laughing). Or if it was, then only in the opposite direction. I think only on a level of this kind of absurdity, like how he treats all elements the same. I’m not a huge fan of his approach, because I think it has a tendency to flatten things. Not everything can be treated the same, I think – quite the opposite. I like the way Heiner Müller talked about material. He called it “Aufenthalt im Material” (something like a sojourn in the material), which for him meant something being there, thinking about where the things come from and what stuff you use. I use physical material – images, music, etc. – like how comedians call their jokes “material”; and you can’t really treat every joke the same way.

JR: Did you make performance work then?

TS: No. I mean, yes, but I’m more into theatre or music. I look at performance more from a theatrical perspective. Though I do have what could be a performance piece, which I want to continue, where I play piano and sing cover songs. I would sing any song that I wanted, in a minimalist setting so the focus would just be on the songs. Not a concert setting, just the songs. My big love Theresa Patszchke would accompany me on the piano, since I don’t play the piano well enough to sing and play at the same time. It started because I like singing and then I had opera training for a while in my early 20s. So it made sense to sing songs. Just to sing them. One of the sets was: “This is My Life” by Shirley Bassey, “Die böse Farbe” by Schubert, “Bohemian Rhapsody” by Freddie Mercury, and “It’s Raining Today” by Scott Walker. But I guess it’s all the same, as long as it’s good. My ideal retirement plan would be to work as a bar pianist or play the piano in a nice hotel lobby.

TS: The abstract paintings are somewhere between ornaments, writing, and perspective collapse. They look like something, but you can’t really tell what, exactly. And I guess that’s what abstract painting is. The “sunglasses” are sunglasses on deep shades of colour. They are paintings of Sunglasses. They depict models that I like photographed in the dark with a flash, printed, and partly painted again with a mostly monochrome background. The sunglasses almost look like they are gazing at something. They’re like objects as portraits. I kind of wish to be an object all the time – maybe that’s why I like them. The figurative sculptures are just empty clothes standing around, so the empty thing becomes a character in and of itself, and vice versa. Empty Vitrines (2021) is a sculpture of empty vitrines that are no longer used, so they have this beautiful presence of their own – like a cityscape, or furniture for nothing. And the mirrors were originally intended as a floor sculpture but on the wall, so they function as the frame for the paintings, and further, as the frame for the show – both as an architectural ornament and frame, like white walls generally do.

JR: In mysticism and religion, the void is a state of pure consciousness in which the mind has been emptied of all particular objects and images. I think the installation you’ve created, with its play of gazes among mirrors, shields, and obstacles represents the void. Do you think of the exhibition as a meditation?

TS: I meditate a lot, and yes, maybe exhibitions are like meditations. There’s always a void – but that’s where things appear, like thoughts and stories.

JR: What does your art reflect?

TS: Hard question. I would say the now but then again; maybe also whatever one likes to see, and everything else. It’s important that things have a presence of their own, so the mind can wander.

JR: The medieval German theologian Nicholas of Cusa’s theory of divine and limited perspectives informed this exhibition, right? Can you explain it?

TS: I think even he couldn’t really explain what he meant, exactly. Or at least I’m not fully able to grasp what he’s saying. I just love the medieval language, the way thinking was structured. It’s somehow refreshing to read these old thoughts to think about my surroundings now. Nothing seems to have changed. It’s all about the mind, control, anxiety, and relief. Cusa’s perspective is basically a love letter to paintings or images in general. He talks about how the painting looks back at the viewer, and vice versa, and how there’s a sense of peace in this uncanny situation. After reading that, it made sense to paint sunglasses.

JR: There is so much to be haunted by, in your show and in society. What are the ghost-sculptures remnants of?

TS: It started when friends left their clothes after a party or my own clothes laying around. I wanted to make figurative sculptures and the easiest way to get the proportions right was with clothes. Also, when clothes lie around, they sometimes look like people sleeping on the floor in random places. So I started to fix them in resin and they looked like ghosts. But they still had material presence and the looks of people.

JR: The last time I saw the ghost, it was in a Balenciaga shop. During the pandemic, many of the shops shuttered, and they themselves kind of became ghosts. Are the second hand displays also haunted?

TS: I guess every object is haunted by its imposed meaning. The vitrines come from a series of sculptures, which started with mattresses, then tables, then fridges and sofas. These pieces were basically a walk through the apartment during a sleepless night. They become something else when there’s a lot of them. So the vitrines might be a more of a shopping spree. The last time I was in New York, a dear friend of mine took me to the diamond district and I loved that trip. These empty vitrines have a very special feeling to them.  It's also because they're very, very specific piece of furniture. As an object, a vitrine is actually quite useless. It's a lot of a lot of material for not so much, but its function makes it important.

JR: Now from shop vitrines to the high fashion métiers.  In July, I went to the couture collections in Paris for the first time. I was impressed by some of the craftsmanship and technique at houses like Balenciaga…

JR: What inspires you from haute couture?

TS: I mean, it's just beautiful. It has this ornamental aspect, which I think is quite anti-modern. It's not postmodern, and it's really not modern. It's very important for couture not to be mass functional, for it not to make sense. I think haute couture doesn’t make sense in an optimised world, and I like that.

JR: Cristobal Balenciaga was a devout Catholic, and the religious influence is clear across his work. Does Catholicism enter your work?

TS: And so was Andy Warhol. I don’t care about religions or other ideologies, but by being born into this club, I guess I am a Catholic, and sometimes I even like it. I just grew up in that environment, and I think you can’t ever completely escape the culture you grew up in. That weird and super problematic organization still has the best art collection. In the end it can be freeing once you realize where things come from, because then it’s okay not to have to know exactly where they have to go.

JORDAN RICHMAN is an art director and writer based between Los Angeles, New York, and Berlin. 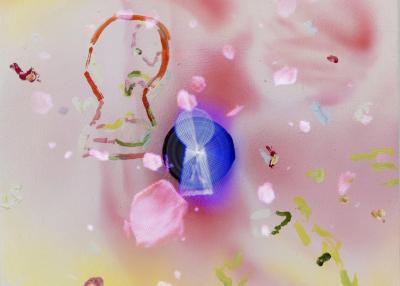 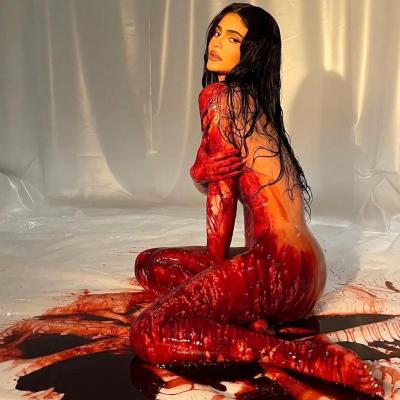 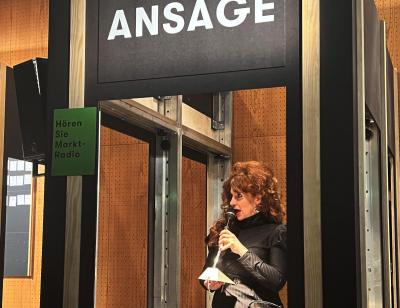