We Are Speaking To Existence 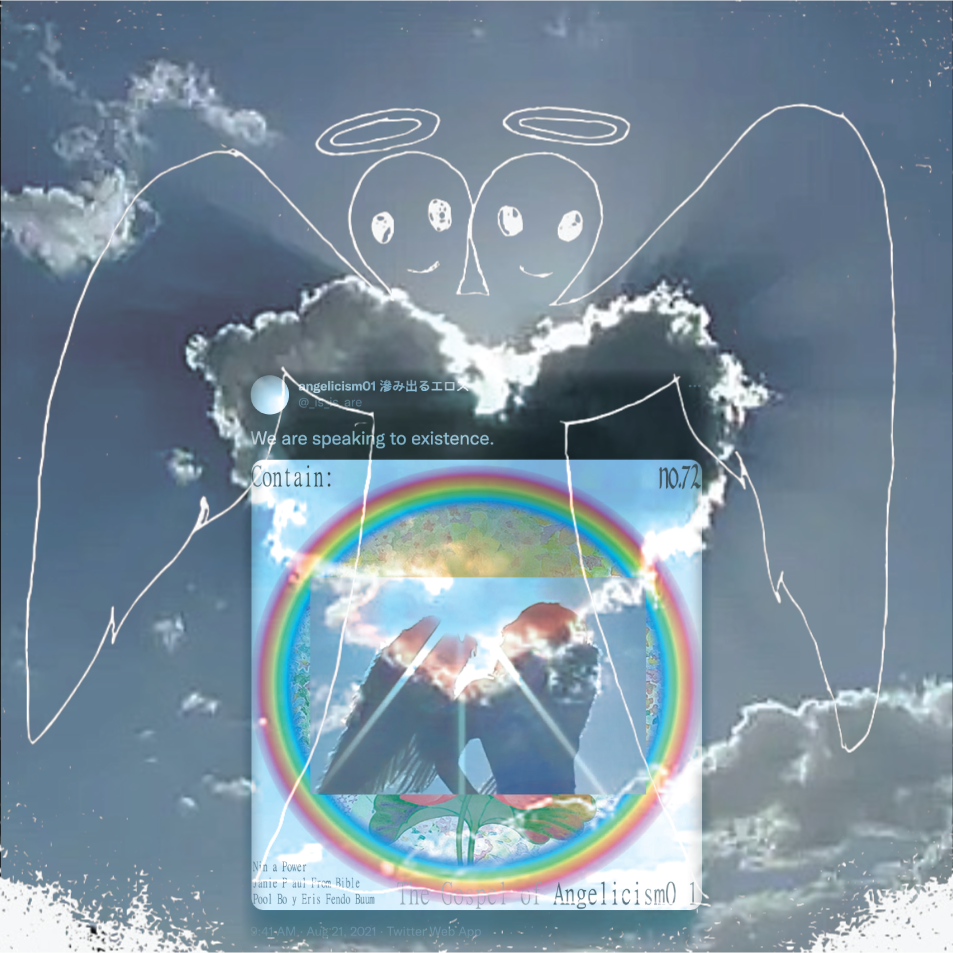 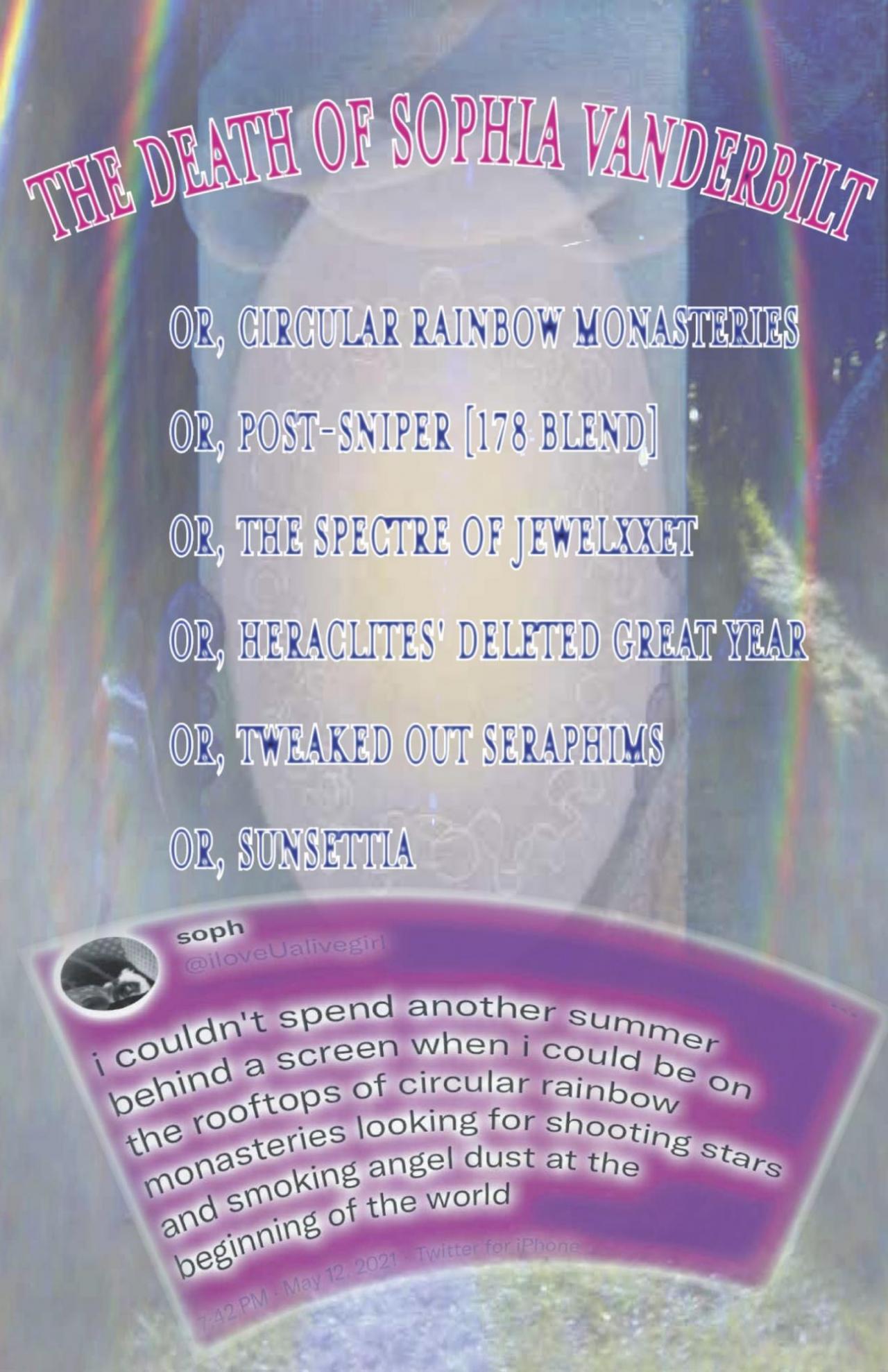 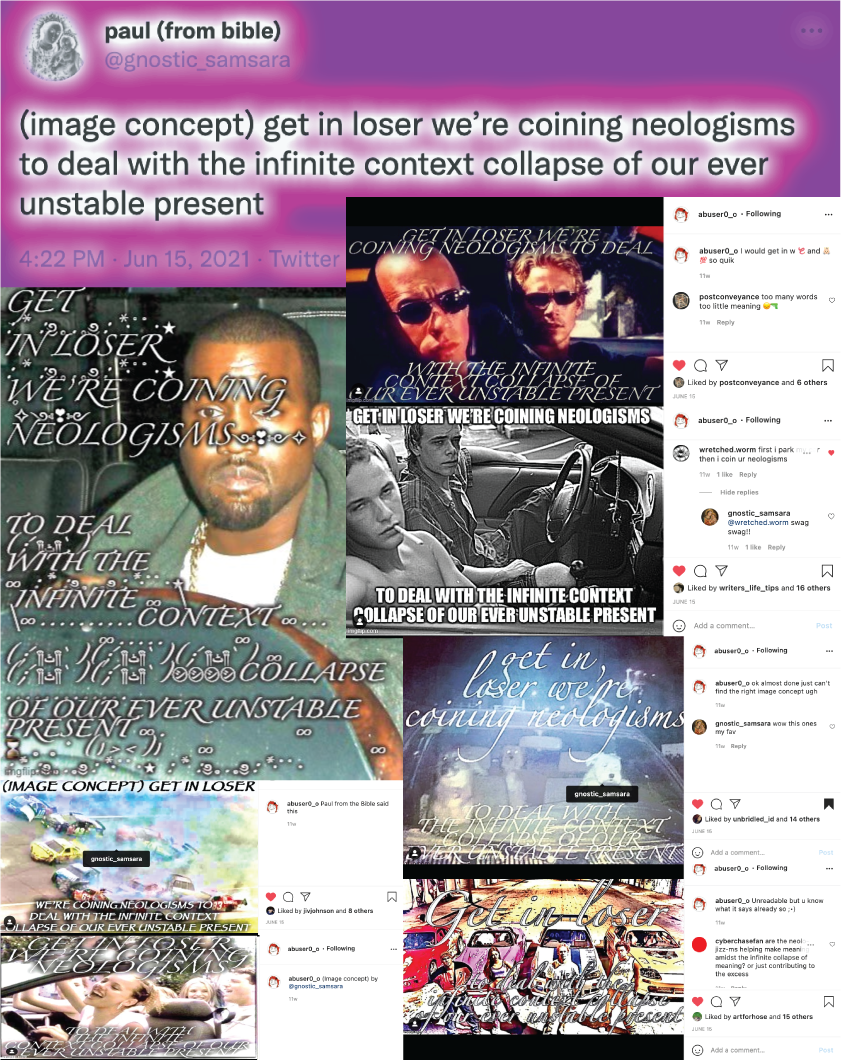 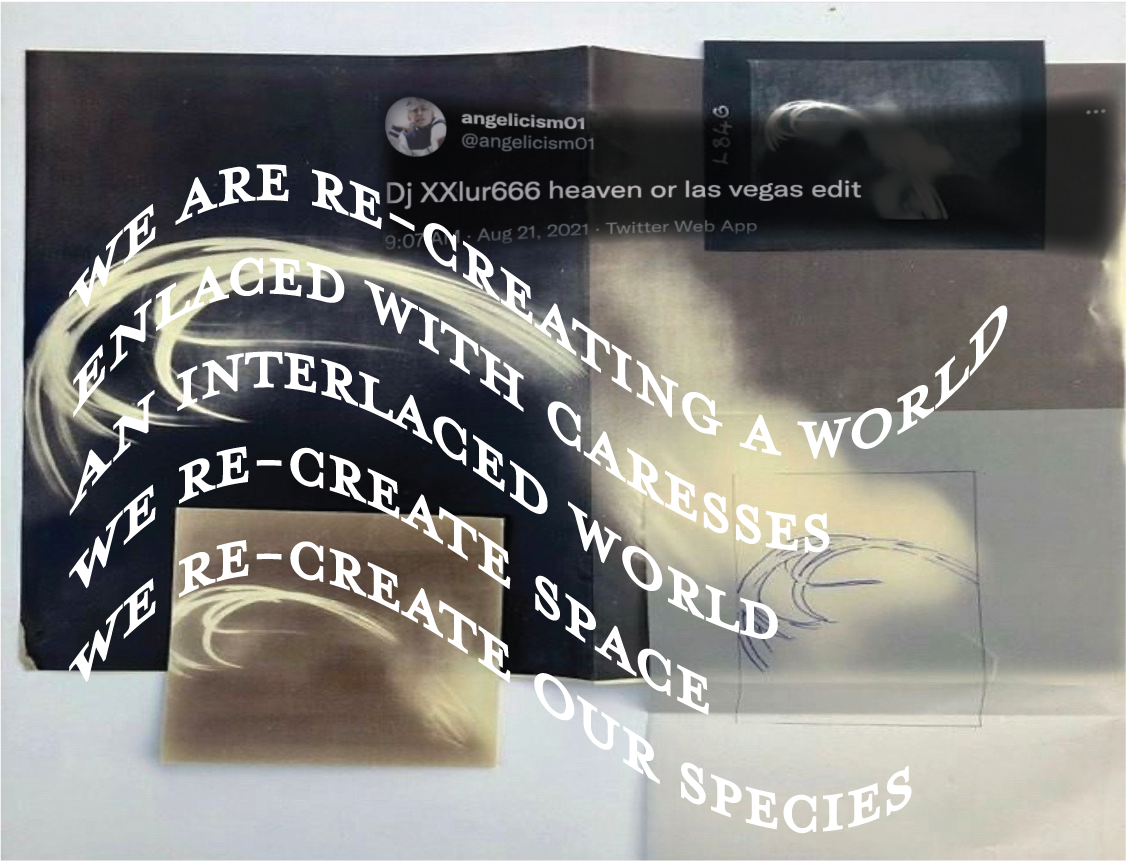 Substack bloggers, Soundcloud rappers, and podcasters cull transient strangeness from the corners of the internet in a new kind of archive, epitomised by the entity that calls itself Angelicism01. Satya Paul, a veteran of the scene, reports from the field.

Summer 2021 was “The Summer in Front of a Screen”. The phrase, which has transformed into a meme, takes its genesis from Cat Marnell, quoted in Page Six circa 2012 about her refusal to sit at her laptop and work, preferring, instead, to be “on the rooftop of Le Bain looking for shooting stars and smoking angel dust”. Another young writer (slash Wet Brain podcast host) Honor Levy picked it back up in May 2020, tweeting: “I can’t spend another summer having meetings on Zoom behind a computer at night when I could be…”. The sentiment eventually mutated into an open-ended copypasta, splashed across a number of tweets and Instagram stories – many of which have now been lost to deletion or account deactivation, condemned to float somewhere in metadata archives, though traces still remain.

I spent the Summer in Front of a Screen DM’ing with the entity best known as Angelicism01. It’s best known as a Substack blog housed at cashedcobrazhousewriter.substack.com (The enigmatic URL is a reference to the producer tag of Soundcloud artist Hi-C, formerly a member of the cult rap group Reptilian Club Boyz, which disbanded in 2021 after finally succumbing to an onslaught of allegations ranging from scamming to grooming to sexual assault.) but maintains a presence across a number of social media platforms. One night, Angelicism01 tells me about a screen recording of an Instagram livestream by Summrs – one of the most prominent Soundcloud rappers of an emerging generation, boasting millions of plays on the platform and hundreds of thousands of followers on IG. In the stream, Summrs was high on lean, talking into his phone camera, slurring out the words through opioid-bated breath: “We’re speaking to existence.”

The phrase would soon reemerge elsewhere in this scene. Angelicism01 used it – “we are speaking to existence” – in a tweet on August 21st, sharing a link to an episode of the Contain podcast titled “The Gospel According to Angelicism01”. Contain’s host, Barrett Avner, convened guests over the course of four and a half hours to discuss the enigmatic blogger’s work. Like much of the content in our transient feeds, this tweet was lost, but a screenshot of it remains, archived in a Substack newsletter from the same cultural sphere: paul (from bible)’s The River. In an image embedded in the dispatch, the tweet was collaged over a heart-shaped cloud and a sketch of a two-headed angel drawn by Avner, then re-inserted into the stream of the essay between a quotation from 1 Corinthians 14:10 and a fragment of text about searching for angels in Proust’s Sodom and Gomorrah. Interlaced and appropriated, the image is true to the nature of the digital sphere it functions within.

This seemingly disparate corpus of Substack writers, independent podcasters, and Soundcloud rappers are linked by the way they stratify image, sound, text, and video across social media platforms. It is a methodology of world-building and self-mythologization: lore, canons, and meta-narratives begin to develop, all mediated through the screen as networks remix preexisting forms. An essay like Angelicism01’s “My Hypergraphia Is Exploitable But I Refuse to Allow It to Be” pulls together figures from mystics (Simone Weil) to mathematicians (Alexander Grothendieck) to the literary critic Paul de Man, while its title references a track from Berlin-based artist bod [包家巷]. French curator Nicholas Bourriaud writes that, in the era of post-production, the name is detached from the individual – “More than a physical person, a name now designates a mode of appearance of production, a line, a fiction.” Constituting itself through multiple accounts and entities, Angelicism01 epitomizes this line of thought – morphing, as it has since the moment of its mysterious appearance on the internet, from a single individual’s output into a signature and a brand.

One need look no further for other examples of Bourriaud’s point than the design ethos of the late Virgil Abloh, who famously said that all that it took to make something new was a 3% change from existing material – citing Picasso’s African period, J-Dilla, and hip-hop, all sampling the readymade in order to make anew. Abloh saw the act of screen-printing Caravaggio’s Boy Bitten By A Lizard onto an OFF-WHITE hoodie as one of preservation, of reintroducing a work from the past into new cultural contexts. His philosophy of appropriation echoes Bourriaud’s with eerie precision: “To rewrite modernity is the historical task of this early twenty-first century: not to start at zero or find oneself encumbered by the store-house of history, but to inventory and select, to use and download.” Rather than limiting himself strictly to contemporary art, Abloh recognized that the lines between disciplines were increasingly blurred, an insight he epitomized when he remixed Migos’s “T-Shirt” with Aphex Twin’s “Lichen” during a 2017 lecture, titled “Everything In Quotes”, at, fittingly, Columbia University’s Graduate School of Architecture, Planning and Preservation.

Methods like Abloh’s and Angelicism’s are central to our preservation of cultural objects as they increasingly shift from physical to digital. Take Kanye West’s recent Instagram feed: posts go up and come down in a matter of days, sometimes hours, just as years of his writing on the Kanye University blog are only available through the Internet Archive’s Wayback Machine, with much lost. Angelicism01’s Substack and YouTube output did critical archival work during The Summer In Front Of A Screen, sharing online ephemera like a recording of a 24-minute long Instagram Story by Honor Levy alongside an essay called “Kanye Might Have Stayed Quiet Like A Dot In The Snow When The Whole World Came Knocking”. The “About” section of Angelicism01’s Substack reads: “Subscribe now for the theoretical gossip of the 21st century”. Sean Monahan tweeted that “Angelicism01 is way better than gossip girl”. The television show, the Substack, and social media posts are ontologically flattened in the Summer In Front Of A Screen, all streamed directly into our devices.

These interlaced worlds, whether in the sonic spaces of Soundcloud or the burgeoning literary scenes of Substack, are where new language and concepts evolve out of the surfeit of material, languishing in the depths of the internet, we’ve been left with.

The Czech-born media theorist Vilém Flusser, who gave us the notion of “technical images” – images that, like the flattening of information through the screen, disrupt the systems that give the West its linear conception of history – claimed that “it will become pointless to try to distinguish between music and so-called visual arts because everyone will be a composer, will make images.” Our rapid shifts in technics are leading us into this reality. On his most recent release, Foreign Exchange (2021), the currently-incarcerated rapper Rx Papi snarls, “They say I paint the picture so vivid – N**** this not a picture I’m trying to paint, I’m trying to tell you how the fuck I’m living.” Another one of Rx Papi’s popular songs, “Therapy Session”, is 18 minutes long and best described as operatic. Gritty drums with a sparse piano loop compose a regional DMV (D.C.-Maryland-Virginia) style beat that repeats while the rapper stretches the medium’s formal scope, making history while dropping sometimes-hilarious, sometimes-heartbreaking quotables that reflect the realities of America’s opioid epidemic, carceral state, and systemic poverty.

Outside the limitations of the music industry (or the publishing industry), Rx Papi is able to put out an 18-minute opus, acknowledging this in the work itself, saying things like, “They like, ‘Pap, how many time you loop the beat?’ As long as I fuckin’ want to speak” as he makes rap history. In the same vein, Angelicism01 was able to release their similarly-sprawling eleven part essay “The End Of The Universe”, a journey through Vibe Shifts and Hannah Emerson, Greta Thunberg and Antigone. On both Soundcloud and Substack, the platforms themselves engender the culture they put out, by providing artists and writers with digital tools for low-overhead self-publishing on a globalised scale. They create digital spaces for individuals with niche aesthetic interests to coalesce into strangely ubiquitous, far-reaching scenes.

In South Florida, there is a culture of “Fast Music”, in which rap songs from that region are sped up to a higher BPM in order to be played alongside fast-paced Miami bass in Broward County clubs. These “fast mixes” generally emerge within a day of a song’s release in its original form – the cloning and multiplicity of sounds has become a part of the sonic landscape there. It’s hyperlocal, yet the local has been digitized. Oceans away, in the Philippines, electronic musician monker178 can remix “Oracle” (an acapella track where Kodak Black meditates on his recent pardon from prison and the plight of those still serving time) and release it, accompanied by found-footage visuals, within a day. The work, titled Sniper [178 BLEND], which featured on Angelicism01’s “Acultural 100” list at the end of 2021, illustrates just what can emerge from these platforms of post-production.

In a 2018 Late Night interview, Seth Meyers asked Kanye West if there was any difference between his processes for designing music and designing clothing, to which Kanye responded: everything in the world is exactly the same. A captioned screenshot of the moment took on a life of its own. Isolated, the phrase suggests that the world is in fact static; that technics are what change, and, through technics, culture. In his essay “The River”, a compendium of different “Rivers” from across cinema, literature, and music, Substack blogger paul (from bible) cites the on-screen text of a 2001 Houellebecq short film of the same name, reading: “WE ARE RE-CREATING A WORLD // ENLACED WITH CARESSES // AN INTERLACED WORLD // WE RE-CREATE SPACE // WE RE-CREATE OUR SPECIES”. These online, interlaced worlds, whether in the sonic spaces of Soundcloud or the burgeoning literary scenes of Substack, are the direction in which our technologies are leading us, where new language and concepts can form and evolve out of the surfeit of material, languishing in the depths of the internet, we’ve been left with (and in turn, keep piling onto). These worlds will only continue to grow, in reach and in influence, over time – if only because there is simply nothing stopping them. In Front Of A Screen, We Are Speaking To Existence.

SATYA PAUL is a writer and artist whose forthcoming book The Godsip According To… will be available through Not Nothing. He moonlights on Substack, maintaining the blog False Profits.

Angelicism01 and paul (from bible), the death of sophia vanderbilt (2021)