&ldquo;Art of Prehistoric Times. Rock Paintings from the Frobenius Collection&rdquo; at the Martin-Gropius-Bau 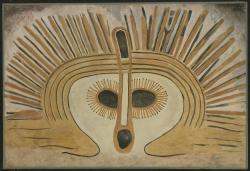 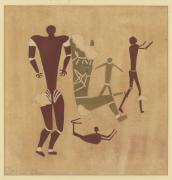 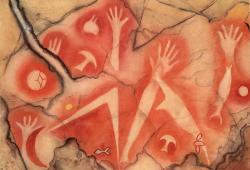 This show convenes drawn documentation of prehistoric art from the collection of the German ethnologist Leo Frobenius (1873–1938), who traveled the world with a team of skilled artists who drew and painted facsimiles of rock art found mostly in caves. For decades, these pictures served as the only color documentation of this cave art, much of which has since been destroyed.

The collection grew to around 5,000 works and was primarily completed by young women artists squirming around difficult to access caves and making these life-sized replicas by lamplight. The exhibition features remarkable photographs of the women on these excursions, dressed in early-20th-century desert garb and painting on easels against the dramatic backdrops of caves and deserts.

Frobenius gave his crew zero artistic license and insisted on staying as true to the originals as possible. The collection was brought to MoMA by Alfred H. Barr, Jr. in 1937, just a few years after the museum’s opening, and subsequently toured the US. Admittedly, it is di cult to imagine a time in which these drawings would be considered revelational. Their merit as replicas is pretty bad, and if considered as autonomous paintings, they’re deplorable. They are fetish objects that bear the trace of the herculean effort of this collector and his cohort to bring the wonders of cave art to the public. Yet they are also a document of a time before color photography, and beg one to consider how far we’ve come in terms of imaging technology.

One can’t help but think about the problematic ideology underlying the role of the colonial white Western ethnologist in disseminating prehistoric, African, and aboriginal art – an issue the exhibition skirted. In a vitrine, there were hints of awareness in the form of a letter from the Dambimangari Aboriginal Corporation, which gave permission to show facsimiles from the Dambimangari Determination Area. It would’ve been both fascinating and socially progressive to connect this collection to the broader sociopolitical tendencies of its age and how these currents have faded or persisted in contemporary art and culture.

Karen Archey is a critic and curator based in Berlin.—

Subscribe
Newsletter
© 2022 Spike Art Quarterly
Views
3. 5. 2016
“Art of Prehistoric Times. Rock Paintings from the Frobenius Collection” at the Martin-Gropius-Bau
Overview
Back to Top