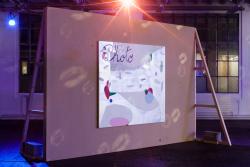 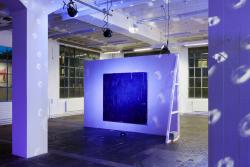 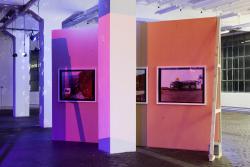 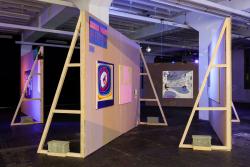 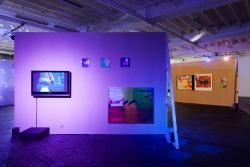 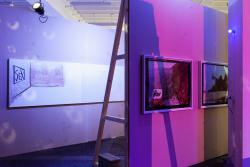 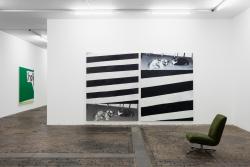 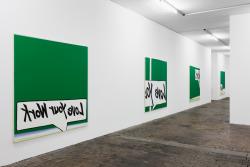 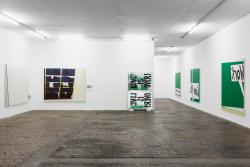 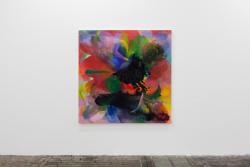 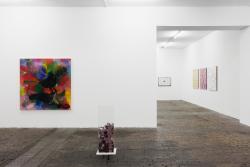 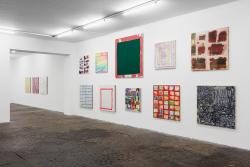 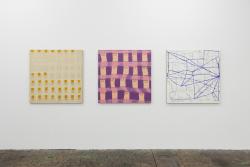 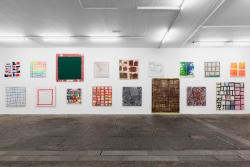 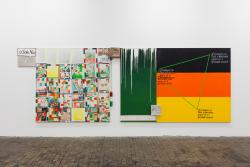 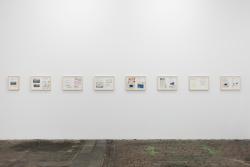 You’d really like to say you loved this show – because you did, I sure did – but now you’re afraid to say it. Because Rochelle Feinstein turned your judgment into a punchline before you could even open your mouth. In the first exhibition room, six canvases from her series Love Vibe (1999–2014) are lined up; standing out in a sequence of luscious green colour fields, the sentence LOVE YOUR WORK (or fragments of it) is inserted into a comic speech bubble and reversed as if in a mirror. The painting is the message and vice versa. If humour acts in the gaps between abstract ideas and real things, the artist makes viewers both laugh and doubt, questioning what kind of painterly “work” they are looking at, and their own ability to describe it. It’s a perfect start. This retrospective (which will travel to Lenbachhaus in Munich, Kestnergesellschaft in Hannover, and the Bronx Museum in New York), with over 70 works from 1989 onwards, testifies to Feinstein’s perpetual questioning of abstraction and language, as well as abstract painting as a language – loaded with its own history, canons, clichés, omissions, and in dire need of deconstruction. With a deflating chuckle, whenever possible.

New York-born (*1947) and based, Feinstein clearly knows a thing or two about “the advantages of being a woman artist” and she is not so keen on playing nice. In Anticipation of Women’s History Month (2013), the work that lends the exhibition its title, is an exercise in tongue-in-cheekness: on the surface of a colourfully seductive Ab-Ex painting with a luminous palette that recalls Helen Frankenthaler, she inserted pins and buttons for Women’s History Month, as if women (and women artists) were granted only a sporadic right to celebration. Another telling work is the installation Today in History (2013), which features a moss-green velvet armchair in front of a large diptych: two digital prints on vinyl of the artist’s cats are juxtaposed with two oil paintings of black and white diagonal stripes – symbols of the quintessential, but also non-descript, “abstract” oeuvre, emptied of art-historical weight. The cat photos vary in cropping and definition (one was produced from a negative, the other from a photocopy), the stripes vary in width, and their blacks and whites vary in tone, like with digital filters. Feinstein is obviously playing with the work of art’s endless reproducibility and uncontrollable circulation in the Post-Internet age. At the same time, she also bids farewell to canonical art historisation, its aggrandizing rhetoric and implicit gaps.

The works are not presented in chronological order, but grouped as “families” or recursive subjects. All the grid-based paintings – with titles like Same Shit, Different Day (1990) or Grids R Us (1992) – are hung together, salon-style. Curators Tenzing Barshee and Fabrice Stroun emphasise the way Feinstein has constantly steered away from the constraints of style and signature, and highlight her evident sprezzatura, hard-won through a relentless practice and exercise with technique, brushwork, media, structure, and composition. They cleverly mirror the artist’s advocation of her right to recreate, rephrase, and rewrite her own history. At the peak of the financial crisis, Feinstein decided to adopt a retrospective look on her entire production. With A Catalog of the Estate of Rochelle F. (2009–10), a series of ink drawings with which she archived every piece in her storage, she capitalised on her own “assets” instead of producing consumable novelty.

I love your work, Ms Feinstein. —

Barbara Casavecchia is a writer based in Milan.