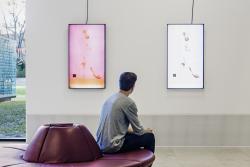 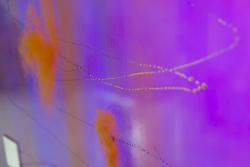 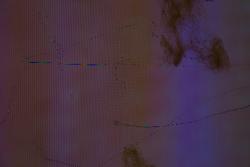 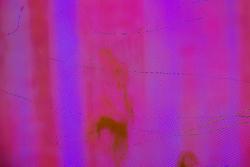 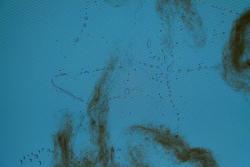 A simple premise often works best in the execution of formal concerns. Over the past couple of years, HD at-screen television works by the American artist Ken Okiishi (*1978) have been circulating in gallery and museum exhibitions. Grounded in Abstract Expressionism, this series – titled gesture/data – considers the conundrum of painting by bringing it in relation to today’s technical resources. The plethora of reproductions of these works on the Web does them no justice and makes them easy to dismiss.

The most recent iterations, shown at the Arbeiterkammer, are called Porous Feedback (2015). Their peculiar anima is both disembodied and tethered to the smooth translucency of the screen. The oil paint gestures and daubs seem to oat across rather than stick to the “underpaintings,” which are running videos culled from shopworn, scratchy VHS tapes of old television shows (newscasts, infomercials) transferred to MP4 or MOV formats, along with some digital broadcasts grafted into the analog footage. The nine paintings on flatscreen monitors hung at the standard level of canvas on stretcher in the foyer/reception area of the bureaucratic Arbeiterkammer – which officially represents the interests of Austrian employees – innocuously blend into their decidedly non–white cube surroundings. Like the nearby rack of workers’ advocacy brochures, or the long reception console and leather seating, they don’t call too much attention to themselves. No one seemed to pay them any mind at all.

Looking like an airport terminal, the Arbeiterkammer’s interior is dominated by tubular poured concrete cross-beam structural supports. In plain view from this communal public space, the cutting edge of 21st-century painting beckons the curious passerby. Colorful staccato rhythms jut along the outer edges in a couple of works with a mirror collaged atop most of the screen. Another hints at neo-geo when the standby blue screen of a VCR diagonally merges and splits, buttressed digitally by a bleeding magenta line and viscous black. Unexpectedly these silent yet ambient updates on Abstract Expressionism have a quiet pull. Is it despite or because of all of the technological apparatus at our disposal that painting keeps getting resuscitated from its own entombment? Taking the painting / technological fissure to its apotheosis, Okiishi has cannily integrated pigment and pixel to construct paintings that surprise you with intangibility. —

Max Henry is a curator and writer based in Vienna.