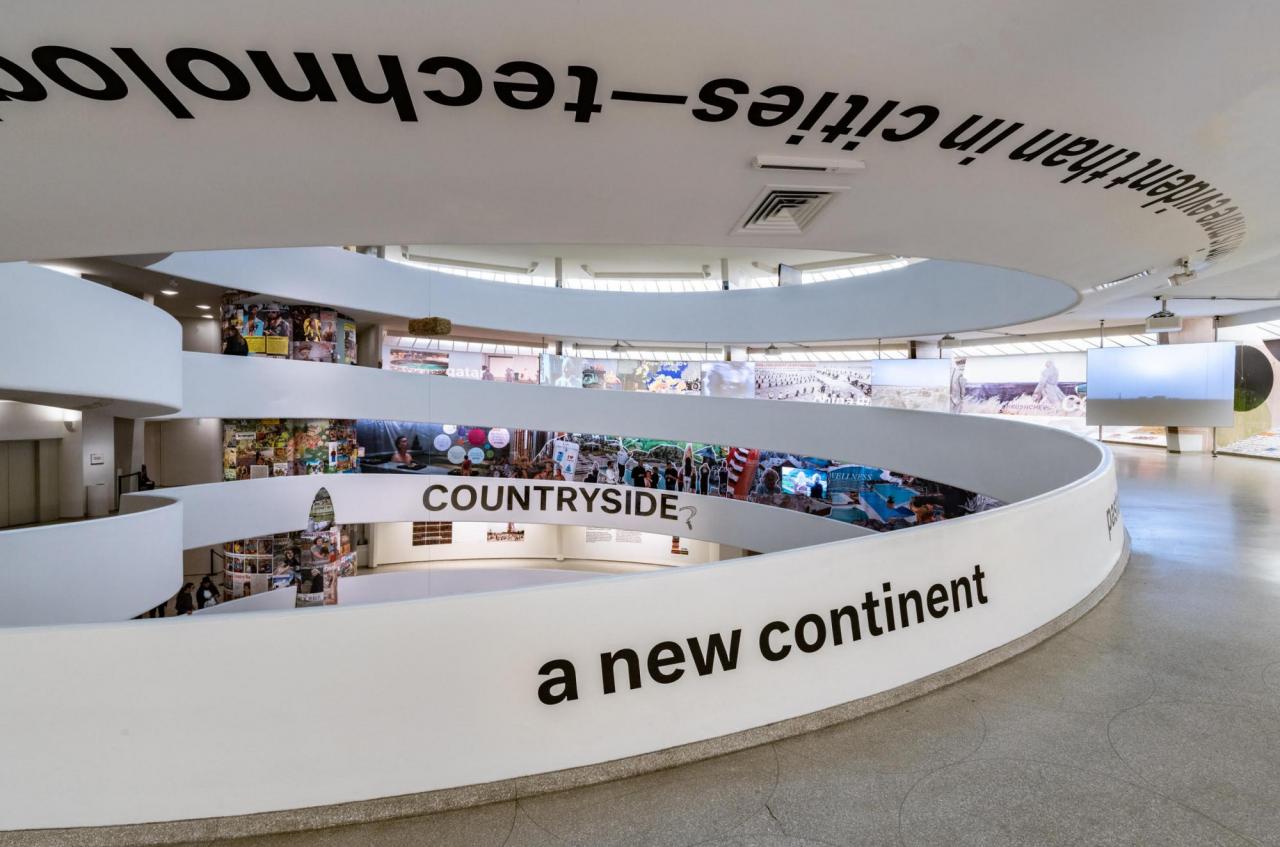 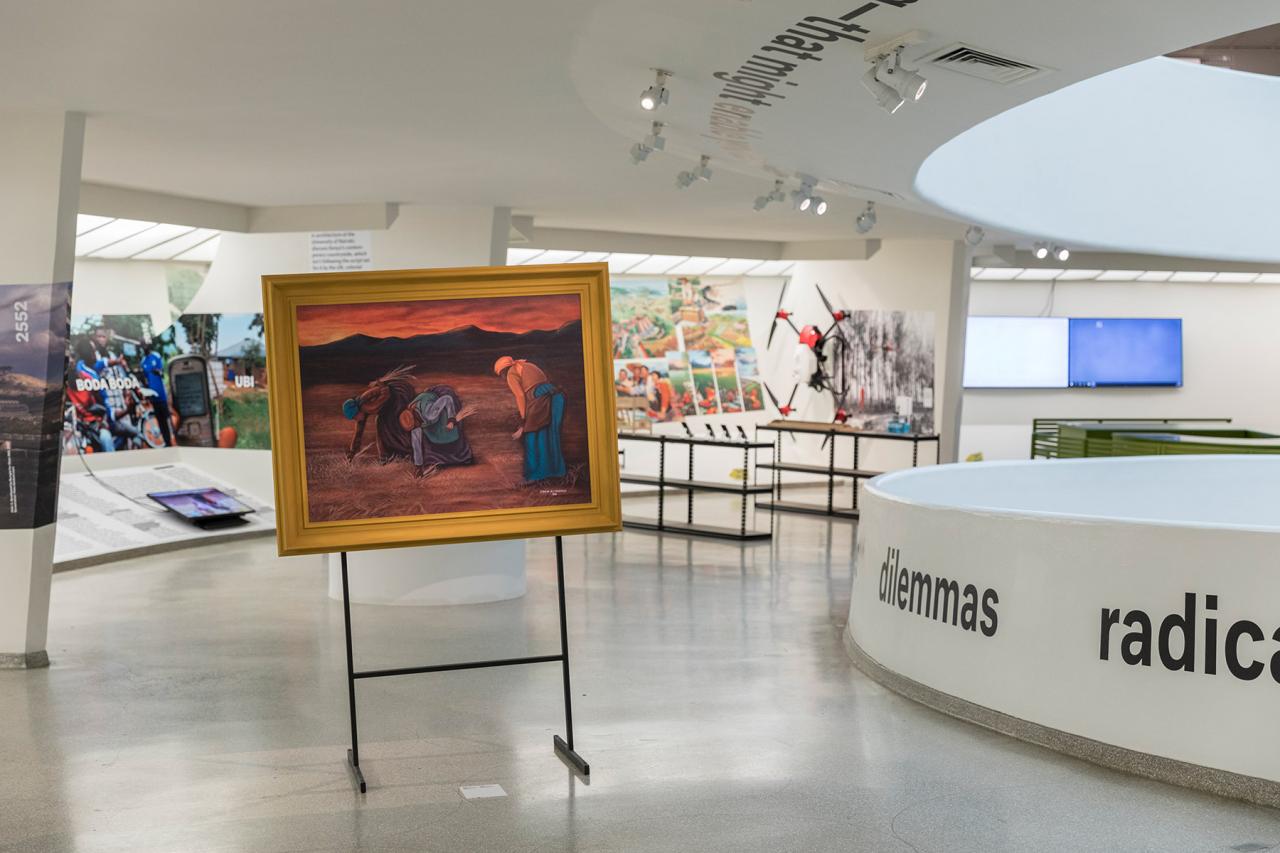 There’s a large tractor parked outside the Guggenheim on 5th Avenue. Across the road is Central Park, which was laid out by Frederick Law Olmsted beginning in the 1850s. The section directly opposite the Guggenheim leads right up to the Jacqueline Kennedy Onassis Reservoir, which can be seen from the café. At the heart of the reservoir, an unusually large Northern Shoveler Vortex has begun rotating backwards; an ominous sign in a city that’s teetering on the brink of a pandemic, and where the Governor has declared a state of emergency. The city feels one step removed from reality; hallucinatory and magical and menacing; touched by both the warm boughs of spring and the coming plague. And if we survive, as we hopefully will, I think we’ll feel a great pleasure in having a second chance at life. Can you imagine what it would feel like, a late summer evening, somewhere far away, in the country, drinking on a terrace, falling in love?

I keep up with the ducks on the reservoir with Manhattan Bird Twitter. On Sunday I strolled around Bryant Park looking, unsuccessfully, for either of the Bryant Park Woodcocks while talking to my mother on the phone about how not to die.

My friends in my group chat are trapped in different countries, but I sense that we’d all like to go home to die; on which note: the countryside.

Rem Koolhaas and Samir Bantal’s show “Countryside, The Future”, organized by Troy Conrad Therrien at the Guggenheim, is a massive collaborative research project about the “countryside”: by which is meant the 98% of the Earth’s surface that’s yet to be covered by cities, towns, or suburbs. The story begins in picturesque Engadin Valley in the Swiss Alps, where Koolhaas has a house. Over the years, his neighbours move away, and local businesses are shuttered, yet the village grows three times larger. How can a place grow so much as it declines, he wonders? The answer is him, and out-of-towners like him, who buy their country houses there.

There’s a small picture of some fellow packing a bundle of cut branches into the boot of his car. “What seemed an authentic Swiss farmer was in fact a dissatisfied nuclear scientist from Frankfurt,” writes Koolhaas. His story has a glum Houellebecqian feel. “Did the Swiss still maintain their countryside? Nothing was what it seemed,” he observes. “The countryside was deeply unstable.” And with that we’re off a journey around the world and across the centuries.

Down here the curving wall’s collaged with illustrations of how the Ancient Romans and Chinese saw the countryside, as an idealized space of creativity and blissful repose, a place for loitering in the shade of a mulberry tree, for lowing herds and soft slumbers, for drinking in succession from a cup as it floats down the winding stream from the peach blossom spring. We’ve longed for sweet pastoral idylls since antiquity, but even back then they were more of a dream than a reality, it seems; and these sorts of dreams still float across the metaverse, like in the delicately desaturated, rhododendron-tinged YouTube videos of Li Ziqi, who shows us a soft fantasy of Chinese country life, of boiling soybean milk and steaming purple potato cakes, making Damascene rose paste for a lover, and searching for magnolia lily blossoms on horseback in the misty woods, and conjures up what is known, I believe, in the realm of future compass memes, as a Miyazaki patchwork.

“Countryside, The Future” presents a slightly, though not completely, different vision of rural China in the form of “Taobao villages” in Jiangsu province where farmers and local craftsmen display their wares and bargain directly with consumers using Alibaba’s livestreaming video channel Taobao. There are also displays on New Yubulu, a traditional village nestled in the soaring mountains of beautiful Guizhou province which has been converted into an AirBnB resort for those wanting to get away from it all; and the reverse-commuting farmers of Shouguang, who drive out to the suburbs to tend their greenhouses in the day, then return home to the city in the evenings to go line-dancing with their friends before bed.

Further up the spiral, the until-recently remote Kenyan town of Voi – with its glossy new train station, built as part of China’s Belt and Road Initiative, its tech hub and its sonar app for elephant detection, its experiments in universal basic income, its payment apps for the unbanked, its boda boda motorcycle taxis and its renewable energy programs – is presented as an experimental centre for “East African avant-gardes” and pastoral Afrofuturists. Is this what Shangri-La looks like today?

The slowly dying Calabrian communes of Riace, and Camini, were revitalised in a very different way following an unexpected incident when, in 1998, a boatful of Kurdish refugees were stranded on the rocks by Riace Marina and ended up settling there, which led to more and more refugees being welcomed and, rather unexpectedly, flourishing African-Arabian villages in the hills of Southern Italy. A film shows locals teaming up with refugees to renovate crumbling old houses, and combining their respective traditions into new kinds of pottery, and carrying, for the first time in decades (because before there weren’t enough strong young people around), the village statue of Christ down to the beach in a revival of an old tradition, and becoming good friends, and it’s all so sentimental and sunny and happy and brings tears to my eyes. But Calabria, and Voi, and rural China are only some of the dozens of different places this exhibition visits, looking for new ways to live.

It begins with a dissatisfied nuclear scientist in the Swiss mountains and ends, at the top of the Guggenheim spiral, with a photograph of a nuclear fission laboratory and a dream of clean energy forever. Up here a lifesize cut-out of Eve reaching for an apple, copied from a Rubens painting, follows visitors around on a robotic plinth with colour-changing lights. We are never going back to the Garden of Eden. But we can build our own sorts of paradise; and what I find compelling about Koolhaas and Bantal’s show is how it weaves together such grand, utopian visions of the future from what’s already going on out there, in the country. Its choral multiplicity of voices strikes many hopeful notes, and suggests it’s not too late to imagine different worlds.