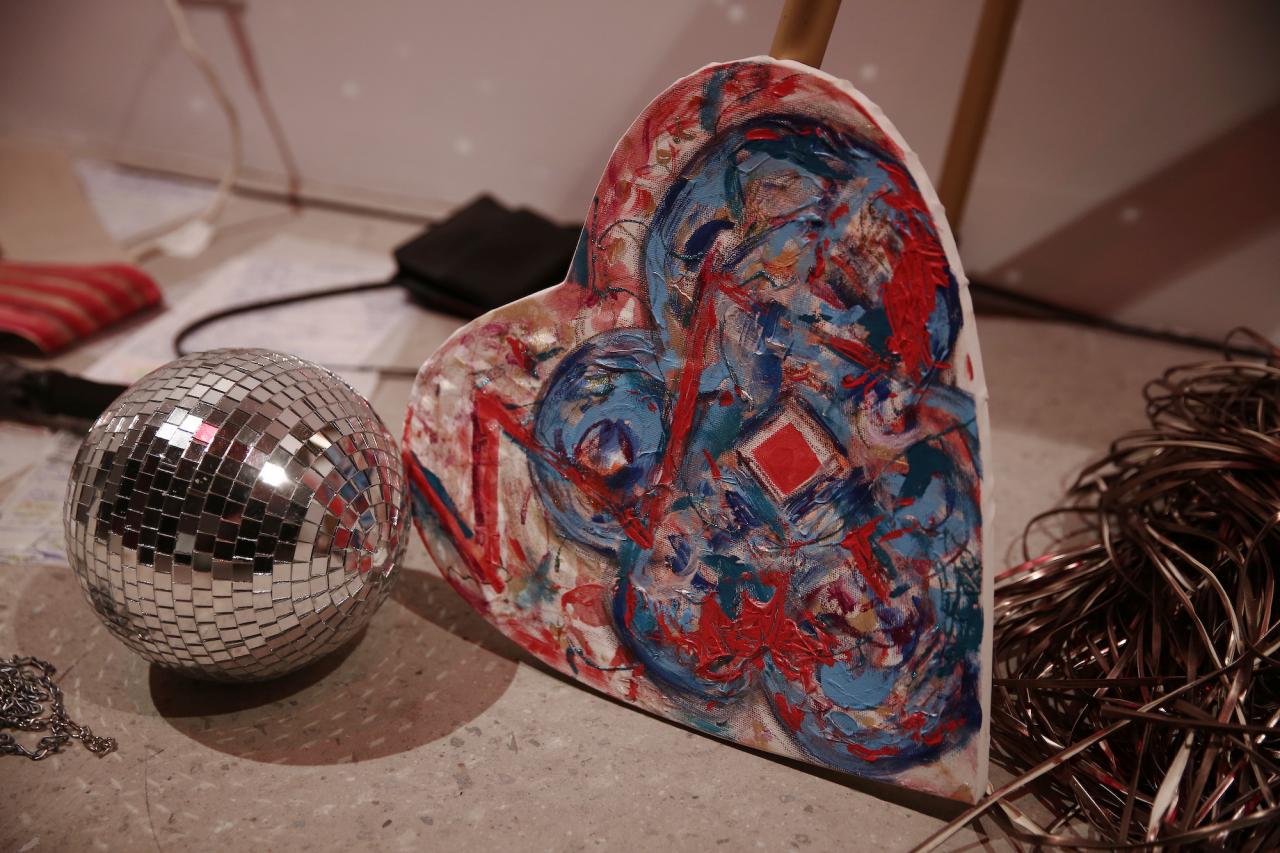 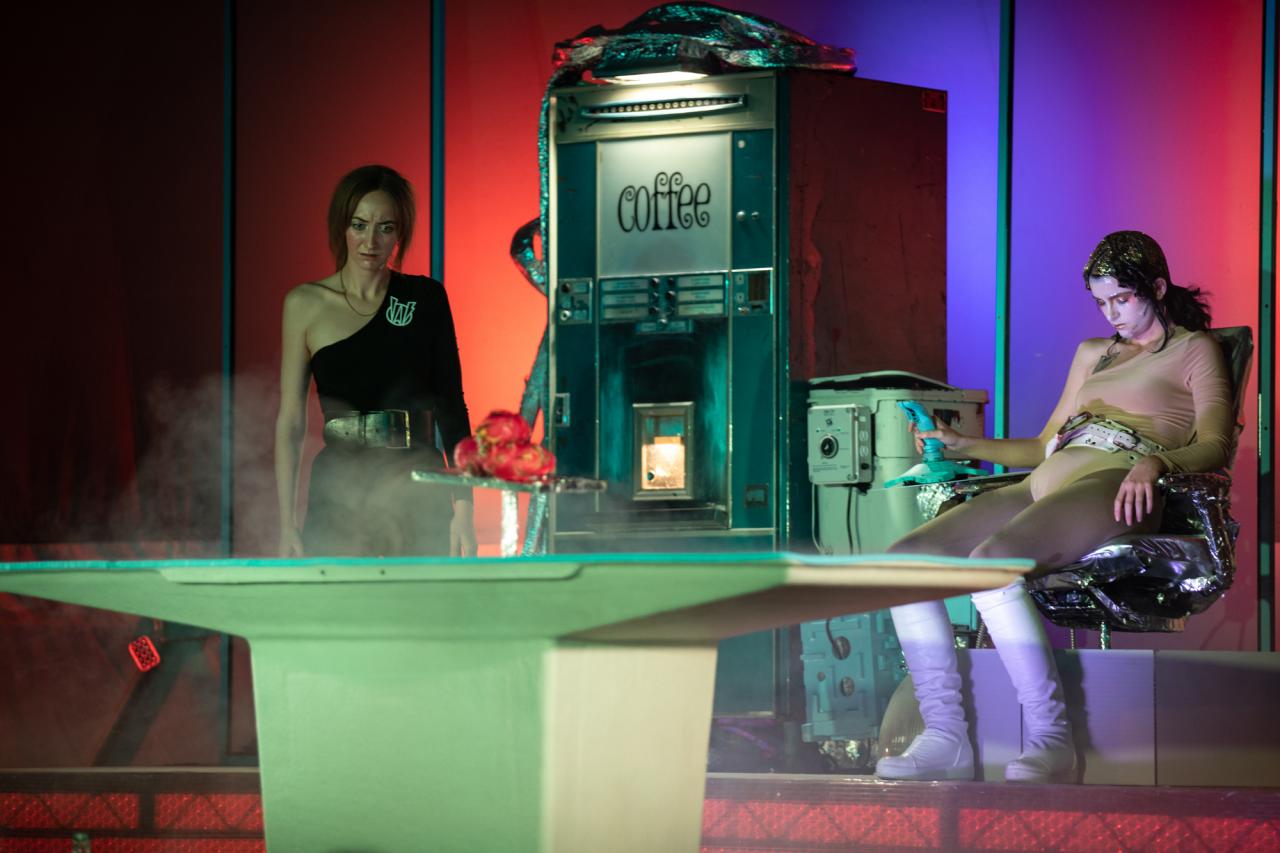 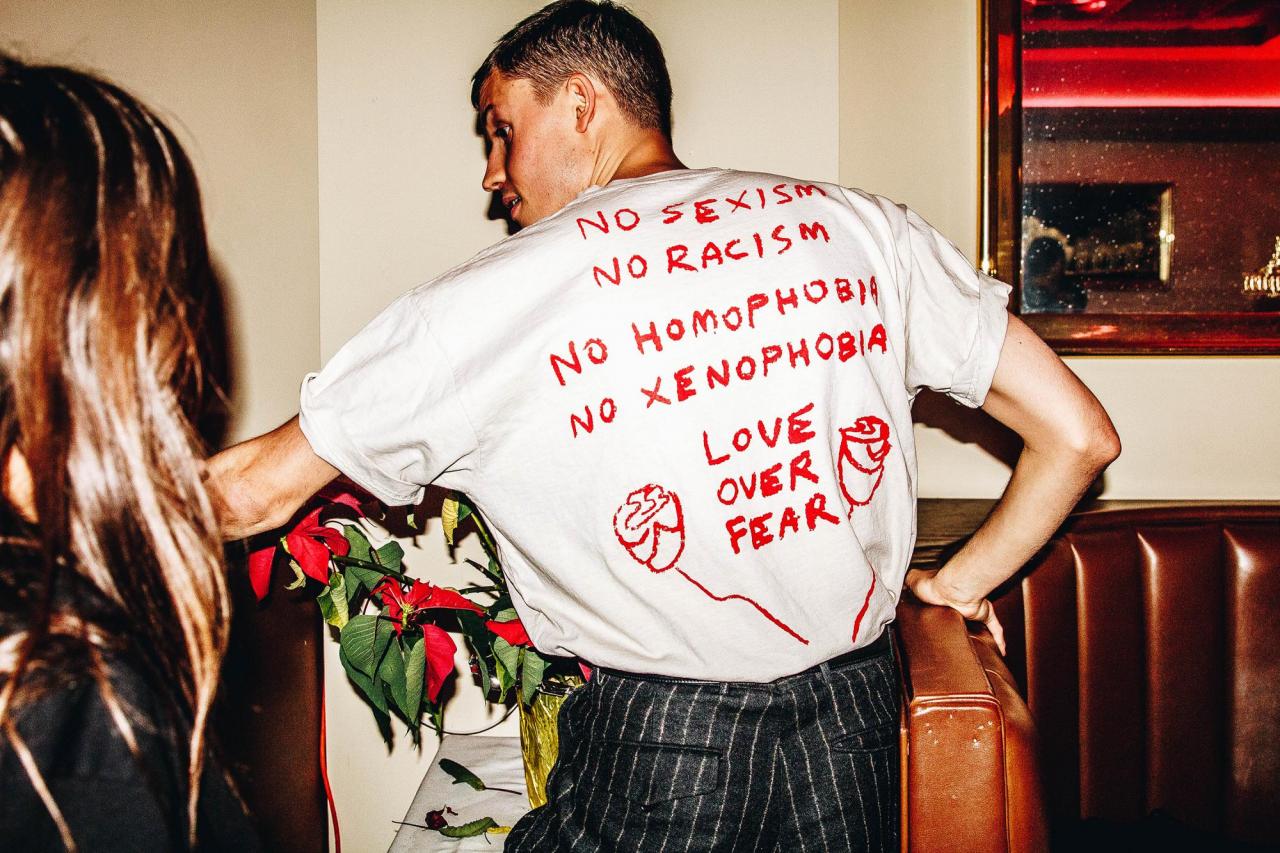 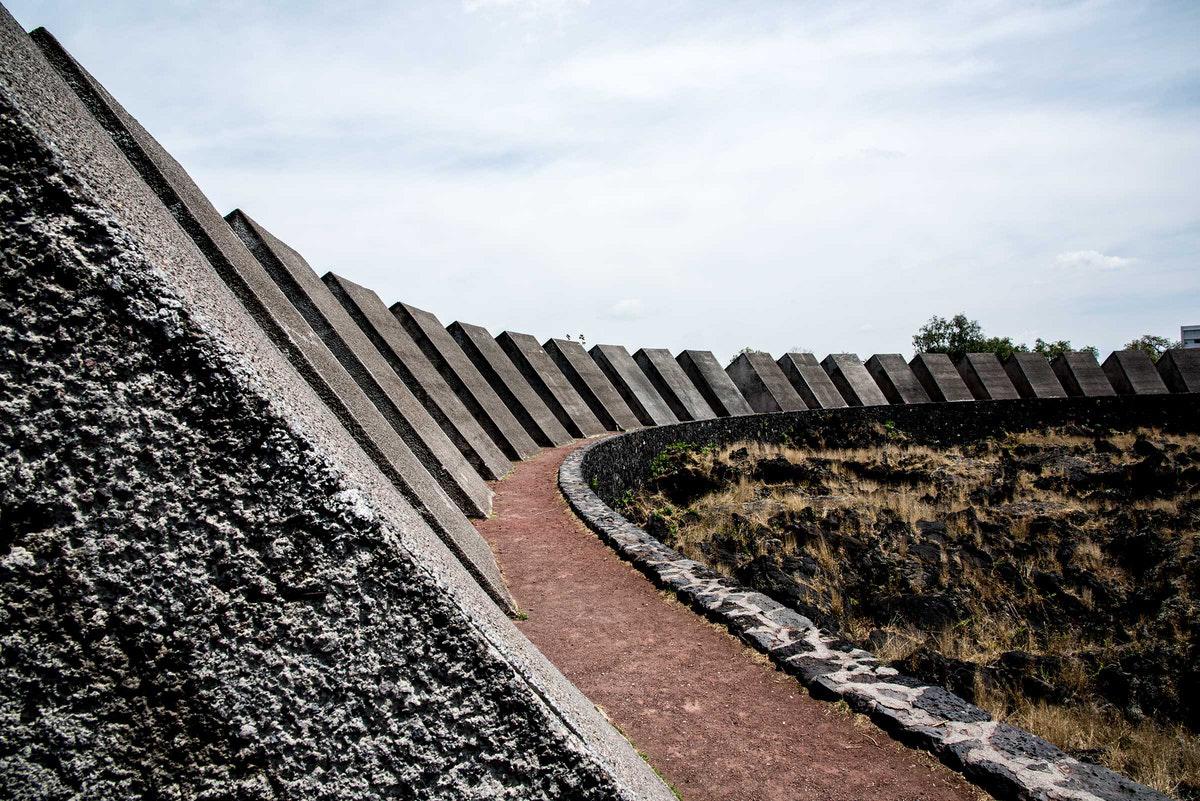 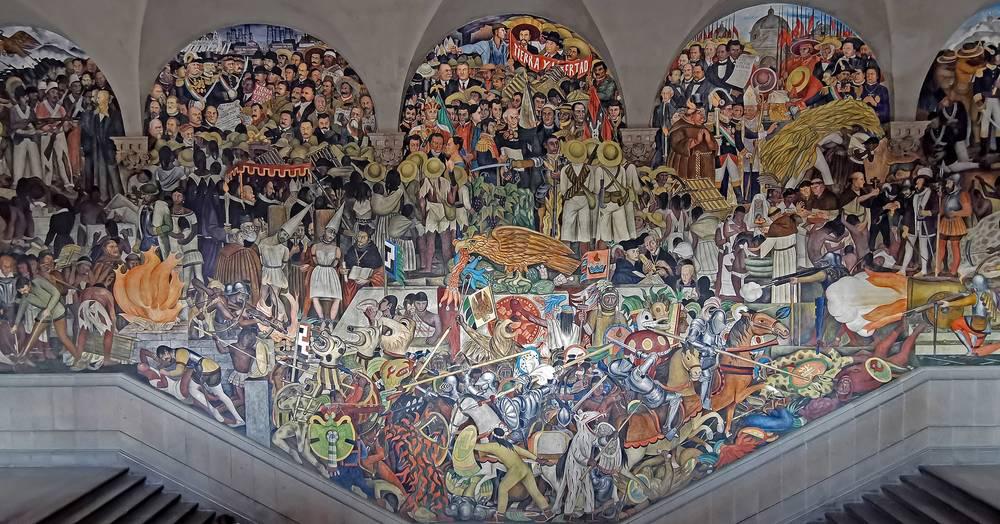 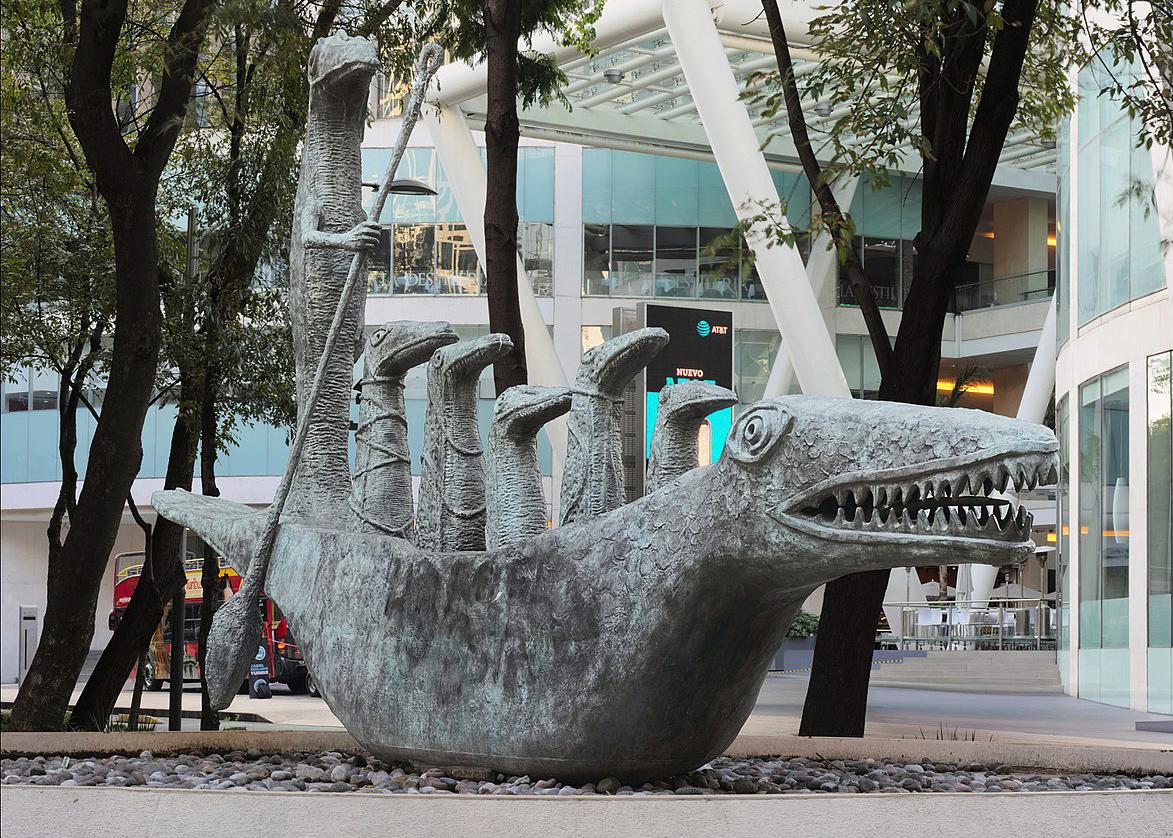 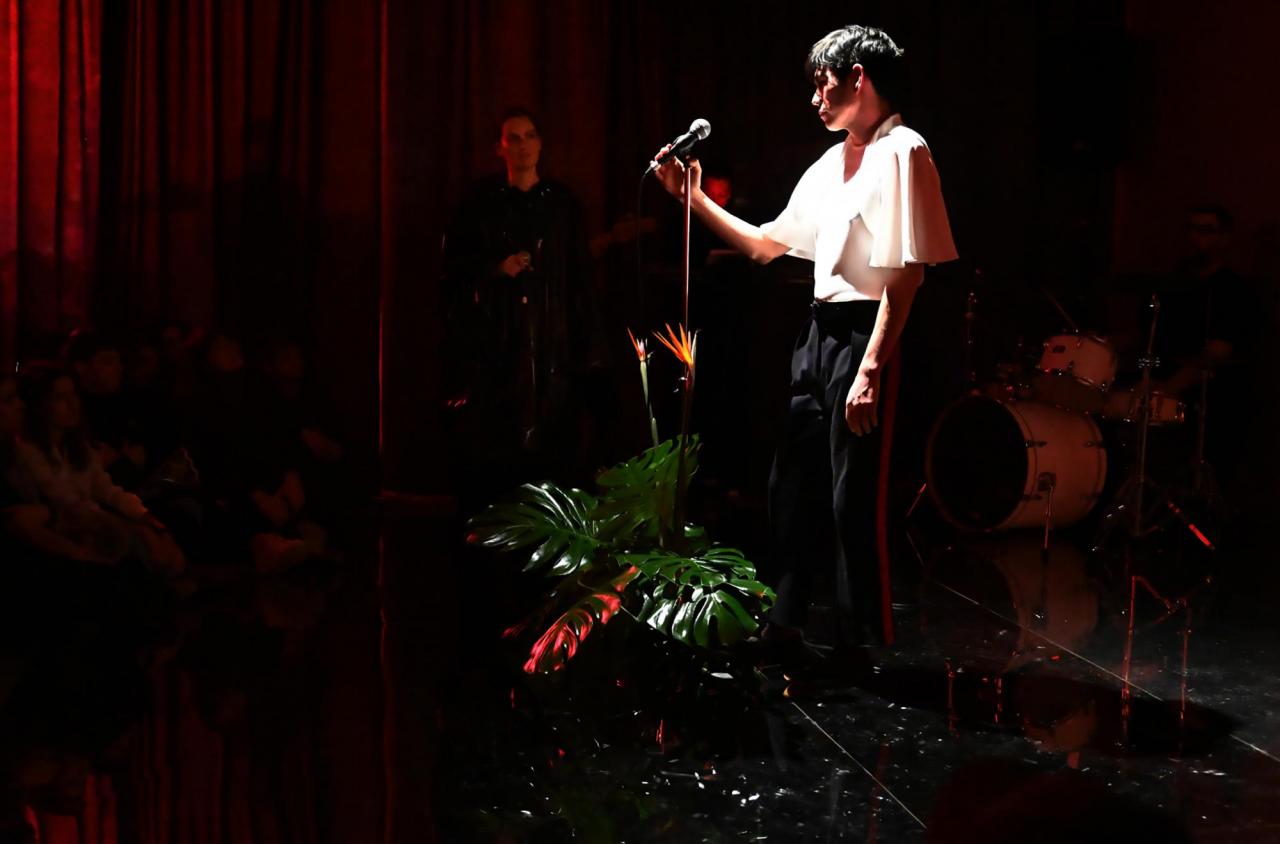 With the dawn of a new decade comes the possibility that all could start over, be good again. Why not? Dean Kissick takes us on a journey in search of exhiliration in art, theatre, and elsewhere. Follow his trek from Mexico to New York, out of the glum and into glam and glee.

I’ve had some happy times in galleries this year. One Sunday afternoon in the large basement of Artists Space’s new premises on Cortlandt Alley, I see Jutta Koether slow-dancing to jazz with one of her paintings, spinning it around, while slideshows of her drawings and found images play on the walls. She recites some poetry and says, among other things, that looking at cave paintings is like diving through time.

The feeling is of a nice and crowded café, or the avant-garde dream of what a café should be; as though we’re all diving through time to a century or so ago.

At MoMA PS1, playwrights Emily Allan and Leah Hennessy premiere their comedy Star Odyssey inside the geodesic dome in the yard, inside of which is projected a twinkling planetarium of stars. They’ve recently completed a short residency at CERN’s particle physics laboratory, and followed the trail of Byron and Shelley some of the way across Europe, during which time they wrote this homoerotic human-android fantasy dripping in early-19th-century English romantic poetry. It awakens obscure fetishes within me I wasn’t aware I possessed. In its blend of cyborg utopianism with the Luddite passion of the romantic poets, it also celebrates the latter’s longing for passion and excitement in the face of the gloomy despair of the industrial age; which is surely what we need more of today as well – more passion, more sensation, more romance and glory!

One has to try and be different. And right now, when so many have succumbed to doom and foreboding and self-pity and self-loathing, shouldn’t we try and be more optimistic? It’s a new decade and a moment of great possibility.

The 2020s could be about unhinged optimism, I tell myself. In the morning my mindful happiness course asks me to imagine a light inside me growing larger than the world, larger than the cosmos. I lie on my apartment floor picturing the ending of Akira. In the afternoon I hang out in the upstairs café of Kinokuniya Japanese bookstore and write Serbian cabaret with the artist Irena Haiduk. The day after I go to laughing yoga in the basement of a library on the Upper East Side with some artists and walk around pointing at people and laughing. At one point everybody becomes too hysterical and the group leader has to calm us down. There’s a girl who shows up late and stands slightly apart from the group and doesn’t really laugh. She did the same the previous week apparently. Most intriguing person I’ve crossed paths with in months.

After a brief sojourn in the East Village, where I was lured by the promises of a shiny new venue, the club night Glam returns to China Chalet with a fantastic homecoming party. Laws are now enforced less strictly than before. At a party in a Brooklyn loft I take acid for the first time. My train ride back to Manhattan is great. Walking home around 4 or 5 in the morning I pass an elderly couple by the children’s playground on Houston. The old man stands outside by the fence. The old lady is twirling around and around in the playground pointing at the sky and laughing and calling to him to come join her. They seem so happy.

In Guadalajara I enjoy the city’s PreMaco art festival. In Mexico City I don’t go to any of the art fairs but I do catch food poisoning. Following a remarkably thorough guide of locations from Roberto Bolanõ’s trilogy The Savage Detectives (1975–1996), written by a fan that’s never visited the city, I visit the block where the Font family must have lived a couple of times, at different hours of the day, and retrace various walks and scenes from the story and wonder at the life of a passionate, bisexual Mexican Visceral Realist poet. Every day I walk around the city in an increasingly delirious state and dream of a different life.

The sculpture garden of the Universidad Nacional Autónoma de México in the suburbs is full of overgrown, degrading modernist forms you can climb over. It’s fantastic. There’s a giant stone circle, the Espacio Escultórico, where students lounge on top of steep monoliths, high in the air, reading their books or looking out across the city to the snow-covered mountains. A group wanders through the meadow in the centre and screams and laughs.

I go see Diego Rivera’s murals at the Museo Mural Diego Rivera, the Palacio Nacional, and the Palacio de Bellas Artes. The last one, Man, Controller of the Universe, is a recreation of a mural that was originally commissioned for New York’s Rockefeller Center but was destroyed in 1934. It has rows of chairs laid out and visitors sit and watch it like a movie. I also go to Diego Rivera and Frida Kahlo’s house and studio museum, and Frida Kahlo’s house museum, and Leon Trotsky’s house museum around the corner. At the Elena Garro Cultural Centre, a large bookshop in a striking architectural setting, in an old building within a more modern building, I have a flashback to childhood and how it feels to visit this sort of place for the first time. And I think, “My god, I love museums so much. And bookshops and libraries and cultural centers. And cities, walking around cities for days,” and my heart soars. A great wave of joy. It’s usually at such moments of exhaustion, and disorientation, that you have the most powerful experiences of art.

On the way home I stop at Leonora Carrington’s Cocodrilo sculpture in the financial district, below the skyscrapers. It floats above the sidewalk in front of a glossy new luxury mall, rung around with fluorescents and video advertisements, and has an anarchist symbol daubed on its cheek.

In New York I spend a day in bed hallucinating. The morning after, curator Laura McLean-Ferris and I ride a train up to Irena Haiduk’s cabin in the woods to help prepare her performance Cabaret Économique. We form a band with musicians Christian Schmitz and Danny Bauer and dancer Maggie Segale. A few days later we perform the cabaret – an evening of saucy love songs, waltzes, absurdist theatre, and dark Balkan comedy – in the gorgeous, mirrored pink candlelit Serbian social club Irena has built inside the Swiss Institute, and it feels like we’re diving through time once more and my dreams of the avant-garde are coming true. The 20s are historically a good decade for cabaret. And this, I believe, is what many people want from art right now: a wild live experience; that can’t be sold, or captured on Instagram; that’s neither careful nor polite; that can go very wrong.

Our last show is on Valentine’s Day, and afterwards some of us go to a party thrown by fashion designers Gauntlett Cheng at MX Gallery in Chinatown, on the fifth floor. I lounge around in the back room for hours. Everybody’s sharing molly and ketamine and coke and wearing angel wings. It feels like we’re a fresco on the ceiling of a Florentine chapel. Heavenly New York night.