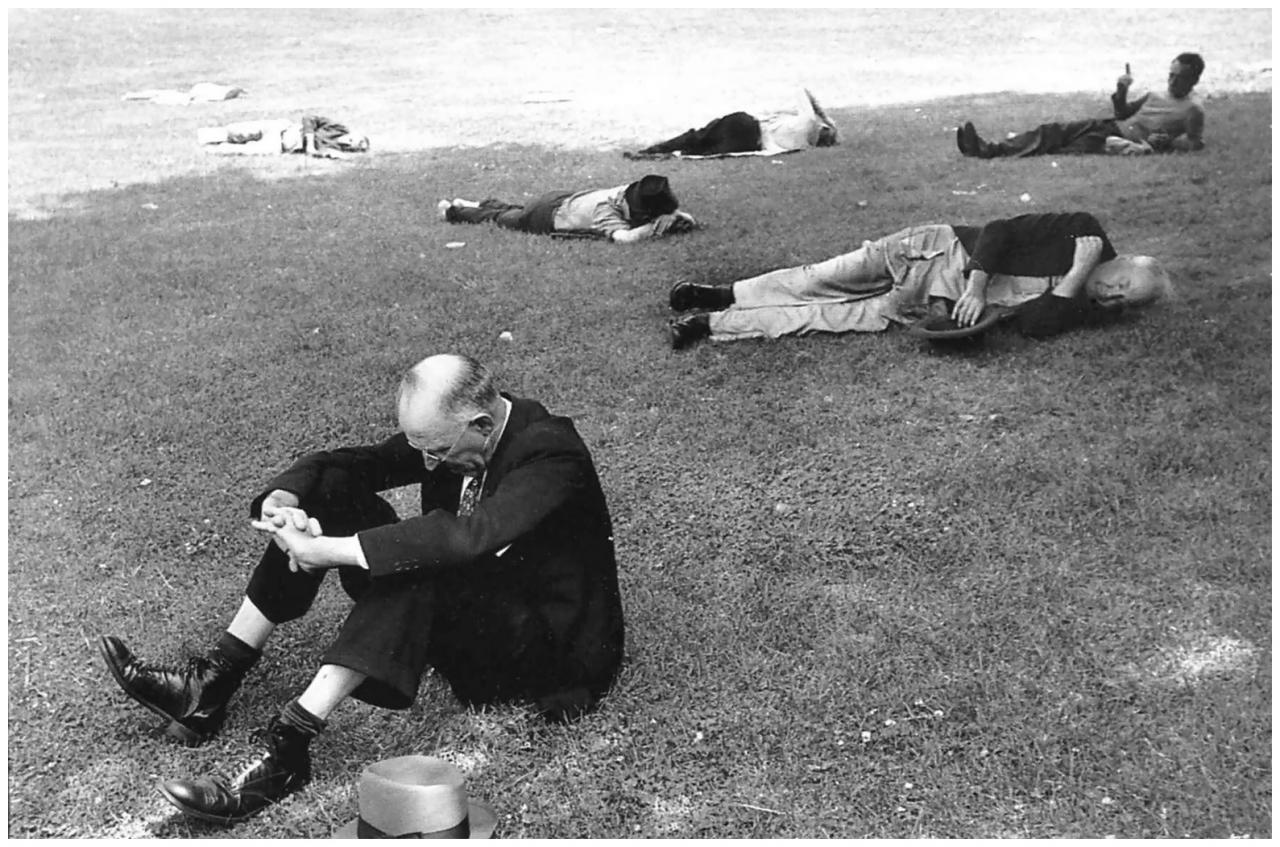 In the near future, full automation may mean the end of work. And what will we do then? The answer might lie not in front of us but behind us.

In Venice last year, Christine Macel’s “Pavilion of Artists and Books” greeted visitors with a spread that could best be described as somnolent. Entering the cosy building (unlike the national pavilions, which by the time I visited in midNovember were quite chilly, it had central heating), you were first presented with a paragraph laying out the etymological and conceptual history of the oppositional – yet codependent – pairing otium (leisure or idleness) and  negotium (business or work). If the second term serves as a contradiction or negation of the first, it’s able to do so only by embedding it, or rather being embedded through its prefix. And it was embedding, or embeddings, that proliferated all around the walls in image form.

Here was Mladen Stilinović, sleeping his way through the eight photos of his 1978 series “Artist at Work”, then again in the two large inkjet prints, from 2011 and 2017, that bore (as though he were too tired to come up with new ones) the near-identical title Artist at Work (Again). Here was Franz West, snapped by Friedl Kubelka in 1973, also sleeping; next to that, a West-designed or -appropriated couch beside which Macel’s team had felt obliged to print the warning non sedersi/do not sit; here, in the next room, was Frances Stark auto-depicted in her 2013 drawing Behold Man!, curled up on a sofa; then, in the one after that, Yelena Vorobyeva and Viktor Vorobyev’s 1996 installation The Artist is Asleep, in which a life-sized figure stretches out tussle-haired and blanket-swaddled on an iron bed.

"In economic terms, the realm of Kafka’s artistic production could be labelled one of negative equity"

I should note that I began writing this essay in my own bed, though I’ve since relocated to my sofa. These settings seem the right ones. Slouching into them, I feel my pliant thoughts aligning with the folds and pleats of those thought up by better, lazier writers. Baudelaire complains – or boasts – in his magnificent 1915 prose poem “The Bad Glazier” of being “worn out by idleness”. Kafka, in Letter to His Father, the text he wrote in 1919 but never got round to delivering, and which in effect serves as his overriding literary manifesto, elaborates a complex economic schema in which, throughout his childhood and adolescence, he accumulates his intellectual and creative capital by frittering away the credit that he has inherited from his successful businessman father, lying down with books or simply “lazing away more time on the sofa than you did in all your life”. (Anyone familiar with Kafka’s signature story “The Metamorphosis” will recognise the couch-bound imagery.) In economic terms, the realm of Kafka’s artistic production (to borrow Macel’s formulation, his negotium) could be labelled one of negative equity, whose productiveness is precisely commensurate with its own unproductiveness (or otium). This profligate setup in turn calls to mind the corpus of Georges Bataille, his multiple disquisitions on the relationship between use, exchange and surplus values, and the ruinous expenditure that forms, for him, the font from which all art, like spilt blood, flows, an endless gift ….

Yes, allowing these thoughts and connections to take shape, to be shaped by the sofa, laptop warming my thigh like a purring cat, I can begin to discern, as though through an opium-smoke haze, the outline of the essay that I should be writing. Bataille contra Marx … dépense sans retour … potlatch … the gift economy … something about Lewis Hyde … and Situationism … then … something else …. Soon, I tell myself, there’ll be an app or software programme capable of filling in the gaps while I doze off. (As an aside: I read a year or so ago about a program aimed at lazy writers. It would prod you into productivity by timing stretches of inaction – stretches, that is, in which you’d added nothing to your word count – and, when such a stretch grew to the length you’d preselected, fifteen minutes for example, it would start deleting the words that you’d written prior to that. The programmer’s thinking was that the threat of irreversible erasure would send such chills down any writer’s spine that they’d be spurred into torrential outpourings of copy after fourteen minutes fifty. I, though, channelling Beckett, saw it as the perfect writer’s tool. You start with a completed eighty-thousand-word draft, and put your feet up as you watch the program eat away at it, returning voice’s babble back to perfect silence, language’s stain back to exquisite blankness …)

"What will the erstwhile labourers do all day? It’s nice to think that universal basic income will free them up to become poets, artists and philosophers..."

We run, or at least slouch, up here against the question of automation. And not just for vanguard novelists: this is the age where tractors drive themselves; soon, all the farmland in the American Midwest will be auto-sown, robo-harvested. What will the erstwhile labourers do all day? It’s nice to think that universal basic income will free them up to become poets, artists and philosophers – perhaps, even, to shortcut straight to the critical end of Marx’s fantasy (laid out in The German Ideology) of being, in an ideal communist society, a hunter in the morning, a fisher in the afternoon, a cattle-rearer in the evening and a critic after dinner. To be sure, there is a history of workers’ cultural production: theatre, literature and music generated collectively during hard-won leisure time – could this not flourish in the new conditions? Maybe, maybe not; reframing the less utopian yet sadly more realistic scenario of hundreds of thousands of laid-off farmhands wandering around in zombified opioid trances as an extended cultural performance takes quite a leap of the imagination.

The question persists, though: when labour becomes automated, what does this mean for both work and the work, not least the work of art? I’m no future-caster; and anyway, as Walter Benjamin so deeply understood, the worthwhile knowledge-kernels lie not in front of us but in our furrow’s churned-up wake. So let me end by pulling from the pre-tilled soil an 1897 text by Mallarmé – one that, from here on my couch, seems to speak to these concerns almost prophetically. In his short prose piece “Conflict” Mallarmé describes retiring, every weekend, to a house just outside Paris where, amidst “the isolation of forest and pool”, he can compose in peace – until the dreadful day when noisy labourers invade his idyll. These workers are building a railway – a machinic network, symbol of modernity, of automation, of tech’s shrinking of space and time – and, what’s worse, they’re using half his rented house as a mess hall. Mallarmé, naturally, reacts to their arrival with horror – but also with fascination. In them, he sees “artisans of elementary tasks”; their postures as they dig the ground cause him to muse that “some robust intelligence bends their spines every day in order to extract, without the intermediary of wheat, the miracle of life which grounds presence”. He even speculates that, where his more bourgeois contemporaries don’t really get his whole poetic project, these men might actually understand; he conducts with them strangely Marxian dialogues about the comparative value (again: use, exchange and surplus) of their work and his – but only in his head, since he knows that any actual verbal engagement would most probably result in his being clobbered on the nose for being a posh branleur ….

"MallarmE slinks into the corner of the house in which he can no longer work, to find the workers not working either. They’re all lying around the garden in a drunken stupor..."

Now, where the piece gets really interesting is the day when Mallarmé arrives and slinks into the corner of the house in which he can no longer work, to find the workers not working either. They’re all lying around the garden in a drunken stupor – what he describes as “a work stoppage, an awaiting, a suicide”. They’re not working, he’s not working: it’s as though both sides are somehow sensing or anticipating their looming redundancy – or at least some kind of modal shift, a gap opening up within their constitutive tool-beings; a tool-downage, or tool-out-of-hand-placing; in temporal terms, an interval or (to use one of Mallarmé’s own favourite expressions) interregnum, in which everything hangs in the balance. And in this interregnum, gazing down in reverie at the (non-)workers from his first-floor window, Mallarmé is granted a sudden Benjaminian moment of thought-crystallisation, which he renders in the following manner:

Constellations begin to shine: I wish that, in the darkness that covers
the blind herd, there could also be points of light, eternalising a thought,
despite the sealed eyes that never understood it – for the fact, the
exactitude, for it to be said.

The words are at once beautiful and agonisingly opaque. What do they mean? I think the only way of understanding them is structural, or relational – in other words, their meaning lies in the set of relations joining (and separating) worker and poet, artisan and labour, time and production: a whole geometry of overlapping lines in whose midst, a perfect yet elusive centre, a gem that neither pick, shovel nor pen has managed to unearth but whose unearthing is the scene’s potential – and momentous – prize, lies it. What is it? Who knows. But the saying of it is everything.

Tom McCarthy is a novelist whose most recent book is Satin Island (Knopf).

– This article appeared in Spike Art Quarterly #54, which you can order at our online shop –