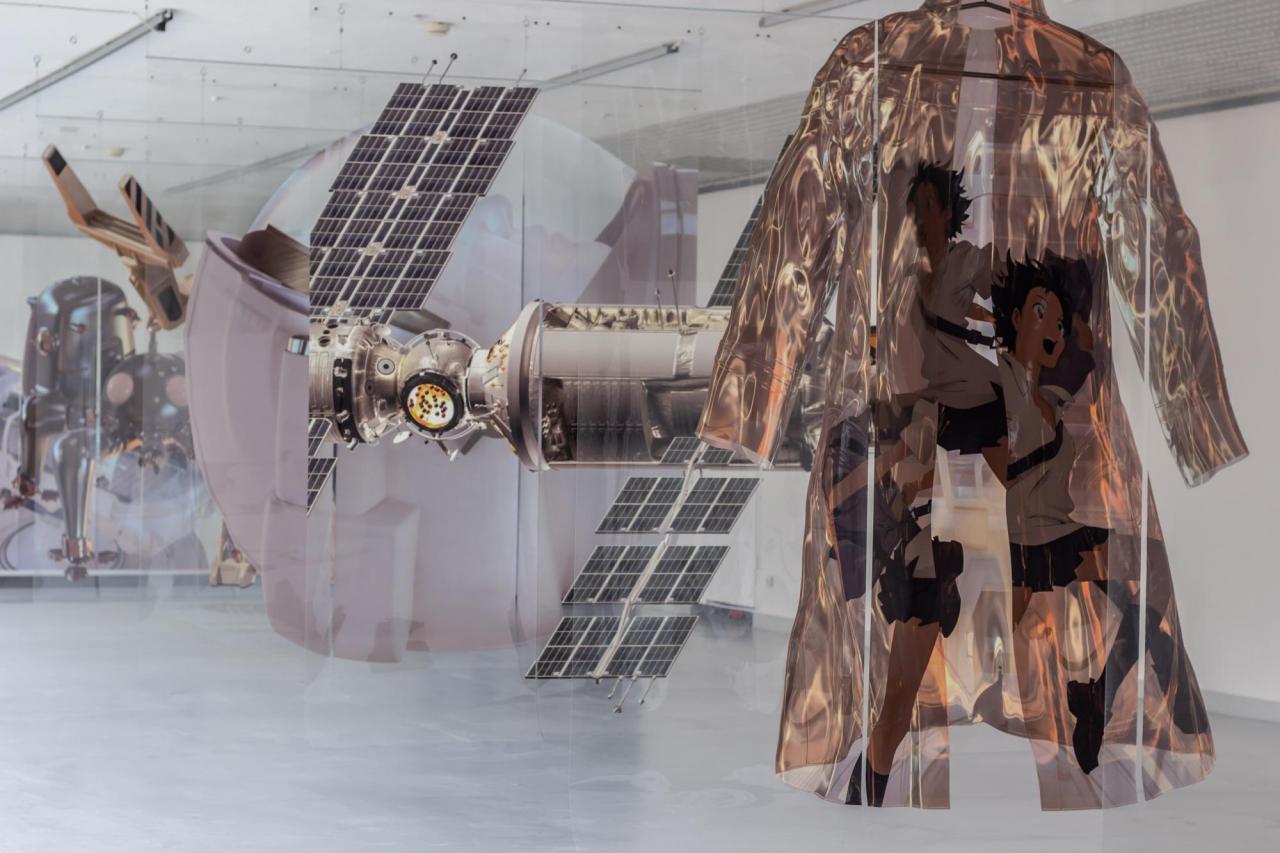 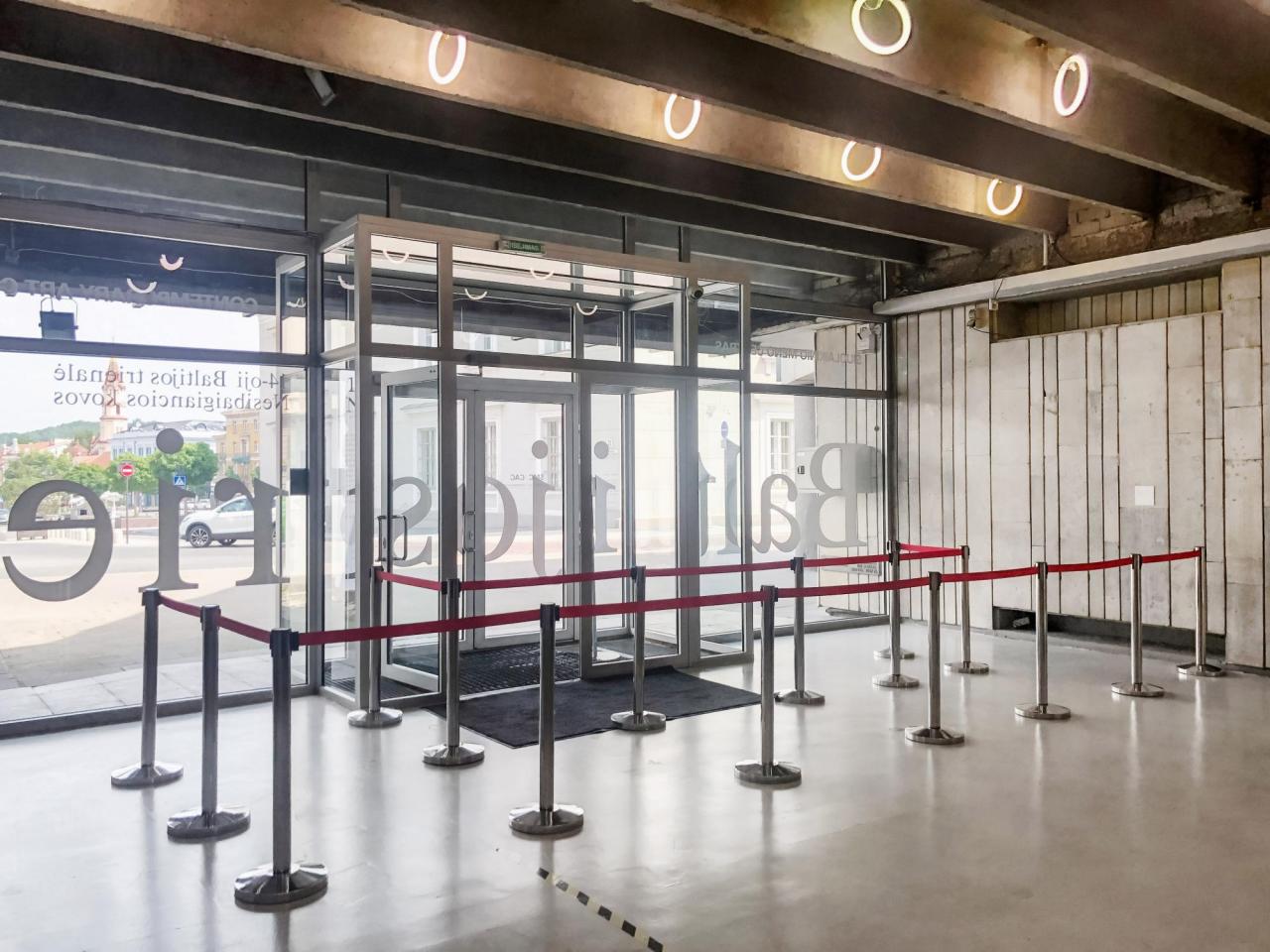 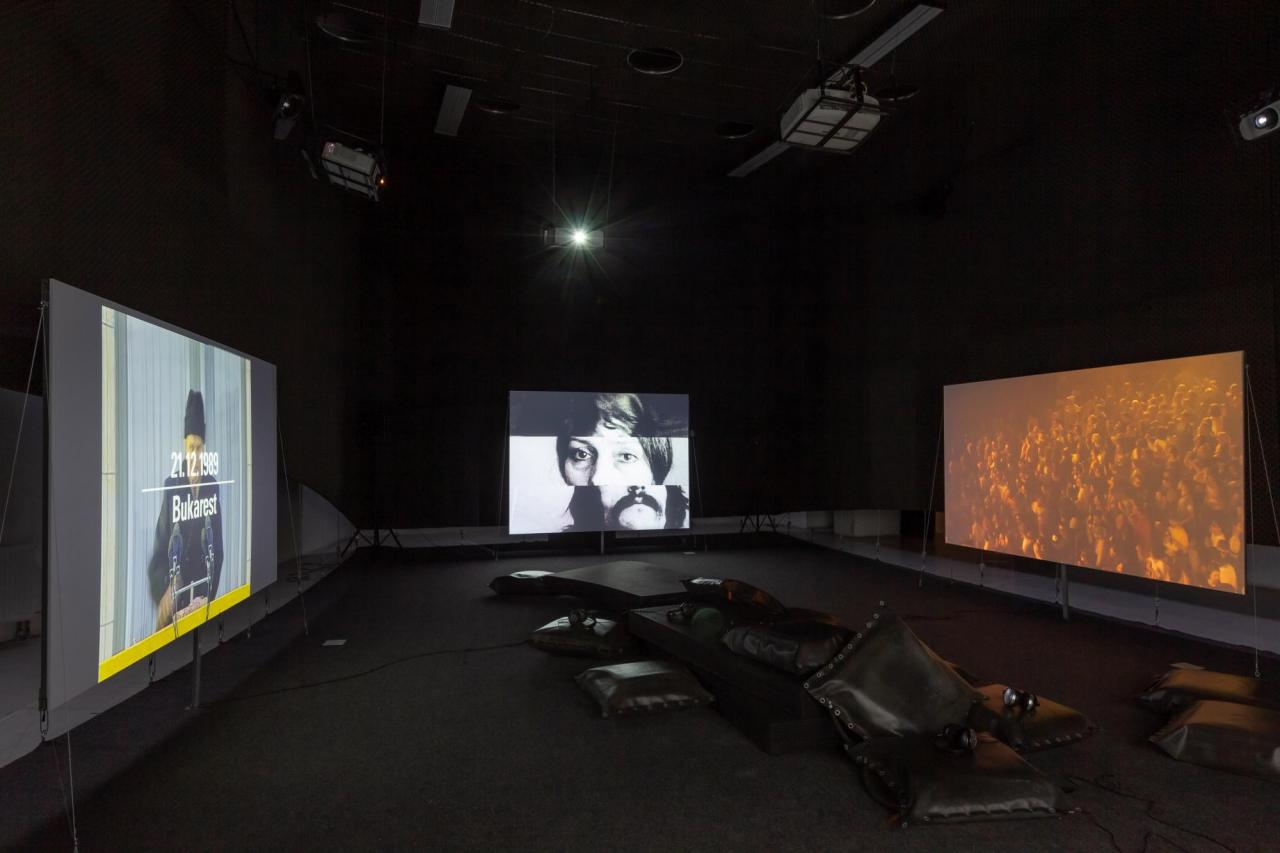 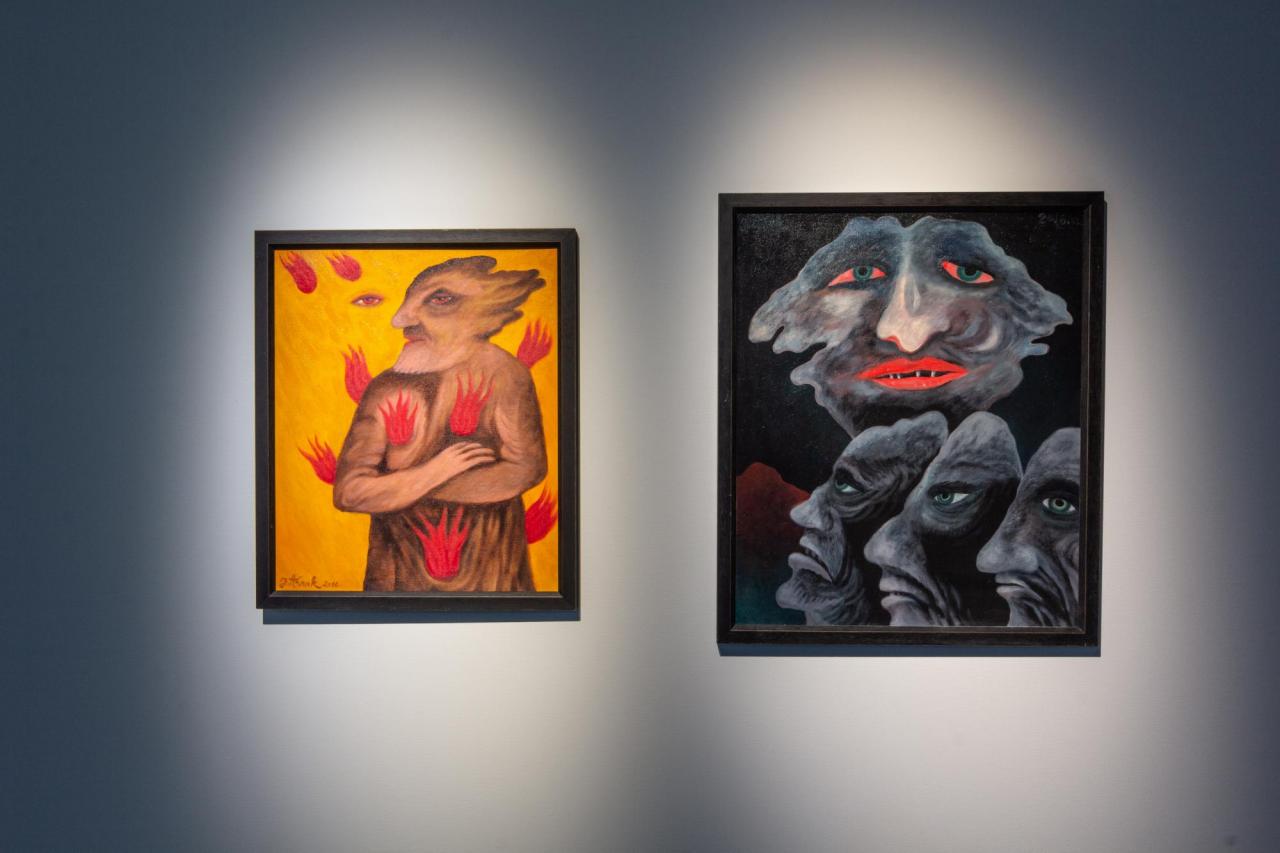 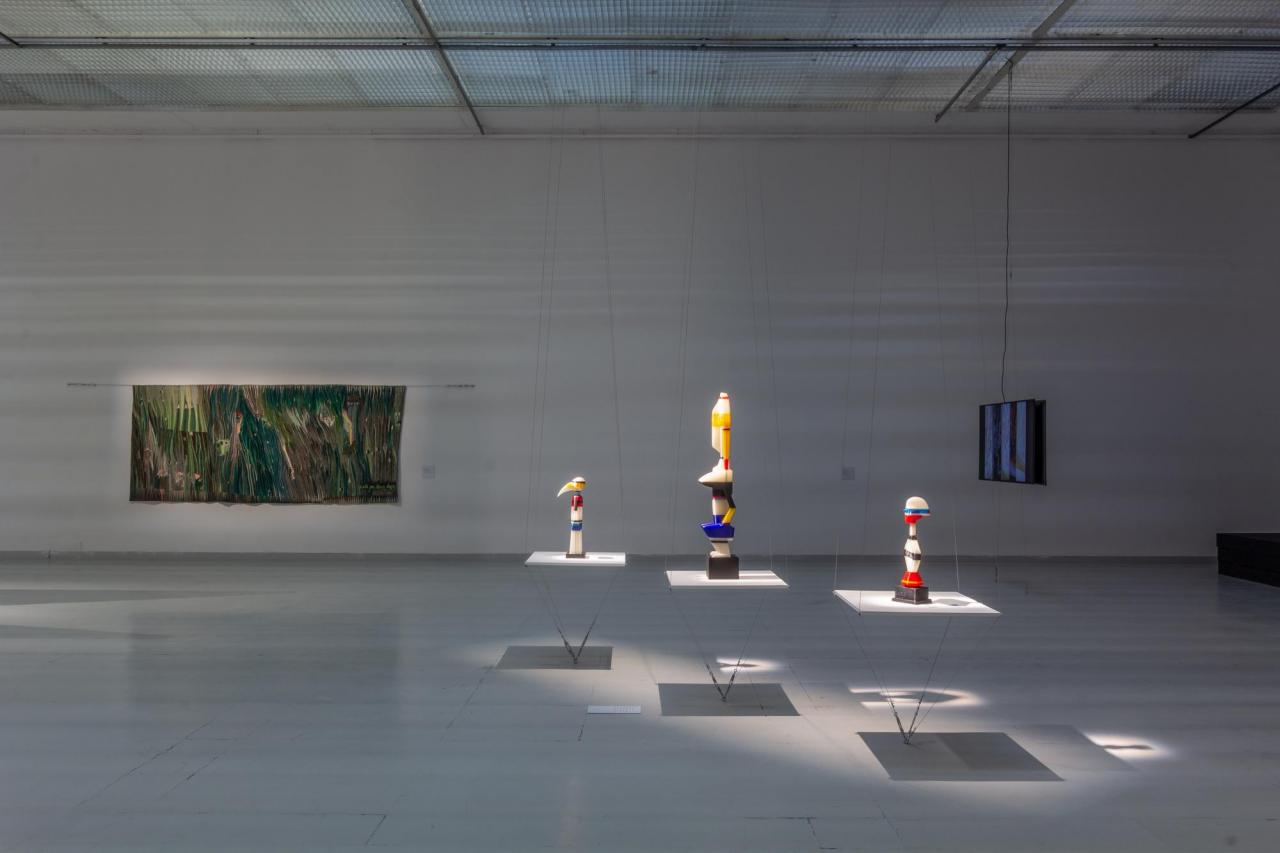 Titled The Endless Frontier, the 14th Baltic Triennial opened at the Contemporary Art Center (CAC) in Vilnius a bit more than a week after a Ryan Air flight headed to the city from Athens was forced by Belarussian authorities to divert, allegedly carrying a bomb that was supposed to explode over Lithuania’s capital. Upon landing at the Minsk airport, the 26-year-old Belarussian blogger Roman Protasevich – an open critic of Belarussian president Alexander Lukaschenko who lives in exile in Vilnius – and his girlfriend, Sofija Saega, were escorted from the plane by Belarussian police. Both were detained. Fellow passengers report that Protasevich begged the flight attendants not to follow the officers’ instructions, fearing torture and the death penalty. The disturbing impact of this recent event gave the exhibition’s name an unexpected, sinister new layer of meaning.

In its 14th edition, the Triennial, which started under Soviet occupation in 1979, focused for the first time exclusively on the greater Baltic region and its peculiar geopolitical position between Eastern and Northern Europe. For the curators, Valentinas Klimašauskas and João Laia, the historical shifts  – from feudalism to socialism to capitalism to neonationalism, from ‘Eastern Block’ to EU – that Central and Eastern Europe have undergone connect to the numerous global tensions of our time: disinformation, man-made industrial disasters, nativist nationalism, and the oppression of non-normative identities.

When I arrived at the CAC – the Triennial’s host space since 1990 – for the preview, the exhibition was still receiving its finishing touches. Yet it was actually much more complete than it looked at first sight: the roughness and makeshift appearance were a deliberate part of the exhibition architecture, a “choreography of space” by Isora x Lozuraityte Studio for Architecture, alluding to the transformation that lies ahead. BT14 is the last exhibition before the building, constructed in 1967 as a fine example of Baltic modernism, will close for extensive renovation. Reused plastic canvases in different hues covering walls and doorways like curtains made the interior architecture almost disappear completely. Visitors were guided through the maze by arrows pointing out passages to otherwise hidden rooms. A smart numeric system referred to pages in the guidebook. On the ground floor, the exhibition space was extended through darkish non-white cubes, former storage or workshop spaces that have never been open to the public before. At the entrance, a structure of poles and red ribbons used at airports to direct queuing lines was, surprisingly, not a security or pandemic measure, but an artwork by Nada Prlja (Queue, 2007). The staircase to the first floor, also wrapped in plastic, was partially blocked by an intervention by Flo Kasearu of pots with dead plants (Violence grows in Silence, 2021) – a sad work embodying the hindering of growth that comes as a consequence of constant maltreatment.

With its focus on Central and Eastern Europe, the carefully curated show juxtaposed contemporary artists from the Baltic countries, the Balkans, the Caucasus, and Finland with “historic” figures from those countries that have shaped contemporary art. These predecessors included George Mačiūnas (CAC has a room permanently dedicated to the Lithuanian father of Fluxus), Edward Krasinski, Mladen Stilinovic, and Natalia LL. Jonas Mekas, the Lithuanian-born, recently deceased “godfather of American avantgarde-film”, was present with the 4-channel video Lithuania and the Collapse of the USSR (2009), which he had filmed with a Sony camera from television, while Harun Farocki and Andrei Ujica’s Videograms of a Revolution (1992) analyzed, in detail, official and amateur footage broadcast by demonstrators on television of the last-ever public speech by Romanian dictator Nicolae Nicolae Ceaușescu and its aftermath. Less famous references included the supernatural paintings evoking mythological figures by Jüri Arrak, who entered the Estonian art scene in the 1960s, juxtaposed with the intuitive ink and pigment paintings of intestines and other organic matter by the young Hungarian artist Dominika Trapp.  Following the writings of Simone Weil, Trapp uses painting as an ultimate medium of somatic experience, taking on feminist theory, mythology, and the re-appropriation of the female body.

By situating Vilnius and its rich artistic legacy as the nucleus of the peculiar construct of “Central and Eastern Europe”, highlighting transnational connections on a larger and on a smaller scale, BT14 proposes inclusion rather than enacting exclusivity.

The manually-woven, wall mounted tapestries of philosophically inspired micro-landscapes by Lithuanian artist Danutė Kvietkevičiūtė – for instance, Grass (Dedicated to M.K. Čiurlionis), 1975 – were set in dialogue with Klára Hosnedlová’s wall pieces from the series Nest (2020), composed of casts of architectural details from iconic socialist buildings such as the utopian Ještěd Tower in Liberec, Czech Republic. Augmented digital images rendered photorealistically in embroidery, the tapestries’ fine stitches zoom in – quite literally, as the magnifying glass is a recurrent motif – on enigmatic narratives relating to those buildings and Eastern European histories. In a room overviewing the CAC’s sculpture garden (the only one those windows were not obscured by plastic foils), Aleksandra Domanović staged a cinematic installation (Things to Come, 2014) of details from science fiction movies like Blade Runner and Alien, rare instances where female characters occupy narrative roles beyond mother, love interest, or victim. Printed on transparencies, these objects also reference the marginalized role women were granted in colouring the celluloid plates used in Walt Disney’s historic animation studio.

Besides the main exhibition in the CAC, BT14 connected the vivid contemporary art scene of Vilnius by inviting five independent project spaces – Atletiko, Autarkia, Editorial, Rupert and Swallow – to organize exhibitions in parallel. With a solo presentation of Tomasz Kowalski’s dreamlike gouaches and paper sculptures at Swallow and a group of outdoor banners wearing cryptic signs as part of the group show “Authority Incorporeal” at Rupert, these satellites connected to the main show while presenting their individual programs autonomously.  By situating Vilnius and its rich artistic legacy as the nucleus of the peculiar construct of “Central and Eastern Europe”, highlighting transnational connections on a larger and on a smaller scale, BT14 proposes inclusion rather than enacting exclusivity. In a paradoxical time of fragmented integration and slowed-down mobility, questioning the global by addressing the local might be one way out of the global (art)world’s dilemma.

EVA SCHARRER is a curator and author. She lives in Berlin.