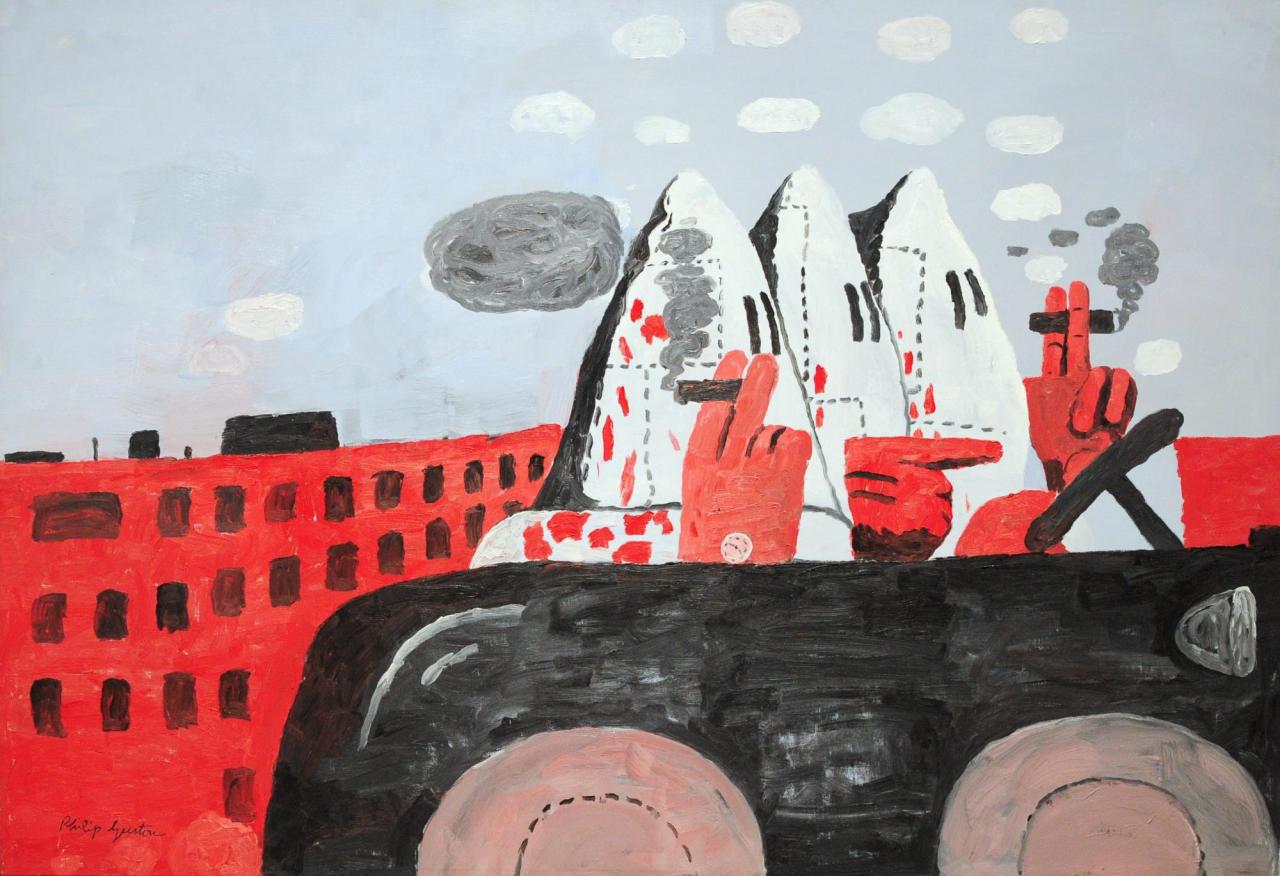 There's been a debate raging about the postponement of a massive Philip Guston retrospective at four different museums. So, naturally COLIN LANG has to throw his yarmulke into the ring.

By this time next Wednesday, 4 November, either all will potentially look different in the US, or things will just get worse.

There’s an order to the chaos, a simple rule: when you think things can’t get any worse, they do. In the meantime, there are little distractions, debates, cancel culture, to avoid the truth of a collective misery. One such debate (is it still a debate?) has to do with the postponement of the planned Philip Guston shows, at the National Gallery of Art Washington, Tate Modern London, Museum of Fine Arts Boston, and Museum of Fine Arts Houston. There was an open letter to these institutions signed by a bunch of folks, including major artists like Joan Jonas, Nicole Eisenman, and Lorna Simpson, who worried that censorship, well intended or not, was anathema to art and to the challenges that it proposes. Many a journalist through their cap in the ring to either confirm the letter’s premise – no censorship – or offered watery analyses of what’s really going on behind the discussion. The monster that this has turned into, while having no real impact on the operations of art institutional life, has managed to obscure and neglect some larger issues. If there’s a formula that things can only get worse, perhaps an even greater truism about the US, is when given the opportunity to open the doors of hermetically sealed histories and identities, Americans will, without fail, lose sight of the bigger picture.

All of the hemming and hawing about Guston’s Klansmen, which many worried would send the wrong signal to protests around racialised violence across the globe, but especially in the US, has churned up not a single reflection on the possibility that these are amnesiac times, and that more complex historical constellations are flattened into silly bickering. How do you find an opening inside of a debate whose very parameters have already been drawn? Are you for or against the postponement? And who cares, really? The underlying criticism falls on the simplest, most vapid version of iconography. Something many of those in the know should be ashamed to admit. There are Klansmen in Guston’s depictions of evil, but if that’s the message, who is the receiver? That is a central question to be addressed, but the appearance of these paintings, which have been on view for decades, has had the effect of shrouding Guston’s caped characters in a blithe assumption of whom is actually interpellated by these white knights? Who, really? Or if anyone is spoken to at all? I wouldn’t claim some kind of arty ambivalence here, like Guston was an artist and it’s his vision and blah blah blah. This kind of gesture to preserve voice and authentic expression is a hell much hotter than any room populated by cartoonish ghouls.

The US amnesia is a war machine, crushing the history of worker’s rights, union activism, and class consciousness, a term that is so utterly foreign to public discourse in the US that it might sound like German.

What is fascinating about the Guston debate is the fact that it is symptomatic of how public discussion develops and gains steam. Something very important (history and continuity of white supremacy and racialised violence) is made over into an object. Is it like reverse melancholia, creating an object filled with attachments instead of destroying them? Whatever it is, the ability to create a thing out of another thing (a painting) is a compulsive and ultimately compensatory move, and the victory of securing a belief and opinions about the object in question has the very negative effect of levelling history, specifically that which concerns the Civil Rights movement in the US. While the artist first turned to the Klan imagery in the 1930s, the paintings currently under scrutiny were completed at the height of the Civil Rights era. If you’re one who believes in galvanising moments, watersheds, the like, then the so-called Freedom Summer murders of James Chaney, Andrew Goodman, and Michael Schwerner in Mississippi is certainly one. It bears repeating, that two Jews and a Black man were abducted, arrested, released, and then hunted down and brutally killed. It is impossible to imagine that this was not in Guston’s (né Goldstein) mind, and the Klan posed an imminent and real threat to his own person and family. Not exactly friends to many, the Klan, and why this has managed to be supressed in the conversations surrounding the postponement of the Guston show, is, unfortunately, typical, all too typical.

What if the debate, occasioned by some paintings, were an opportunity to discuss shared histories of violence, suffering, and fear? That the addressee of Guston’s hotly discussed paintings was of course, and first of all, Guston himself, the painter. The reception of the displayed works, should they be shown as planned, could offer a moment to reflect on solidarity, and the fact that the colour-line was not the only factor at stake for the Klan. Even more recently, there were chants in Charlottesville in 2017, “Jews will not replace us!” It reminds me of the work of the sociologist William Julius Wilson, who argued time and again, that there is more that connects us people at risk than divides us. Hardly a mention of this recent history in the US, nor Goldstein’s upbringing, nor the fact that Guston’s early mural work appeared in the John Reed Club of Los Angeles. John Reed, anyone? The US amnesia is a war machine, crushing the history of worker’s rights, union activism, and class consciousness, a term that is so utterly foreign to public discourse in the US that it might sound like German. The Guston mural in Los Angeles was meant to raise money for a trial of nine Black teenagers accused of rape and sentenced to death; not exactly for the art market.

That all of this keeps getting buried beneath the usual browbeating, the “no’s” and “yesses” is worrisome, to say the least. Who is looking at Guston’s Klansmen, who is addressed by them, and what stories and legacies do they connect to? Curators love to pat themselves on the back for trying to make older works contemporary. Well, Guston is contemporary again, because he has become just another cherry picked from the bottomless pit of amnesia.

Colin Lang is Senior Editor at Spike. His online column “Falling Out” appears monthly. Read the last one In the Belly of the Beast.