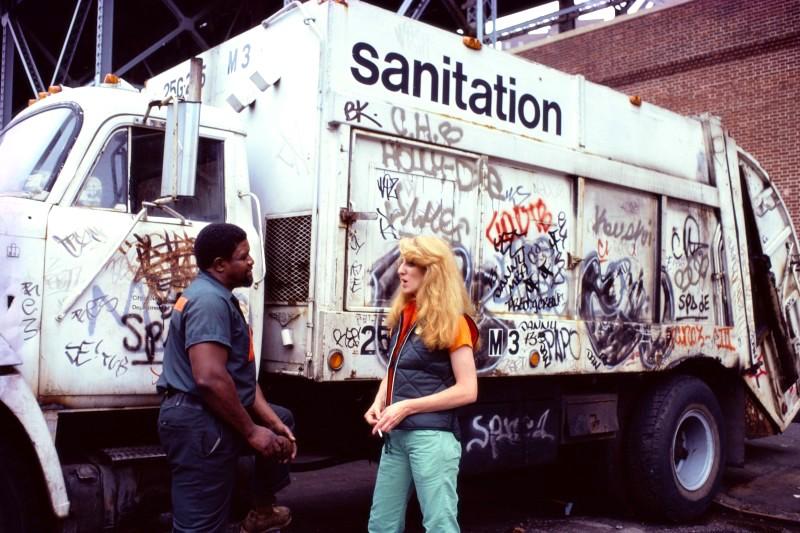 I’m pretty sure I have pink eye. Before I moved to New York almost eight years ago, I used to call my sister every day at the same time and talk to her while she rode the train home from work. I was a teacher in Arizona and had an earlier day, so we were done around the same time, with the three-to-four hour time difference (did you know that Arizona doesn’t believe in daylight saving’s time?). I remember laughing at her for getting pink eye from her boyfriend. I think she was defensive about it, saying that all day in New York, we touch disgusting things like the metal poles in the train cars that sometimes look like a braid of hands. There are many kinds of pink eye, I’m reading, and most of them just go away on their own, after a few weeks of oozing like a squinting alley cat, but they’re all “extremely contagious.”

New York is a cesspool, even compared to most large cities. My first reaction to most of the places I’ve been outside America is “It’s so clean.” Some people say they love the griminess of New York, but that’s not what I love about it. I think what I love can be described as an attitude or a pace. Maybe the griminess and the attitude are necessarily consistent. But to me, the way this city is built—with too many competing public transit systems and not enough recycling bins and hot garbage air blowing up from the sidewalks—is not its true essence.

Maybe that’s naïve—maybe that Manhattan is surrounded by dirty rivers teaming with barges full of waste, overflowing dumps in New Jersey, the Sanitation Department’s finest in Staten Island, and Brooklyn’s gasoline-scented Coney Island ocean waves is what props it up as this gleaming thing, this diamond in the rough. Maybe I’m just annoyed because every time I feel like I’ve reached a higher level of living here, the city’s hot dirty hands poke me in the eye. This summer has been particularly hot and cold, literally.

It could be worse. I’ve had bed bugs (twice) from working at a thrift store, scabies from traveling to Oakland, and a mouse problem that was only apparent when my roommates and I lifted the top of our stove to find a thick crust of years-old fecal matter. Of course I’ve heard the horror stories of roach infestations. Sometimes a kitten-sized rat will be waiting on the indoor steps to my best friend’s Lower East Side apartment when I visit. I’ve lived through pretty bad fruit fly and weevil problems in places I’ve sublet. The other day, I saw an opossum in my back yard and narrowly missed falling seagull shit at the beach. I used to love seeing wild animals, and now they all look like parasites. It’s common here to see pigeons eating fried chicken on the street. It’s the breading they’re after, I’m sure, but because they’re pecking at bird bones, the scene looks post-apocalyptic.

I said I’d never write about my trips to Staten Island because they were too precious to me, too close to something that could have been real, whatever that means. In fact, I was lost in some dream of what my reality is, after the rug was pulled out from under me in so many ways (a stagnant long-term relationship that turned out to be a lie, among other things). After a few comically bad dates to get back on my feet, I told a garbage man to meet me at a bar in Ridgewood. It was another novelty, something to tell my friends the next time we got together for margaritas after work. But once I saw him, his strong features and gentle demeanor, and heard his Staten accent, and made meaningful eye contact, and discovered that we both smoked and wanted to hide that from the other, and went out for a cigarette and looked at his $800 junker with red dice on the rearview, I was lost in one of those reveries, my heart swelling when he looked down and then up through long eyelashes. He made jokes about literature that were very smart, but he talked at half speed, punctuating every few words with “like” like some mob movie sidekick. It was like talking to the characters that movie star I dated used to play, but for real.

He didn’t understand why people moved to New York, still, and I said I wasn’t sure, either. Why did I move here? The publishing industry, I guessed, and my sister. It wasn’t because I felt more alive here, like I could see electricity in the streets, I said. It was the first time I made him laugh. Most Staten Islanders can’t imagine moving to Manhattan because of this thing that happens when you’re so close but so far away, this proximity that feels like a wall instead of water: when you grow up right there but never really there, it feels like the place is off-limits. It’s easier to get to Manhattan from Arizona, for example, than it is from Staten Island, because you’re oblivious to certain things about it. So close, but so far away, I repeated. His route was Chinatown, one of the most notoriously garbage-strewn parts of New York. I told him he may as well have said he was a cowboy, I found the trucks so romantic.

I thought for sure he could see through me and my privileged fascination with his industry and his outsider/New Yorker status, but he offered me a ride home and then had this little speech planned once we parked: he’d like to see me again, but understood I probably wasn’t interested—it was nice, though, the conversation that seemed to last a few minutes and was actually three hours. I looked at him, and it had been so long since I’d seen someone in that seat other than a cab driver. Of course we kissed, for a long time, and it wasn’t perfect but it was a nice kiss because neither one of us thought it would happen, we were each so insecure about the other person’s set of issues with the way the date could be read. I walked up the steps to my apartment a sparkling bliss I hadn’t felt in years. No matter what way it would go, it was just this really nice thing already.

Last year Spike invited Natasha Stagg to do the same: one text a week, of any length, on whatever she liked. One summer long. For 2018 we wanted to it again, this is her fifth report.

NATASHA STAGG is a writer based in New York. Her first novel Surveys was published with Semiotext(e) in 2016 and is coming out in German from Edition Nautilus later this year. A new installment of Out of State will be published online every Thursday for ten weeks. Last week she wrote about a polarizing friend, Kylie Jenner and her favorite party.