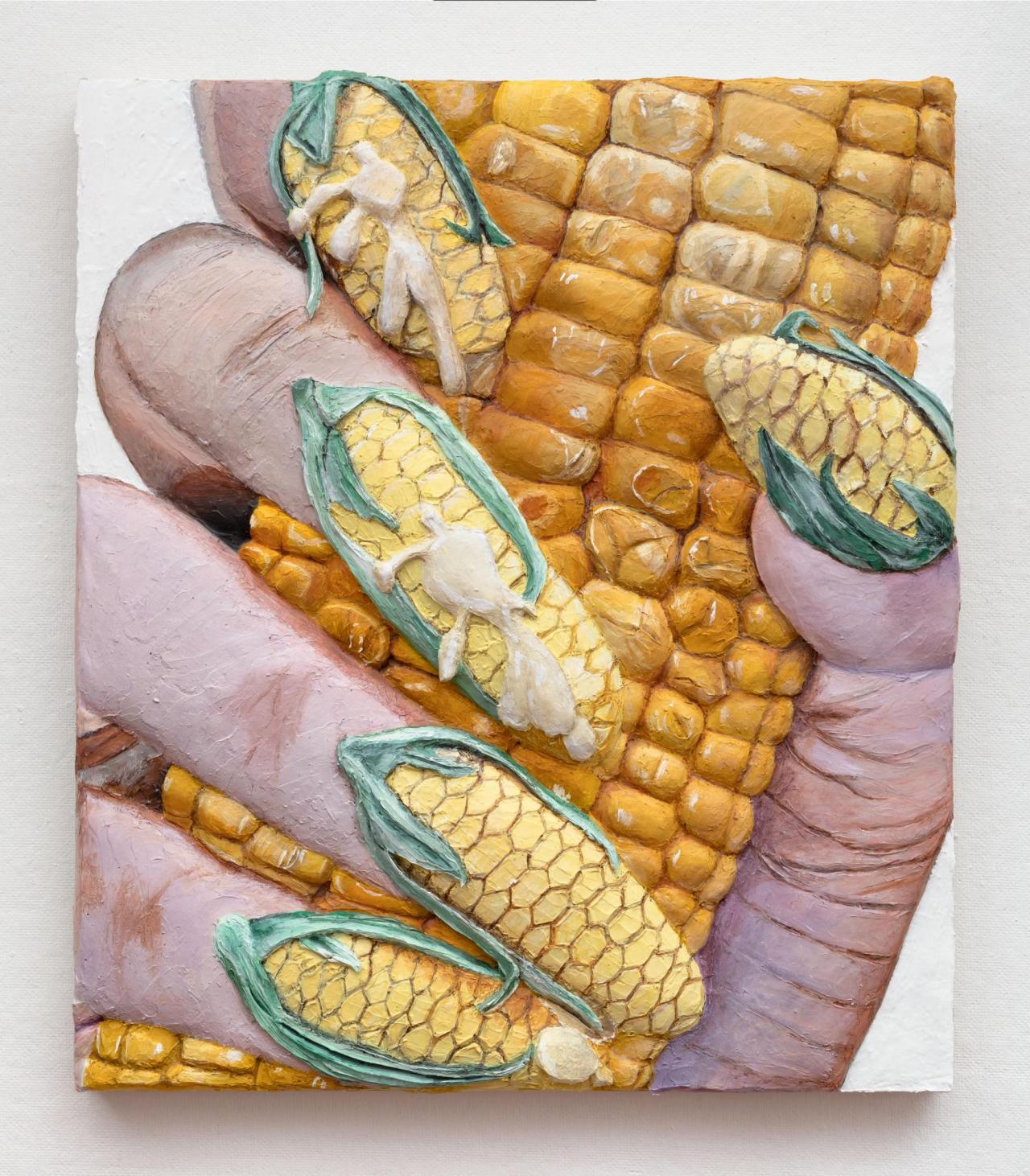 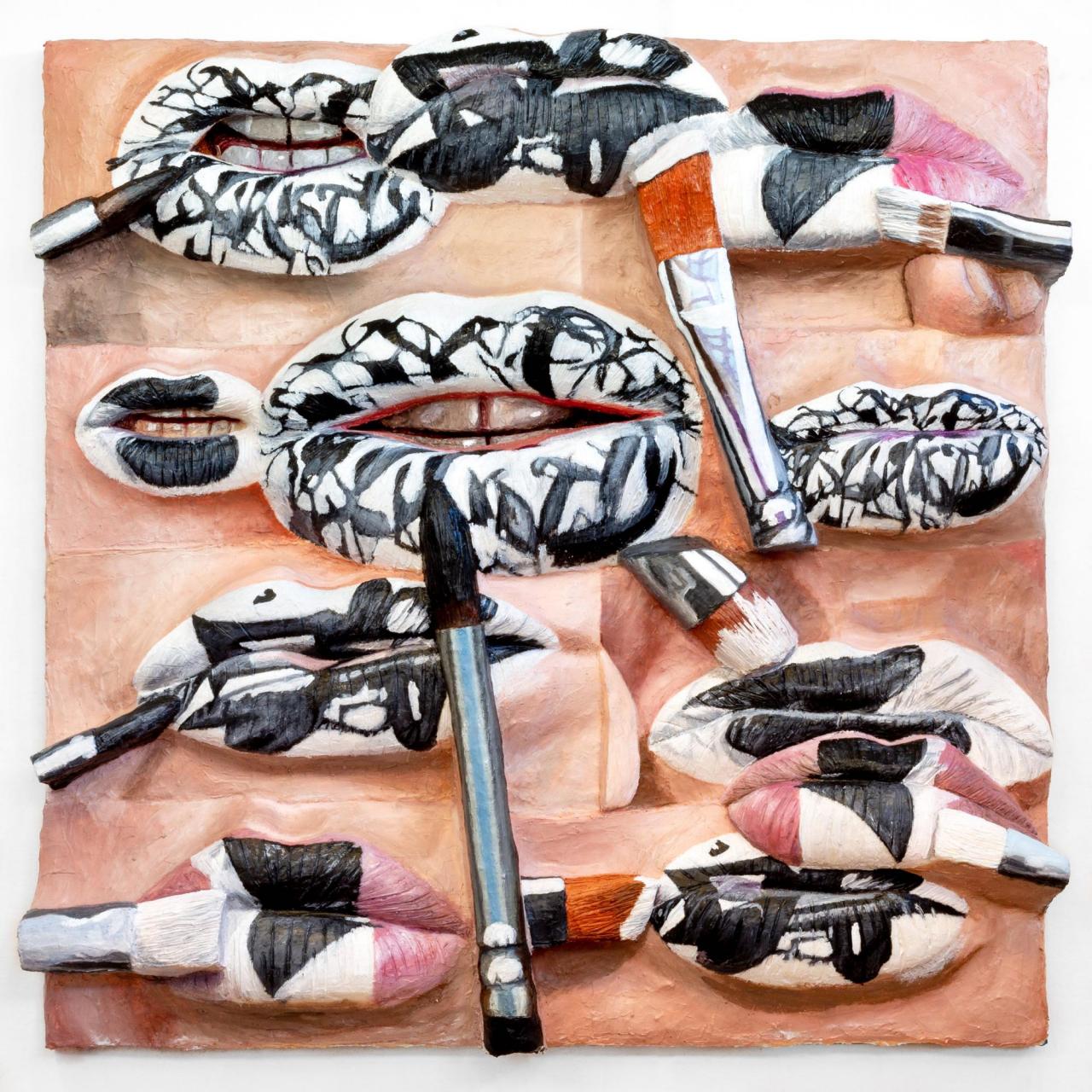 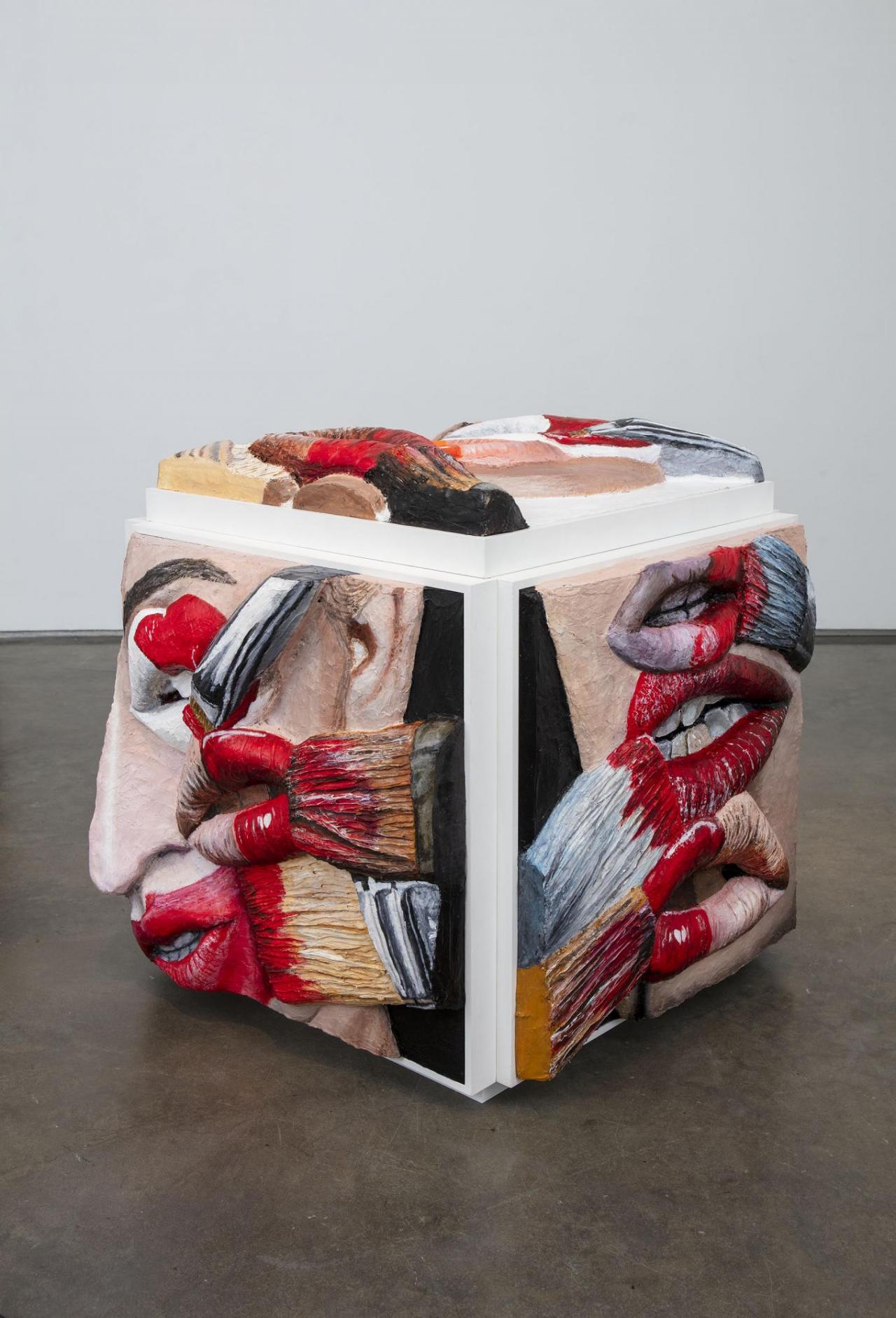 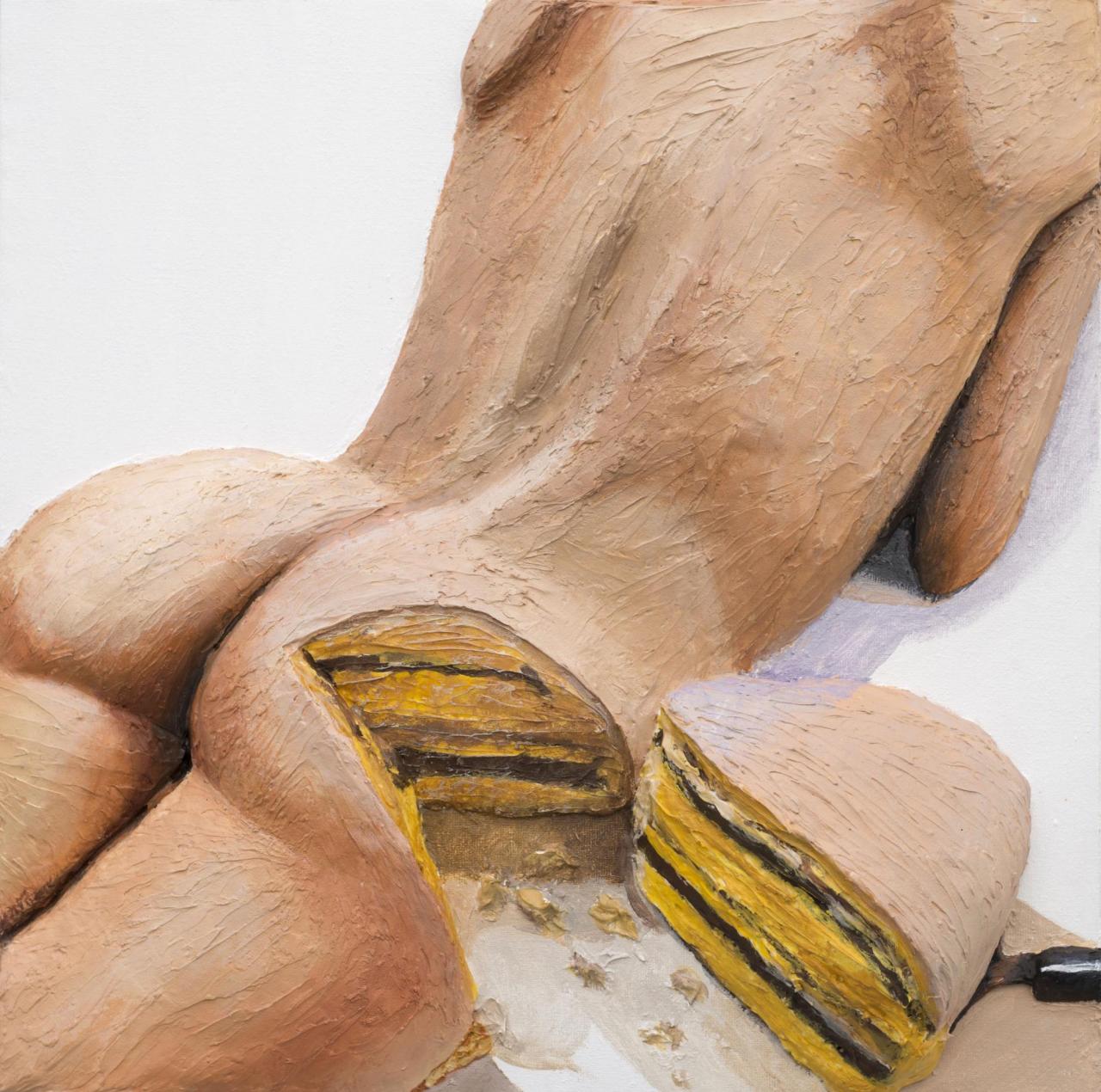 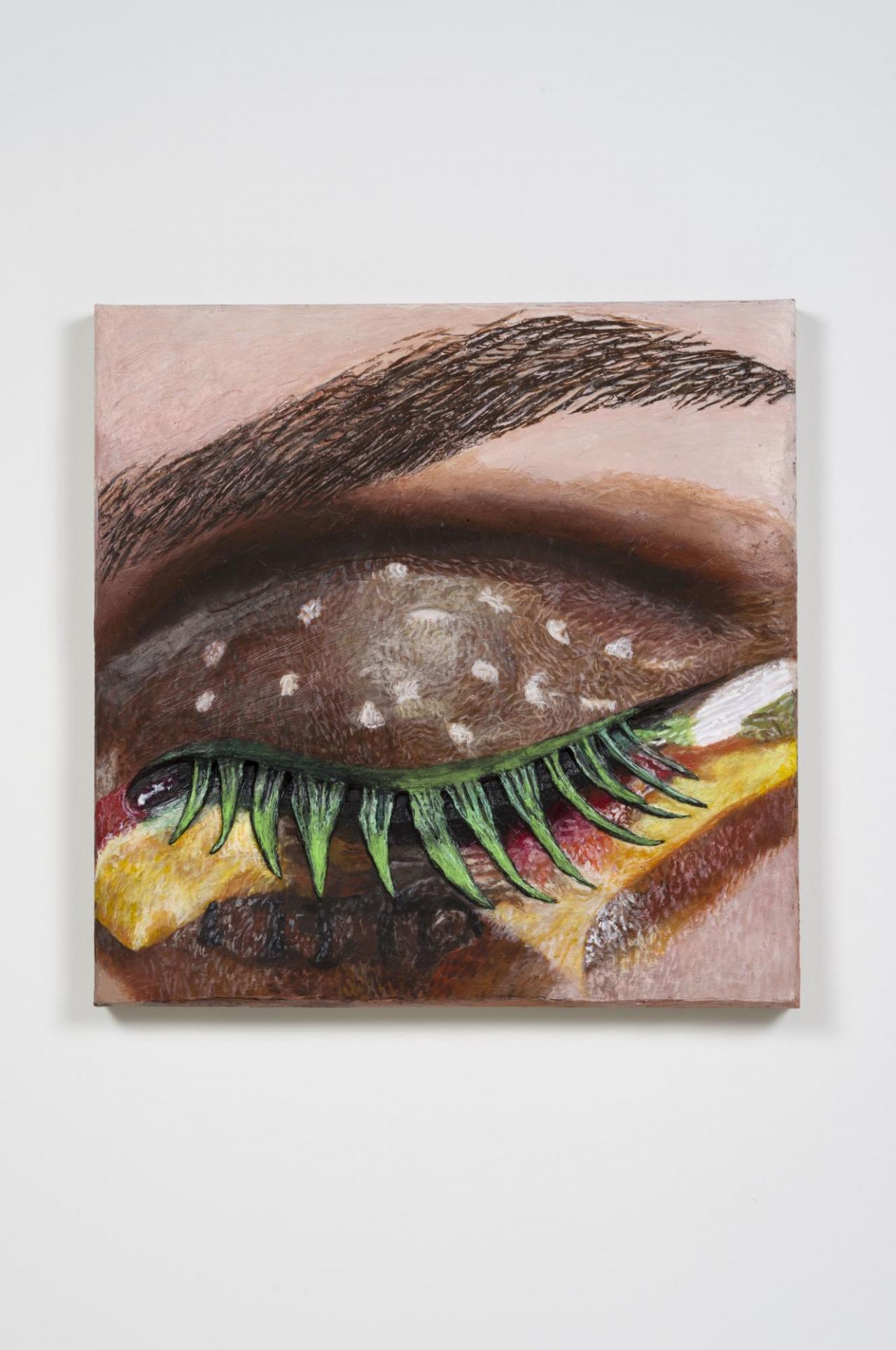 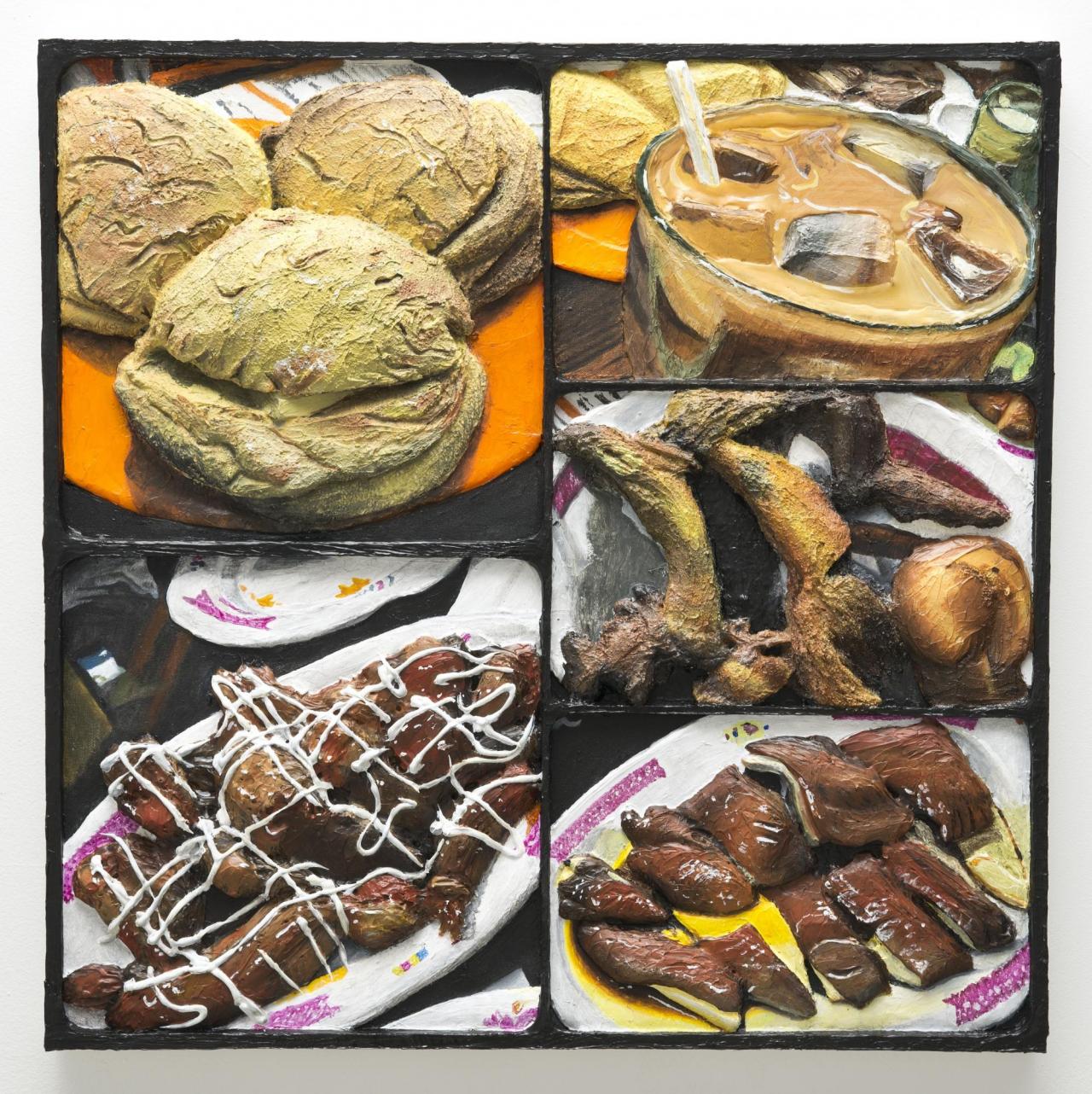 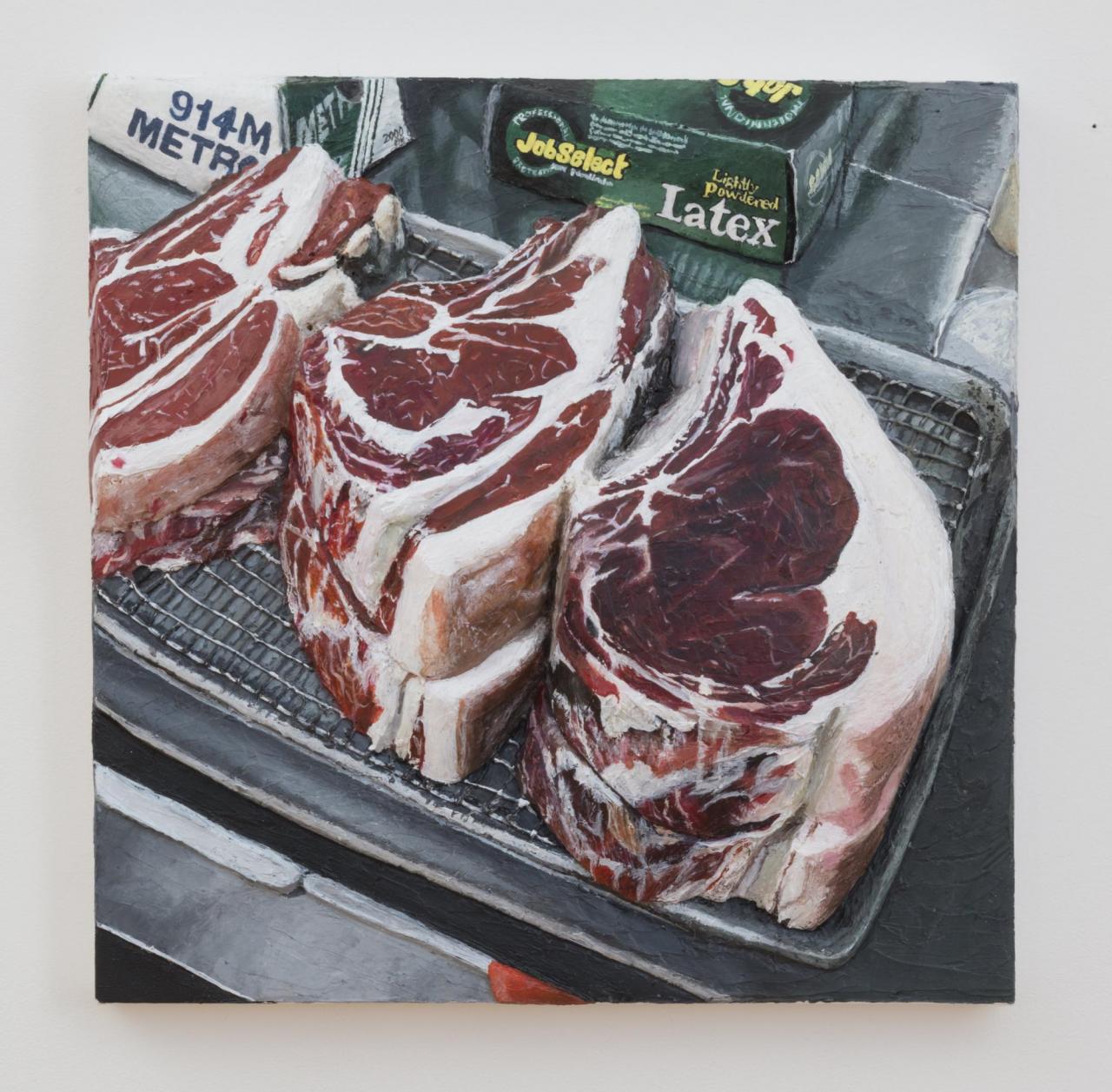 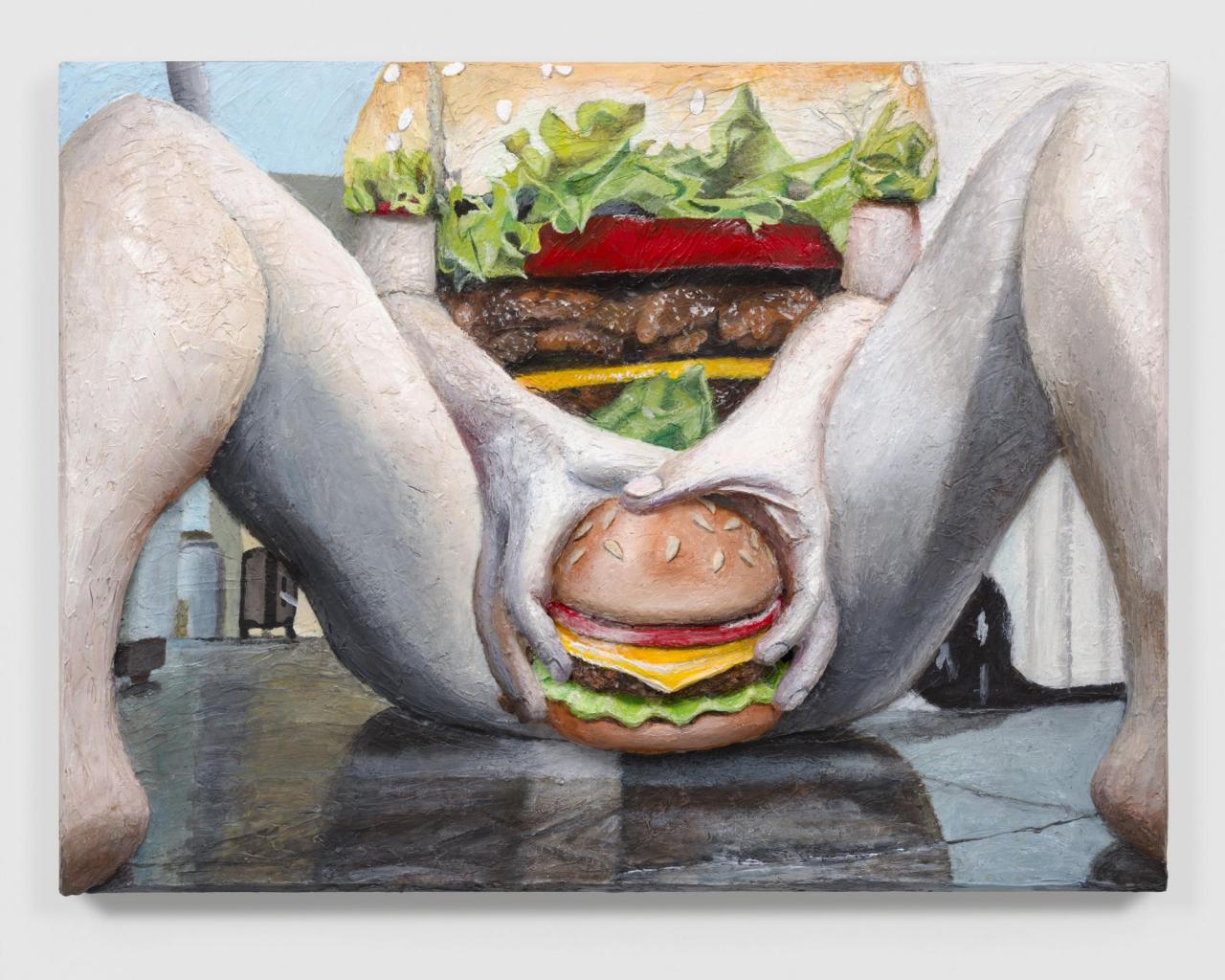 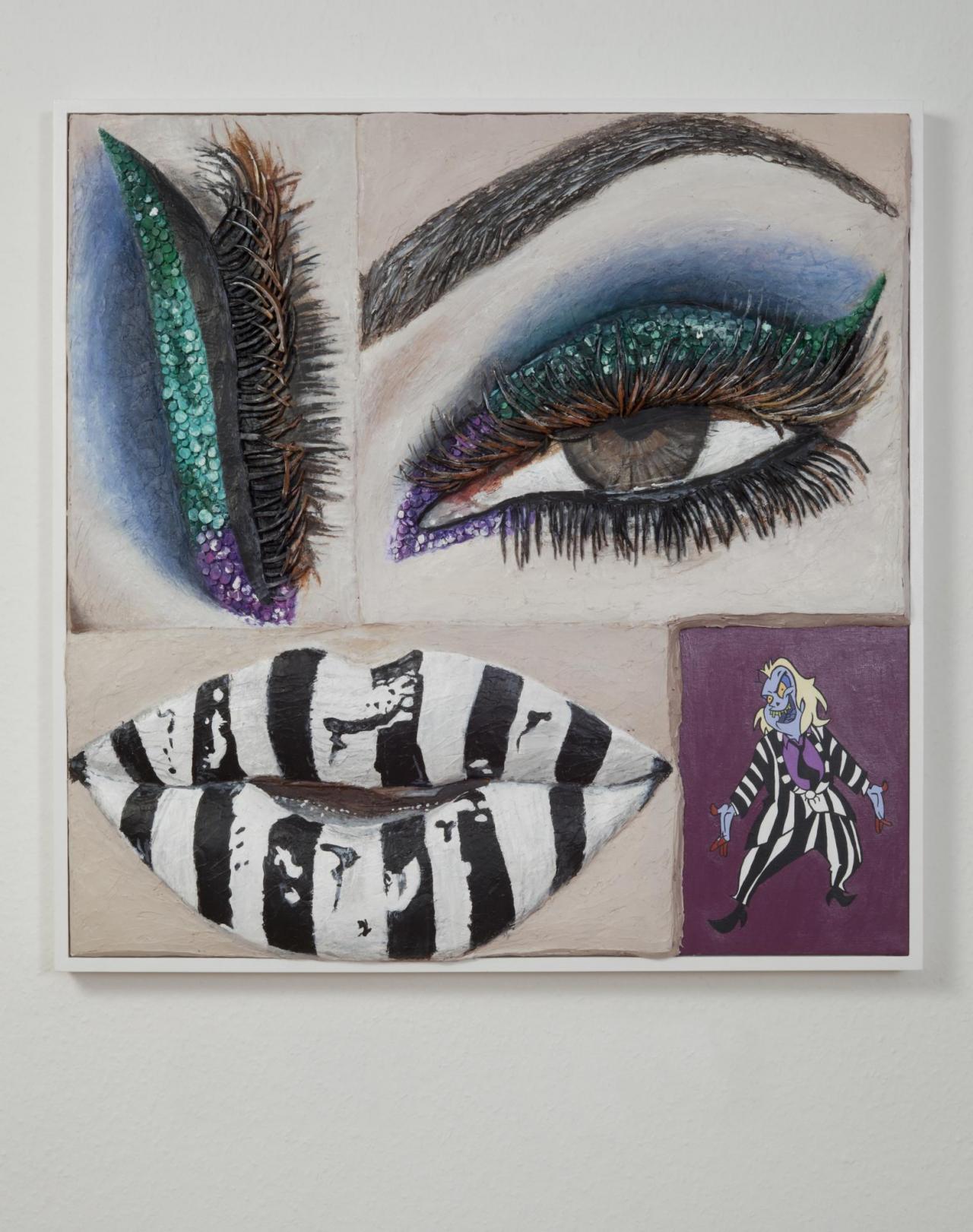 Camila McHugh: Can you tell us about your relationship to Instagram? Do you get sucked in or is your image search deliberate?

Gina Beavers: I used to get sucked in more! The algorithm basically only shows me “fine” art now. I go to the search page if I want to discover new things. For instance, I just went to see if that page was called “search” or “discovery” and saw a picture of Demi Moore and Evan Rachel Wood at a Dior show – thought that Demi Moore’s skin looks better than mine and she’s like fifteen years older than me! Then I went looking for Evan Rachel Wood’s account (private with 600k followers), requested a follow (have been catching up on Westworld) and found the account for the musical duo she’s in and watched a couple videos (they do underwhelming covers of late 1960s rock). So I would say my use is pretty random and meandering. I will screenshot things and keep them in a folder and when I’m making new paintings I will go back through the folder and see what comes up. Right now everything is in a folder mislabelled “more ideals”. It should be “more ideas”, but I keep it.

Tenzing Barshee: More ideals! That’s a good segue to talk about the transition these images are going through. From the flatness of your computer screen, the images transform into quasi-sculptural painting-objects. What happens there?

GB: It’s interesting because flatness often comes up with screens, and I think historically the screen might have been read like that, reflecting a more passive relationship. That has changed with the advent of engagement and social media. What’s behind our screen is a whole living, breathing world, one that gives as much as it takes. I mean it is certainly as “real” as anything else. I see the dimension as a way to reflect that world and the ways that world is reaching out to make a connection. Another aspect is that once these works are finished, they end up circulating back in the same online world and now have this heightened dimensionality – they cast their own shadow. They’re not a real person, or burger, or whatever, but they’re not a photo of it either, they’re something in between.

CM: The images also seem to undergo a transformation which reveals a kind of creepiness or almost repulsive aspect to images that were originally intended to be “appealing” in some way.

GB: I’m really not sure about beauty at all. It seems like a fleeting thing. You find it when you’re not looking, and things that you once thought were beautiful may have no effect on you later when you see them again. I’m aware I’m working from images that are about a kind of manufactured “beauty”, but I don’t see that as the same thing as true beauty. I’m as interested in the abstraction of the tutorial form, of the face split up into sections, and the idea that the painting might be trying to teach you some- thing. I honestly don’t know how to make something beautiful or elegant. Sometimes I will start out thinking, “Oh this one’s gonna be so elegant!” and then it fails miserably. I think simply about the process of trying to re-make the photographic image as faithfully as possible. I fail because of my own limitations with my clunky human hands and make something uncannier.

TB: Can we talk more about photography? Are you interested in other types of photographic reproduction?

GB: Photorealism is important to me as a painting language. The light, the reflection feels like the most truthful way to depict how we see in this other world we inhabit, and also signals to the viewer that the painting is of that space.

TB: I wanted to return to what you said about Instagram and how the images assume a form of depth as they are experienced socially. You described how reproductions of your works are fed back into the loop. Does this influence how you think about authorship?

GB: The question of authorship is a super-interesting one. For a long time I saw myself as operating from more of a documentarian space, appropriating and re-presenting, maybe more of a Duchampian attitude. There’s no judgment. I’m as implicated as everyone else and the images I select often relate to me in some way autobiographically.

The effect of my painting is less heroic, it’s not trying to be better than you, it’s more wanting to be liked.

I would describe the voice in the memes I’ve started making (as opposed to appropriating) as trying to be “liked”. Someone called one of those paintings “thirsty”, I think the effect of my painting is less heroic, it’s not trying to be better than you, it’s more wanting to be liked. Maybe trying too hard to be liked. This was definitely the thought I had in mind when I began the make-up tutorials. I liked the idea that the painting was drawing and painting itself, while also teaching or demonstrating. And in the end, it really wants you to like it.

CM: There is something softer about seeing self-improvement à la make-up tutorial as a desire to be liked, revealing a persistent sense of inadequacy as this vulnerable under- belly to the culture of self-optimisation. That idea of trying too hard to be liked, also as a way of setting oneself up for failure, is interesting to consider with regard to what you said about how your painting often emerges from “failing miserably” to make something elegant.
Last week I was reading a lecture by the LA-based abstract painter Rebecca Morris, where she concludes by declaring, “Smother me with failure so I can charge back up and out again!! Oh the high.” Could you elaborate ?

GB: Rebecca Morris is awesome!
I used to be really afraid of failure in general, but I taught art full-time at a public K–8 school in New York for twelve years. As I started teaching, I failed so much and so consistently for years that fear was really burned out of me. If something goes badly, right away I ask myself, “What can I do differently next time?”. And I usually forget any of the day’s failures overnight.
When it comes to painting, I guess it’s easier to talk about when I feel successful, when there’s an uncanny likeness to the original image I’m working from. When there’s a more layered narrative in the finished piece than I originally foresaw. So the flip side of those successes would be a spectrum of failure for me. The failure is really in an attempt to re-make the original photo, or Photoshop image, exactly, and fail to do so. Humanness intruding, I guess. But I am not distraught over failure in any case. I’ll just move on to another idea, another painting.
I also wonder how the idea of failure dovetails with shame. I’ve been thinking about how much of the Internet is about shaming and at the same time people being completely shameless. If shame is completely eliminated or the stakes are low, it’s difficult to orient the meaning of failure in relationship to that.

TB: Looking at your works, I pick up on an attempt to illustrate a relationship to desire. Blown out of proportion and distorted, your pieces physically represent the magnitude of obsession for a desired object.

GB: I like that idea. At the same time, desire is kind of hard for me to think about in the context of the sources I’m pulling from because the idea that these images often originate from a platform that is always about showing off maybe screams louder. Is it about eliciting desire and envy? “Look at the great things I have or do” is the context for everything. In order to enact true desire online, you often have to make yourself the subject of the photo, putting the result in a more unpredictable space.

TENZING BARSHEE is a curator and the programme director at the Berlin gallery Efremidis. CAMILA McHUGH is a writer and curator based in Berlin.

– This text also appears in Spike #63. You can buy it in our online shop –