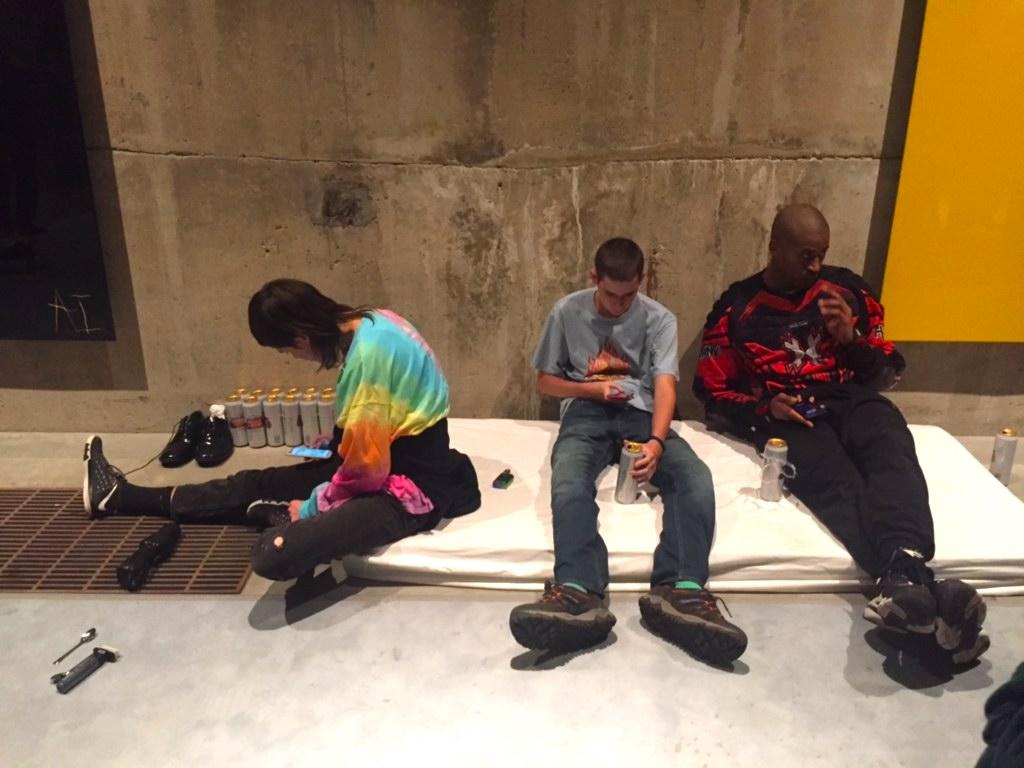 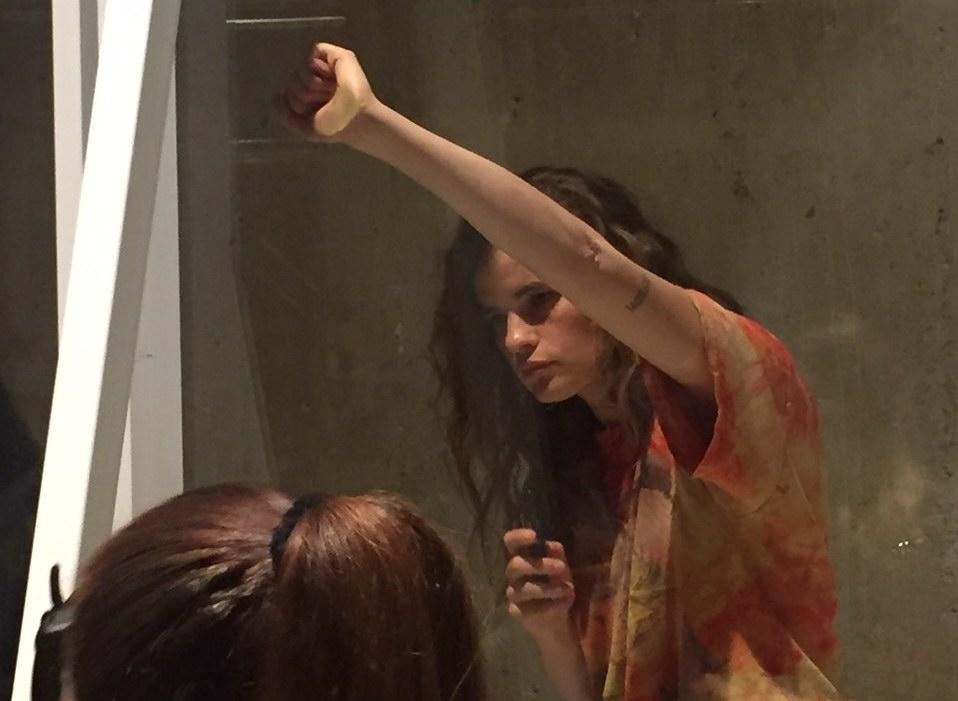 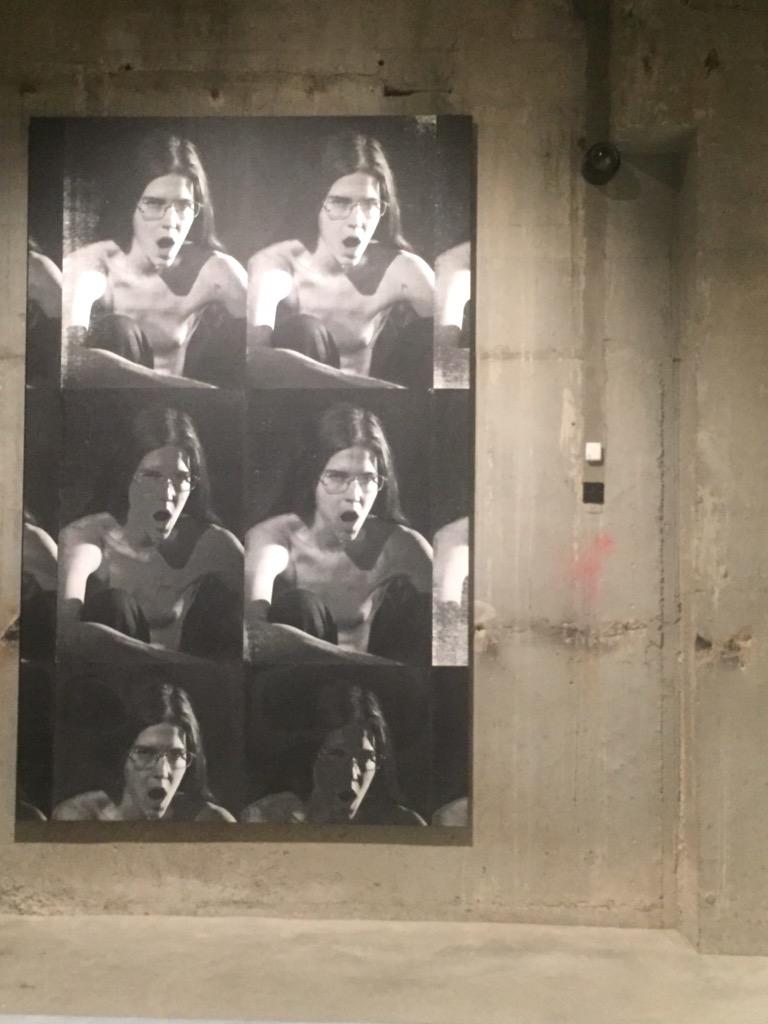 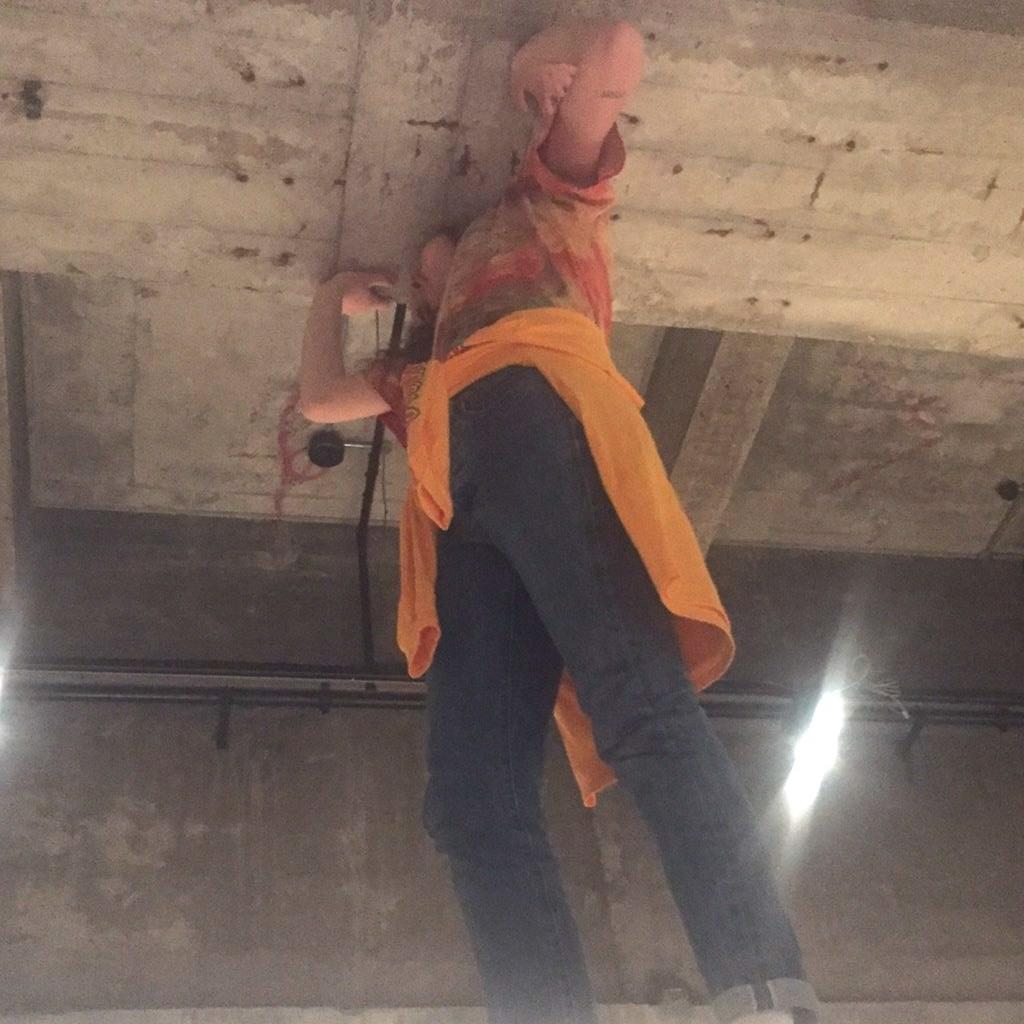 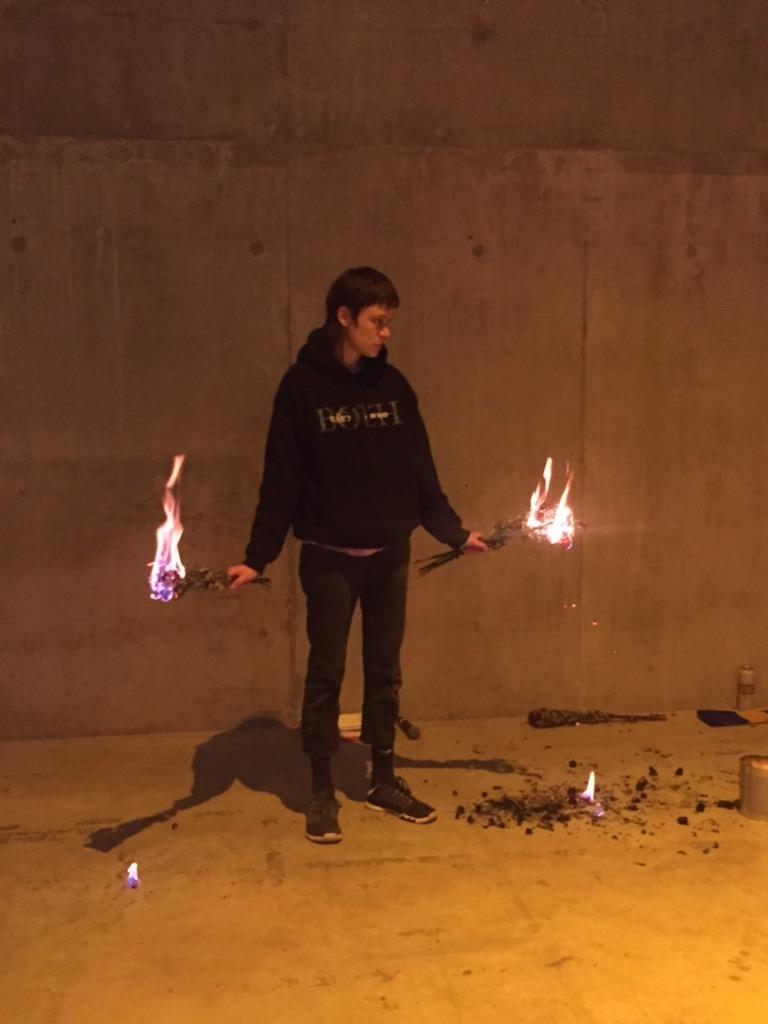 Sixty or so other journalists are stood upon a jetty listening to a woman telling them – just two days before another Brexit march– that “the networks still hold”.
“We remain staunchly European” said Tate Modern’s director Frances Morris last Thursday morning. And yet, whether we remain or stay we cannot stop being an island. Until the sea swallows us up again, we will always be a slash of mainland gone adrift. It was a wave that broke us, some 8000 years ago and it is a wave that threatens to break us again today.

Once seen from this vantage one cannot unsee the maritime imagery (and the tragedy of places where no isles meet) across German artist Anne Imhof’s new body of work “Sex”, comprised of three rooms of sculpture and wall works accompanied by a four hour performance staged in the Tate Modern’s tanks space. Besides the jetty the rearmost tank room holds three platforms resembling diving boards or lifeguard stations and there are two others in the switch room. In the second tank a timber pier lurches through the space above a crowd that parts and swells as performers act as currents in a sea of people. And as I watched two beautiful boys eddy around one another to the sound of Eliza Douglas’ mournful siren song and a lilting string refrain from musicians Billy Bultheel and Ville Haimala that would stay with me for days, I felt something move in my own depths. Imhof has described the piece as being about dualities and “how things merge into each other” but the work as a whole is permeated with some melancholy mirror to Freud’s “oceanic feeling”. It is, perhaps, an elegy.

“Sex,” as curator Catherine Wood explains, “is a big word”, both “heavy” and “meaningful”. The weighty act it describes can even feel like drowning (in the other, in sensation) and the original title for the piece was “Death Wish”.

“I have the feeling it still lingers somewhere” Imhof told the assembled journalists that morning. Parts of her four hour epic make it hard to tell whether one is adrift inside a sunken ship or in some cavernous shadow of Berghain but the plane the work conjures is certainly the endpoint of some murky undertow. Objects used by performers are strewn across the space like the outgrowth of an adolescent’s bedroom reef: dead flowers, a guitar and amps, mattresses, stained carpets, smoking ephemera, cans of Stella and a coralline growth of heavy metal tees encrusting a wall. At the heart of this dreamy wreckage lies something dark and defiant too. It’s in the marred glass riot screens fringing one of the tank’s curves, (“I think it’s about the same height as “The Wall” a friend from Berlin murmured) and in certain gestures and expressions of hardness in the performers; for instance, artist Eliza Douglas singing the law of talion into a funeral dirge – “a tooth for a tooth/an eye for an eye/what is dead can never die”. Volatility hums through the work and these gestures become “a nice way of talking about things that are actually too abstract to talk about” as Imhof puts it.

After the short press preview I immediately wanted to surface, to take the escalators up and out of the building towards the real brown Thames but I came back that evening for the opening reception and a couple of hours the following night too. I wanted to see if there was any contrast, if different swimmers might take different routes back to shore. I also wanted to really lose myself (and any preconceptions) to the piece, which was tricky since Imhof’s rise has been difficult to ignore. Her strong choices in casting and choreography are good at drawing the hungry gaze of the screen and from winning the Preis der Nationalgalerie in 2015 to taking home the Golden Lion for Germany at the 2017 Venice Biennale, it’s no surprise I hear her name so often: So, people ask, what do you think of Anne?

As often as I am asked my opinion I am given it too and Imhof’s same screen appeal draws salt as much as praise: one friend called her work “immersive moodboarding” while another condemned what they’d seen as “white mediocrity with a queer band-aid on it”, dangerously “vintage” disaffection and “queerness as like a polite asexual 'fashion' thing”. Neither were at Tate for this one but another friend who was in attendance told me that he was convinced the opening night of “Sex“ would contain a surprise Balenciaga capsule collection to be found splashed all over the style press the next morning.

This didn’t come to pass although the opening night did churn with contemporary fashion, music and art’s best buoys, from Hans Ulrich Obrist and Arca to stylist Lotta Volkova and a flotsam of Balenciaga models, CSM students and fashion hags like myself. Friday’s viewership was calmer and less Instagram-anxious, more Marks & Spencer than Margiela; although I spotted Jefferson Hack and a sweetly elated looking Juergen Teller bobbing about in the crowd too. Eventually I had to admit that it’s impossible to divorce the audience or the “scene” (and it’s digital ghost) from this work. They crest and merge then part again.

At a certain point watching the performers and fellow audience members (and likely mirroring their careful blankness) I thought (as I often do) of how haunted my generation is by the fact that the interfaces we used to know ourselves through might once have been the faces of others. That sex (with partners at least) is one of the last slippery places we can go to forget who we are away from the tyranny of the screen. Where we aren’t unavoidably quantified into performance behaviors, habits, interests, pathologies, imagery and other dross miscellany. Where we might be our most vulnerable or most monstrous essential selves...or simply disappear into the swell.

At the end of “Sex” I guess I felt what I was supposed to feel and that was nothing. Empty, dead, bled dry. The next morning all that remained was a five note violin refrain and the smell of burned roses.

ELLA PLEVIN is a writer and contributing editor for Spike based in London. Her online column“Now Zero” is published every last Wednesday of the month.